When I finally do what frozen things do in summer

So, the cold. I think I mentioned it was cold. It's not been as cold for as long as it was last year, when we went something like forty days without breaking above freezing, but we have had a couple days of not getting out of single digits (Fahrenheit), and that gets old fairly quick. Fortunately we haven't had to go out for very much, but it does mean we're trying to load all ``reasons to go outside'' into the days when it gets up to, like, 18 degrees.

The pond heater has been nearly holding its own against temperatures dropping to minus 10 F and colder, though I have had to go out with hot water to free it a couple times. Underneath the disc yesterday had been this gorgeous little complicated circular cylinder, like an ice sculpture of a particularly stylish flying saucer. I tossed it to the side (still on the pond), where it sits, because it kind of melted into the ice cover. 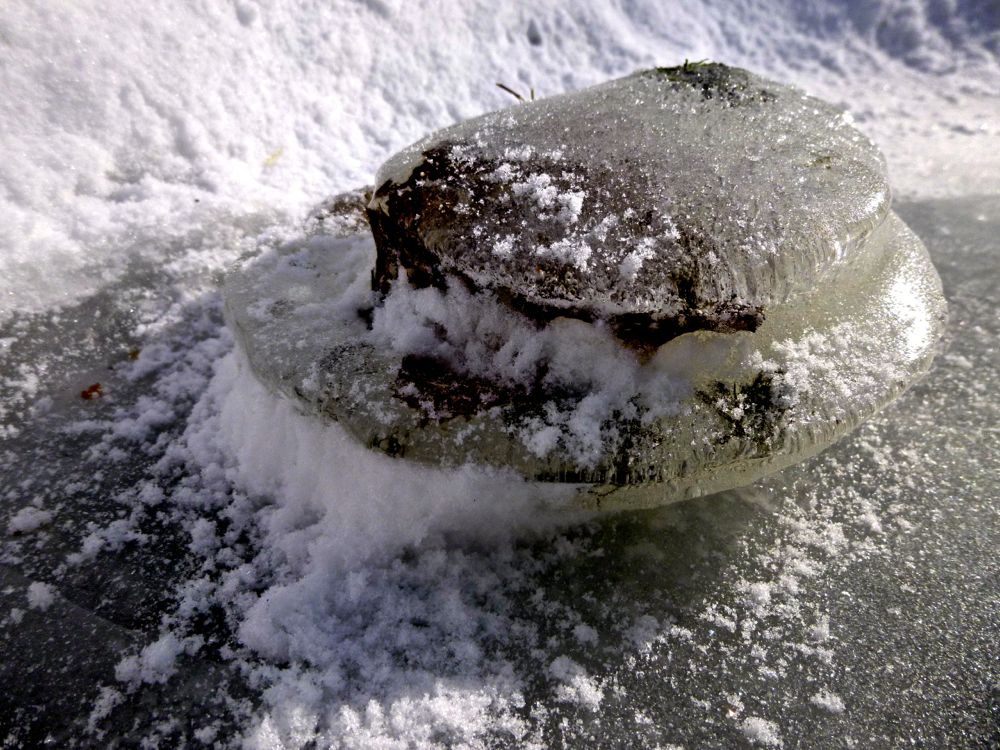 Did Ancient Astronauts voyage to our fish pond to mess with the heater? The world may never know.

The ice atop the pond is, besides pretty thick, building up to a little mountain around the pond heater and I've wondered about that. I would like to get a thermometer and see just how cold the pond water is; I've wondered if what I'm seeing is the water getting cold enough that it starts expanding again, and since the pond is otherwise covered with ice the only place the water can go is to seep out around the heater, at which point it freezes, producing a mound that elevates the heater and creates a neat little ice volcano. This theory seems plausible enough except then why wasn't it doing this so I noticed last year? Or did I notice and not think of it?

Trivia: In 1890 Richard Sears persuaded A C Roebuck into buying Sears's mail-order business, then called the Warren company (Sears's middle name), and retired. Sears came back to Roebuck in less than a week to buy a half-interest in the business and become President. Source: The Grand Emporiums: The Illustrated History of America's Great Department Stores, Robert Hendrickson.

PS: How To Re-Count Fish, first of these since the last roundup, a mathematics article about some of the challenges of estimating fish populations.