Cause the weekend is beginning

And now back to the waning hours at Conneaut Lake Park's Pumpkin Fest 2015: 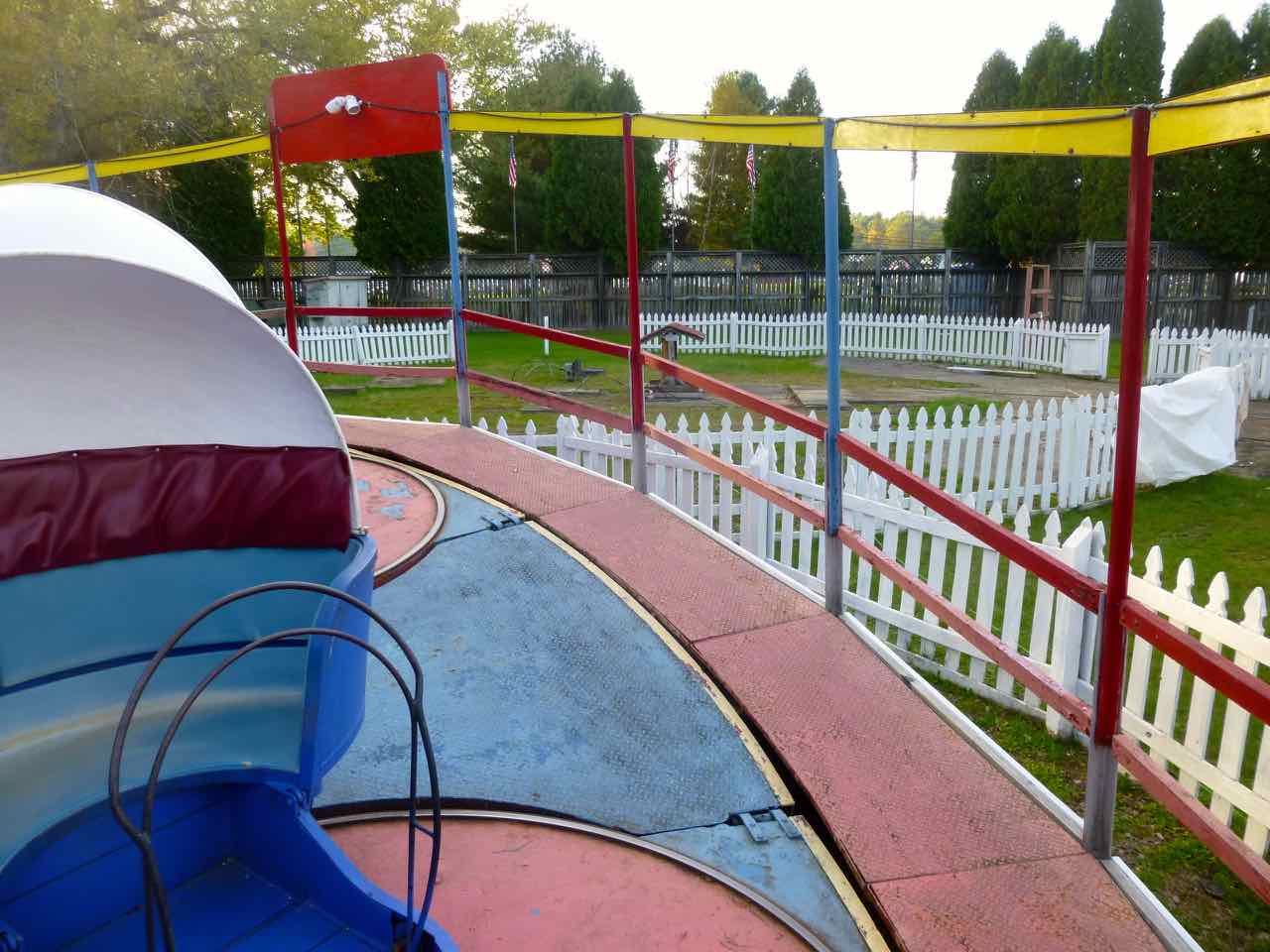 Have you ever seen a Tilt-A-Whirl this old? Not one that's operating, at least if the Travel Channel program that featured Conneaut Lake Park is correct. The ride had been out of service for years, certainly on our last two visits, but it was back when we visited for Pumpkin Fest. The mechanism reportedly dates to the 1940s. In the background is the footprint for some other, removed ride and I have no guesses to what it might have been. 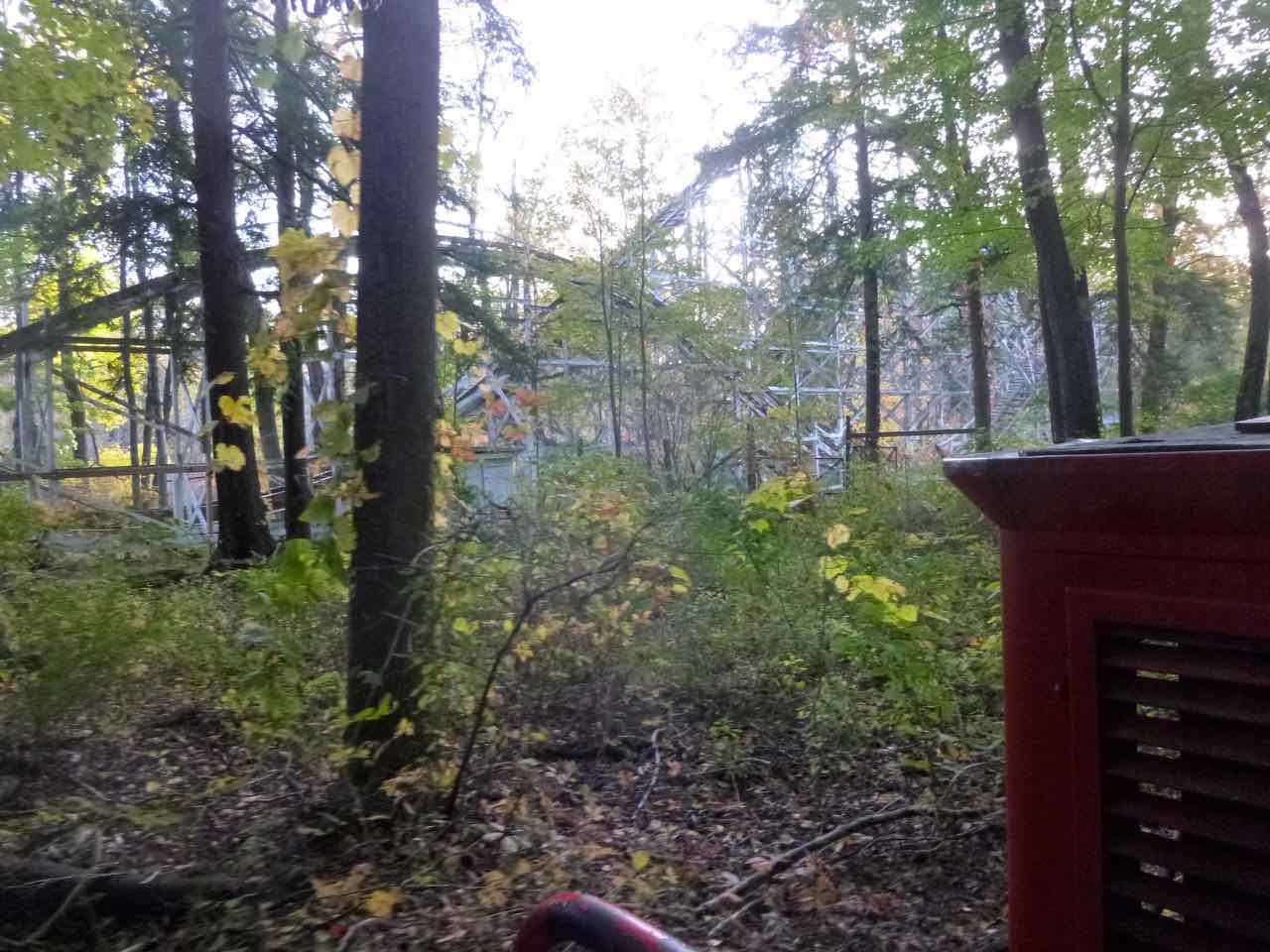 From the train! The Bessemer train ride has an antique engine and cars, and had been nonfunctioning when we visited Conneaut Lake Park in 2013 and 2014. The ride was also down some of the day when we visited, but it got running again just in time for us not to give up and get the last ride before the park's closing hour of 6:00. Here, we get to see the Blue Streak roller coaster in the woods behind. The roller coaster train's on the lift hill. 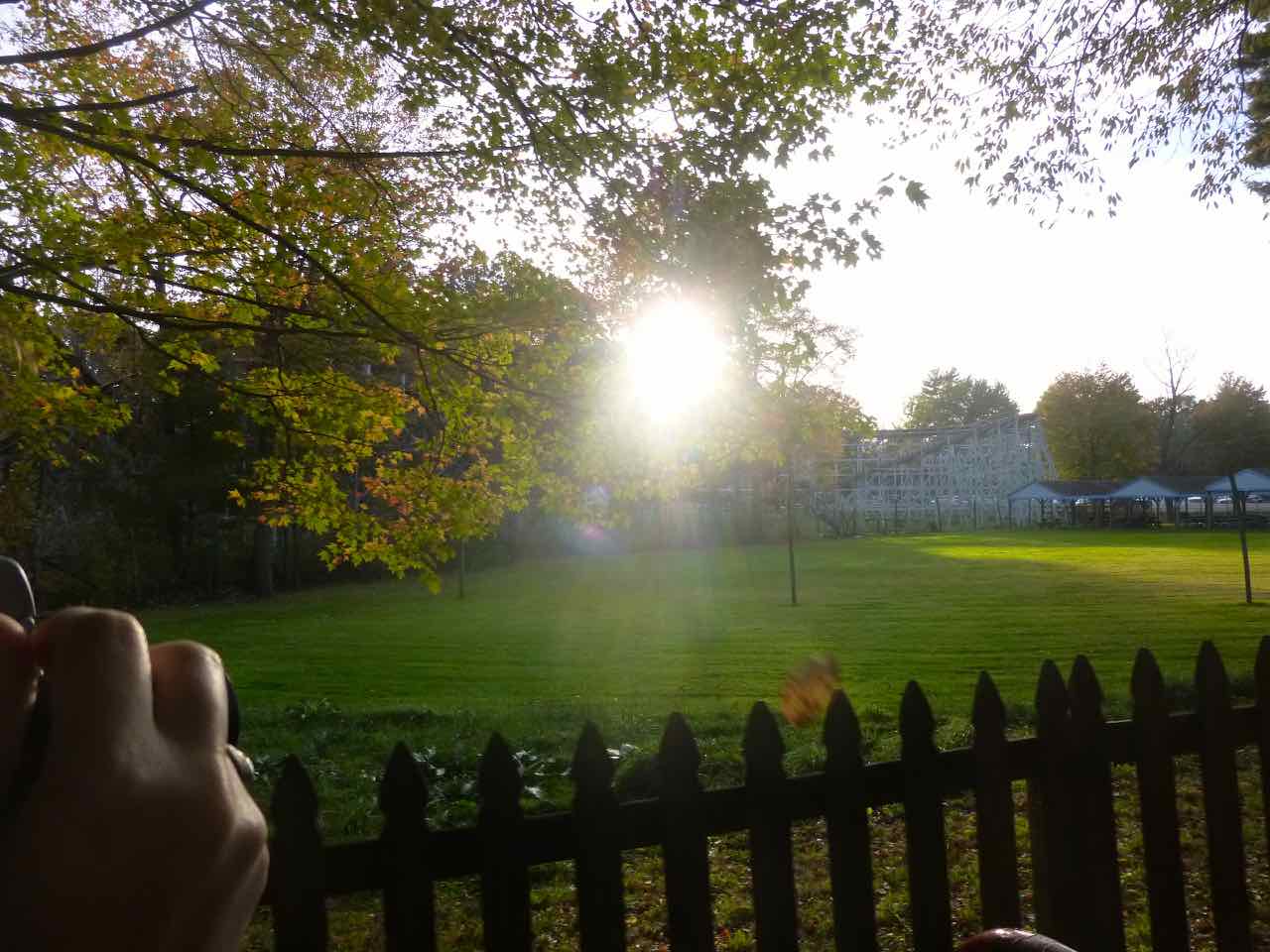 Sunset over the Blue Streak at Conneaut Lake Park. Also some of the (many) picnic pavilions, as seen from the front seat of the train. 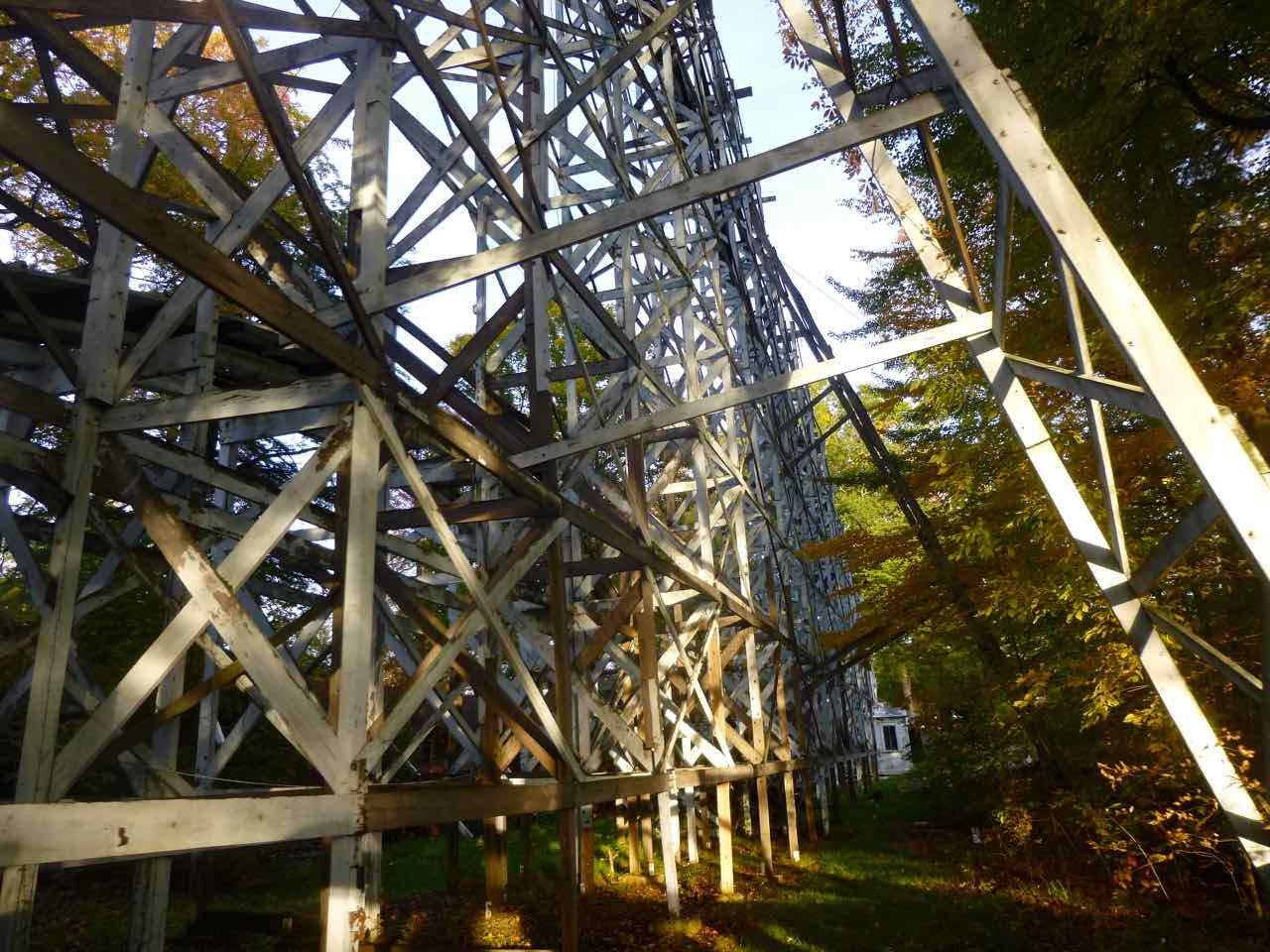 The Conneaut Lake Park train goes underneath the support structure for the Blue Streak roller coaster and sometimes you're there at exactly the right time of day and the right time of year to get light and color like this. 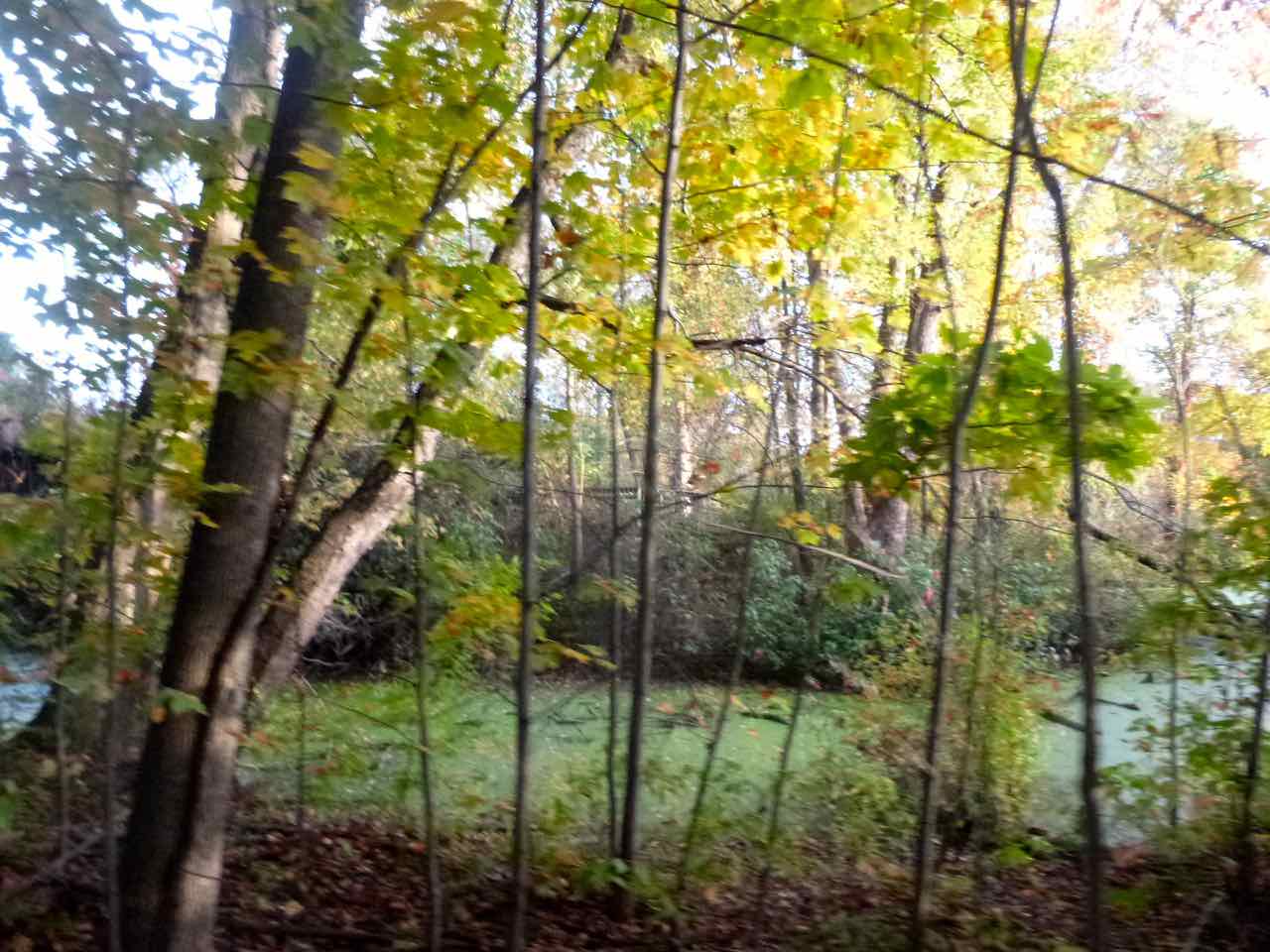 View of the spooky abandoned island. Conneaut Lake Park used to have some attractions, including apparently animal shows, on an island across the swampy water here, but it gave up maintaining that decades ago. So if you want to thrill to that abandoned amusement park chic --- well, don't go there because they've got enough troubles. But if you look really closely at just below the dead center of this picture you might make out some of the wooden walkway through the island. Picture taken from the train ride during a stretch when it had backed up and was trying to build up enough of a head of steam to get up the slight gradient towards the station again. 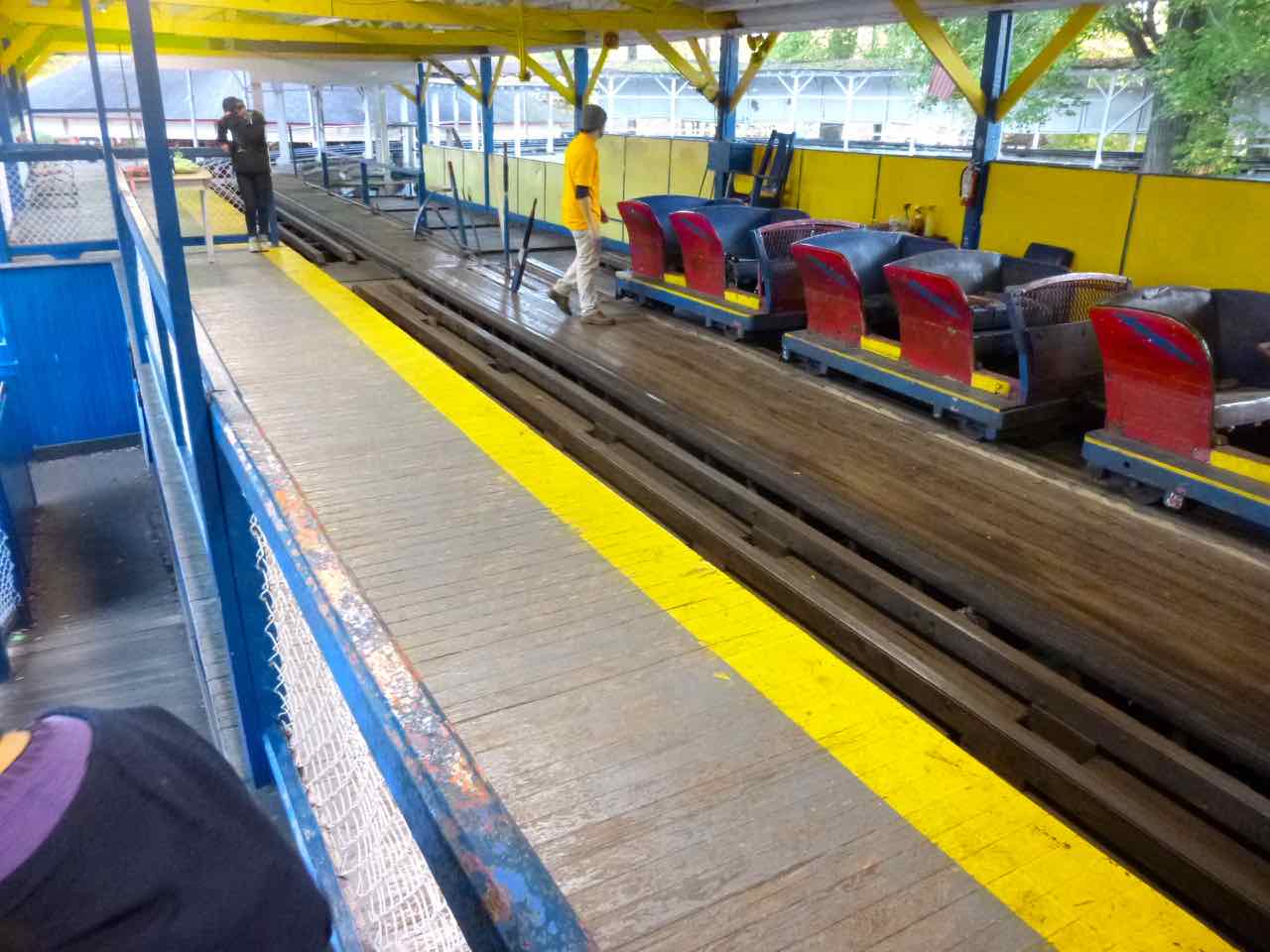 And what we missed in order to ride the train: Conneaut Lake Park had just closed its rides for the day, and the last Blue Streak train for normal operations had just gone. The former train cars, which seem to date to the 1930s, are off on the side there. Those haven't been in use for a decade or so. By the ride operatore are the many levers to run the brakes.