If you're burdened down with trouble, if your nerves are wearing thin

I like encouraging folks to look at my humor blog by treating them with pictures from my big yet poorly uploaded photograph archive. Trouble is that LiveJournal has broken the Scrapbook Album Upload button. I can click it, or its alternate form, but what I get is something that shows me the pictures already in my album and asks me to click 'save images'. There's no help available, of course, because LiveJournal hasn't had any kind of bug-reporting or bug-fixing forum since 2012 at the latest. Heck, even their Twitter account has been moribund since September.

I've found a terrible, terrible workaround. I can start a new post, and upload media in that, and then go back and edit the pictures again. This is at minimum four times longer based just on the number of clicks needed for each and every image. It's broken this way before, but always came back after a day or two. This is the first time it's been broken like this for a full week.

That's all draining my enthusiasm for putting up ten or a dozen pictures a week, though, as you might expect. I realize that given my Social Capital of 13 and my 1,345th place in the User Ratings I don't have any social pull even among the nearly 1,346 people left on LiveJournal. I'm just saying, if anybody knows anybody who could get a bug report sent to anyone who can actually fix a bug, I'd appreciate being hooked up.

Anyway. Humor blog from the past week:

So now let me get to a couple of Halloween and Thanksgiving pictures. I've got more, but most of them are going to make more sense to me and

bunny_hugger than to people outside the family. 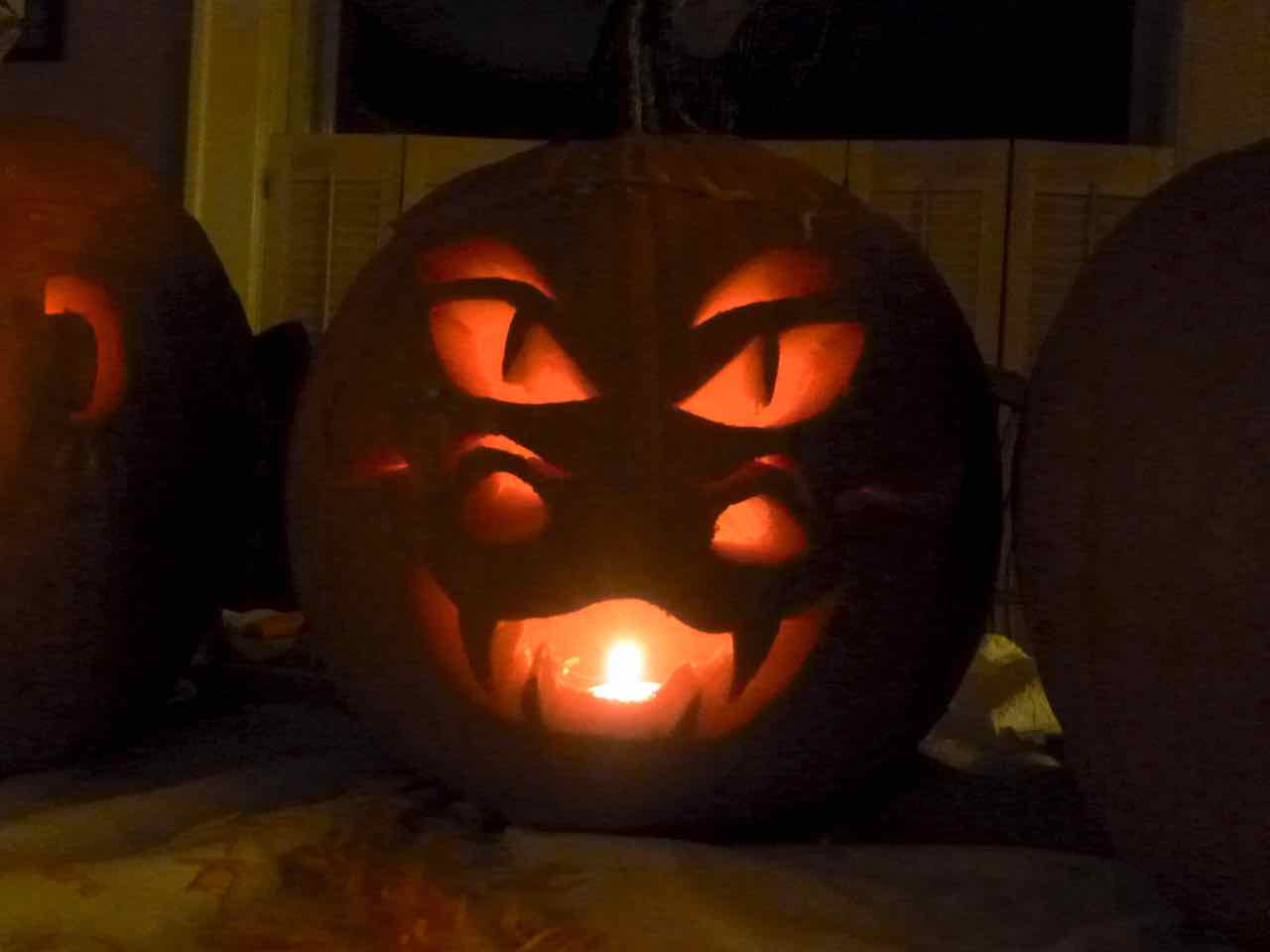 bunny_hugger's jack-o-lantern from last Halloween. It's sitting on the tablecloth we carved on, which adds to the crime-scene look of the pumpkin's surroundings. 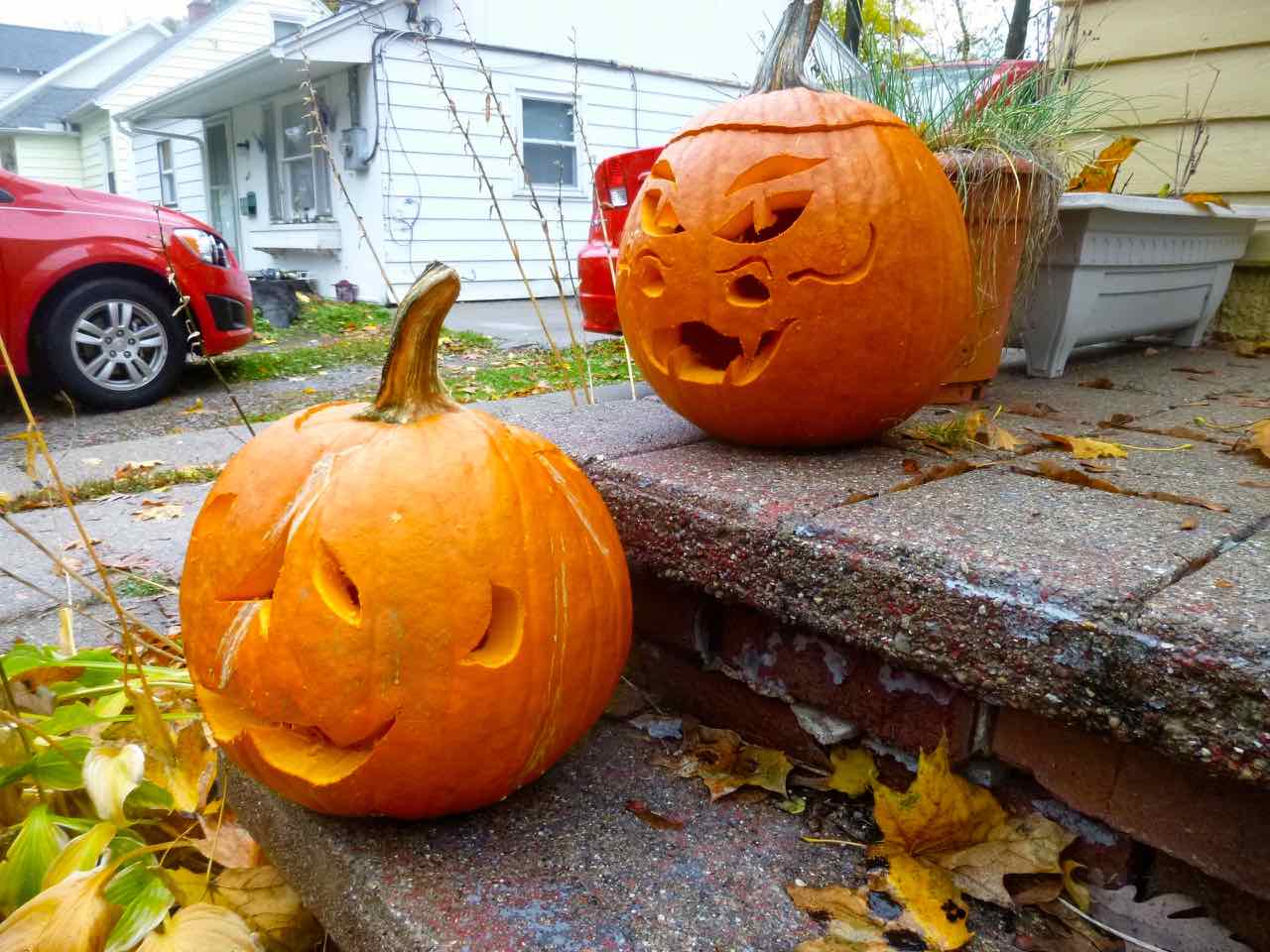 bunny_hugger's and my jack-o-lanterns on the front porch. Hers has got style and craftsmanship on its side, although I like the effect of the weird white streaks along mine. I just didn't do much good with them. I'm sad to say I don't seem to have a picture of the jack-o-lanterns on our steps at night. 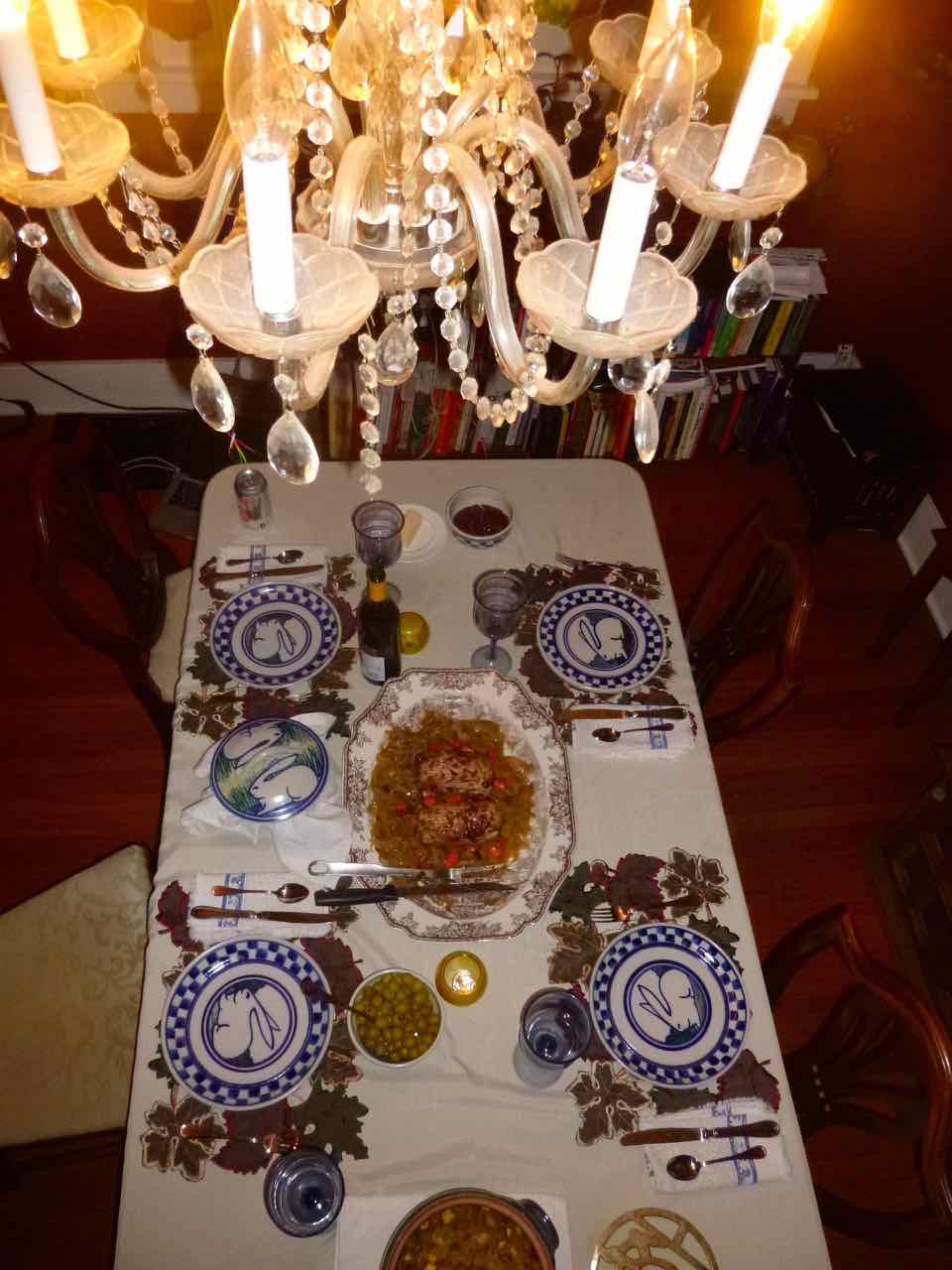 Our Thanksgiving table, with Quorn loaves in the centerpiece and ready for eating. Since the picture was taken we've added another bookshelf off to the right of the table, but it still isn't nearly enough. That's my fault. 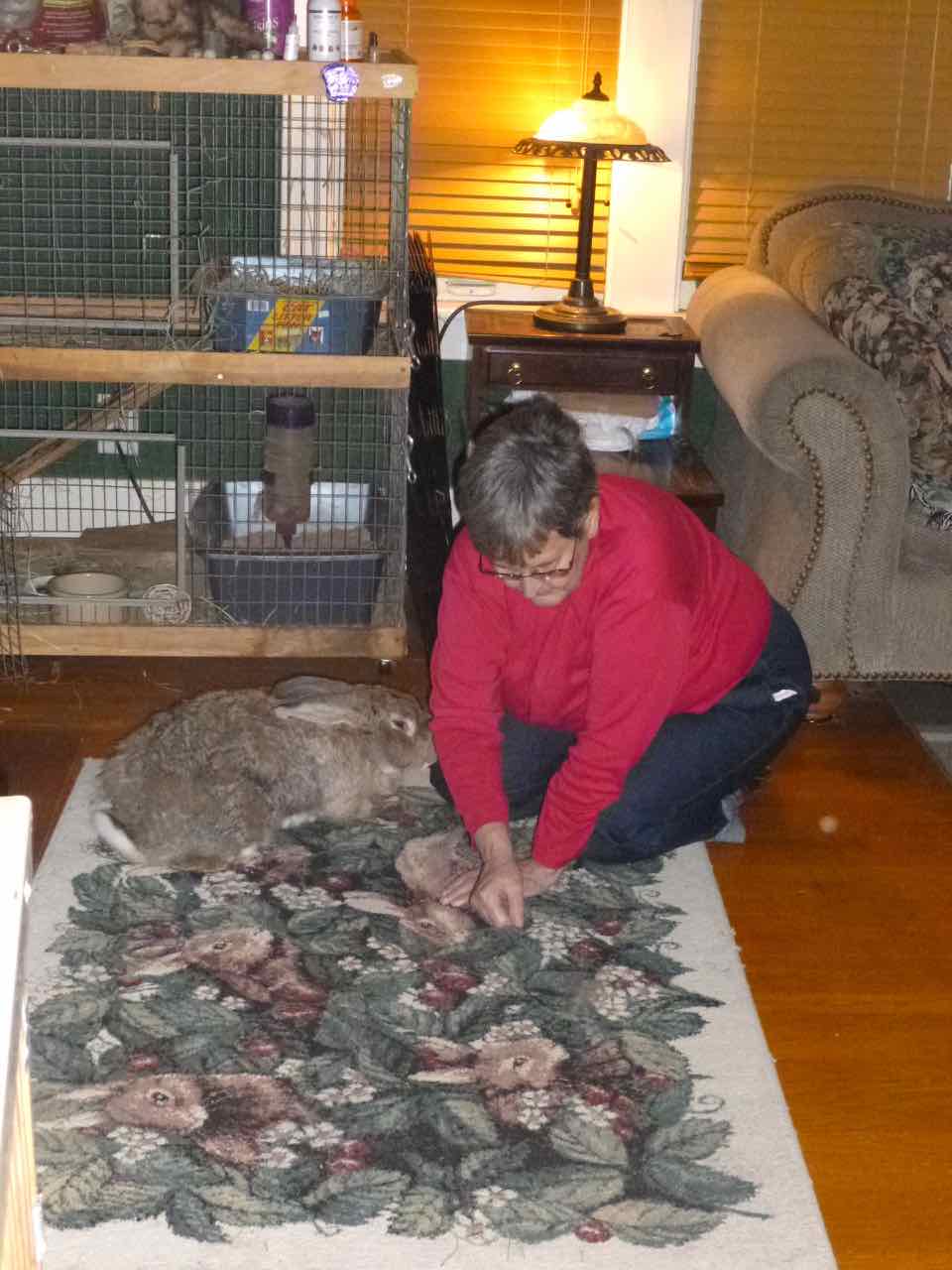 bunny_hugger's mother tries to play with our pet rabbit, but he's camouflaged too well on the rabbit-patterned carpet to be found. 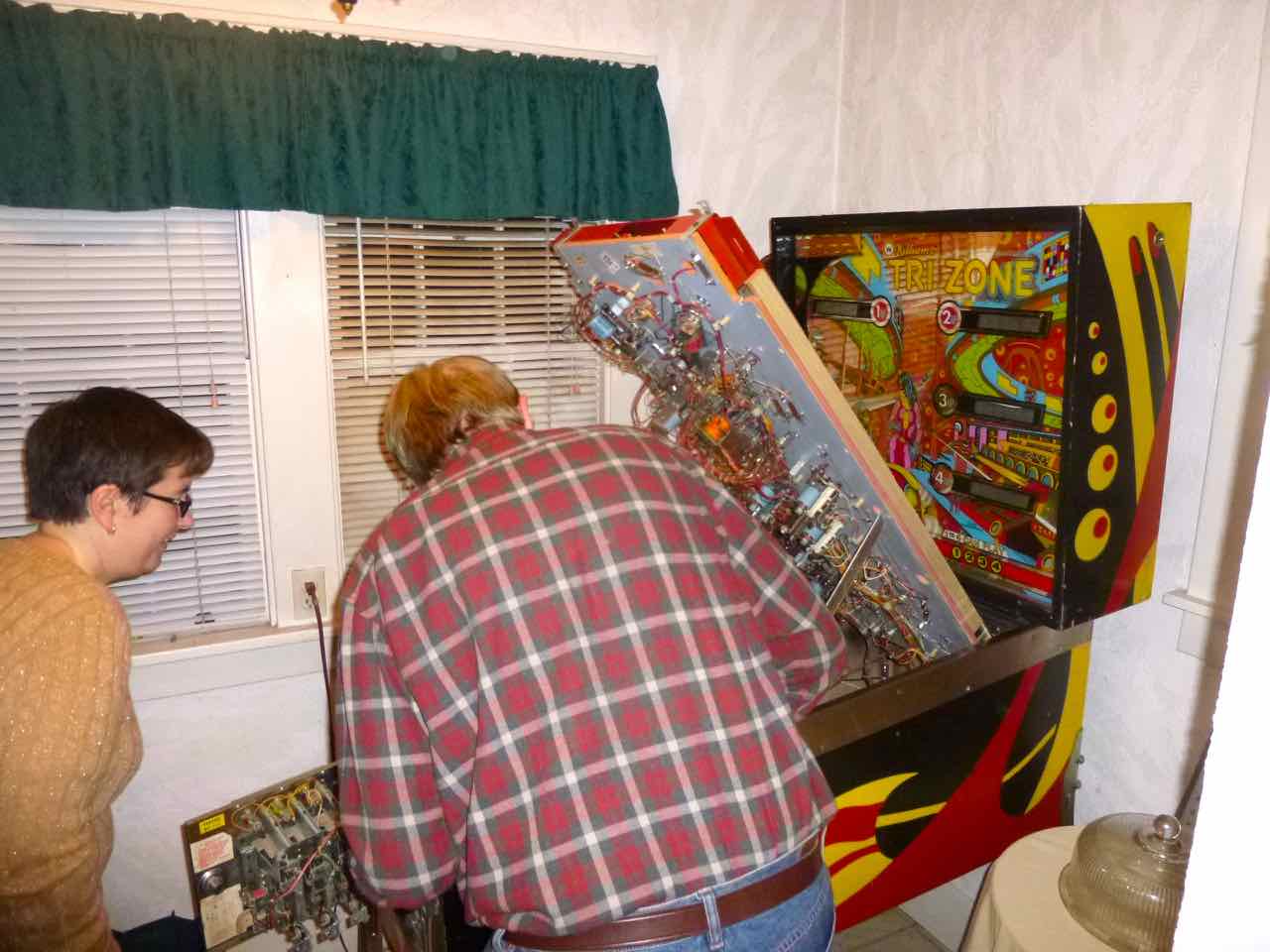 bunny_hugger showing her father how the insides of our pinball machine Tri-Zone work, at least until he gets nervous about having the playfield propped up like that and he insists on setting it back down.

Trivia: Sir William Howe, in New Jersey, apparently never received his orders to march on Albany in 1777. Inside the cover letter was a copy of the instructions for Burgoyne in Canada. Source: Redcoats and Rebels: The American Revolution Through British Eyes, Christopher Hibbert.

PS: Reading the Comics, March 21, 2016: New Math And The NCAA Edition, comic strips with mathematical themes and some other things.