I think of you when I dream of you, when I'm taking pictures of you

Any chance of drumming up mathematic blog business? Maybe. If you've got it on your Friends page or your RSS reader you aw this already. But this past week, which I figure to be the next-to-the-last one with something posted every day for a while, have been:

And now, before getting to con photos, how about some pictures of our pet rabbit? I thought you'd like that. 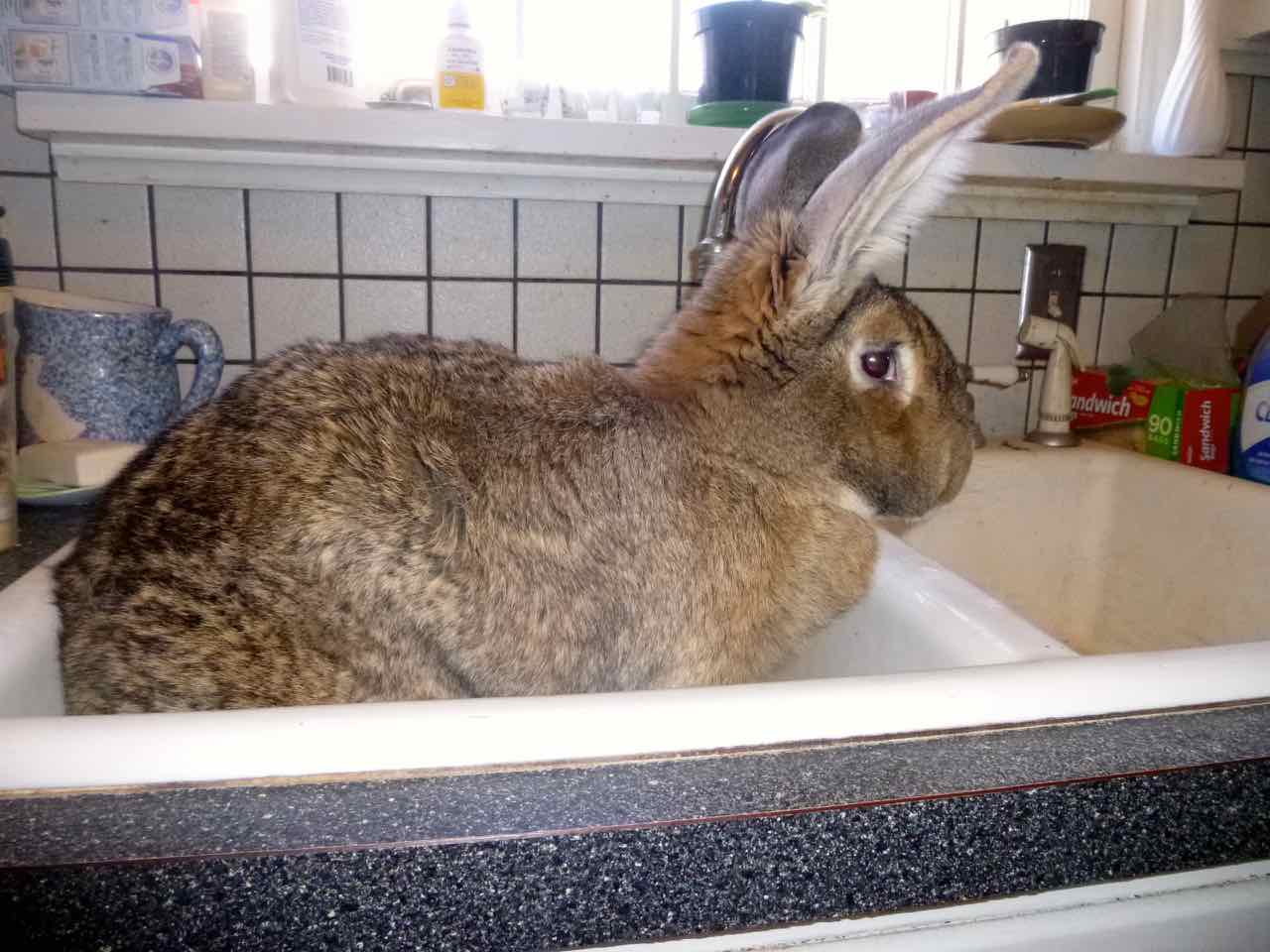 Our pet rabbit, alert and interested by the novel setting of being in the kitchen sink. He's about to get his first-ever bath. Really just a partial thing, rinsing out and shampooing an infection. Within ten minutes he will be cross. 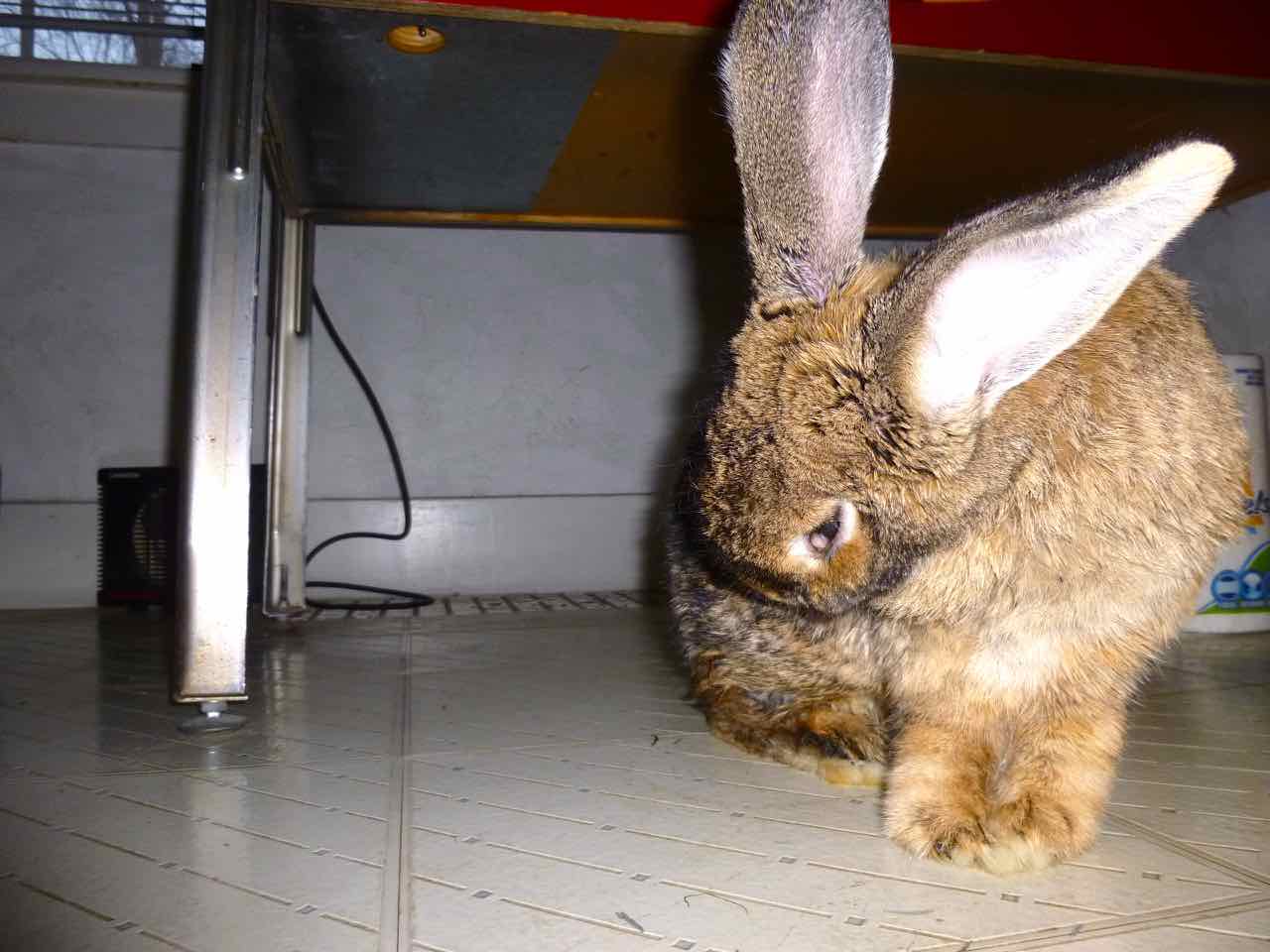 After his bath our pet rabbit grooms himself and some of the still-wet fur. He stays wet a long, long time. You can see how cross he is. He's underneath our Tri-Zone pinball. You can see the little switch underneath the cabinet for turning the pinball machine off and on. Most games have them in about this location. 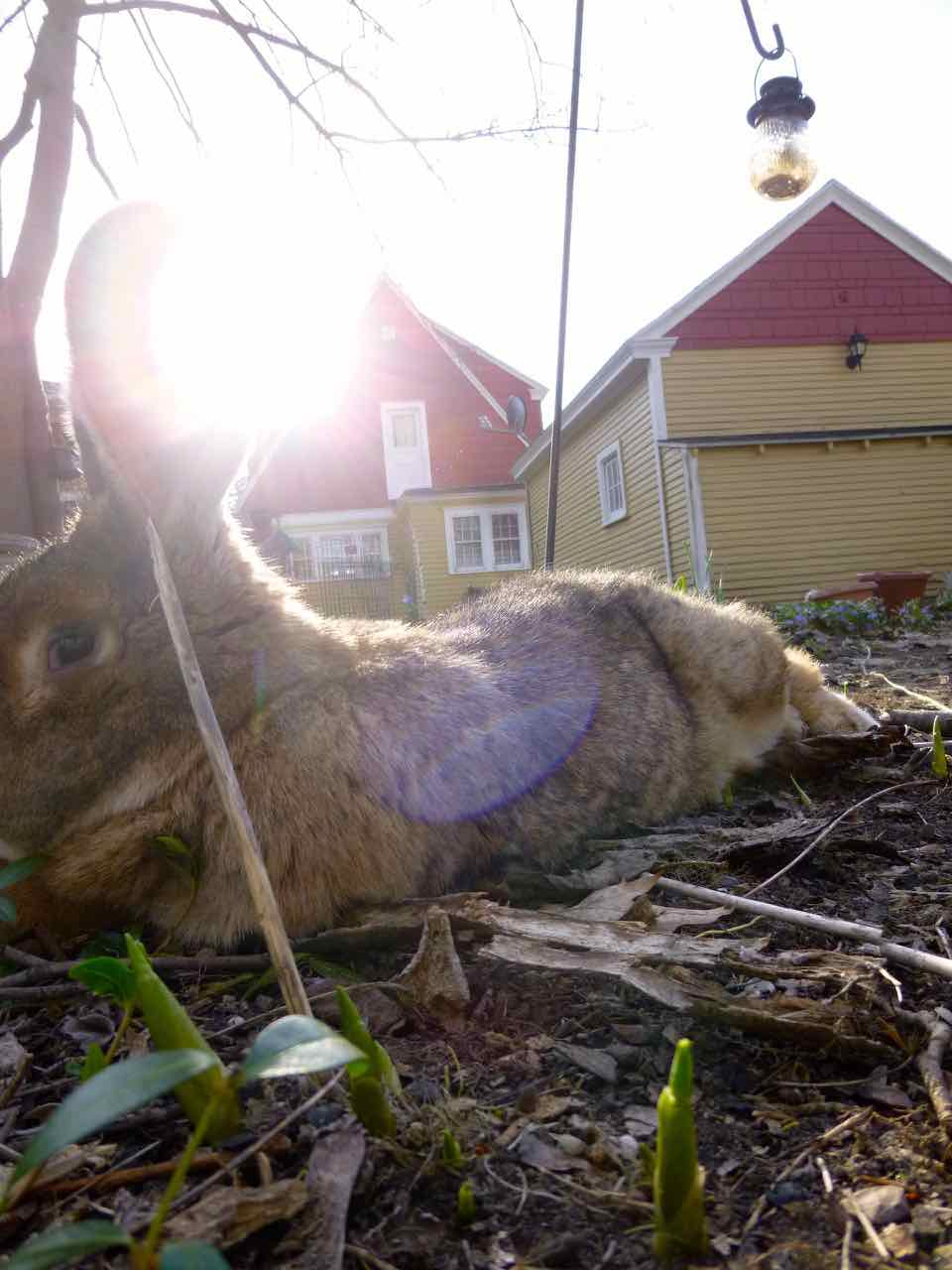 Rabbits: they light up the world! Here our pet rabbit hangs out in the back yard for some fresh air and sun and plants we're not certain he should eat. While our pet rabbit is quite large, you should understand that here he's very close to the camera and is not nearly as large as the garage or house. 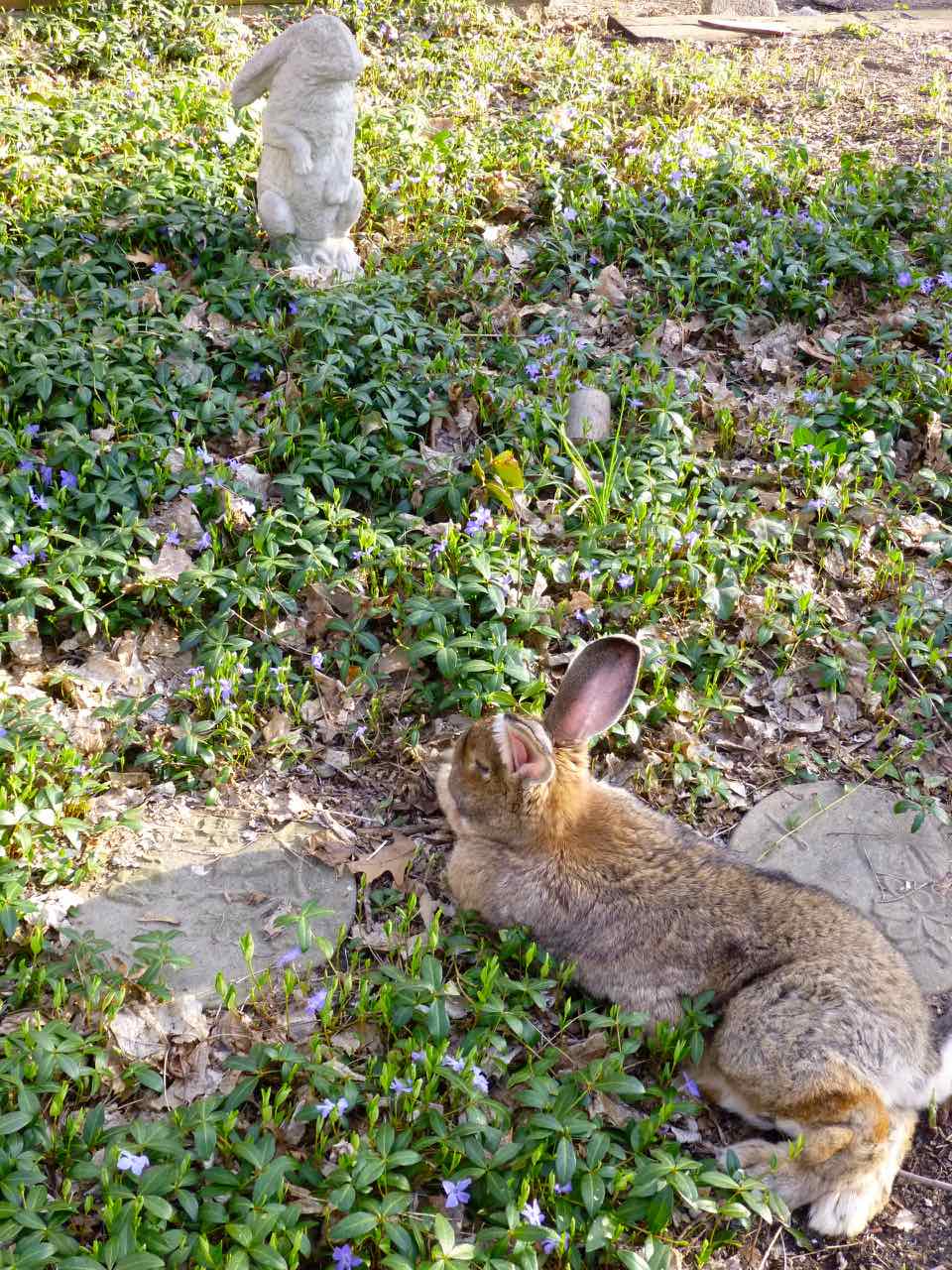 Our pet rabbit just doesn't understand this guy, the one who had that encounter with Medusa. Backyard statue that's been guarding the goldfish pond for years now. 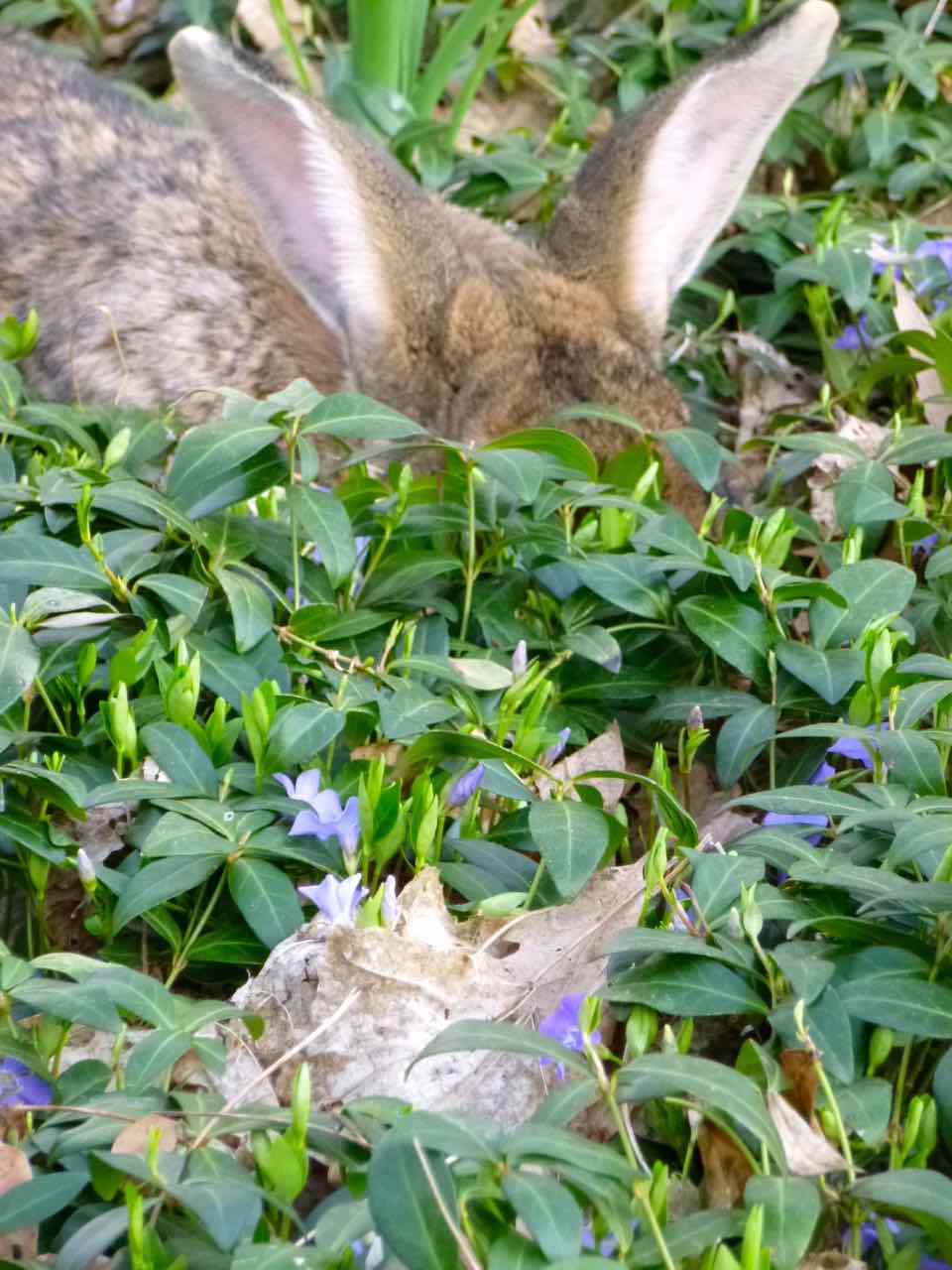 Much of the backyard is given over to what we had been calling myrtle, but is actually periwinkle. Gardening and animal-care web sites are all but universal in declaring that it is a bitter-tasting plant.

bunny_hugger tried a bit and agreed with the bitter assessment. It is commonly listed as an inexpensive and natural way to keep one's garden deer- and rabbit-proof, as the animals find the taste so repulsive they'll leave it --- and your garden surrounded by it --- alone. Here, our pet rabbit shoves his head into a huge pile of the stuff and does. not. stop. eating.