My humor blog keeps on stumbling onward. Appearing there the past week have been:

You can put this on your Friends page, thanks to your ability to put this in your RSS feed. You're welcome. 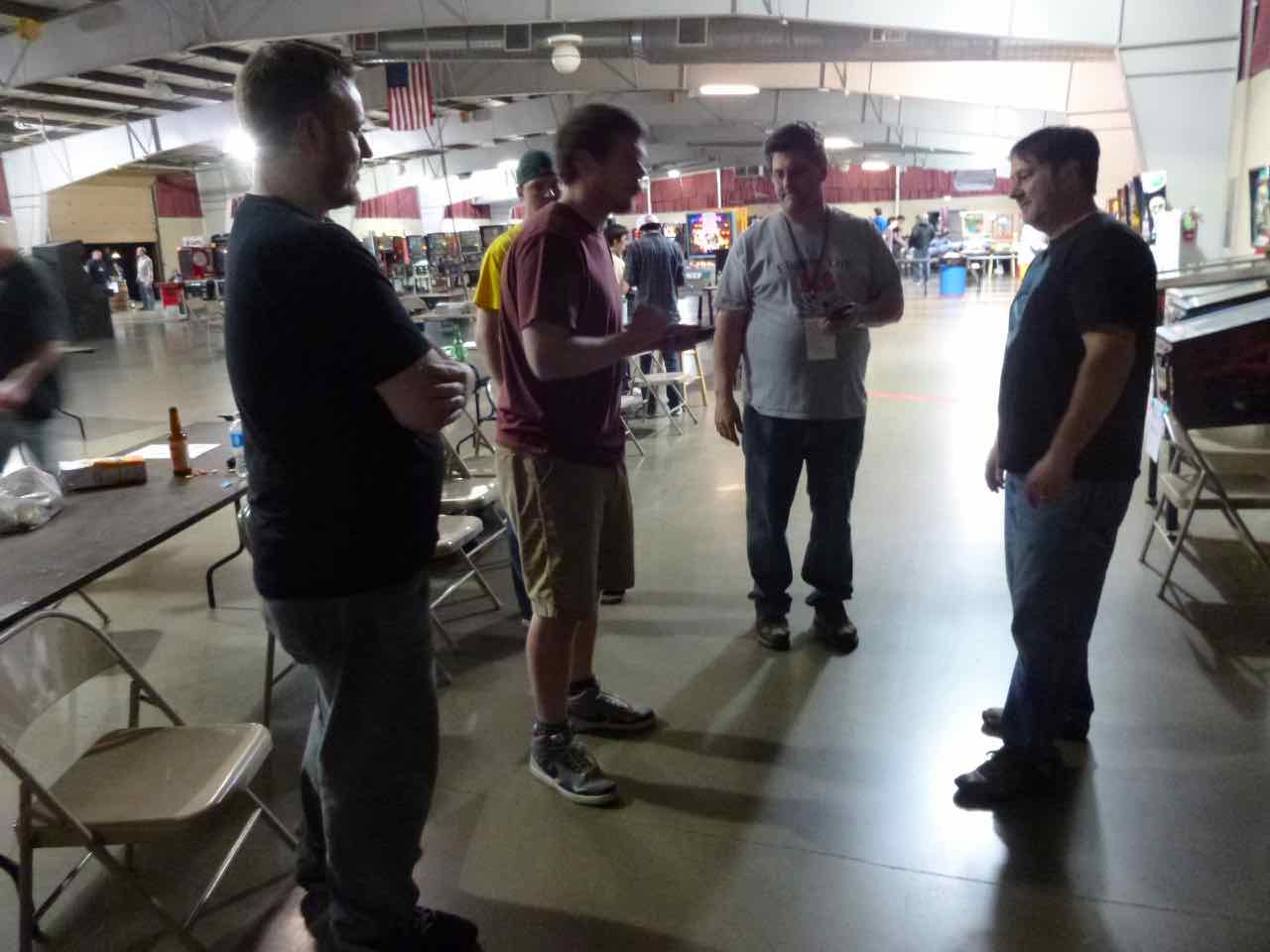 Serious late-night conferencing over the tiebreaker for Classics qualification. They would go on to play the tiebreaker, which MWS would win, and which wouldn't matter because someone above them didn't make it to the finals the next day. 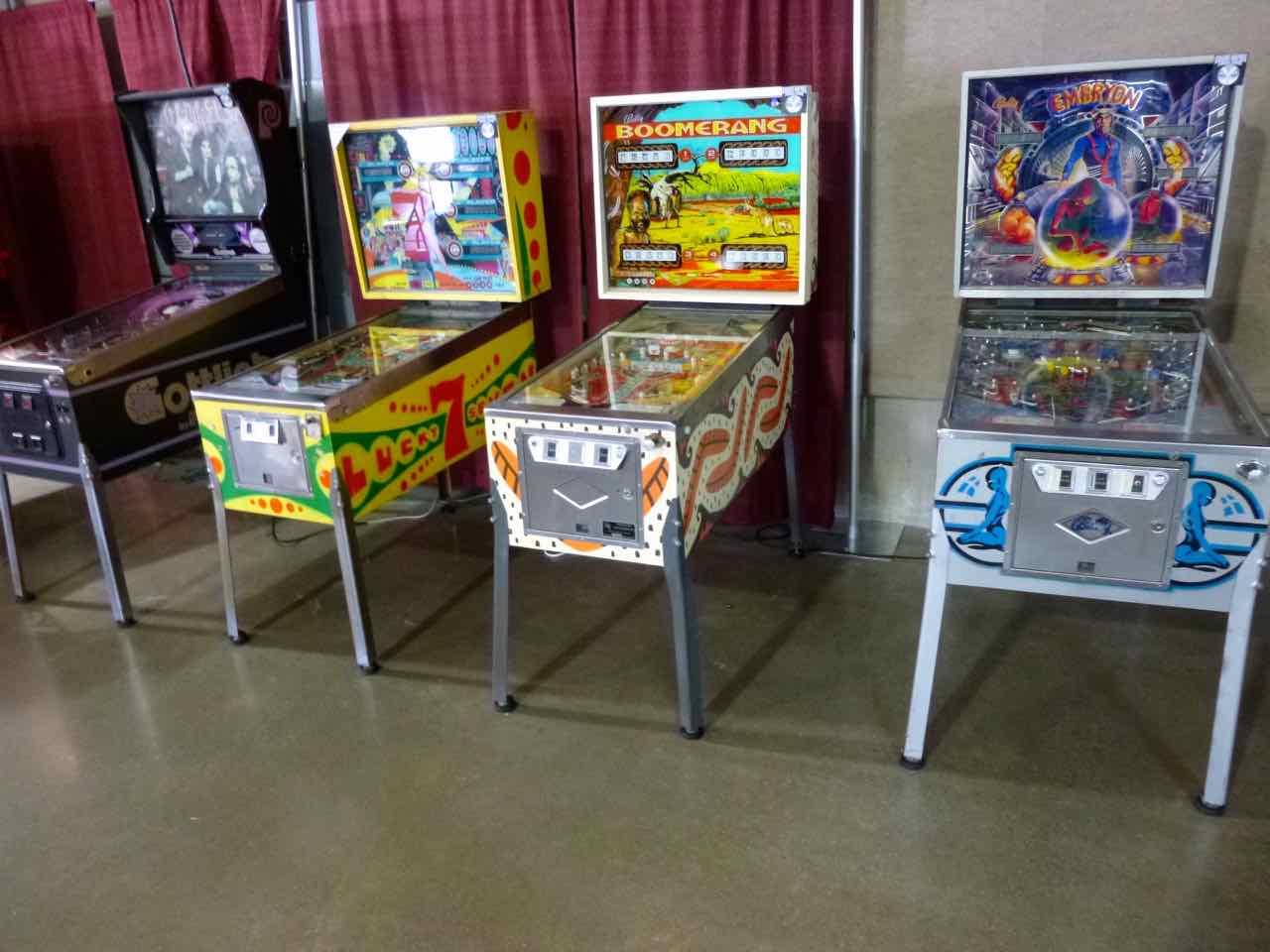 On to Saturday: Classics tournament, not quite woken up for the finals. The games are Genesis, Lucky 7, Boomerang, and Embryon. Genesis has a hideous backglass, but if you play it successfully it opens up to reveal a Metropolis-style Maria robot under the playfield, which is pretty neat. Embryon meanwhile looks like it's waiting for a prog rock album to be the cover to. 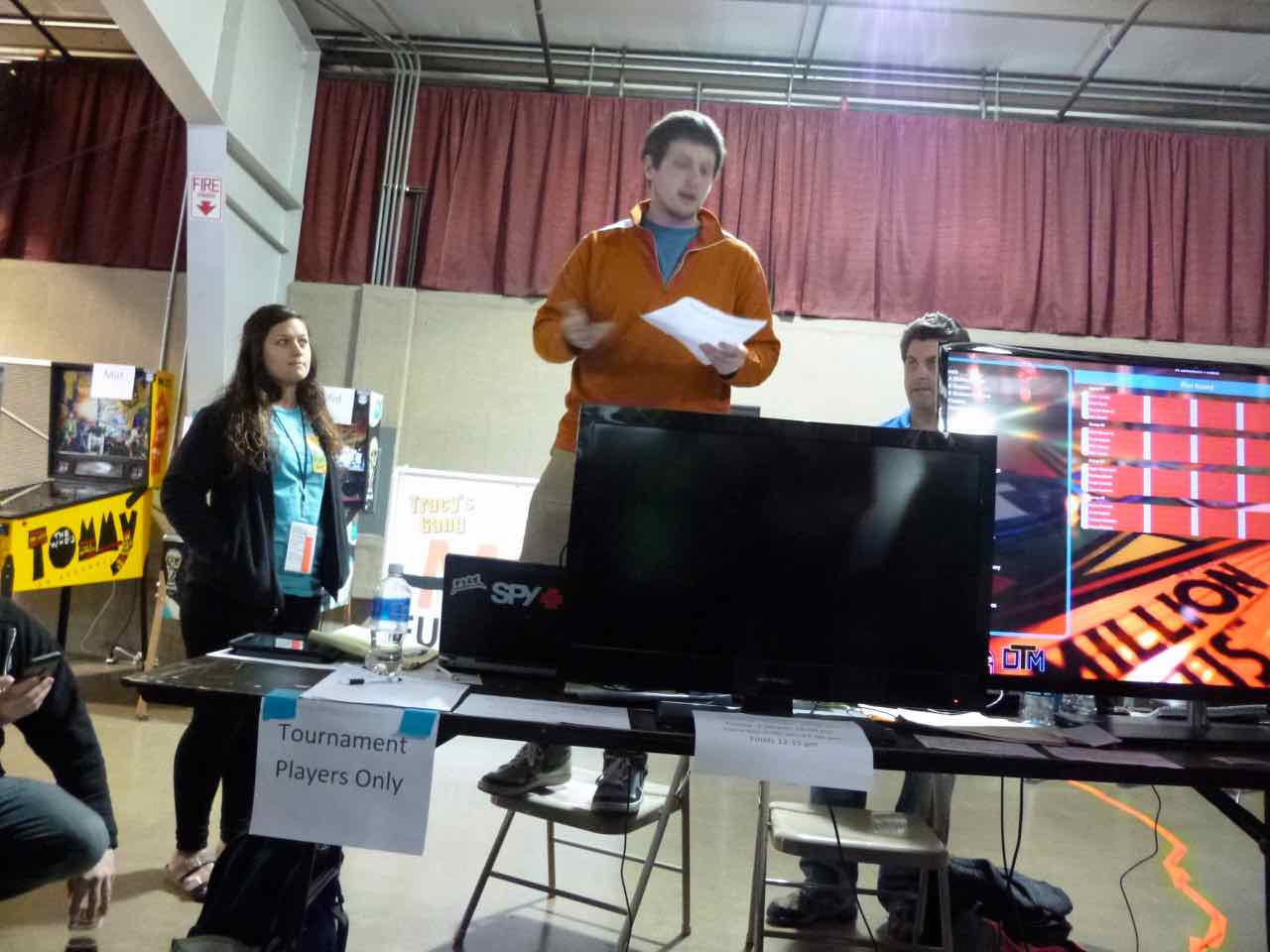 Ready for the Main Tournament? AJH gets people's attention and starts reading off the rules. I just noticed that PH, off to the right and played by Roy Orbison circa 1964, is obscured enough by the results monitor that he looks creepy. Can you spot the bit of FunHouse art? 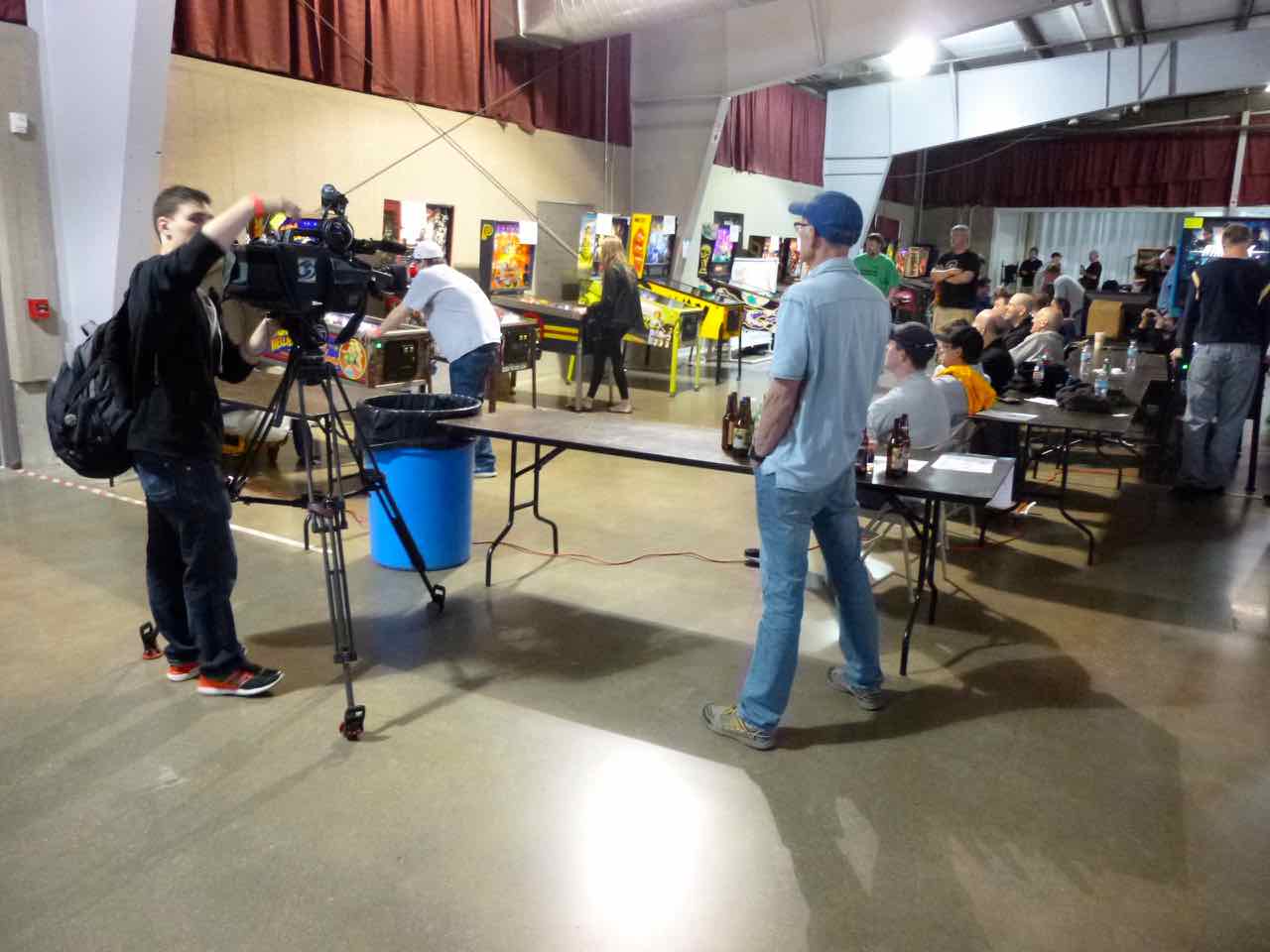 Kalamazoo's Channel 3 news team arrives to get some video of the event. Somehow I would manage to wander into view for their report, if you know exactly where to look in the distant background there. 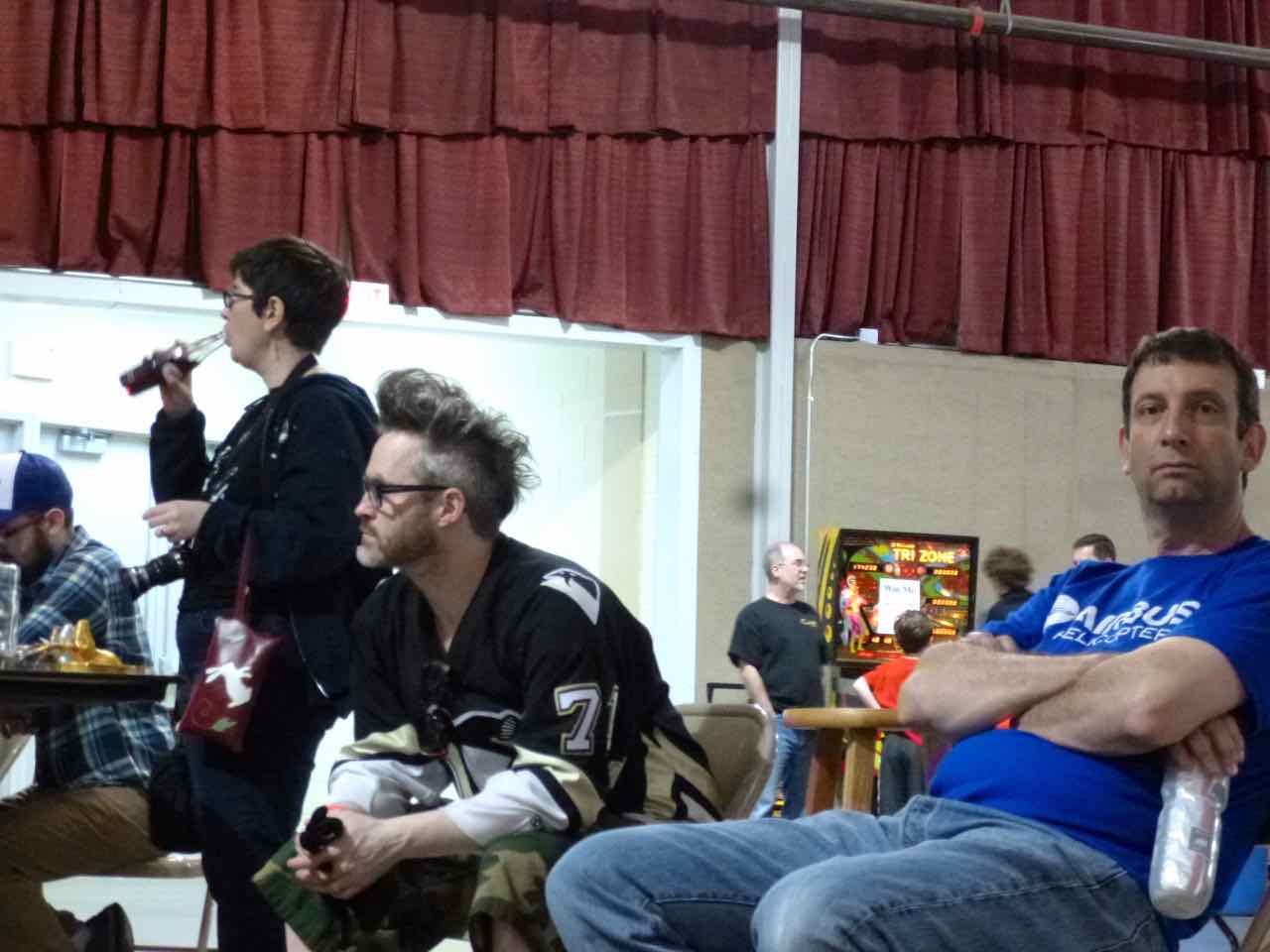 bunny_hugger drinking Moxie and then some other folks waiting for the results of finals game play. In the back you can see the Tri Zone pinball game being raffled off. We entered, of course, even though we own a Tri Zone. We didn't win the machine, although we did win a Billy Mitchell-autographed and somehow designed(?) poster with the Pinball At The Zoo 2016 logo. 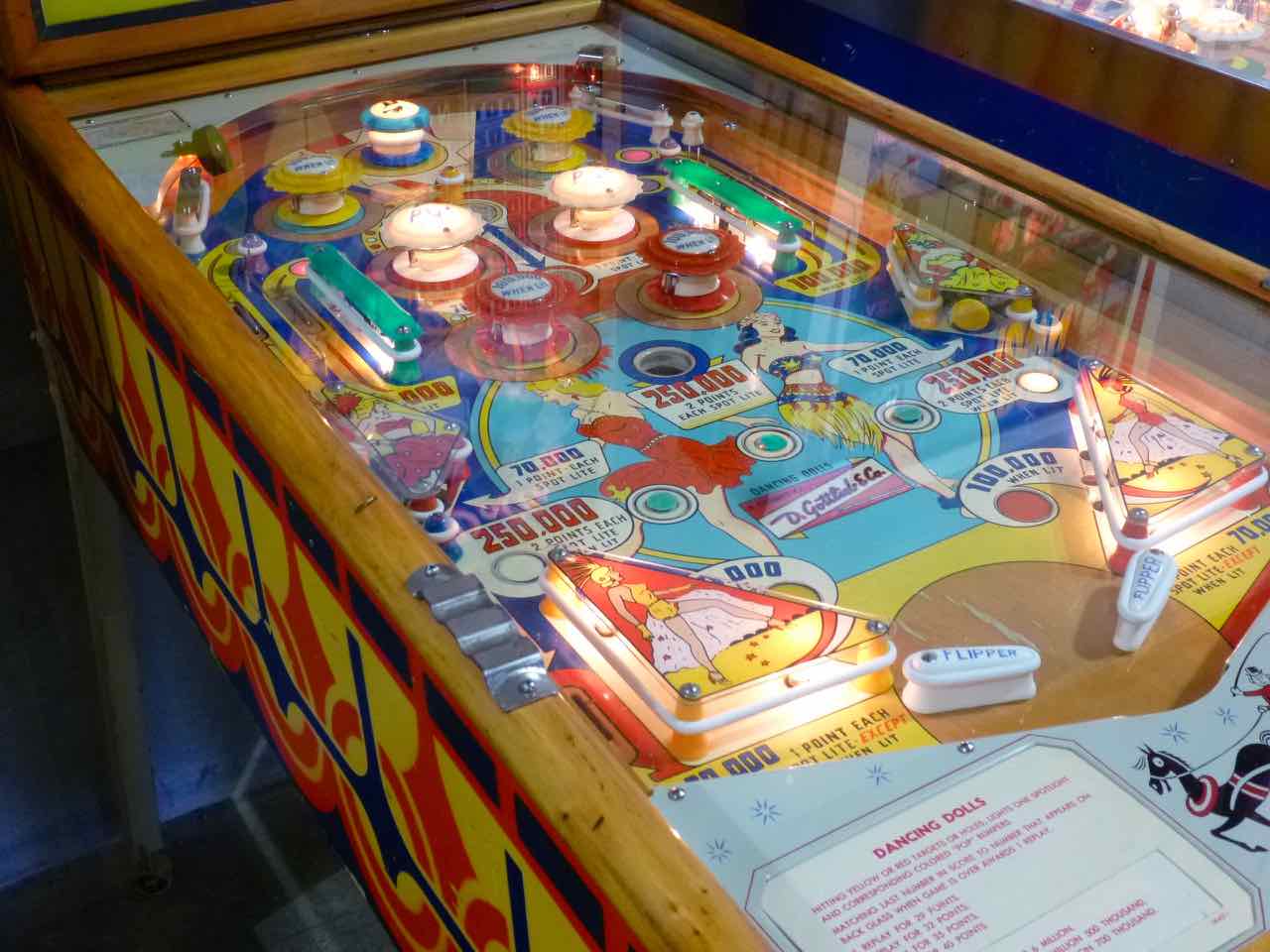 Gottlieb's 1960 Dancing Dolls, That big 250,000-point hole in the center is a gobble hole, something that's passed out of pinball machine-making. You light it up and drop your ball in and get a pretty good reward --- but lose your ball. The wavy metallic piece on the left is a cigarette holder because, 1960. If they didn't put these things on folks would leave their lit cigarettes on big boxes of wood.

Trivia: Landfill for the construction of New York City's LaGuardia Airport was brought, in part, from Rikers Island. Rikers Island had itself been considerably expanded before 1932 by dirt from the city's subway constructions. Source: American-Made: The Enduring Legacy of the WPA: When FDR Put The Nation To Work, Nick Taylor.

Currently Reading: Coming Out Under Fire: The History of Gay Men and Women in World War II, Allan Bérubé.

PS: Theorem Thursday: The Intermediate Value Theorem, starting a new sequence of posts with some talk about my car, of course.