Does enchantment pour out of every door?

And if you're not following my mathematics blog on your Friends page (previous link) or RSS feed (this link) maybe you'd like to see what's there today? Posted the past week have been:

I figure to start on Anthrohio pictures for Thursday. In the meanwhile, how about some pictures of that sketchy party store that was at the end of the block and then suddenly disappeared? I thought you'd like that. If you wouldn't, keep scrolling down. 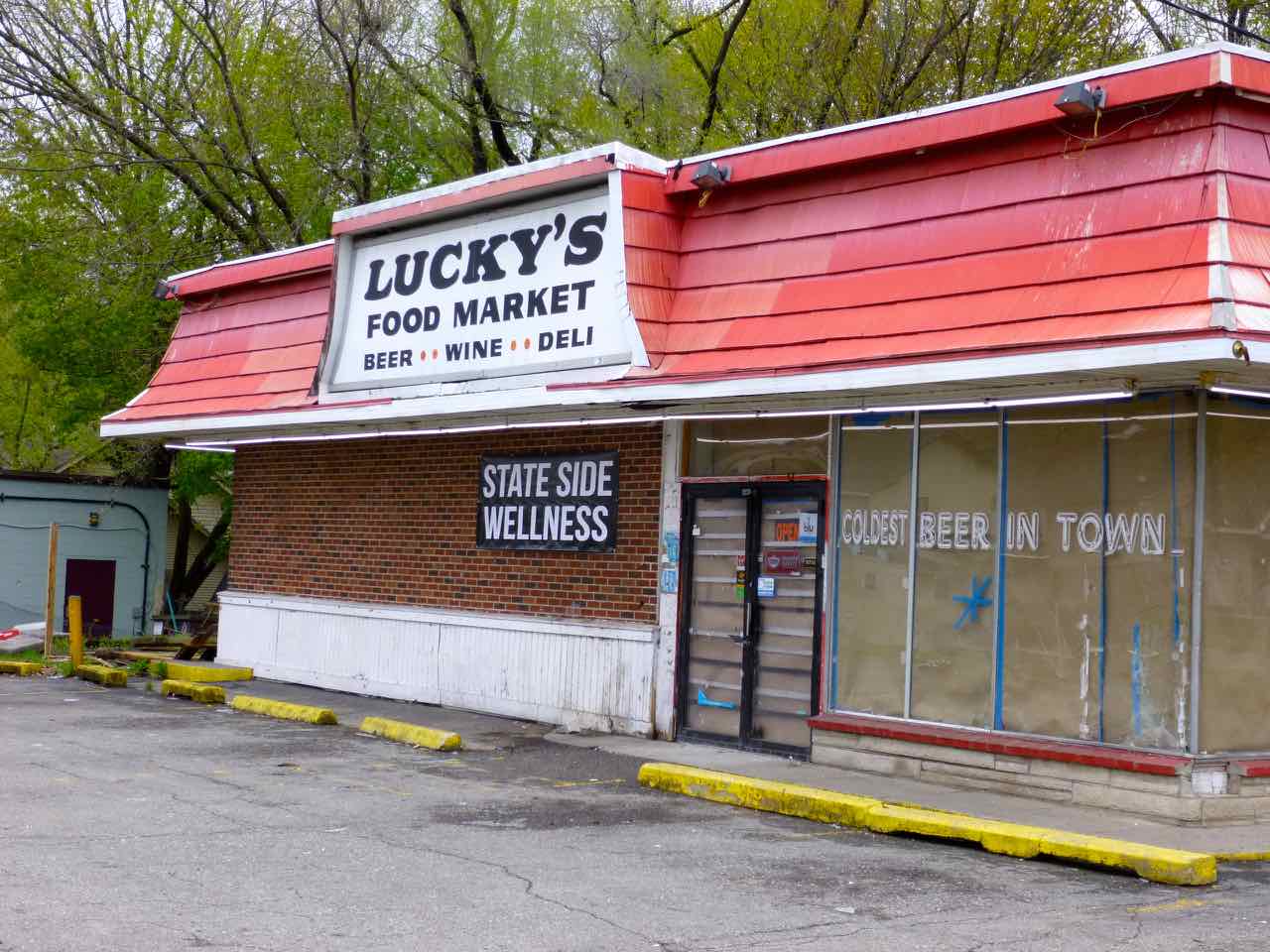 The sketchy party store at the end of the block. This is after it had closed down, and they had emptied out a lot of the interior. They'd also torn down the fence blocking off the lawn that they have for some reason. The mysterious ``State Side Wellness'' suggests what the place might be becoming, but since this picture was taken the sign was taken down and everything --- the bricks, the siding up top, everything --- removed from the front, revealing a cinder block construction of a former service station. So now we know: there's probably an enormous deposit of used motor oil and other auto-related toxic chemicals underneath the lot. Yes, they still have the ``Open'' sign in the door. The Eastside Community Facebook page has hypotheses about that too and I have to admit, they sound plausible. 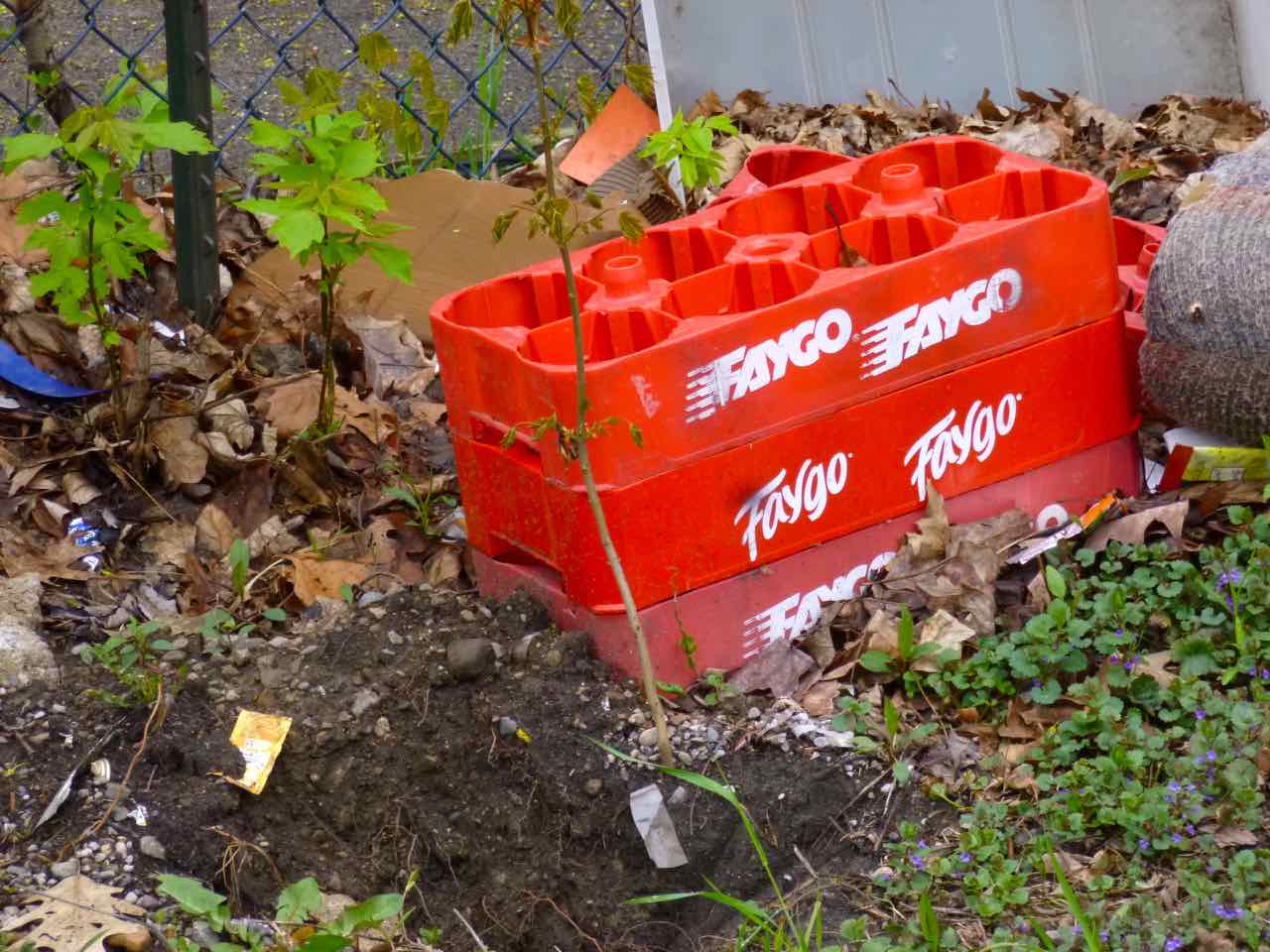 From the then-not-cleaned yard behind the sketchy party store. It actually wasn't that bad, considering it had been hidden behind a fence for years and so could have accumulated no end of convenience-store-related junk. But here, it's just a couple logo redesigns worth of Faygo bottle holders. Unrelated: the Insane Clown Posse just this past weekend performed two nights in a bar within walking distance of here. 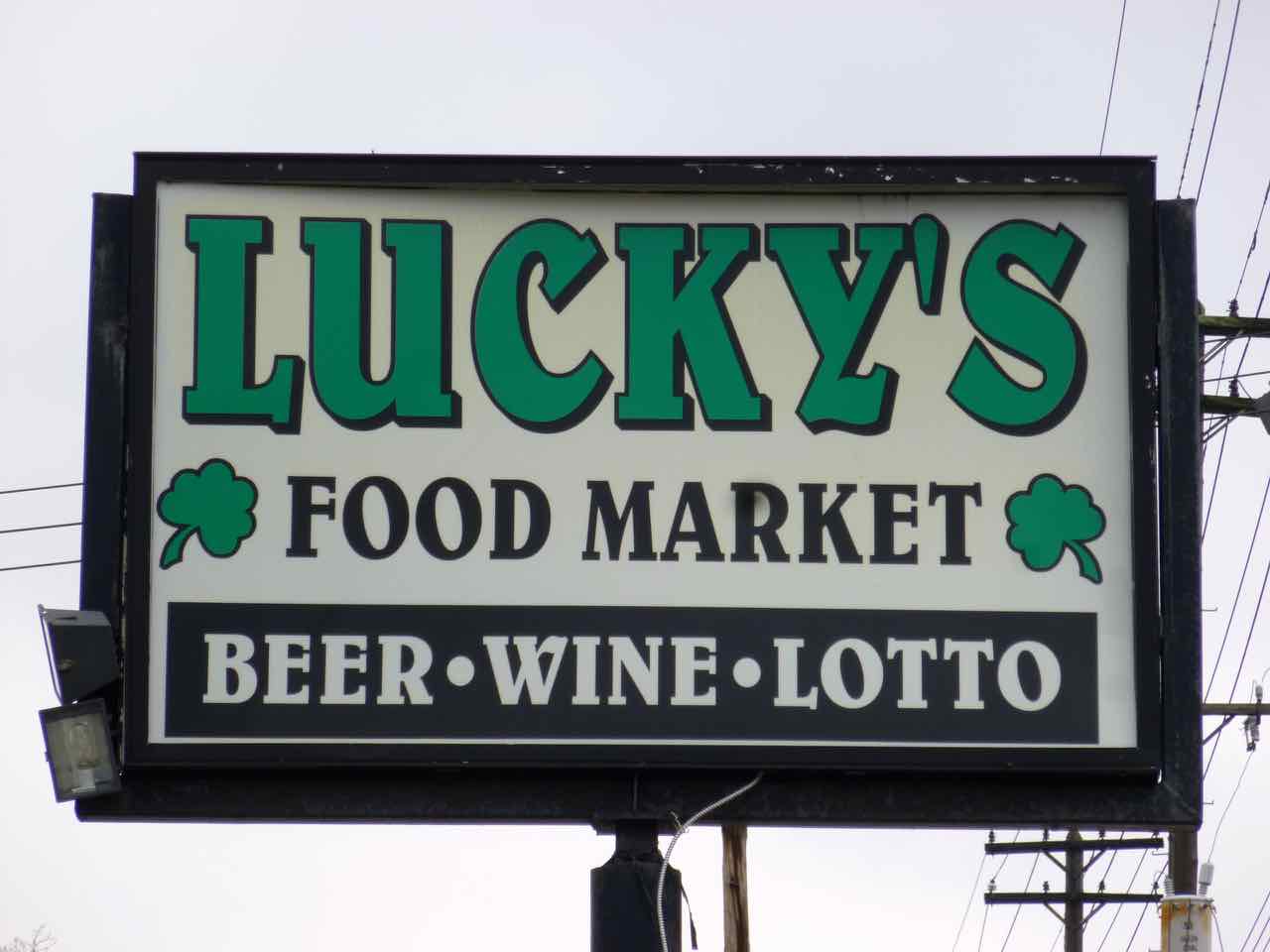 The Lucky's Food Market logo, suggesting that someone might buy food at the sketchy party store. Note the traditional symbols of luck: shards of broccoli. This sign is still (as of this writing) up there, but who knows how long that will last? 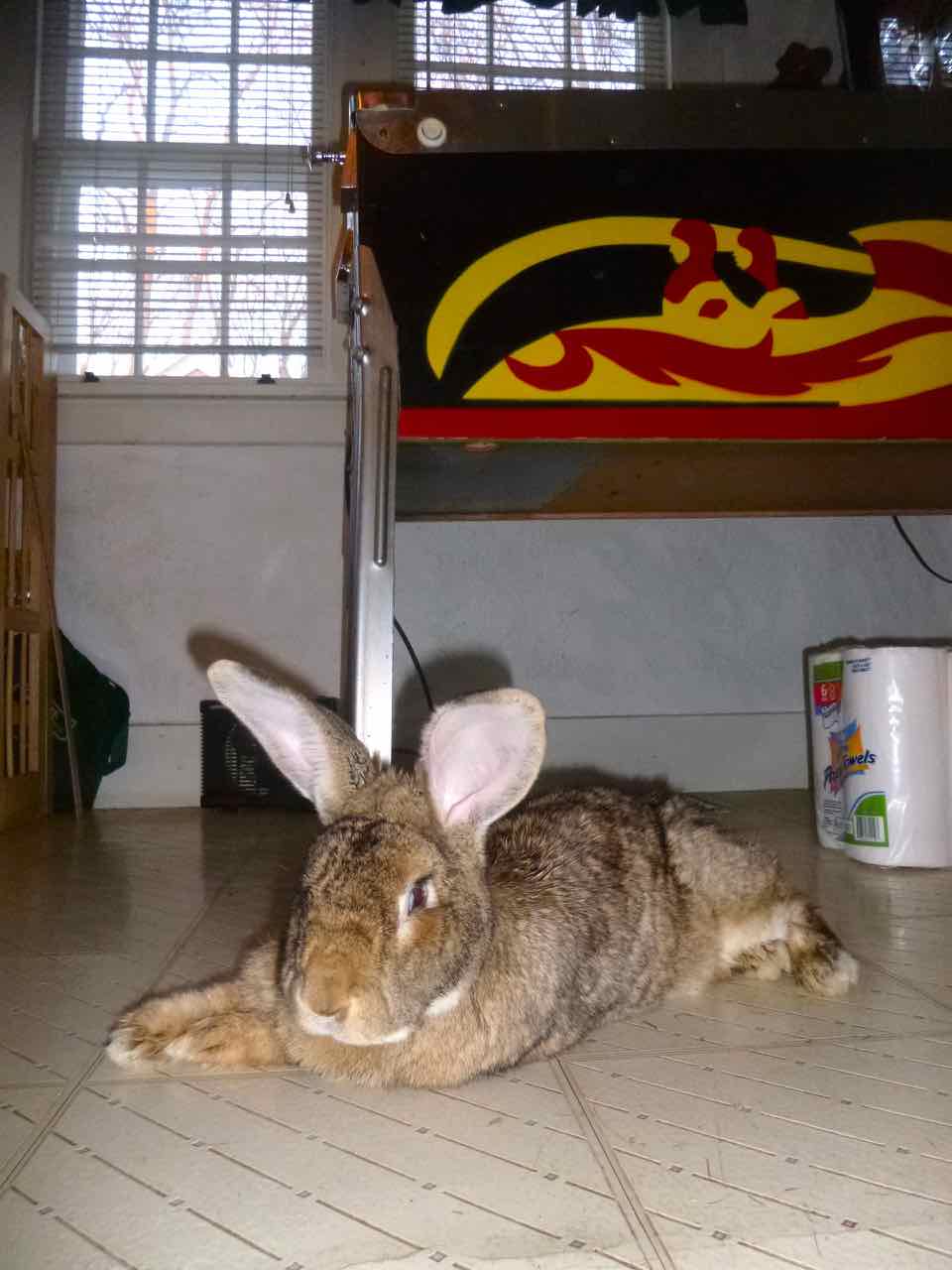 Enough of the abandoned convenience store? You just say that because you haven't seen what it looks like now. But, fine, then. Here's our pet rabbit lounging in the game room, next to our game. His ears are on full alert, although I don't believe the game was turned on and thus making noise. 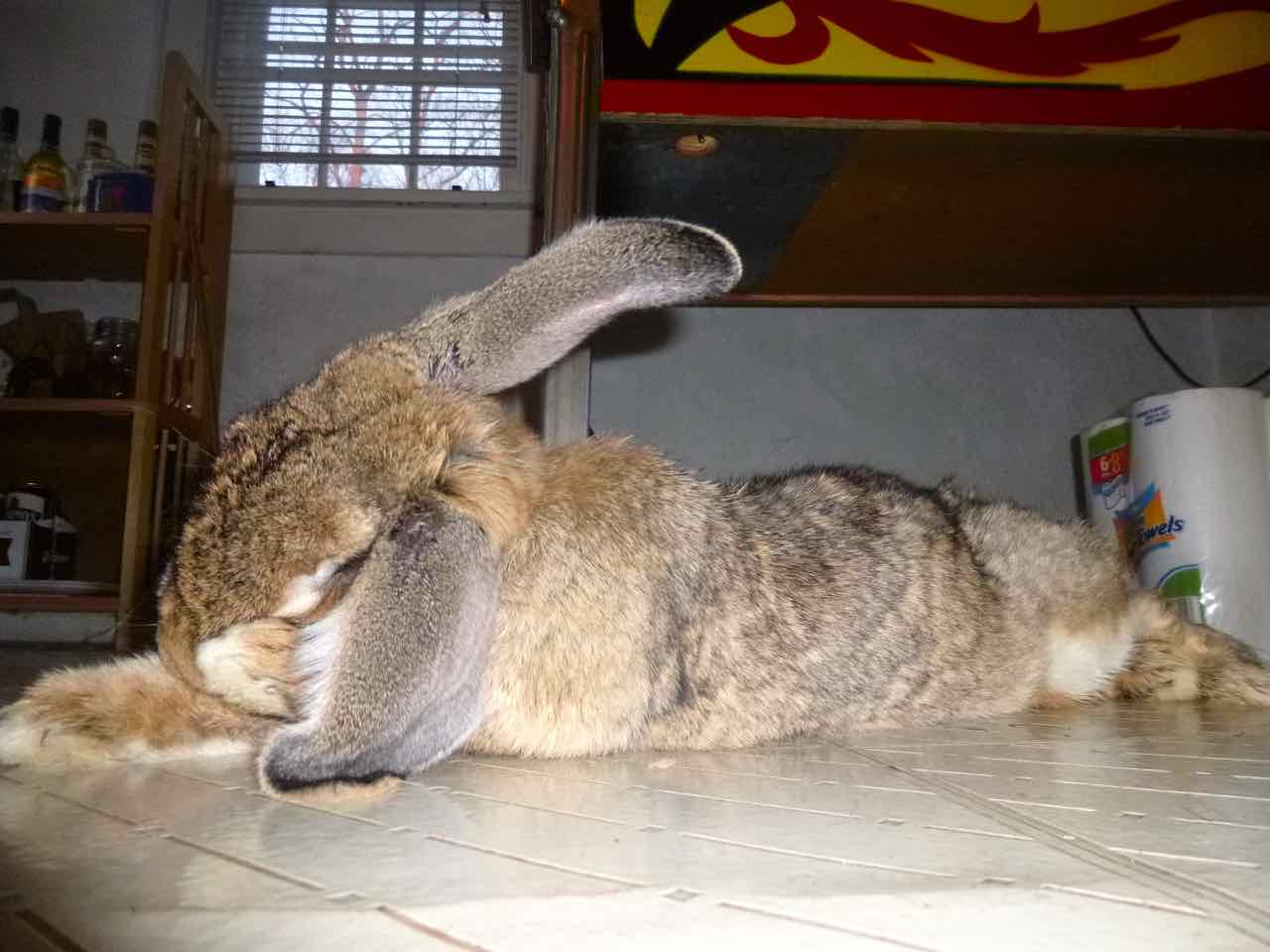 Our pet rabbit grooming himself beside the Tri Zone game. If you look carefully you can see the rocker switch used to switch the machine on and off. Most pinball machines have them in about this position. (Those that don't have them on the backglass.) Only use this knowledge for good.