The clock struck midnight and through my sleeping

It was a more normal week for my mathematics blog, four posts if you go from Sunday to Sunday, like I do. If you missed them here's your chance to see some pictures of Cedar Point, right after the links:

And now to some pictures from our June visit to Cedar Point, the first of the three we've made (so far) to the park. They had a new roller coaster, and renovated a park entrance, and it is after all an amusement park so there's plenty of interesting stuff to see. 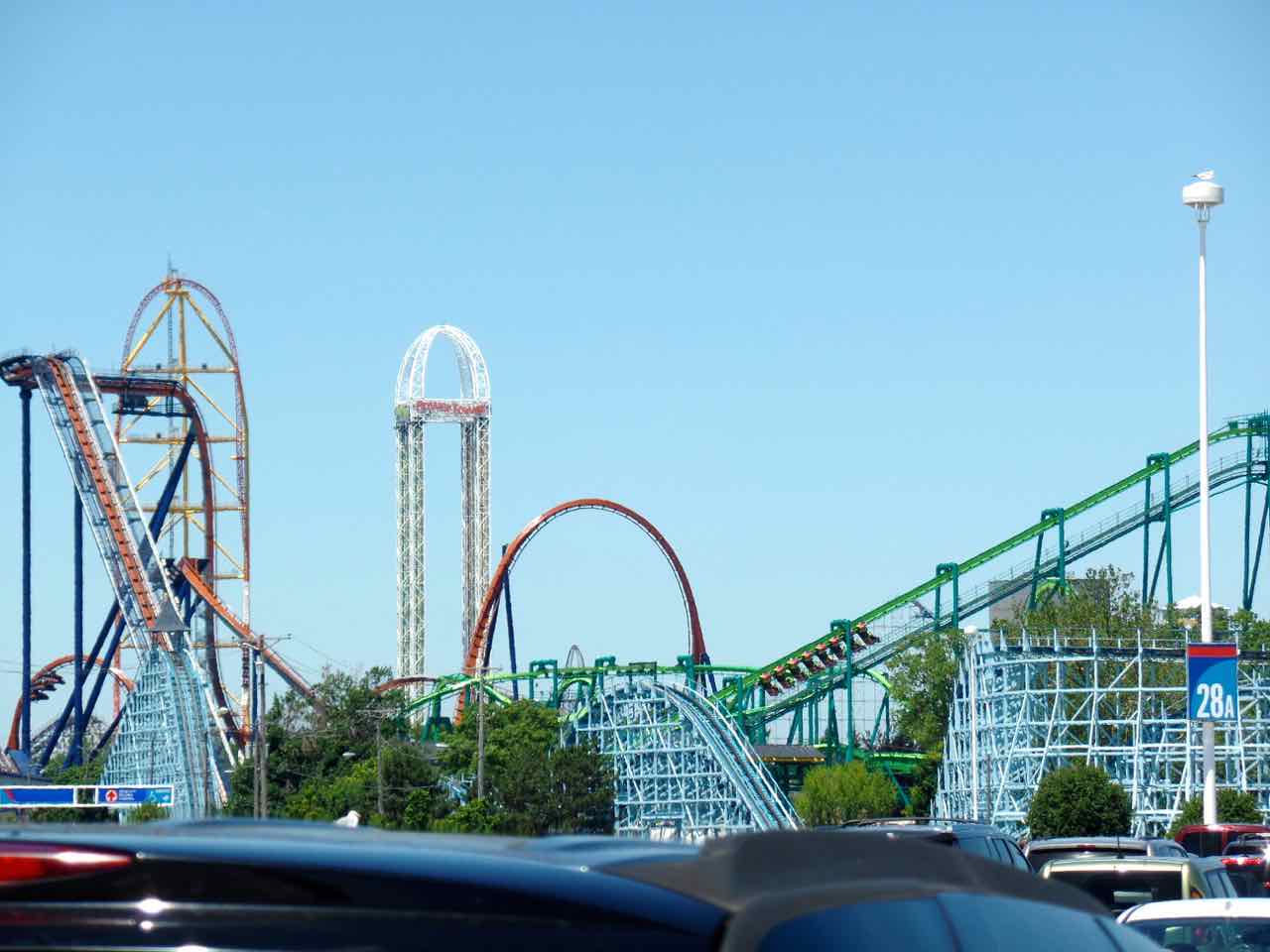 What's New at Cedar Point for 2016! This is to the left of the main gate. Valravn is the new roller coaster, the blue-and-orange one with the precipitous drop on the left. It's smaller than Top Thrill Dragster, the yellow-framed top hat behind it, but the gimmick of Valravn is it holds your car still just before letting it drop. 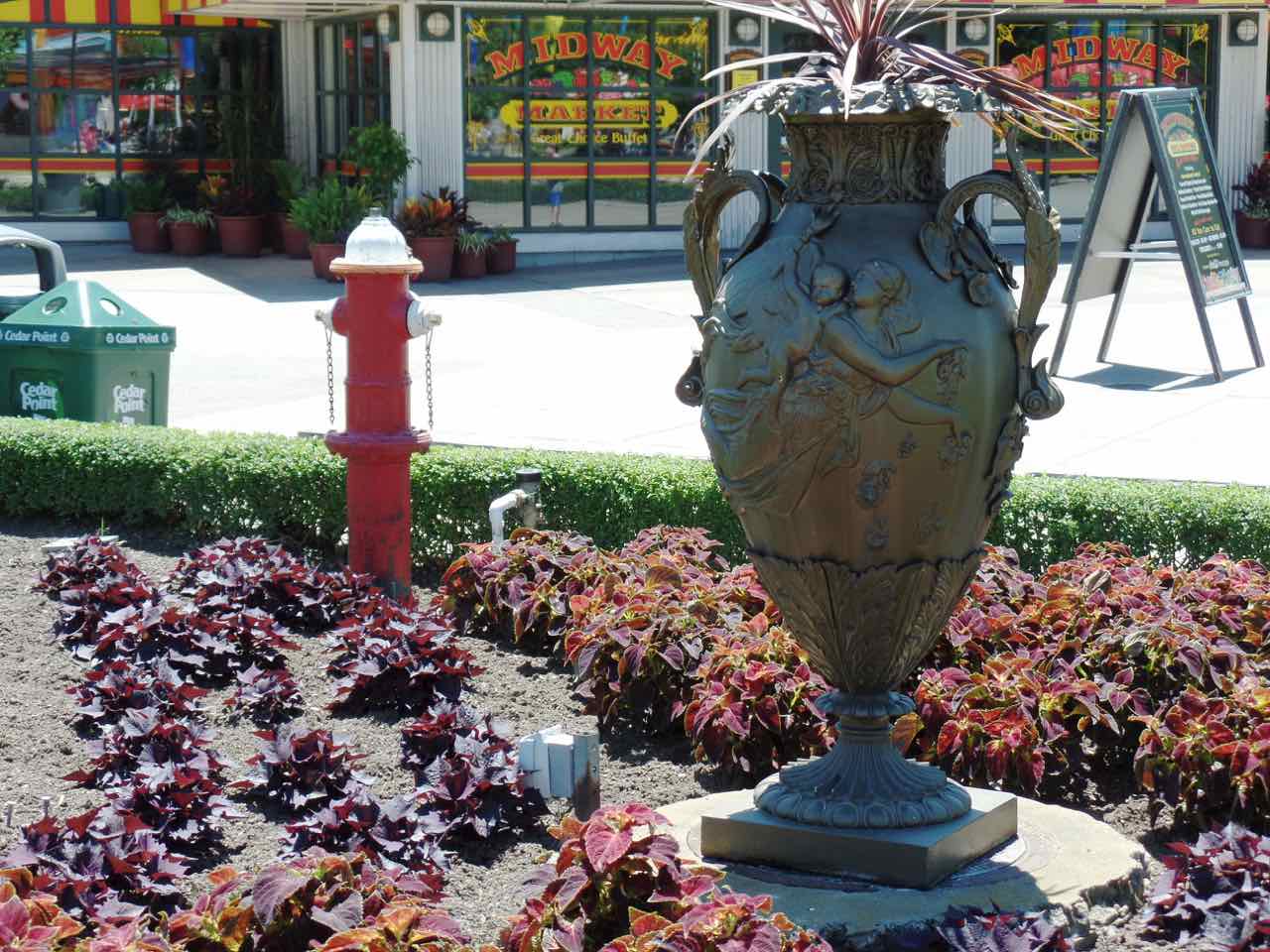 What's Old at Cedar Point for 2016! Not much, considering the park dates back to Ulysses S Grant's first administration. The urn here, on the main midway, is one of its oldest sculptures;

bunny_hugger's found it or some other sculptures that look similar to it in catalogues from a century-plus ago. Sad to say in the renovations for Valravn its contemporary statue of Mercury went missing. Ahead of the construction of GateKeeper a griffin statue went missing. The griffin had been nowhere near GateKeeper's area, but since GateKeeper has a griffin mascot everyone figured the statue would reappear near that roller coaster, and it hasn't. 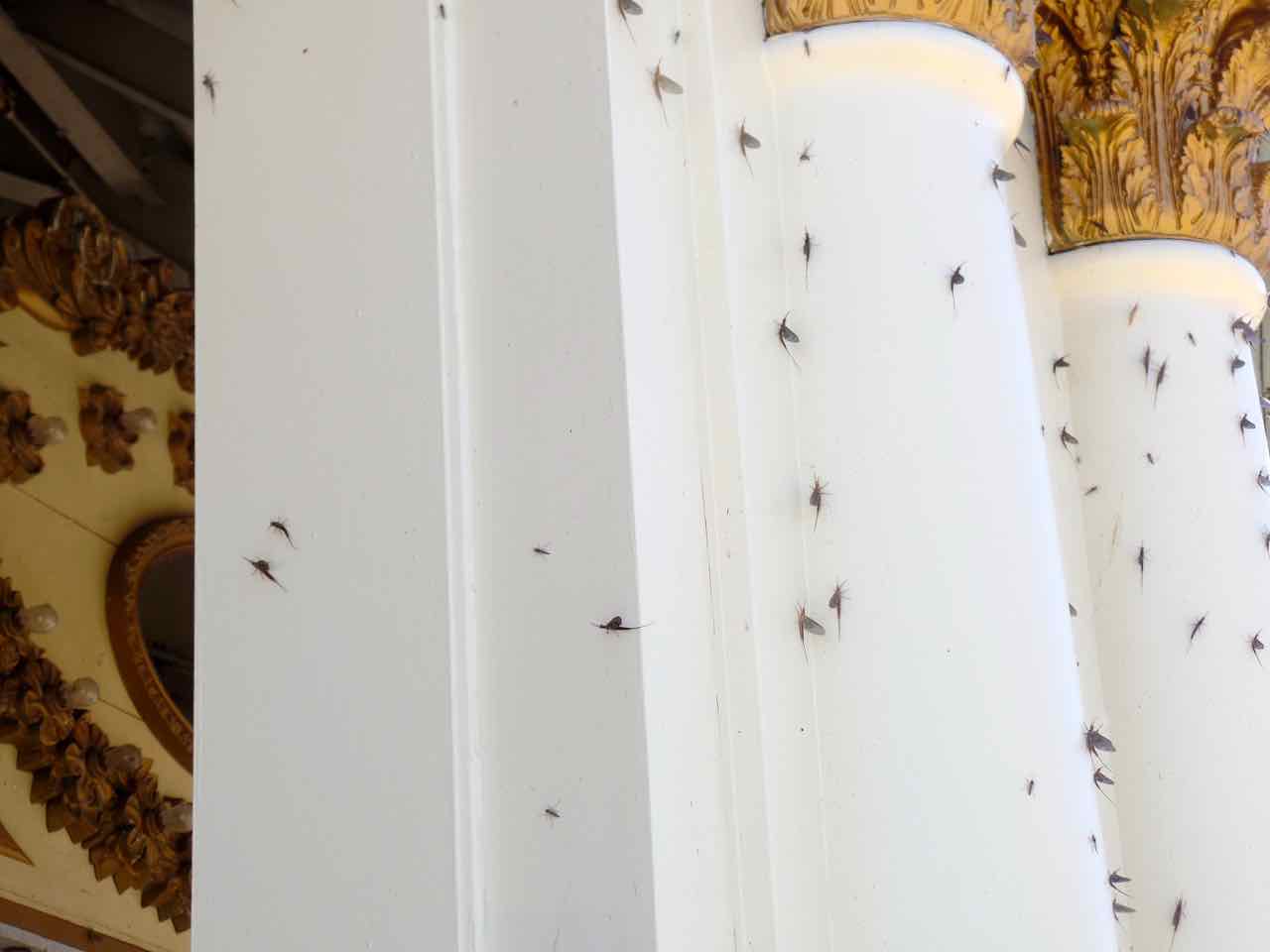 What's Short-Lived At Cedar Point for 2016! Mayflies, lots of them, all over, in this case, the Midway Carousel. It was actually June when this picture was taken but that's all right. There were the little bugs everywhere, especially if it were somewhere painted white. A ride operator on the Magnum XL-200 said they'd be there only another week or so. 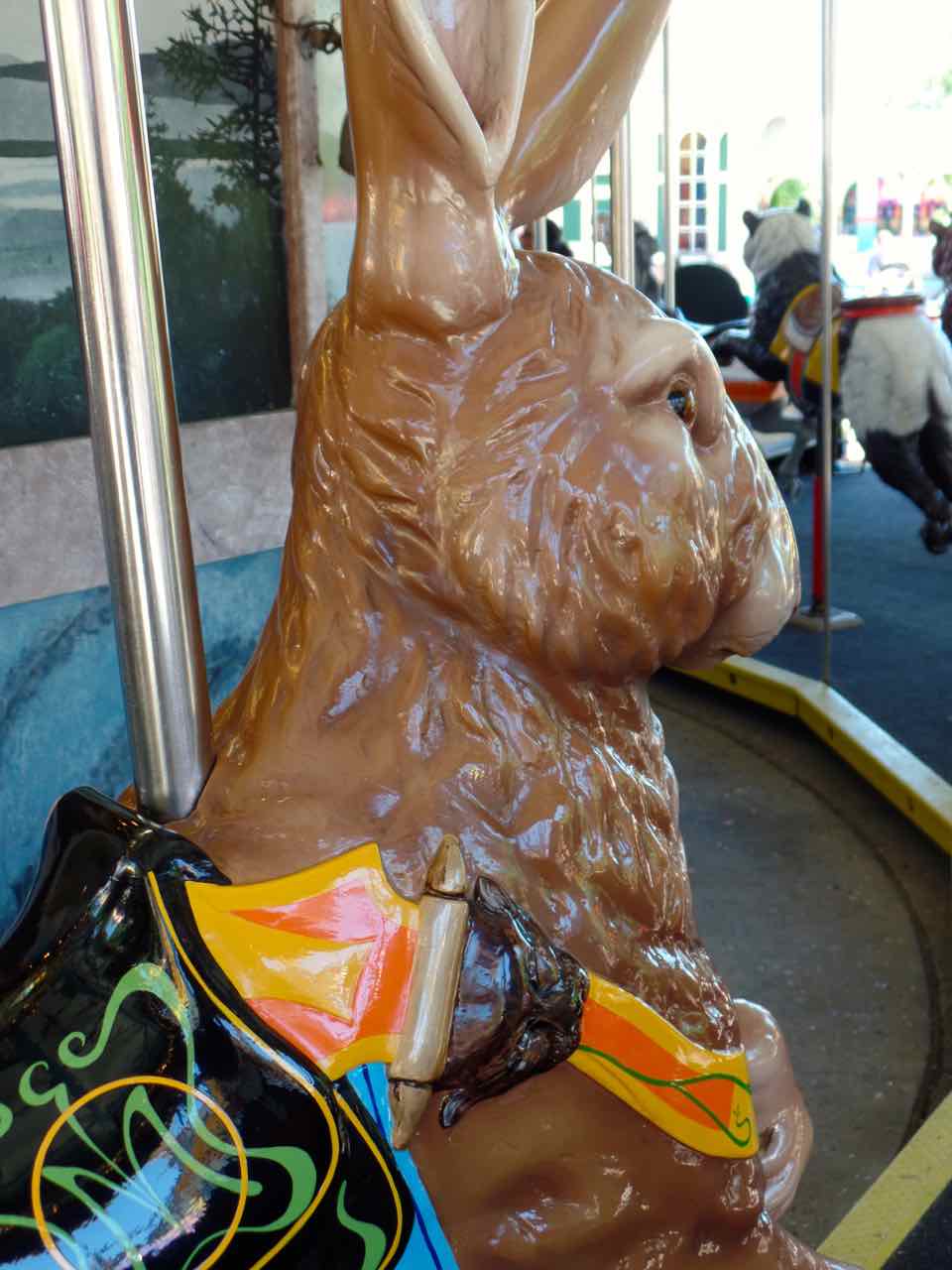 What's Still There At Cedar Point for 2016! Bunny on the Kiddie Carousel, not quite giving you the ``hello ladieeeeees'' eye. In the background is a panda, which I think is a regular bear mount painted panda colors, something they used to do in the day. 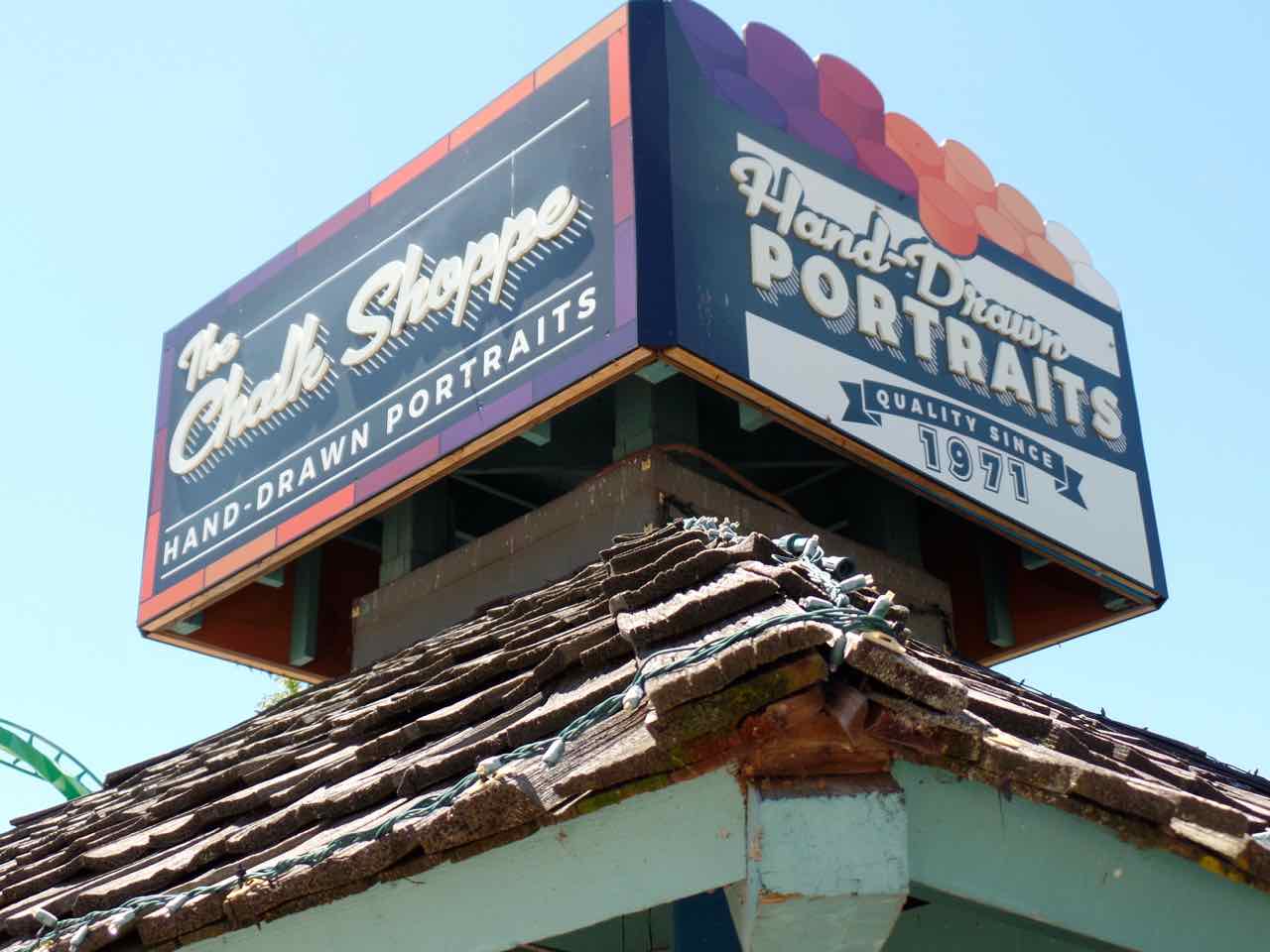 What's Maybe Different At Cedar Point or isn't But Could Use New Shingles Anyway for 2016! We thought there was a change in who did the fairground portrait pictures and took photos of who was offering them at the front and at the back of the park. Also, boy, that kiosk needs a roofing job. Well, it looks less bad when you don't have a crazy high zoom lens focusing on it.

Trivia: Chester Alan Arthur's first official act as president was on 22 September 1881 when he appointed 26 September, the burial day for James Garfield, as a national day of mourning. Source: From Failing Hands: The Story of Presidential Succession, John D Feerick.