And on every street corner you'll hear

I do want to put in a good word for my humor blog as a potential resident of your Friends page, or something to keep your RSS feed from being lonely. It's almost as easy as subscribing to my WordPress blog directly and there I only talk about subscribing to it once a month. Twice if you count the other blog. That's a respectable bit less of talking about it, right? Anyway, the things that I've published there this past week:

So to again capture the event while it's freshest and most timely let me give you some more pictures of this year's Silver Bells In The Underwater City. 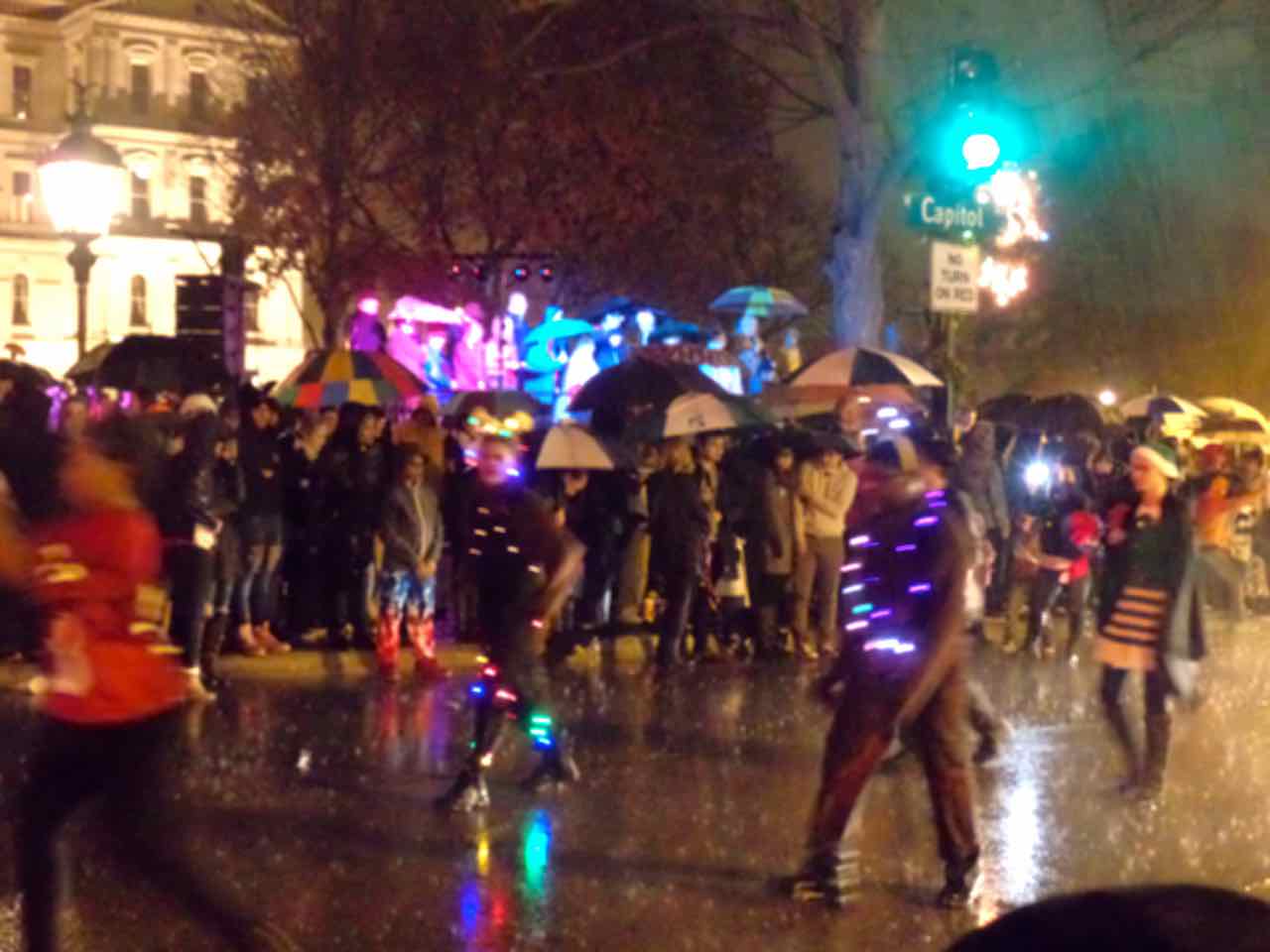 The moment the rain seemed heaviest, just before a letup that made us think it would be all right after all. A marching band had gone through, just marching quickly and not quite playing, and before the next float were ... a couple people in reindeer costumes, with lights. There were also some people in gingerbread-man costumes. Everyone was walking faster by now, though. 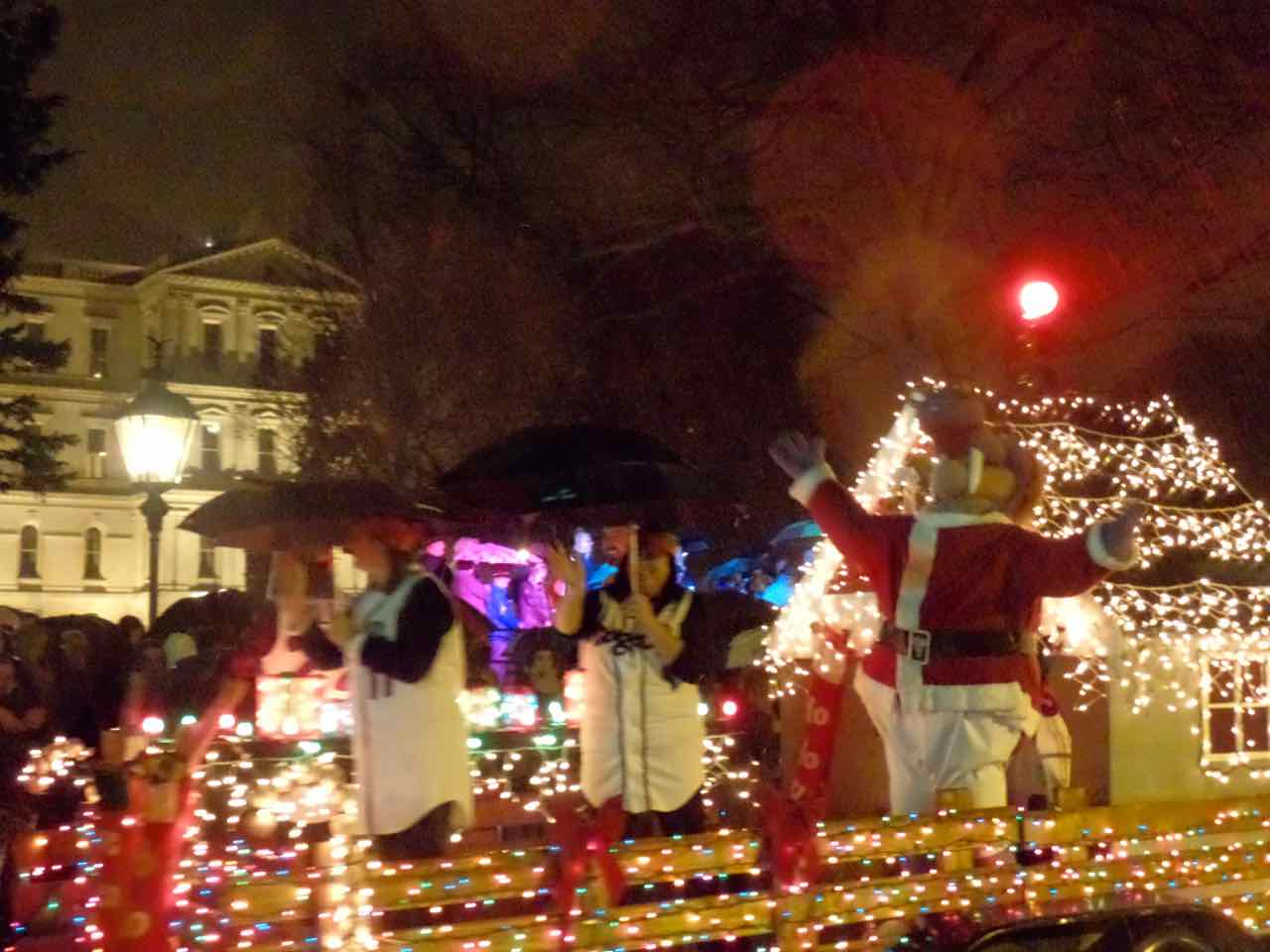 One of the last floats to make it through and one zipping right along at that. From the Lansing Lugnuts. The mascot on the right is Big Lug, the lugnut-themed dragon that's the team mascot. As the rain got heavier he looked up to the heavens and raised his arms and challenged it to come down, so, we can blame him for the real squall. 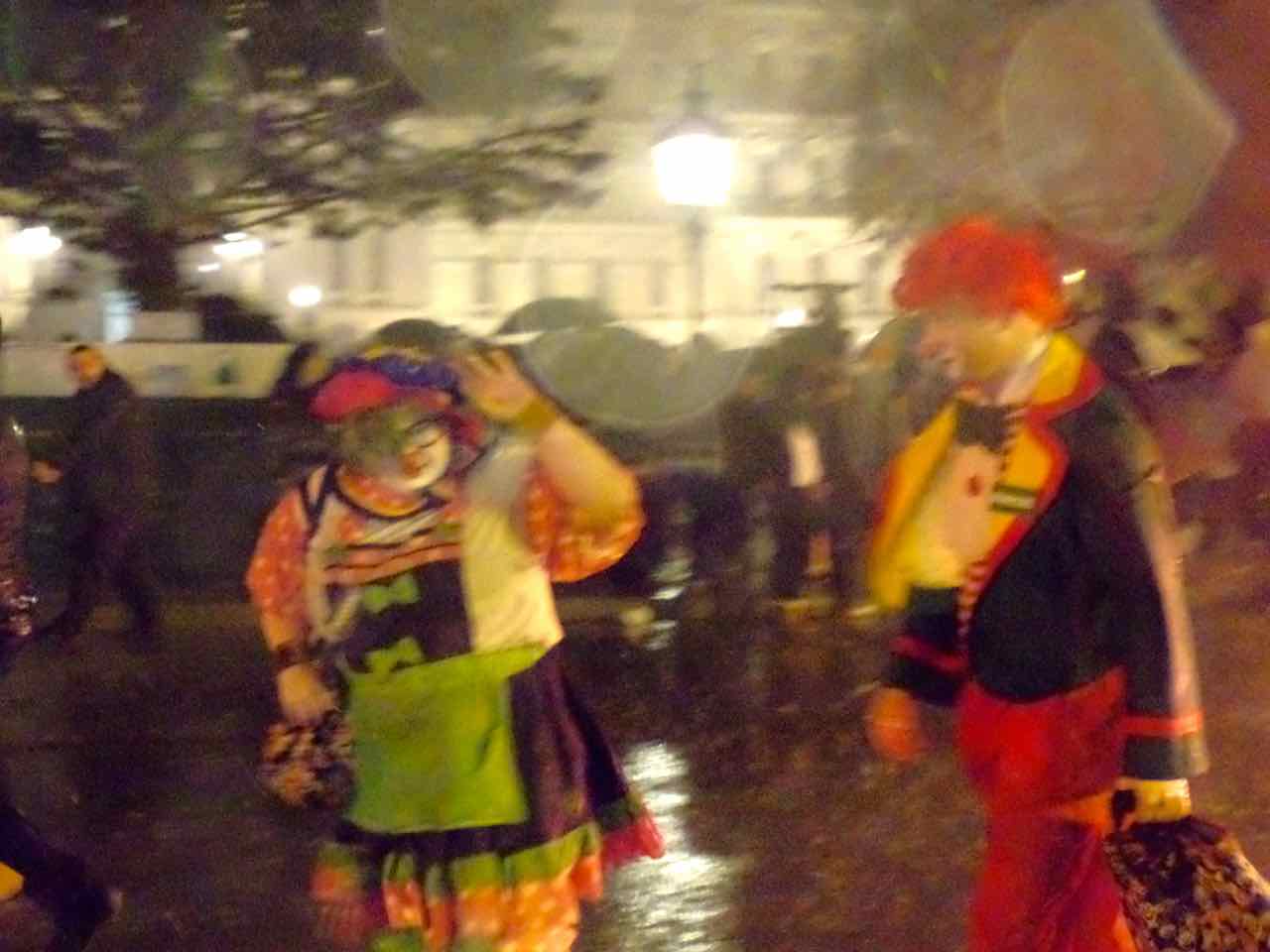 Last folks I saw before the parade completely broke apart and people were urged to find safety: a couple of clowns. They were shaking hands and giving something (candy?) to kids on the sidelines before all sense of order collapsed. 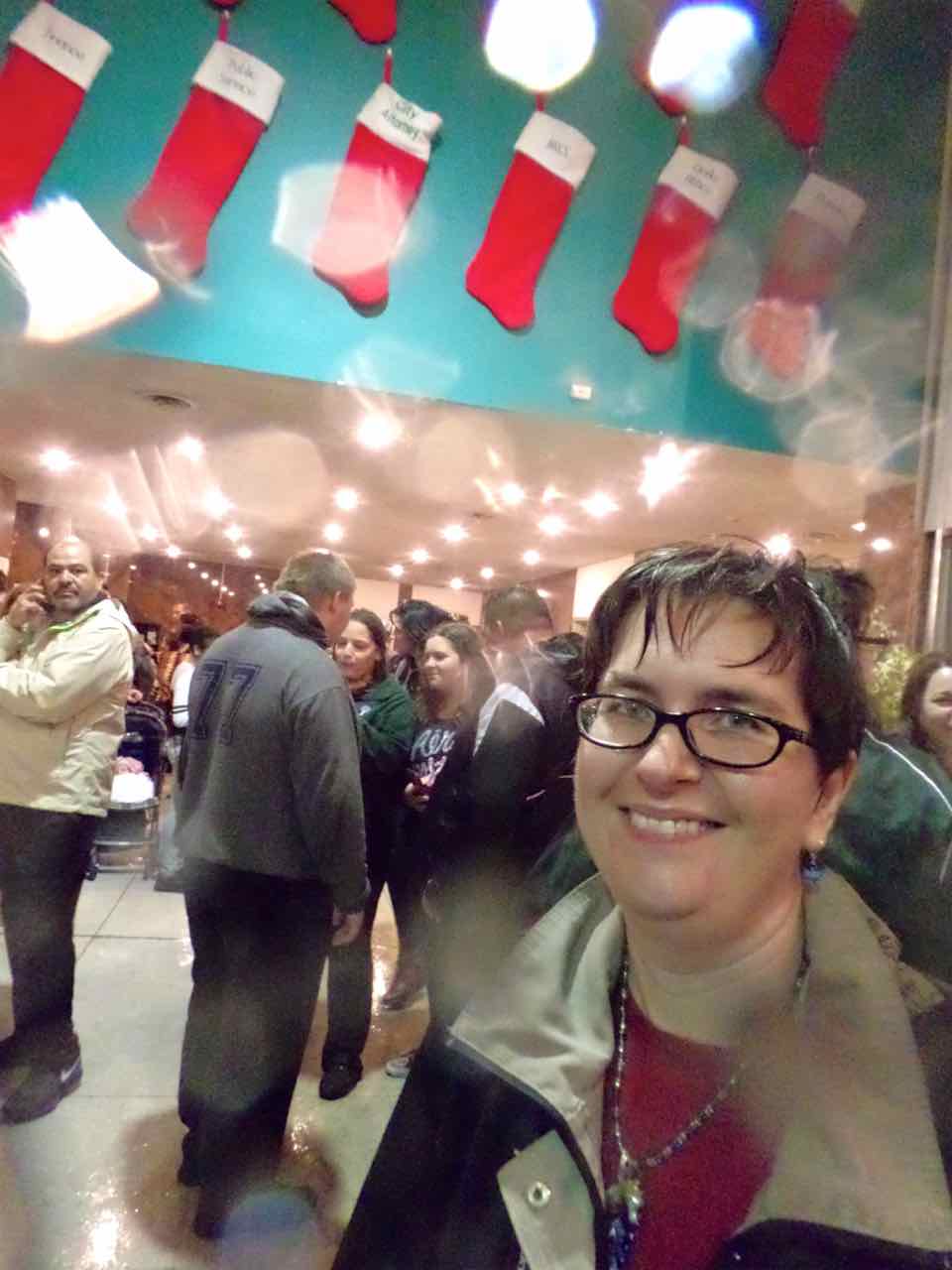 Shelter! We found it inside City Hall. Here's

bunny_hugger dazzling and radiant and soaked throughout, after my camera had been able to defog from moving suddenly inside. The stockings above her are labelled for the city departments, like Public Services and the City Attorney and all that. 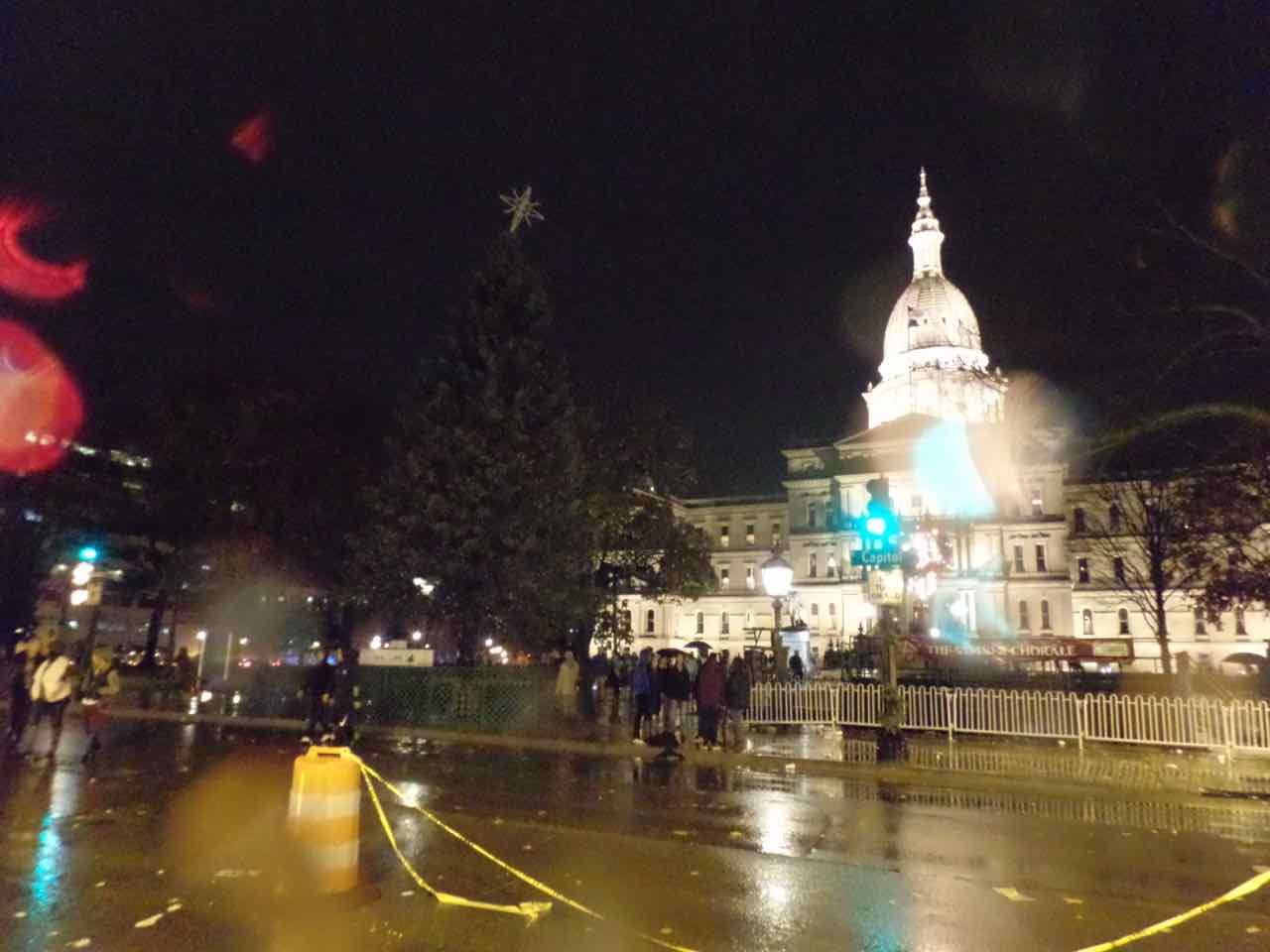 What we saw after. It was still drizzling but you can see how stuff broke down. The police tape's snapped, there's debris all over the place, and the five-foot-tall star topper for the tree is listing dangerously north-by-northwest. 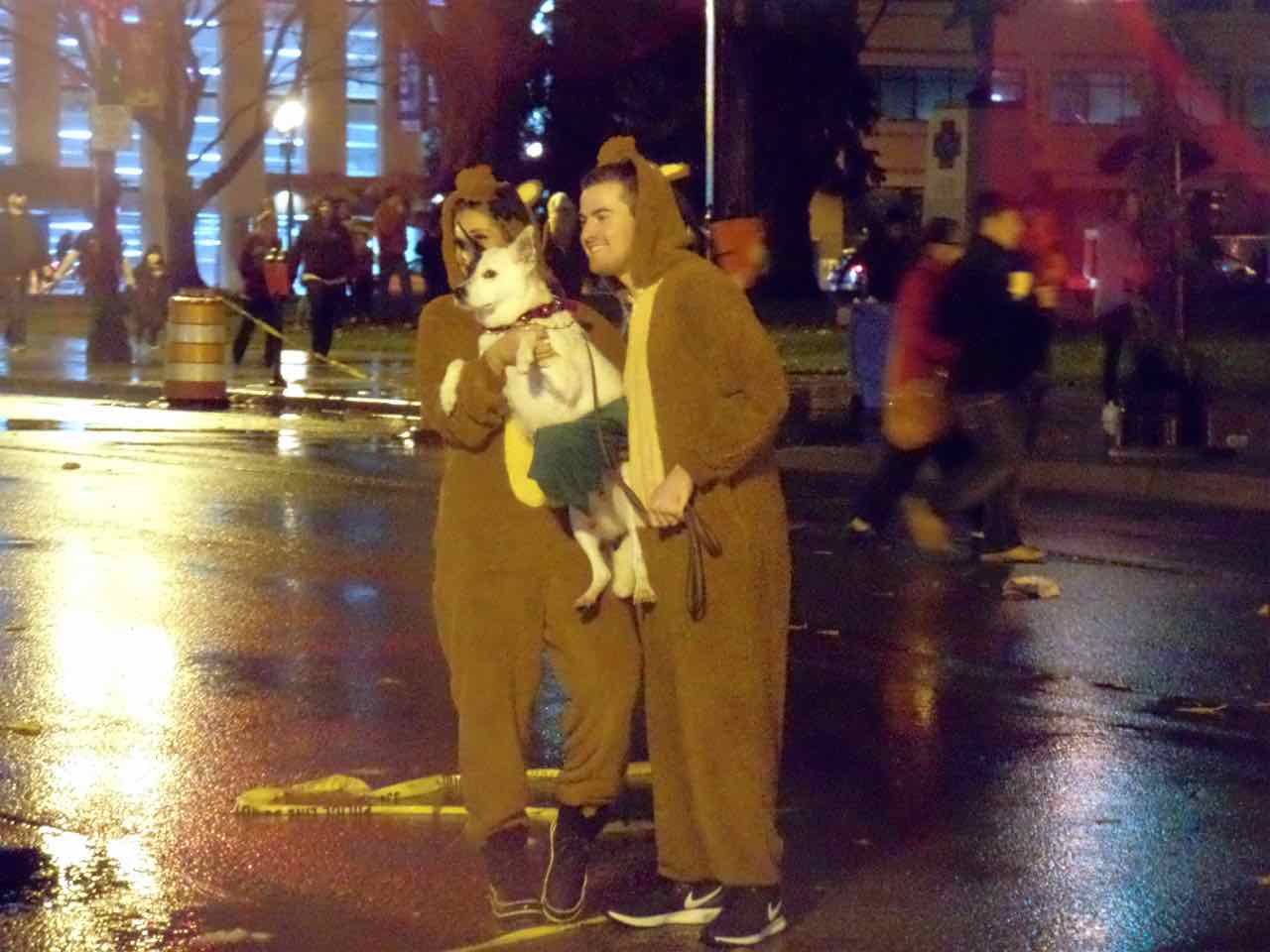 Still, a couple folks in reindeer costume were happy to pose for pictures. I don't know if they were in the parade or if they just went to the parade in character like this. Either way is great. They also took a lot of pictures for people who wanted them.

Trivia: In 1929 NBC produced a book All About Amos 'n' Andy answering questions frequently asked about the series; one of the four most commonly asked was about Freeman Gosden and Charles Correll's color. Source: The Adventures Of Amos 'N' Andy: A Social History of an American Phenomenon, Melvin Patrick Ely.

PS: A Thanksgiving Thought Fresh From The Shower, if you want a harmless puzzle. Don't we all?