So what's my humor blog been up to this past week? This.

Now back to the 4th of July and the Lugnuts game. 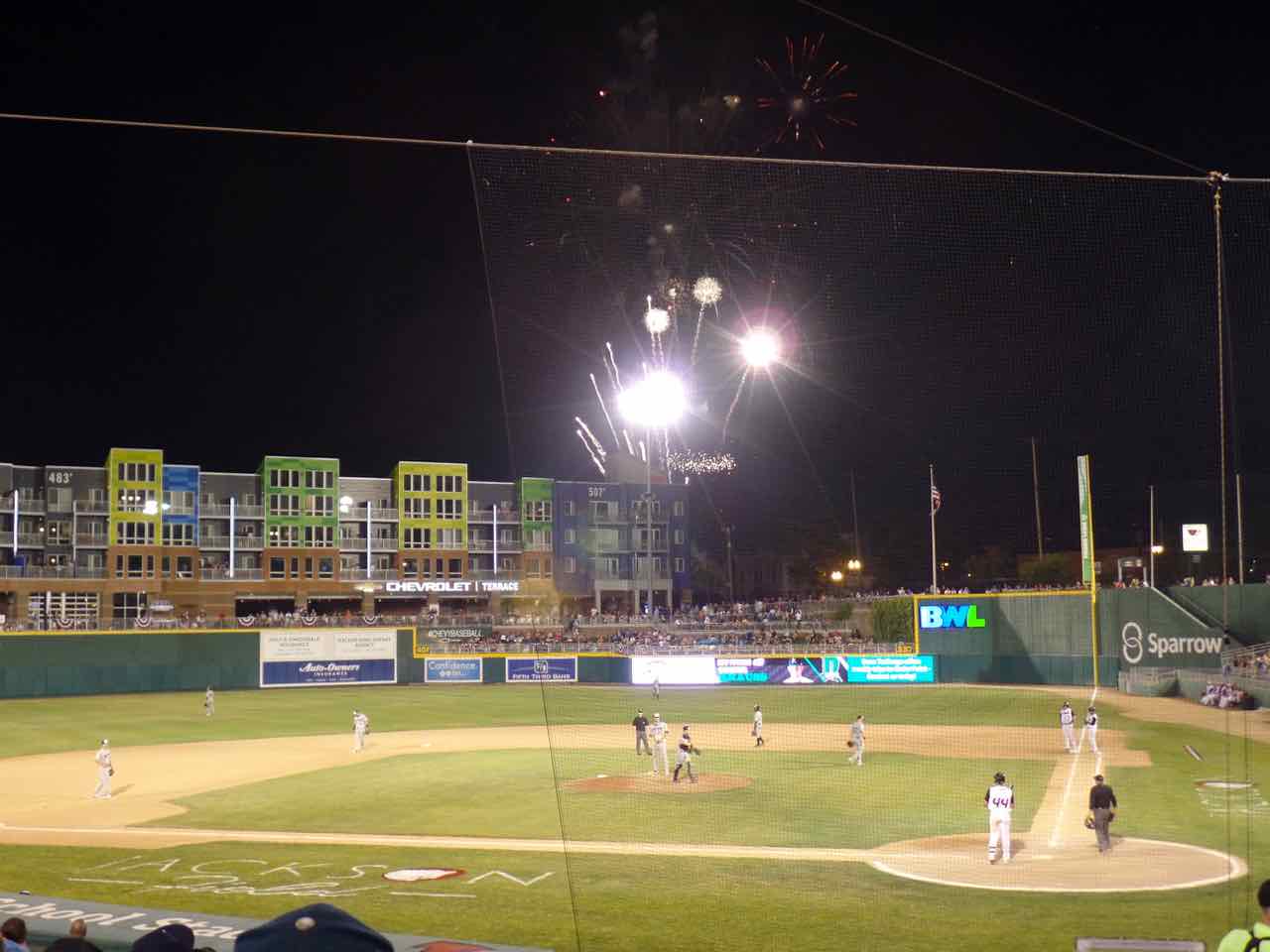 Real overreaction for a guy getting to first base. The city's fireworks started up about ten minutes after 10 pm, revealing that the synchronization we thought existed between the ball game and the city fireworks was actually just coincidence. Or the city gave up on the game ending anytime soon and went ahead with it. 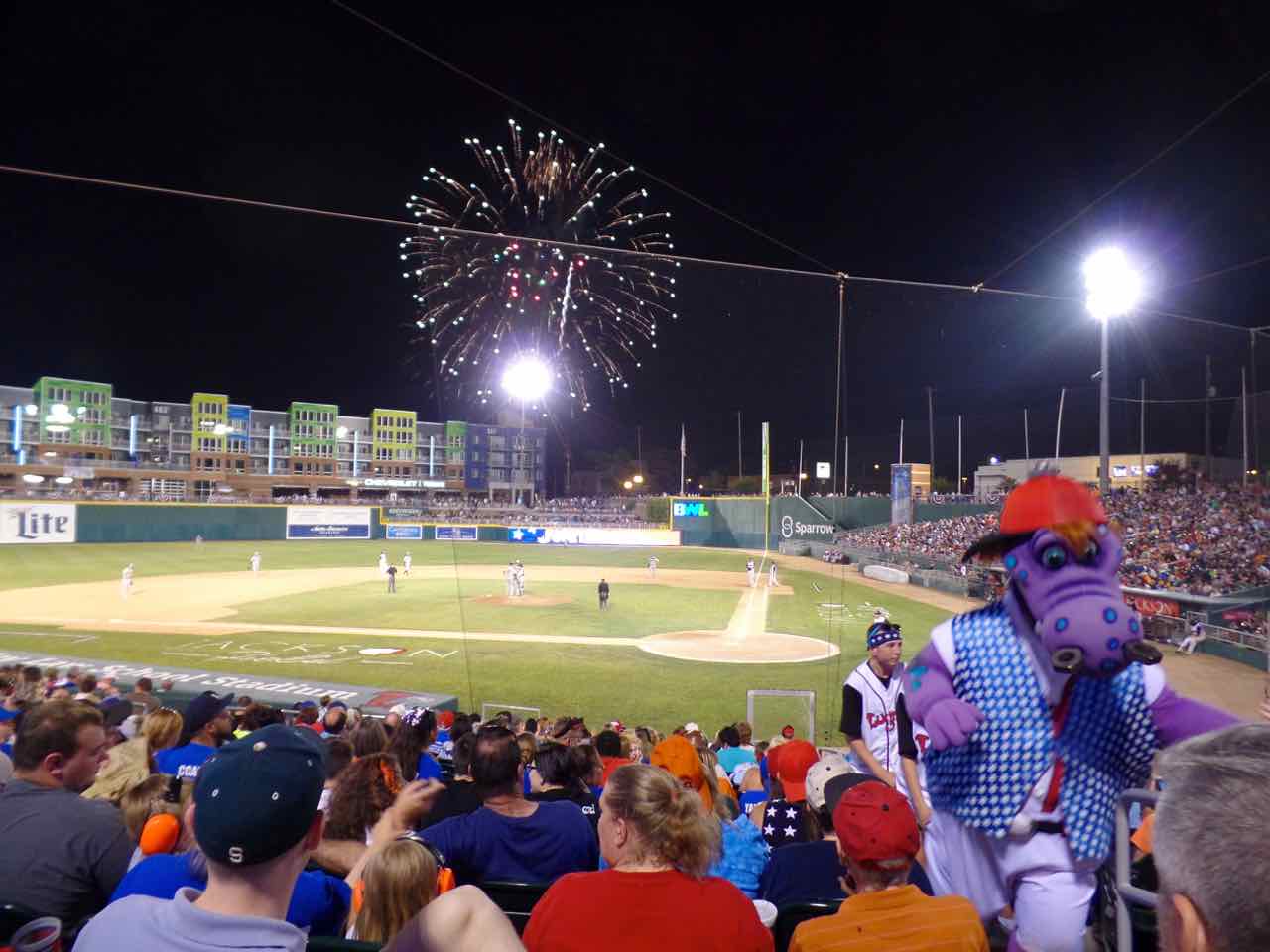 Big Lug, fireworks, and a conference on the mound. The city fireworks went on for like twenty minutes and so did the eighth inning. 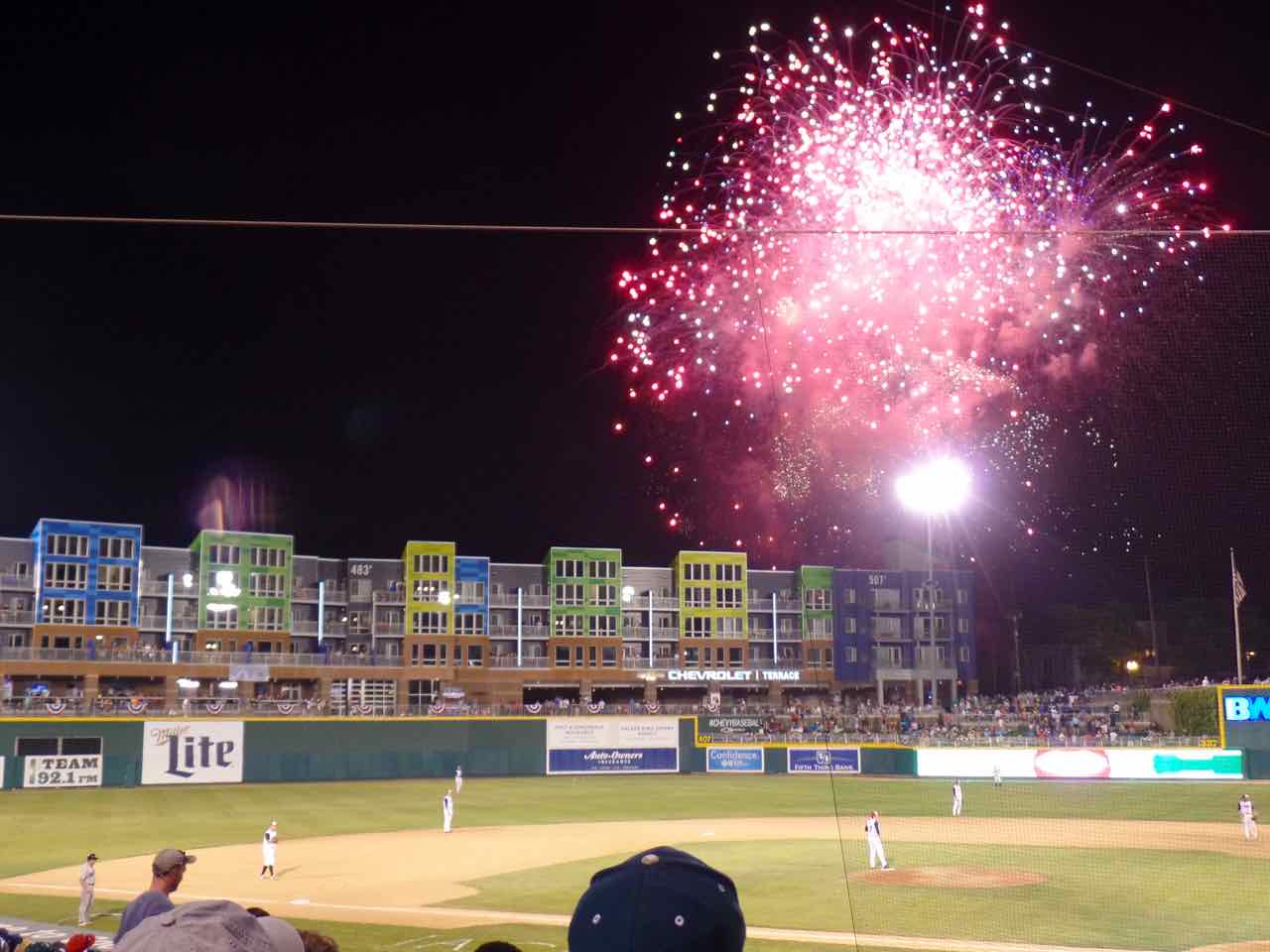 Grand finale for the city's fireworks and the approaching end of the eighth inning which was otherwise so very good to the Lugnuts. They'd score a win, rare in our visits to the park. 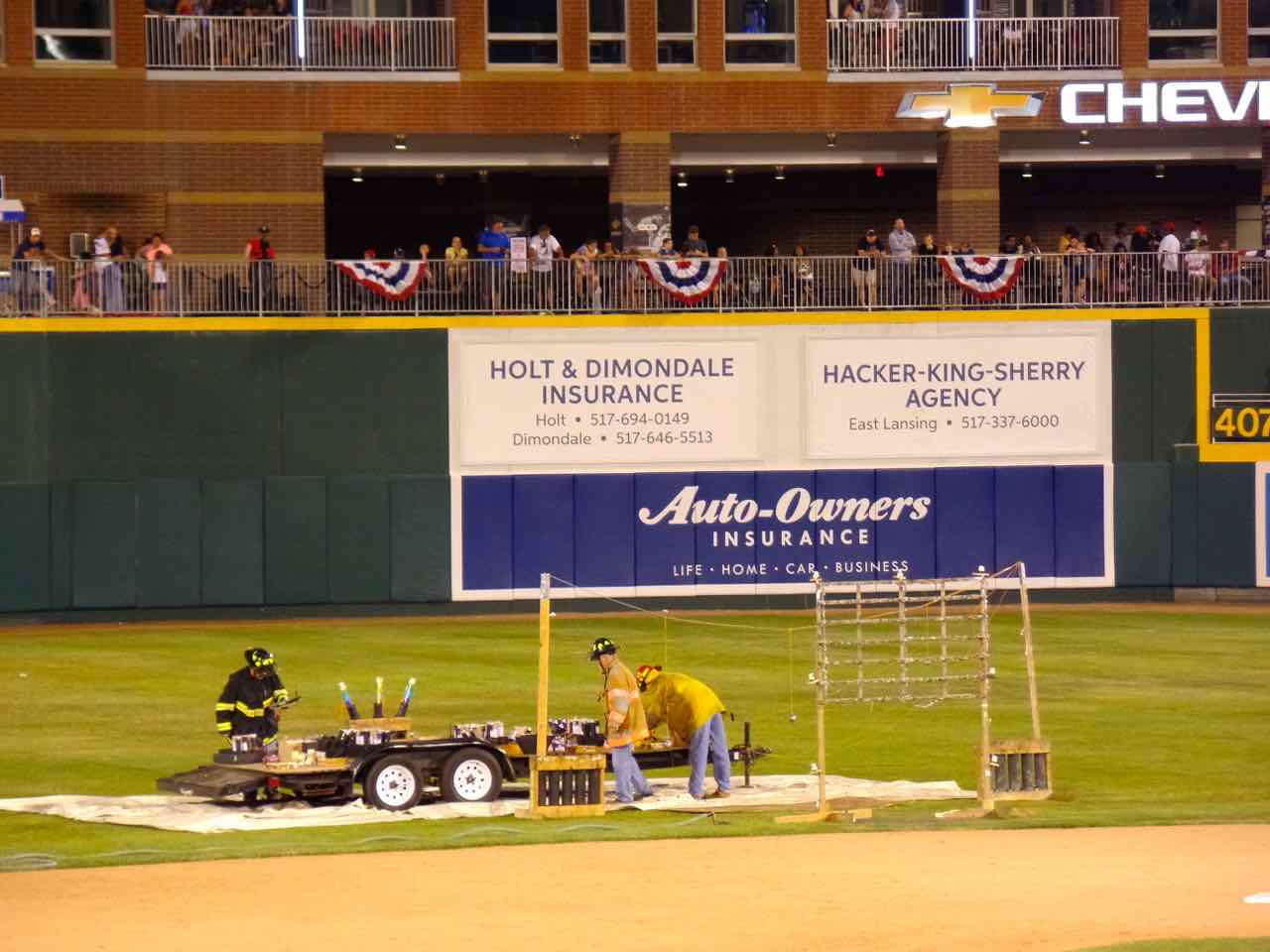 After the win and long after the city fireworks the Lugnuts stadium fireworks get set up in the outfield. Before the condos were built the fireworks were put up on the grass-seating area beyond the outfield fence during the last innings of the game. But there's buildings there now, and not enough grass-seating area to use for fireworks setup. So they have to truck a show out after the game ends while the stadium does some post-game gimmicks in the infield. 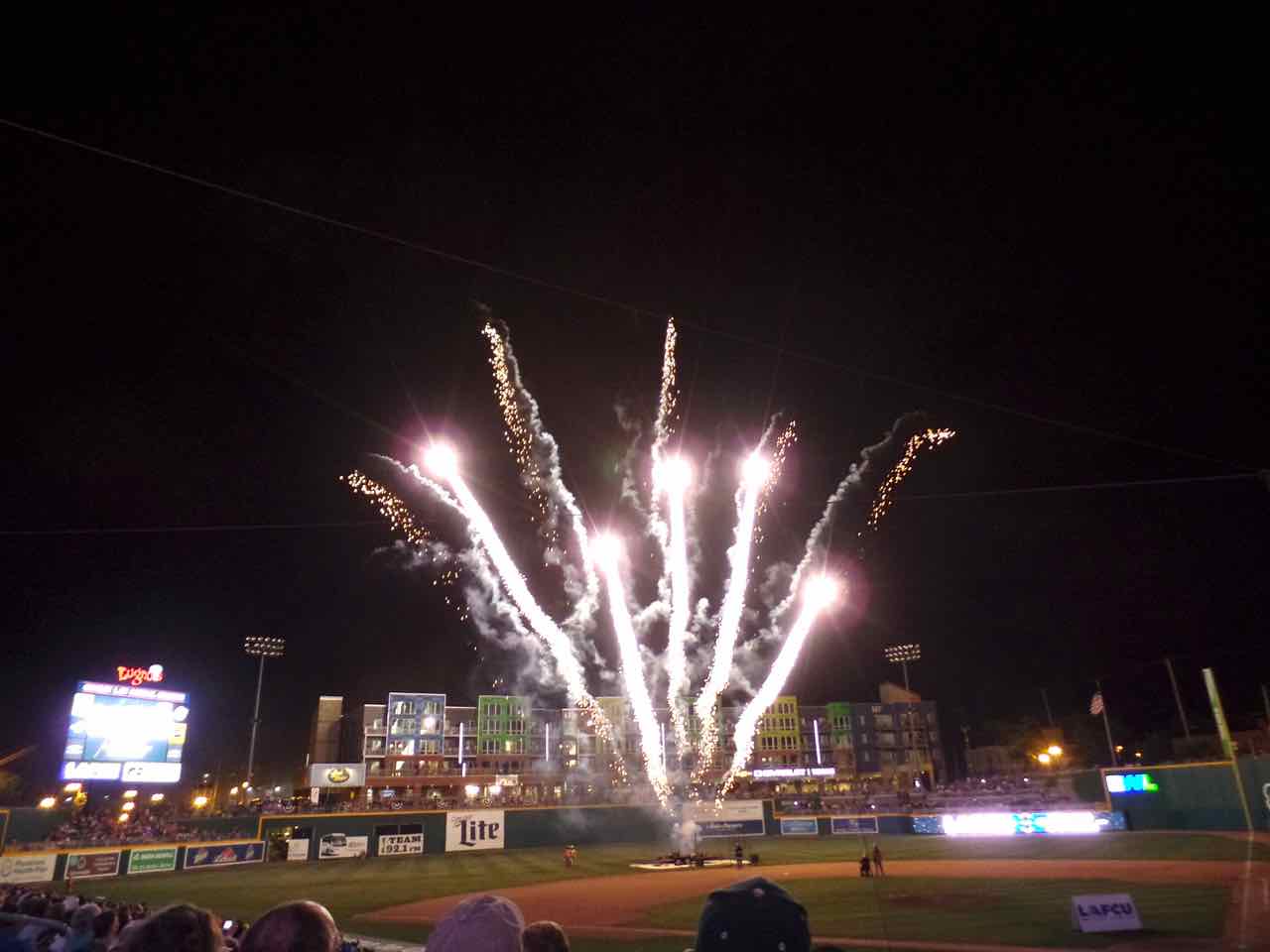 Ah, but once the fireworks get going. The in-stadium fireworks are smaller, of course, than the city's show. But your'e also right there, underneath them. During stadium construction the fireworks were also a particularly small performance. But since the condos were finished they seem to be back to a reasonably full and satisfying post-game show for weekend and 4th of July games. 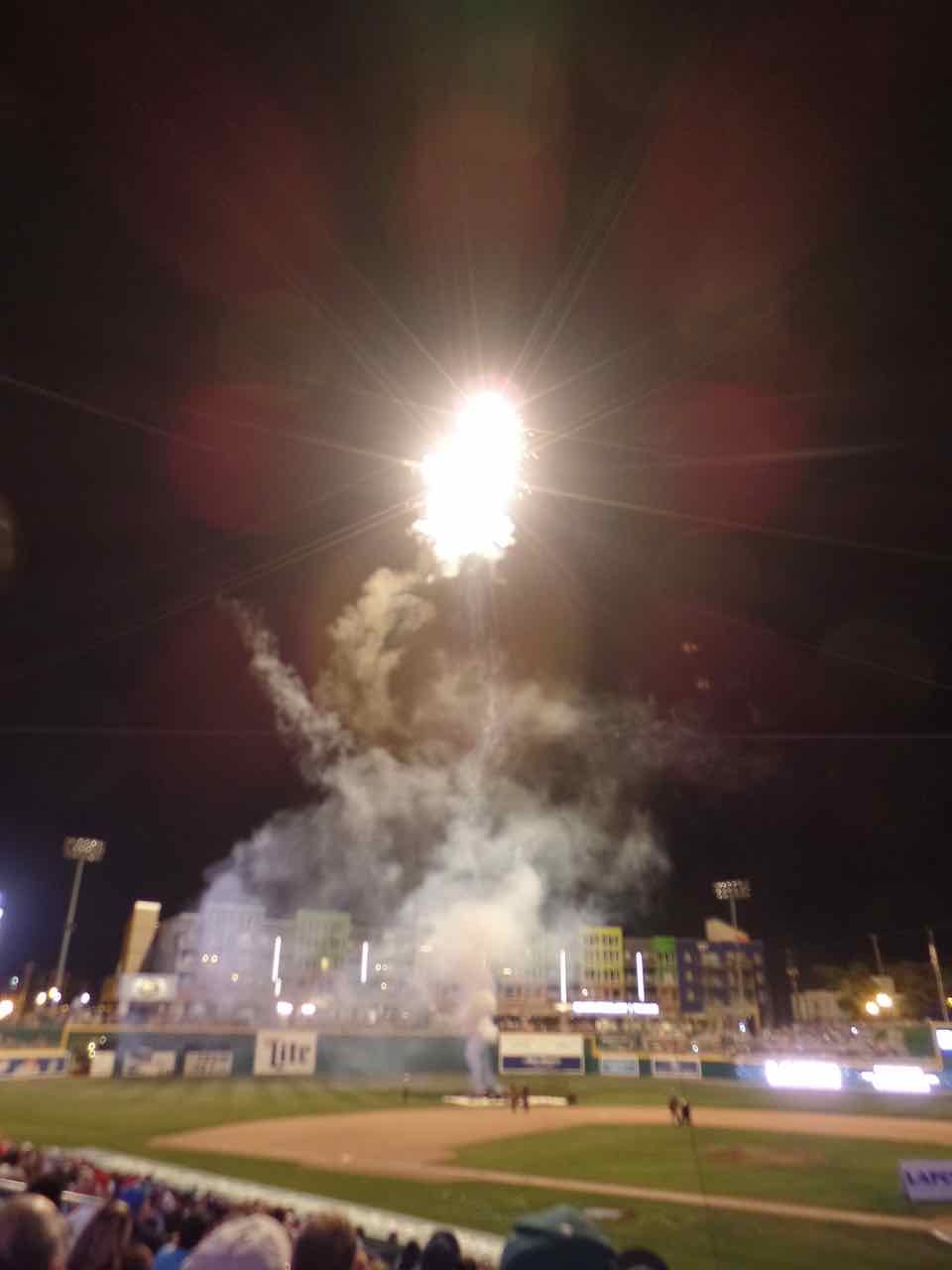 Finale of the stadium's own fireworks show and one of those shots that threatened to break my camera. I like the blurriness of this, in the circumstance.

Trivia: In El Paso on an early-1920s tour of the Pantages circuit, Fred Allen was arrested and fined $10 (plus court costs) for using ``vile language'' in front of a woman. Source: Fred Allen: His Life And Work, Robert Taylor. (Per Allen's report, anyway. If Taylor verified the arrest and trial he doesn't provide citations.)

PS: When Is Thanksgiving Most Likely To Happen? (Spoiler: ``November''.)