Be one of the comfortable people

If you haven't been following my mathematics blog directly, or its RSS feed, then here's what you missed the past week. Here's your chance to fix that by enjoying:

Saturday at Pinburgh we were at liberty; we weren't in the finals and so had nothing particular to get to at any time, and could take in the show and any panels or events that caught our fancy. Got many more pictures of this. 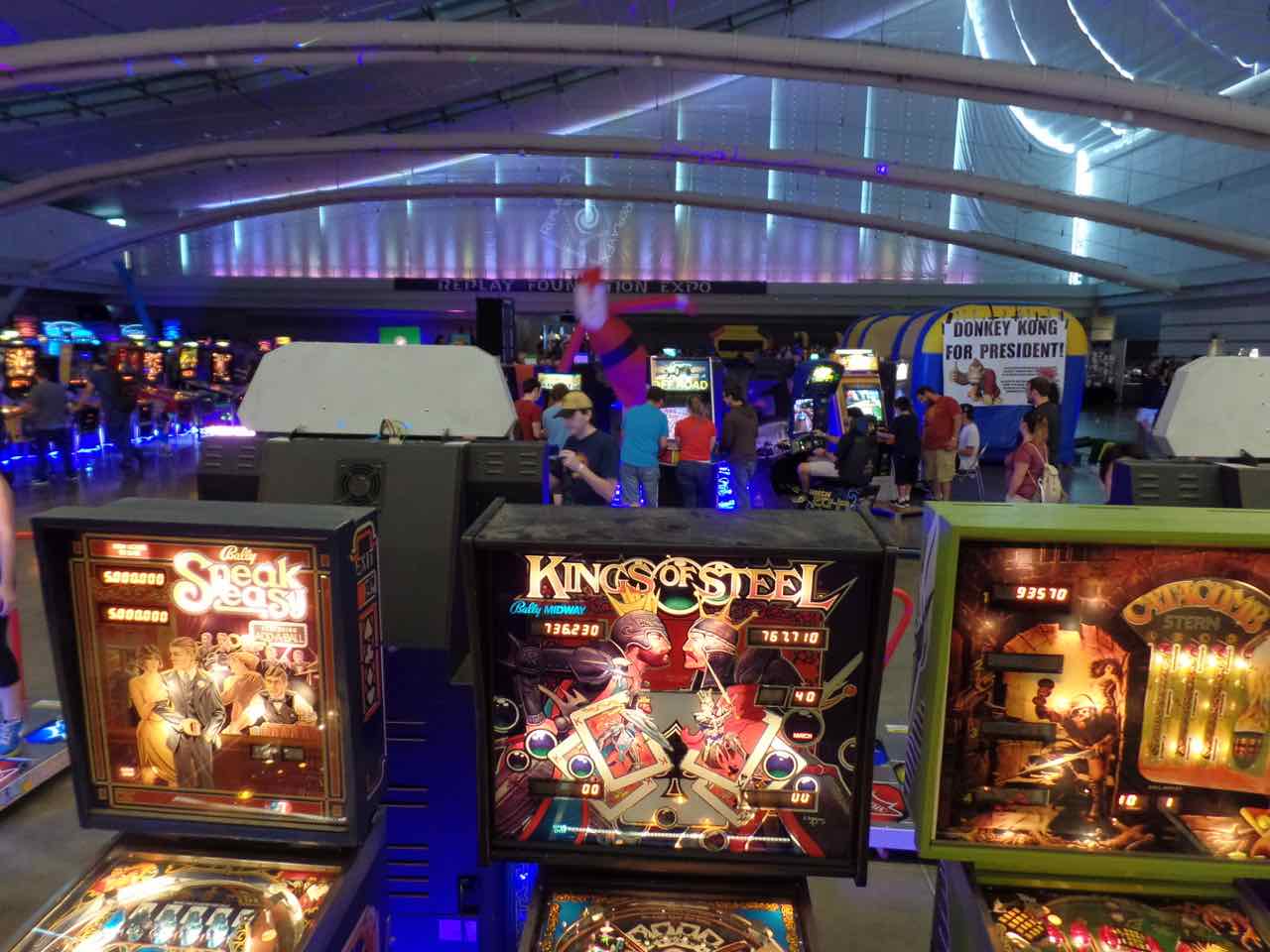 Kings of Steel, one of the first games

bunny_hugger and I played while at liberty on Saturday. I ... had a surprisingly good last ball, overtaking

bunny_hugger on the bonus, which she might yet forgive me for. Note in the background the Donkey Kong For President banner. Back in July it was a very funny idea to imagine as President a short-tempered, irrational building-wrecking, woman-grabbing primate stomping and throwing barrels of flaming oil at defenseless people. 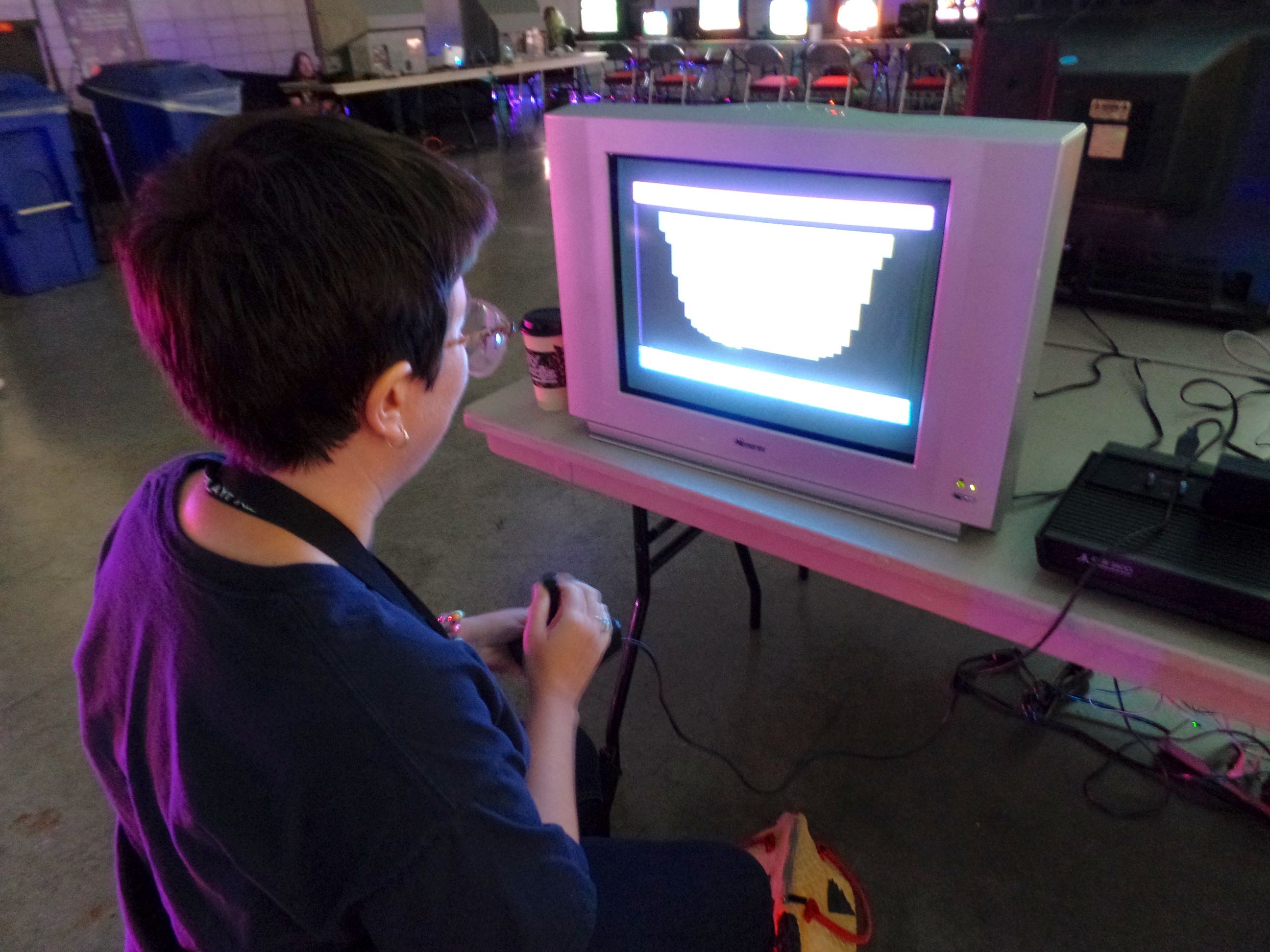 Over on this side of things they had vintage video game consoles set up. Here,

bunny_hugger plays E.T. which they had because of course. She didn't do well. I don't remember playing, but if I did, I did worse. 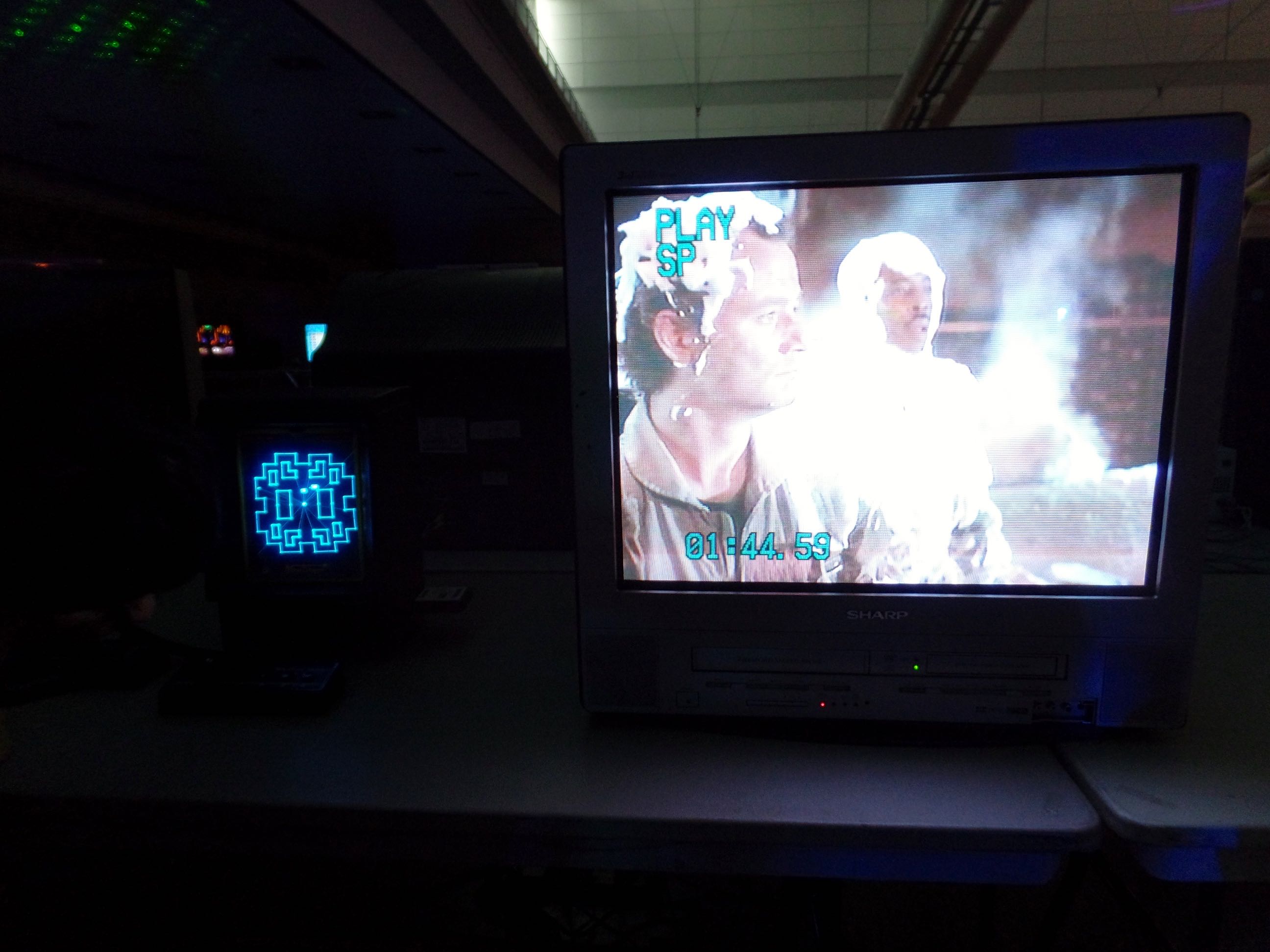 They also had a Vectrex console, which was dazzlingly bright. To show off how bright it was, see it here competing with the light from a 19-inch Sharp TV playing Ghostbusters '84 because of course. Yes, that's a TV with built-in double VCR, playing a VHS tape in glorious-ish pan-and-scan, which was charming. 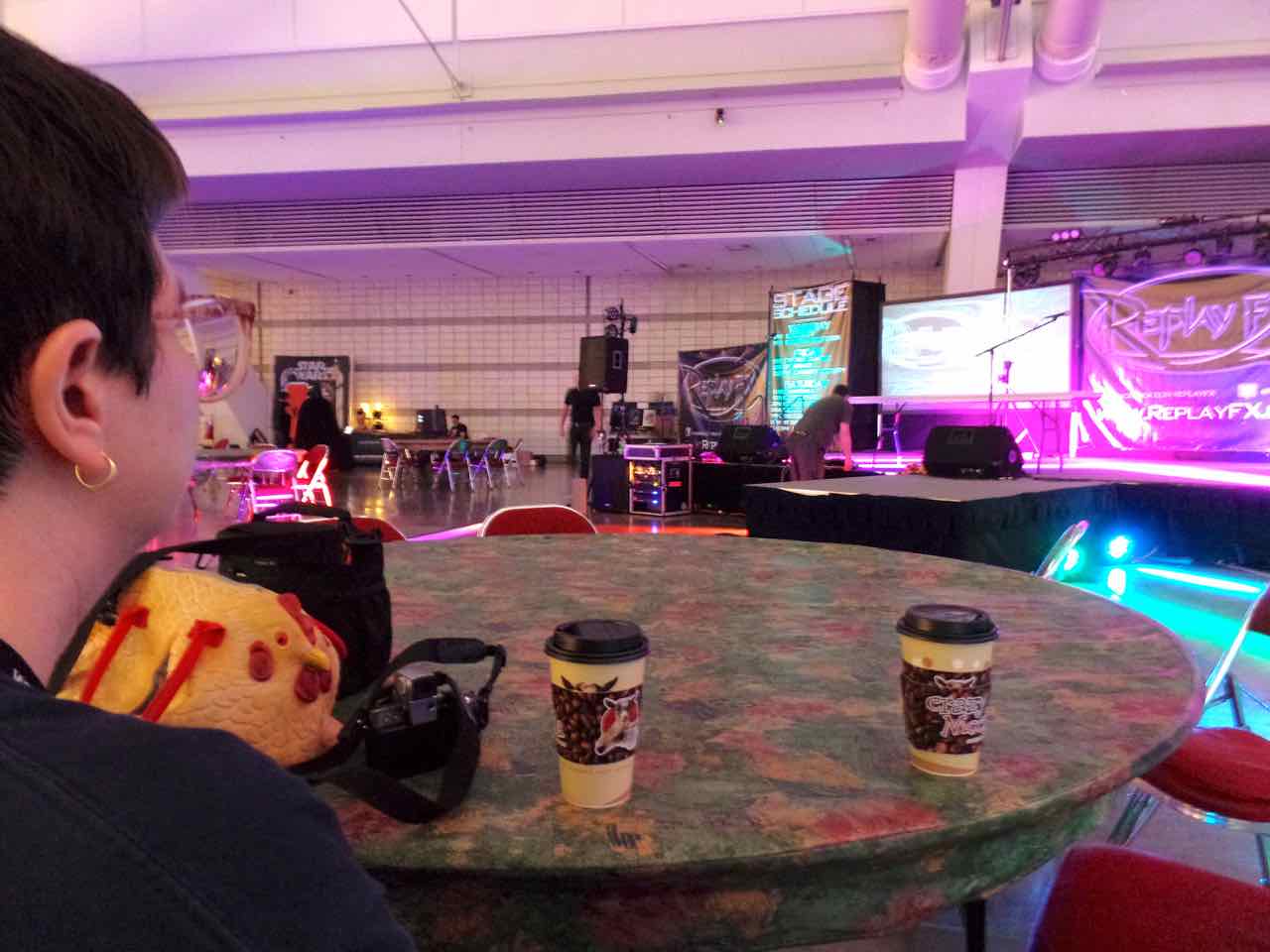 Waiting for the first concert of the day, a chiptunes performance. We'd wait for a little while and eventually realize we'd have a lot longer to wait, but we did worry about losing our good seats. Note the famous chicken purse. Now that you have, compliment 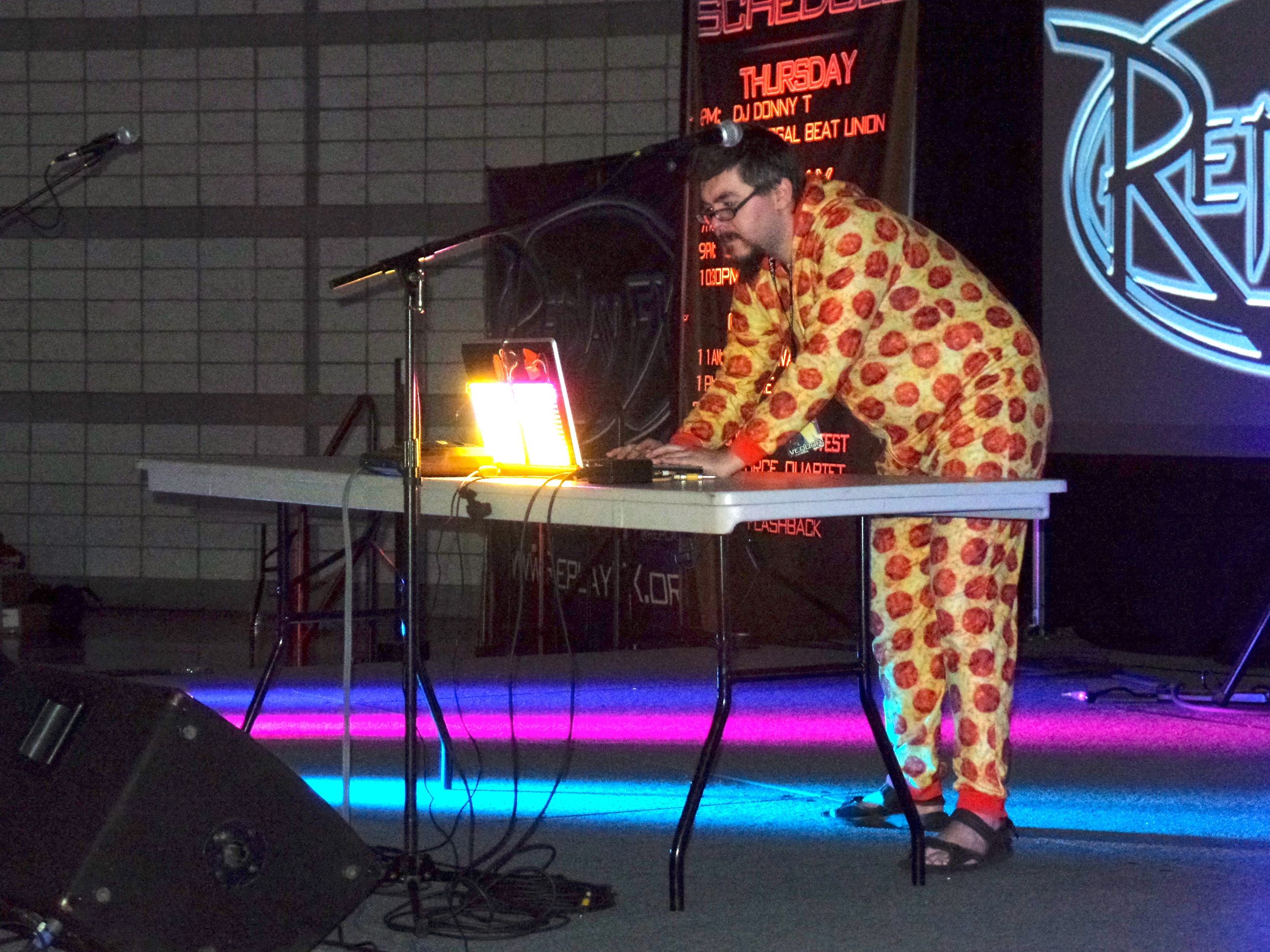 The chiptunes concert in action! So this guy fiddled around with things a good while. I think this was the one featuring Nine Inch Nails tunes, which I don't know but which our friend MWS is a fan of. Unfortunately he couldn't make it; I believe he was feeling ill after the night before. In front of his laptop there was some lights panel that did all kinds of complicated shows, none of which are interpretable in a still picture. Sorry.

Trivia: In September 1970 railroad critic and gubernatorial candidate Milton J Shapp started a whistlestop tour on the Penn Central in a four-car campaign train. Before it reached its first stop the air conditioning in the press car broke; by the end of the first day the toilet in Shapp's car backed up, flooding the candidate's luggage; his car's air conditioning broke down. Then the cooling unit in the main sleeper car broke, and no hot water was available for washing, and the drinking water was warm. In Pittsburgh the next day a hose coupling burst, covering Shapp in steam as he was beginning his address to the crowd. Shapp won election. Source: The Wreck of the Penn Central: The Real Story Behind The Largest Bankruptcy In American History, Joseph R Daughen, Peter Binzen.