I feel the blues coming on

So my Aunt Evelyn died last week. She was my godmother, one of my mother's core college friends. The second to die. It wasn't unexpected. She'd had cancer, and it had been getting worse. A few weeks ago they took her off treatments, and brought her to hospice. I'd tried to call her, to say something, but she wasn't able to answer the phone when I did call. I sent a card, thinking as I picked it out and wrote it that a get-well card, or get-well wishes, were just ... absurd. But I did anyway because what's there to do otherwise?

bunny_hugger, then at work, to tell her of my plan and let her protest if this were impossible. And then in a tortured phone call with my mother worked out just how I might get to the Rhode Island ceremony. Flying to Providence was expensive. Flying to Boston and having my brother there pick me up --- oh, he's in Amsterdam this week on a family holiday. Flying to Newark where my other brother was, to visit friends, and riding up with him --- oh, Newark's crazy expensive. Flying to Baltimore, that brother's home, and riding up with my parents who were driving up from Charleston? That's possible and much more affordable. The flight went through Newark.

Flight booked, with a scary lack of comment from

bunny_hugger (she was already heading home and didn't see my e-mail) I got to essentials. I have one good suit, the one I got married in, when I was six years younger about 25 pounds lighter. It still fit. My shirt fit too. My tie --- I didn't think a purple paisley tie would be appropriate. At the funeral my uncle would wear a dark purple paisley tie. But I knew one place to get a Good Quality Tie, the Men's Wearhouse on the east end of town. They were having a buy-one-get-one-free deal on ties. I couldn't imagine needing two black ties, but felt like, well, free tie? I got one that's completely smooth, and one that has a subtle diamond patterning. The clerk said they were lovely and asked what event I was buying them for. I felt trapped between my compulsion to answer honestly and not wanting to dump bad emotional stuff on someone who has to deal with the public. And then before working this out just said the honest, ``My aunt died and I need it for the funeral.'' She didn't act startled. They probably get a fair number of people coming in to make emergency purchases of grown-up clothing ahead of funerals.

bunny_hugger, who it turned out had been at the same Meijer and the same time getting something from the Pharmacy department which, you might ponder, is pretty close to where you get travel-size toothpastes and deodorant and Listerine. Also while driving home we both listened to the same episode of the same podcast. Yet somehow we technically weren't there together.

I'd leave Saturday. This would cancel my attending a trivia-night league finals. MWS and his family go to restaurant trivia nights, and we sometimes go along, and they had made it to season finals. They needed a fourth for the event and thought I'd be perfect for it. Instead

bunny_hugger had to go, messing up her plans to prepare for the coming semester. They didn't finish in the top ten, where the money prizes were. But not for

bunny_hugger's participation; she kept a log of the questions and we worked out that, all else being the same, there was just one question she didn't know that I did, and she was more confident of the right answer on several questions than I was.

Also that I'd miss Sunday: pinball league finals, in Fremont. This would be another high-value event, although not so high as the Baby Food Festival whose story I'll get back to after all this.

bunny_hugger and MWS would go to it, and she'd get a fourth and a sixth place in the two events. The fourth place should give her a good lift in the state rankings. The sixth place, eh, a slight boost. On their way back they were besieged by a massive storm, a nightmare of low visibility and downed branches and a storm that kept acting like it might let up and not doing so. I'd miss driving through all that, being, instead, at the wake and then a dinner afterwards at one of my aunt's favorite restaurants.

My aunt had a reputation as a Rain Goddess, as for a while in the 80s and 90s heavy storms and, in one case, a hurricane converged on events she was planning to attend. It's a bit nice to imagine she was thinking of

Trivia: In September 1803 Sunday was restored as the day of rest in France. Source: Mapping Time: The Calendar and its History, EG Richards.

PS: Reading the Comics, August 24, 2018: Delayed But Eventually There Edition, getting me up to last Saturday on the comic strips at least. 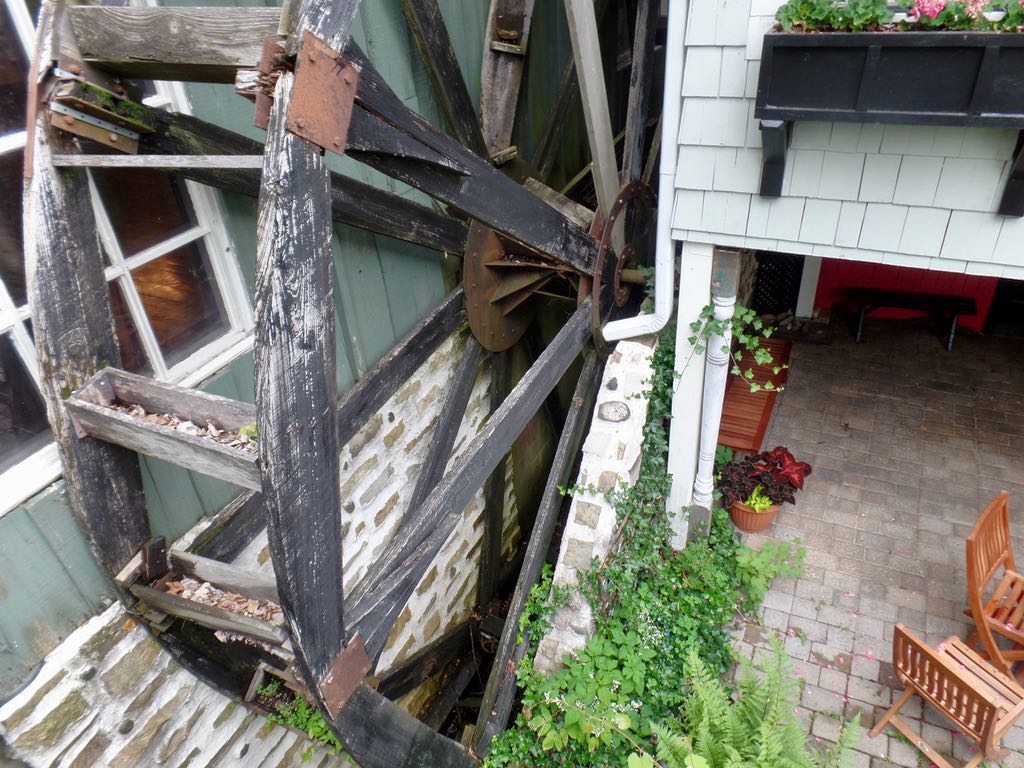 And the waterwheel, which isn't functional, but which I think I remember

bunny_hugger learned had never been functional and was just a bit of scenery for the attached restaurant. 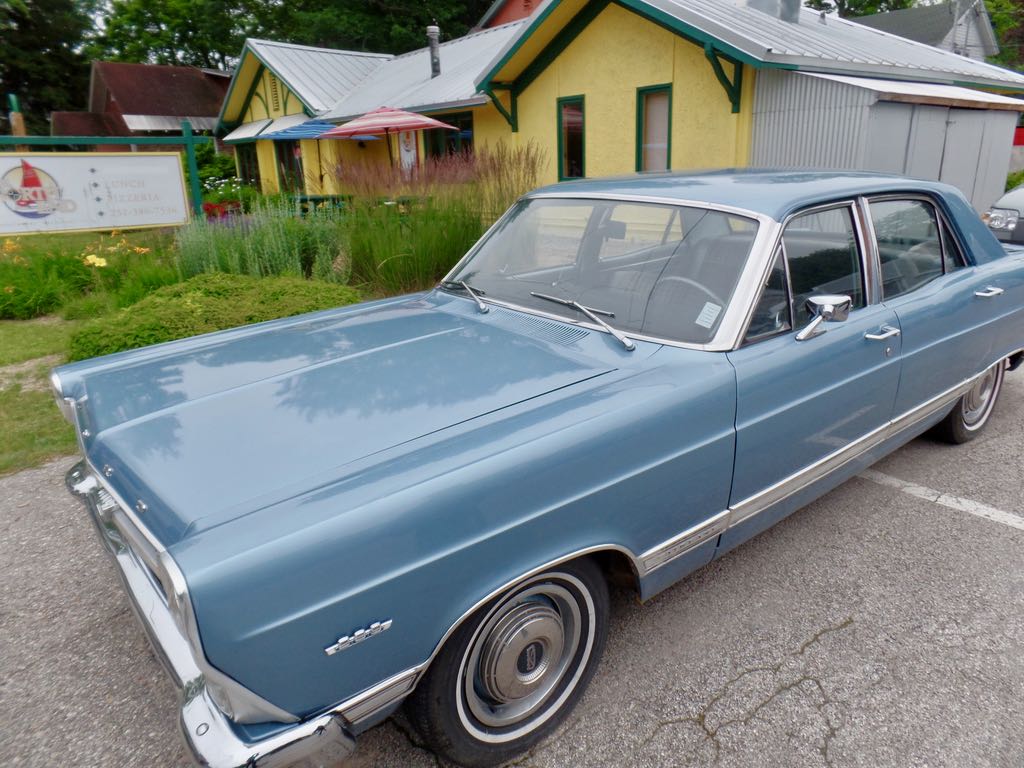 Old style car, one of several parked at the edge of town. Going ahead and guessing my father owned one of these back in the day, but that's just playing the odds. 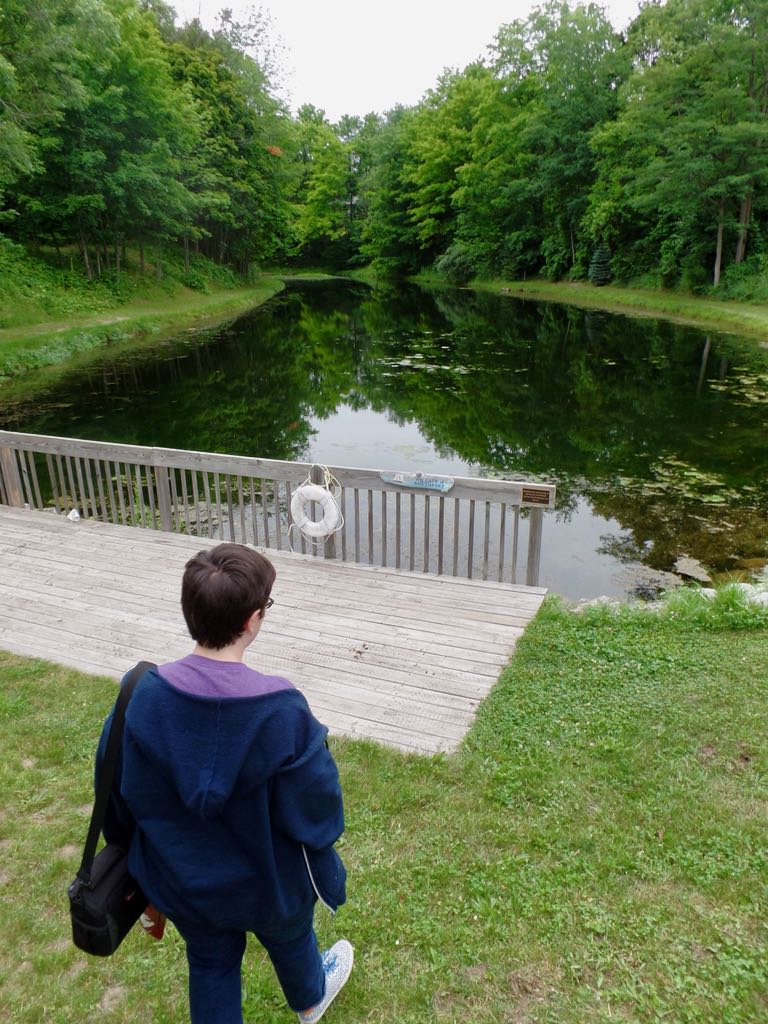 Approaching the old mill pond at the north end of Northport.