We get bruised; we get battered

I drove myself to Detroit airport, figuring the long-term parking for a half-week would be cheaper than the Michigan Flyer ride to East Lansing. Maybe not. It did make scheduling easier. Flying to Newark was uneventful except for a very loud man in the row behind me explaining to his poor seat-mate how he worked out really cheap airfares by booking one-way flights to other cities with connections in the city he wanted to go to, and only taking carry-ons so he could skip the last leg of the flight. He explained this at length. It reminded me of the time ages ago that a paper-products manufacturer explained to a woman who (I thought) feigned fascination well about how toilet paper's designed to fall apart when wet while facial tissues are designed to hold tight. I wondered how it is every commercial air flight doesn't include a moment where some woman garrotes some man explaining things.

Flying from Newark to Baltimore was delayed some because I was flying United and this always happens, but I was able to keep my parents updated and they met me in the most confusing way possible: telling me what baggage carousel my luggage would be in, regardless of what the airline told me, and then meeting me at a door that as best I can tell was at the opposite end of the airport. Or just felt like it. We got to my brother's place --- the brother who was in Newark that day --- about midnight, and my parents immediately went to bed. I talked a little while with my sister-in-law while she also played some Xbox games I don't understand about blocky people doing stuff like throwing knives, or riding a boat while a shark comes after them. One was about hiding out from a killer clown for the four minutes of a simulated night. All right.

We were supposed to leave at 7:30 so I just assumed someone would wake me, like, 45 minutes to an hour ahead of time. I got woken at 7:15 and staggered past nieces incredibly excited to see me into the kids' shower upstairs, that I guessed was the one I was supposed to use? Couldn't find any soap, but they had about 42 bottles of body wash, so I could take a hurried and goopy shower before setting out just a bit late. My younger niece wanted to know why I wasn't staying and my parents promised that I'd be back in two days. I took this to mean we were staying in Rhode Island two days, and hurriedly grabbed an extra set of pants, underwear, and shirt for my duffel bag packed with what I thought I'd need for an overnight trip.

After stopping at a breakfast place that got our bagel sandwich orders two-thirds correct my parents and I drove up to New Jersey. The plan was my brother would join us and we'd all ride up together, but he couldn't get anyone to drive him to the service plaza somehow and so we ended up split, my mother and I in her car and my father and my brother in my brother's car, driving up I-95 and through the Great Connecticut Traffic Jam and yeah, I nodded off through some of that, but in fairness, NewsRadio 88 was getting really boring by then. Even the crazypants dubious financial-advice show wasn't all that interesting. I didn't remember news radio being quite this awful when I used to listen to it regularly.

The hotel was this pretty charming little place in an old-looking house with long twisty and imperfectly levelled hallways that I just assumed my parents had used sometime when they'd been in Rhode Island and found Evelyn for some reason unable to put them up. Not so; my brother had found it, using one of those web sites connecting you to hotels that have vacancies that night. Anyway we split up, getting dressed for the wake. There I learned the blue dress shirt I'd grabbed was too tight for me to wear. I momentarily panicked about what about the purple shirt I was going to wear at the funeral, but remembered: no, I tried that on the day before, before setting out to buy a tie. I'd just have to wear the purple shirt both days and hope that nobody noticed and that I didn't stain it in any important ways. I ended up going to the wake in the same outfit I'd wear at the funeral, except for the tie. My brother, who has a job that's split between telecommuting and meeting people who head divisions, wore one of his have-a-meeting suits.

The wake was ... well, kind of what you'd expect. Well-attended, certainly. I knew some of the people there, relatives of my aunt and uncle or friends whom I'd seen when they had some big event. Still my parents were very good about playing introduction so that I could have a person's name in mind from the moment my parents said it until the moment my parents had finished saying it. My other aunt, that is, the other of my mother's quartet from college, was there for an hour and my brother and I largely moved in her orbit through that. (She couldn't be at the funeral; she still teaches, and the next day, Monday, was the start of her classes.)

The casket was open and it wasn't until seeing my aunt's body that I really choked up, for the first of many times those two days. She did, as they say, look great, posed in the way that haunts you with the suggestion she might open her eyes and sit up, abashed at all the fuss. She was in her wedding dress; my uncle said to people how they had figured, you know, she'd only wore it the once. He thanked me and my brother for coming out, and for being pall-bearers, and again I choked up trying to say how I was glad that I could.

It was several hours of hand-shaking, and sometimes hugging, and telling people that I was glad to see them except for the circumstances. And saying a last farewell, or at least waiting for the chance to say a last farewell since a stream of people came to say their farewells. But we did have the chance.

Afterwards we went to one of my aunt's favorite restaurants, where my family got way too involved in the question of whether they could order an appetizer with meat in it and whether they dared order the antipasta. It was a great dinner and we ate probably too much, another of my aunt's favorite pastimes, and I got through it without staining my jacket or shirt any. We could hang them back up in the hotel room closet for the funeral the next day.

The hotel alarm clock was a hotel-model alarm clock, the sort with over 2800 buttons and no clear way to set the alarm time. I did my best to set the 'A' timer and couldn't. But as best I could tell the 'B' timer was set for 7:30 and since that was about when we needed to get up, that seemed fine. Also as best I could tell the 'B' alarm was set to sound, so that all seemed fine. The alarm did not in fact go off the next morning. 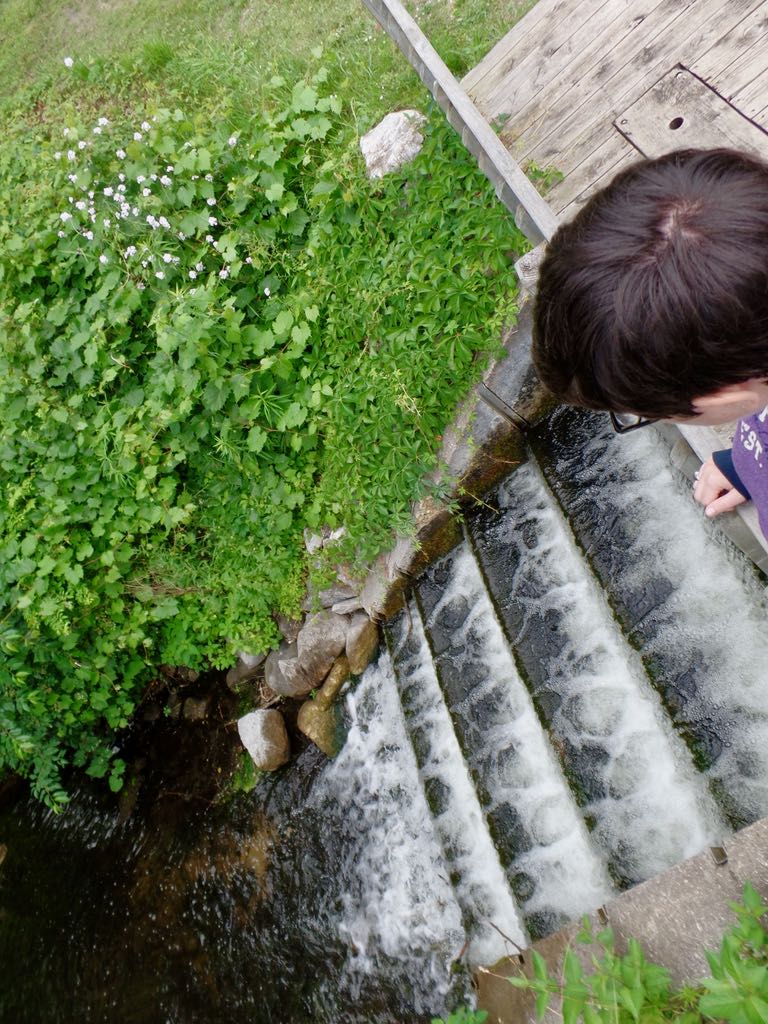 Looking over the stepped waterfall at the edge. I guess the small river runs into town and probably connects to that fake waterwheel at the restaurant, come to think of it. 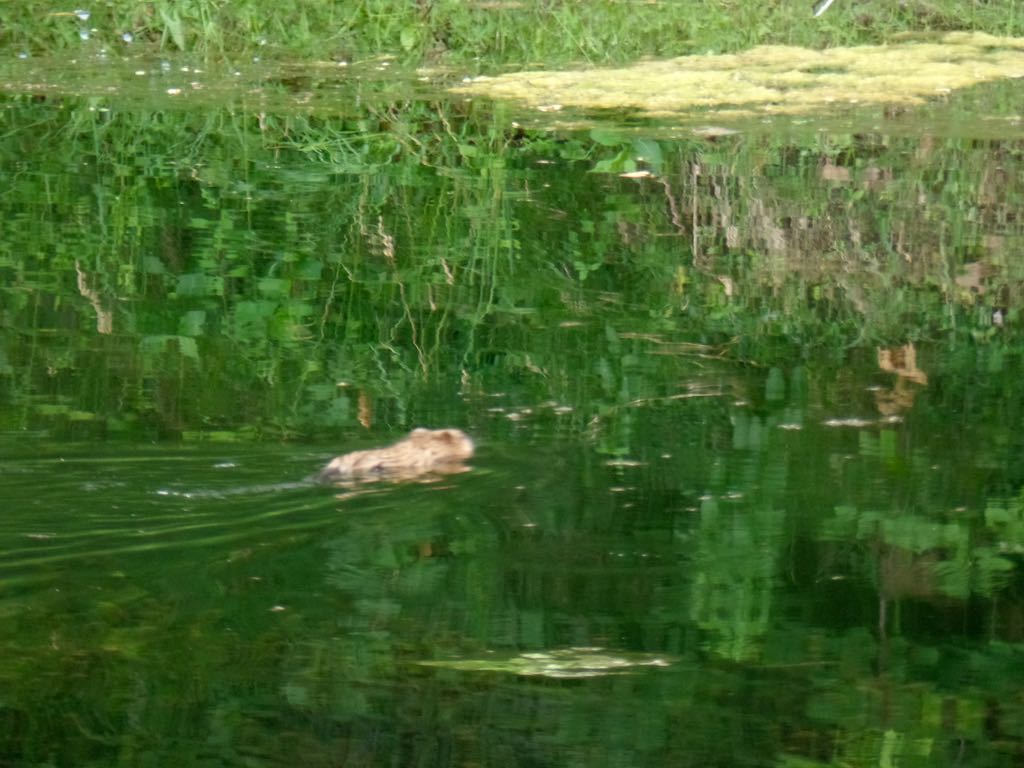 Nature! We saw a whichever this is swimming across the mill pond, where it was far enough away we couldn't be sure what the heck it was. 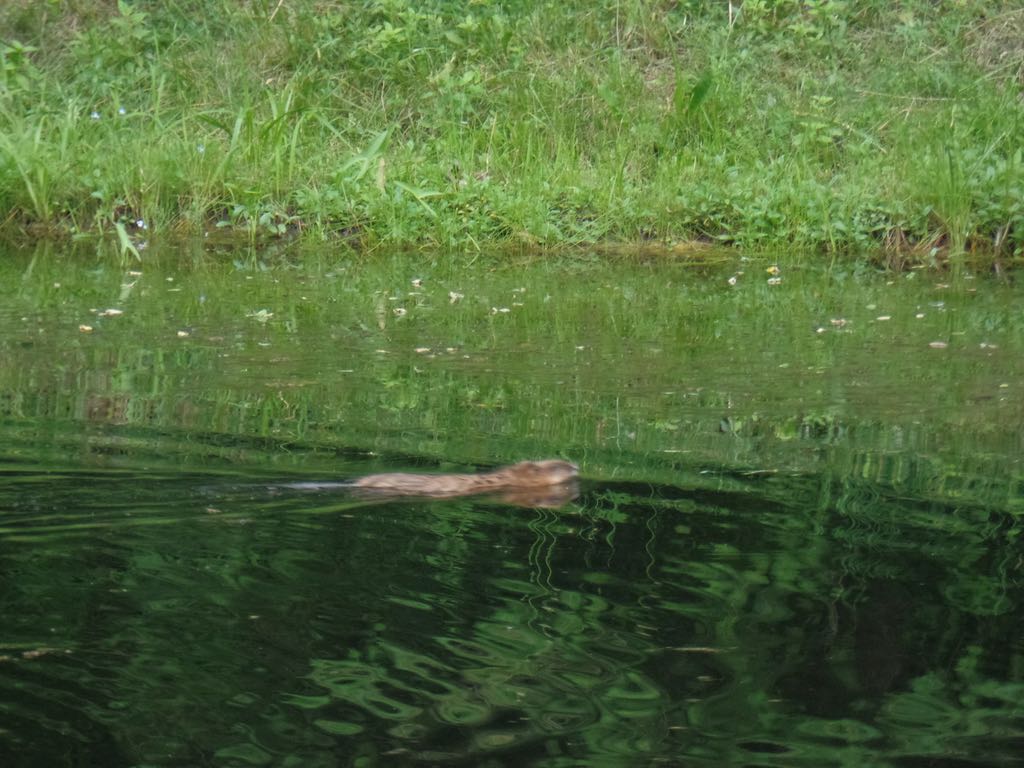 So anyway I'm guessing beaver, based on these pictures and a short movie I got before it vanished into the edge of the pond.