But we'll pick up the pieces that scattered

While the alarm didn't go off at 7:30, I was awake. My brother too. I'm all but certain he had an alarm set on his iPhone. At least it started making this noise like rocks battering together. We didn't go to breakfast, a decision I thought sound at the moment since I still felt full from the previous night. My evaluation changed an hour later. I had made it through the wake and dinner the previous night without staining my good suit. On driving to the funeral home my mother noticed a little white streak on my pants. Source unknown, but rubbing it with the condensate from a small water bottle she'd taken from the hotel's breakfast removed it.

The funeral home was there for one last bit of people gathering to say goodbye. And for us as pall bearers to gather and start taking instructions, which the funeral director and assistants were good at delivering. My capacity to self-distract is boundless. By the water cooler (my uncle warned about drinking too much, since there's no bathrooms at the gravesite, and then patted my shoulder, chuckling but also offering that there was a bathroom at the church) I noticed old photographs of Island Park, and the wooden roller coaster at it. I didn't know of any amusement parks in Rhode Island. (The coaster --- named Bullet, an unusual choice --- and park were destroyed in the Hurricane of 1938, which I ought to have guessed.)

They had us stand in the entrance way for the last mourners to leave the viewing room and only accidentally block the bathroom (we let people through). Then they had us gather in the hall by the door leading directly out from the room. The funeral home attendants did the last cleaning-up of things, including ratcheting down the inclined bed of the coffin. They used a large metal socket, almost as if they were getting the lug nut off a stubborn car.

They wheeled my aunt's coffin out on a dolly to the small anteroom. There we all took a spot and lifted up the coffin, and stepped out the room and down the wood steps that suddenly seemed unnervingly slick. An illusion, surely, caused by my not wearing dress shoes often anymore. We set her in the coffin without incident and each of us went to our cars with instructions to, at the church, come right up to the hearse.

My brother and I rode together; my parents took their own car. We also ended up somewhat far back in the funeral procession. At the church the procession ended up in this long thread snaking around the parking lot, while one woman went slowly through each car giving some instruction. My brother asked if there were any reason we shouldn't just, you know, park. I couldn't think of any, so we did. After the service started I realized the reason: the procession would pick up again, leaving from the church and going to the graveyard. I didn't mention to my brother so don't know if he had the same realization. We did have to fumble our way back into the line of cars, which had (mostly) been left just snaking through the parking lot through the service.

At the hearse we gathered again to slide the casket out. It rests on rollers, so this is not as challenging as you might imagine. Then up the stone steps of the church, which again brought out my worries about the slickness of my shoes. We set the coffin on another dolly and stepped back for the sprinkling of the casket with holy water and the placing of the white shroud over her casket.

Friends sensitive to such things may have noticed that I'm that kind of apostate who grew up Roman Catholic. My aunt, my godmother, was still actively so and thus that's the mass which was read. I haven't gone to mass regularly in decades, and even intermittent masses have been rare things. But all that childhood training pays off: almost as soon as the priest began reciting the pieces common to ordinary masses it all came back to me. I could feel confident that I was respecting my godmother's memory, snappily answering offers like ``The Lord be with you'' with ``And also with you'' and the discovery that apparently they changed this to ``And with you in spirit''? This was unsettling.

There was a small missal at each pew, offering the prompts and responses and general order of mass. I kept not reading it, though, out of a sense that I should pay attention to what was happening rather than read about what was happening. I think that I carried through acceptably. Granted, it's hard to notice if someone isn't saying the right thing in this setting. The only real slip made where someone would notice was at the Eucharist, where I forgot to cross myself after taking the communion wafer and wine. And was in the first row so that I didn't have the prompt to this thing I'd forgotten; I could just watch (nearly) everyone else do it instead.

That's getting a little anthropological. Let me think more about the personal. I'd expected to tear up through the funeral and these moments came. At the singing of Amazing Grace, for example. At the singing of Ave Maria, and again at the recessional. Also at the eulogies, particularly talking about my aunt's commitment to what the priest described as the true Christianity, that determination to be kind and supportive and giving, which my aunt was. The singing of the Prayer of Saint Francis may be traditional. It also felt true to who she tried to be (and, honestly, to what I try to be). And was again hard to stay composed through.

The second eulogy, that by my aunt's son, had an odd personal surprise. He was talking about my aunt's desire to be interested in everyone she knew, and brought up me as an example. I'd given her a copy of one of the textbooks I wrote. He explained how she sat down and read every page of this book meant for upper-level or early-grad-school mathematics and physics majors, despite the main text getting pretty impenetrable, but just because she wanted to be a person who'd read my whole book. I had known she wanted to do it. One thing I didn't know --- and learned at the lunch afterwards --- was she handed the book to her brother-in-law, who did have a bachelor's in mathematics, to ask if it made sense. He thought it did. (This is all the feedback I've ever gotten on it.)

The funeral director's assistants wheeled her coffin back to the church's entrance. We pall bearers lifted it up and brought it back to the hearse. And then the funeral procession resumed, going through the twisty paths to a grave site that more than one person commented they didn't even know was there. My uncle said that when they were planning this, even the Catholic priest said, you know, there's no problem burying you in the Episcopalian graveyard. She wanted a Catholic one and that was that. As we were driving we passed the crushed remnants of one of the small, magnetically-attached flagpoles from some other car. My brother mentioned how he wouldn't really know if ours had fallen off, after all.

And the gravesite service was the last time we were tasked with lifting my aunt's coffin, and moving it places. The priest said a few words on this sunny, nearly cloudless Rhode Island day. And the funeral director reminded all that they were welcome to a luncheon in her honor, at another of her favorite restaurants. The moment broken, we all took our last looks and hugged whoever it felt right to, and got back to our various cars.

On the drive there my mother asked if we pall bearers had ever actually carried my aunt's coffin. Well, she had mostly seen funeral home staff wheeling the coffin along the inside of buildings. I affirmed we had, and that it was less heavy than you might imagine. Although having five other people bearing the load makes it less hard.

Trivia: As late as 1897 sailors in the British Navy were forbidden the use of knives and forks, as prejudicial to discipline. Source: Food in History, Reay Tannahill. (I ... would like to see this corroborated but don't have the energy to read an Aubrey-Maturin book right now.)

PS: Friday in Omena opened with our stopping in Suttons Bay and that Radio Shack that was inexplicably still there. Also having lunch with 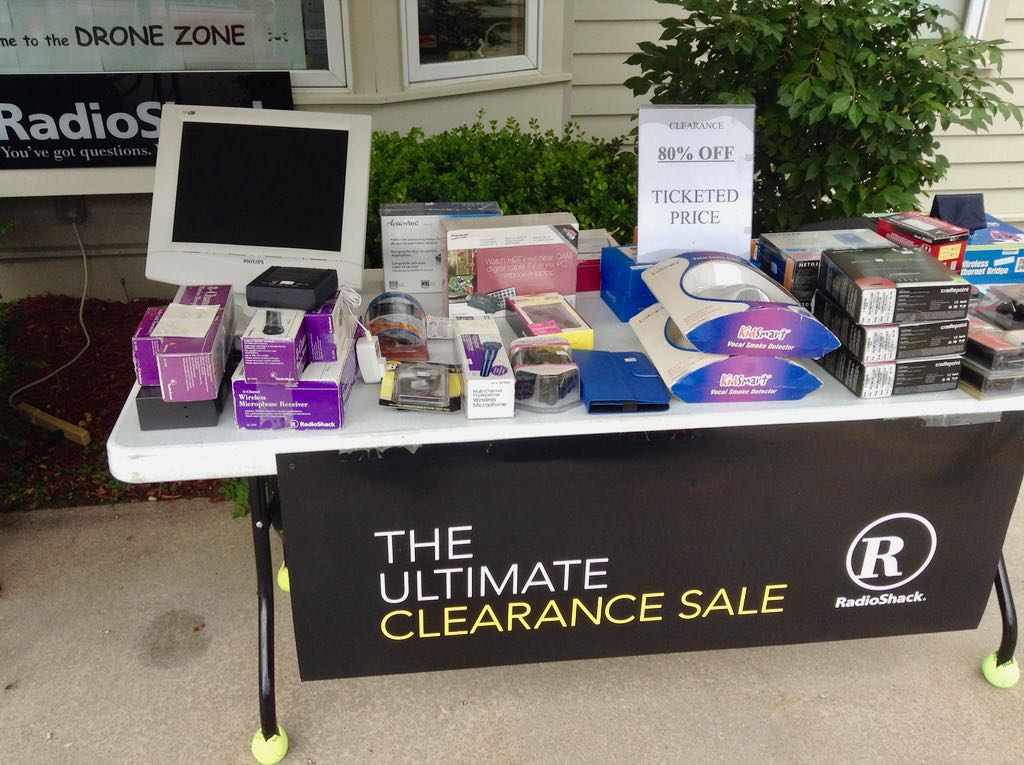 80% off is a fantastic deal on stuff you didn't really want in the first place. Note the wireless microphone up front. To the left of the picture was a rack of Assorted Cables, $2 each. Also a popcorn machine. 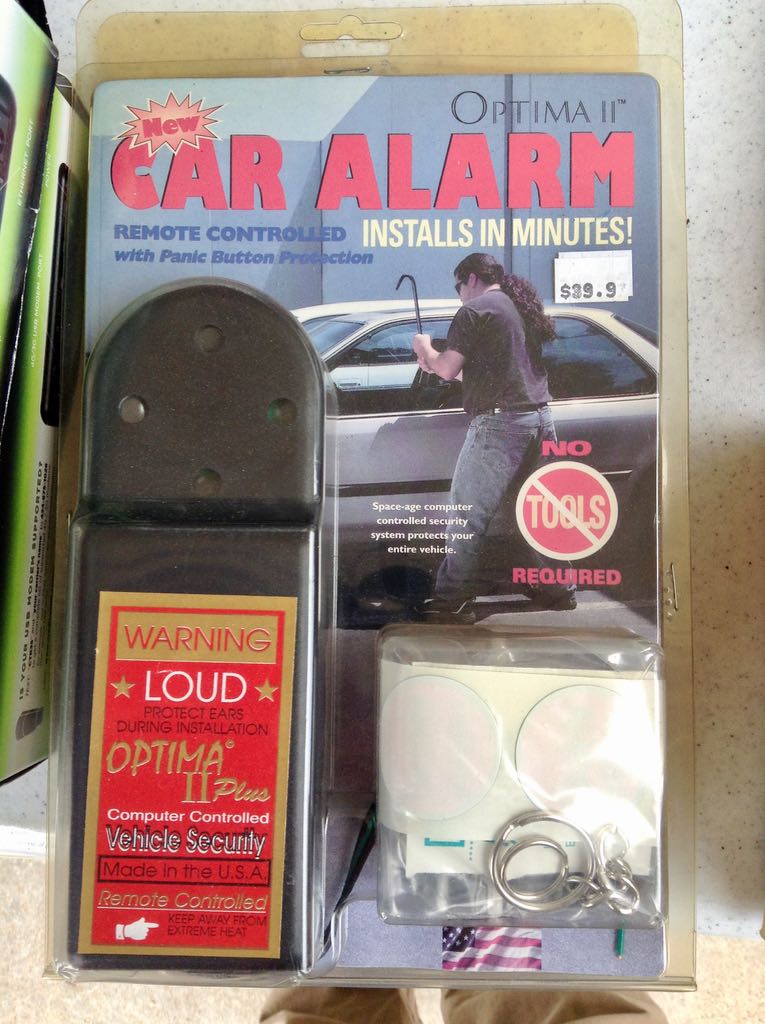 Oh man, for 80% off of forty dollars and without the use of any tools you could use a space-age computer control to make your car annoy the entire neighborhood and run your battery down to zero when a branch of the tree you're parked next to brushes the rear passenger door! 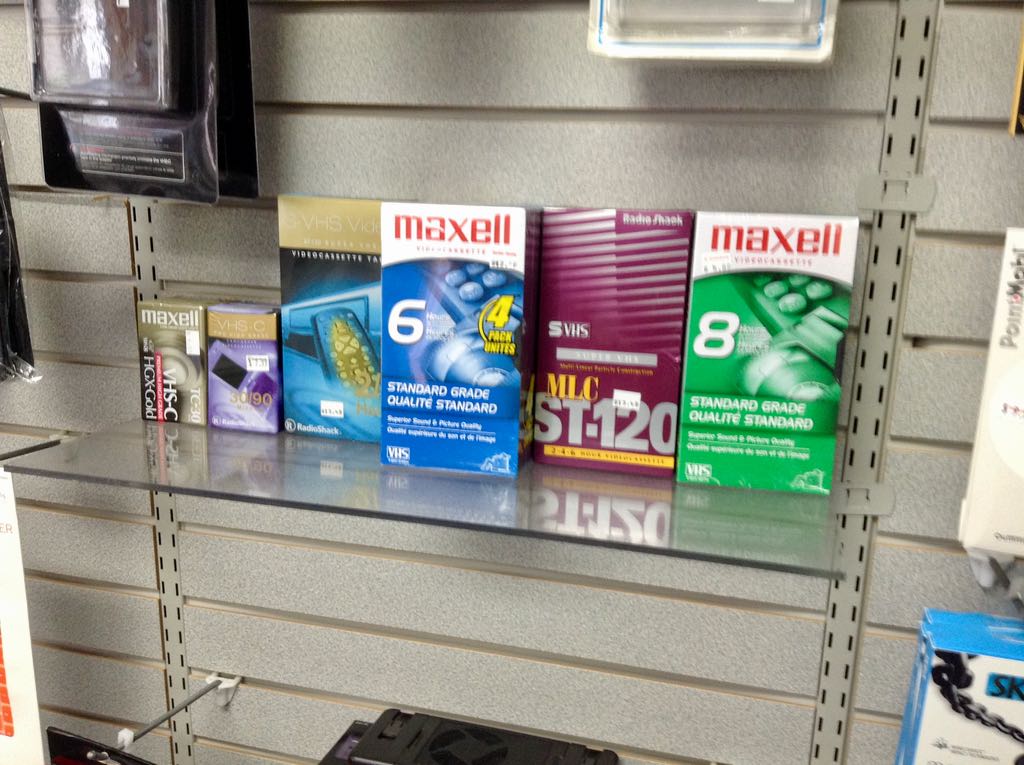 Guys! I found just the thing to record all those Mystery Science Theater 3000 episodes on in SLP!