And with emotional glue

The luncheon was set for 1 pm and in a town a fair drive over. My mother, driving efficiently to the place, got there early enough the staff was apologetic, saying, they had thought the event wasn't to start for another half-hour. My mother asked if she could just use the bathroom, and that got us in to the restaurant while they opened up the patio area reserved for the event. It had a lovely view of the harbor, and the suspension bridge, as well as the part of the lawn where a groundhog eventually came out to do groundhog chores. Across the inlet were expensive houses with private docks and, I would have sworn, one boat that looked like a big swan boat as at an amusement park. Probably it was just the walkway behind it merging with the boat's shape to suggest a neck and head, but, who can say? My aunt loved the restaurant, but never ate outdoors, where it wasn't air-conditioned.

The menu was meant to reflect some of my aunt's favorite meals there, which included a lobster roll. Another choice was a crab cake sandwich. The appetizers offered a choice of clam chowder or Caesar's salad. My parents were quick to assure me they could probably work out a vegetarian version of something, anything. I swore that I was fine; I try to eat vegetarian, but that's all, just trying. More serious is my brother, who's allergic to every kind of fish or sea product known to humanity. (Caesar's salad, made correctly, such as by a fine restaurant overlooking the bays of Rhode Island, includes anchovy.) Also they did have a steak-on-a-salad option. My brother got through lunch without needing his epipen.

We had lunch with my uncle's brother (where I learned his opinion of my textbook) and his daughter, plus a couple of other people whose connection I could remember for the length of the explanation. A couple times over the lunch my uncle, and my cousin, came over to talk with us; they were circulating among the tables and we didn't demand too much time from them.

We stayed through the end of the luncheon, and then got organized to go home. That is, back to my brother's place in Baltimore. The promise to my nieces that we would be back in two days was a simplification or a useful parental lie; we'd be getting back in after one day, but after their regular bedtime. So we had checked out of the hotel before setting out to the funeral home and, obviously, long before the luncheon finished.

We were not going to drive the six-plus hours from Rhode Island to Maryland in funeral-appropriate wear, though. My mother's plan: change into something comfortable for long car rides. Where? ... Well, the bathroom of the restaurant. I felt a bit weird doing this, since my comfortable-wear of cargo shorts seemed about four levels of clothing too casual even to just walk through the place. Could be worse. My brother's change of clothes was inside a duffel bag marked Property of Starfleet Academy, and I brought that in to him.

Our two cars started out driving back in loose tandem, as my father had the idea that one of us should call the other if we stopped for anything, like gas or food or whatnot. We stopped first, for fuel. (My brother drives a Prius and so is beyond such mortal needs.) And called to synchronize our stopping together at this Connecticut-area rest stop, after which we realized we didn't know why we were doing this.

Well, my brother and our father stopped in New Jersey at a White Castle, to try out the Impossible Burger sliders; they reported the burgers were really good, although hard to compare to a normal slider since they made them with jalapeno cheese and that's a different taste. My mother and I did't stop for White Castle (my mother never would), but we did stop at a rest area on the New Jersey Turnpike just far enough south that I could snag the year's brochures for Casino Pier and Wildwood and Story Book Land and a bunch of my and

As we were going into the rest area, some guy raced ahead of us and cut us off on the road turnoff. He kept going and came to a stop at the gas pumps, which left us baffled. We would be sympathetic to a desperate race to the rest area before one's bladder exploded, but, to hit up a Sunoco? Afterwards his car was parked, facing the wrong way, along the curb in front of the sidewalk entrance to the rest area instead of in the ample parking lot. Guy might have just been a jerk.

Still, it was --- past the Great Connecticut Traffic Jam --- a normal enough drive that went as quickly as reasonably could. We got back to my brother's house shortly before midnight and went in quiet as possible. I changed out of my cargo shorts to the maroon sweatpants I've been wearing to bed when it's cold lately. (Baltimore was hot, but my brother's family air conditioned the place to where penguins were rooting around the rec room.) I apologized to my sister-in-law that I couldn't stay up later, but I did ask her to look at my outfit --- maroon sweatpants and a purple t-shirt --- and admire my look of Starfleet Casual. She did.

And I nestled in in my guest room, the basement, to catch up online with

bunny_hugger --- in the whirlwind of activity before the first day of classes --- and get some sleep before my big day with my nieces. 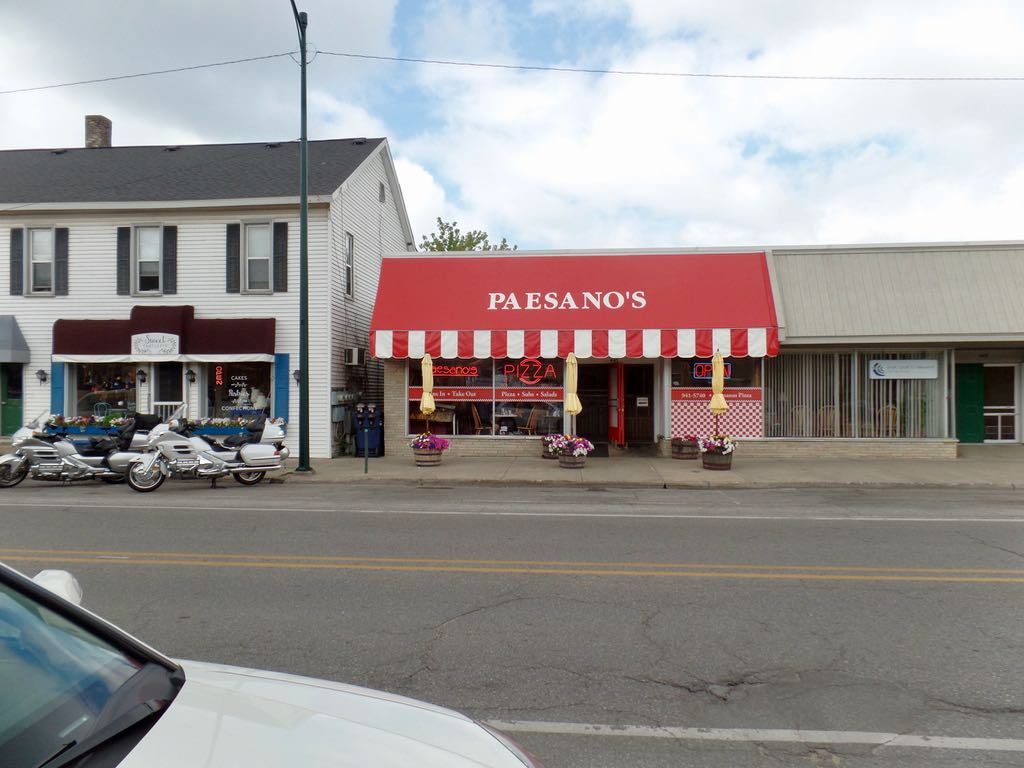 And here, in this unsuspecting corner of Traverse City, did we find ... what might well be the only Comet (Williams pinball, 1986) on location anywhere in the freaking world. 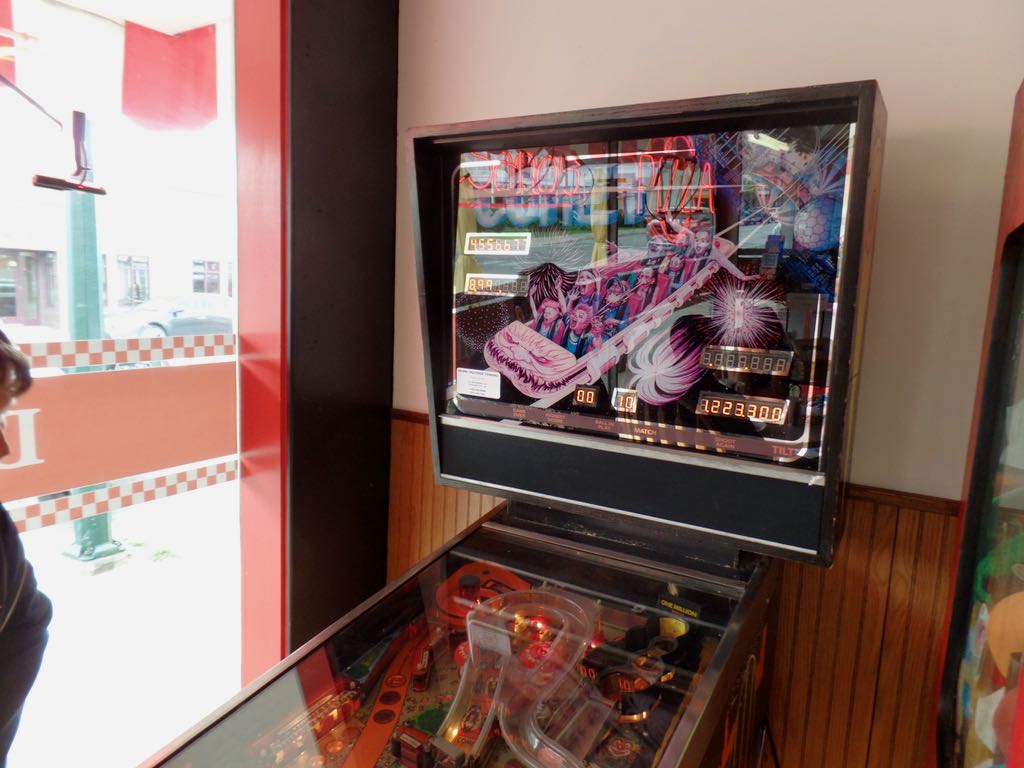 bunny_hugger looking on with amazement at actually finding the table. For some reason this game, once omnipresent, is just impossible to find; it's not even at, like, the VFW Ann Arbor Pinball Hall of Fame, nor the Sparks Pinball Museum, nor ... anything, really. 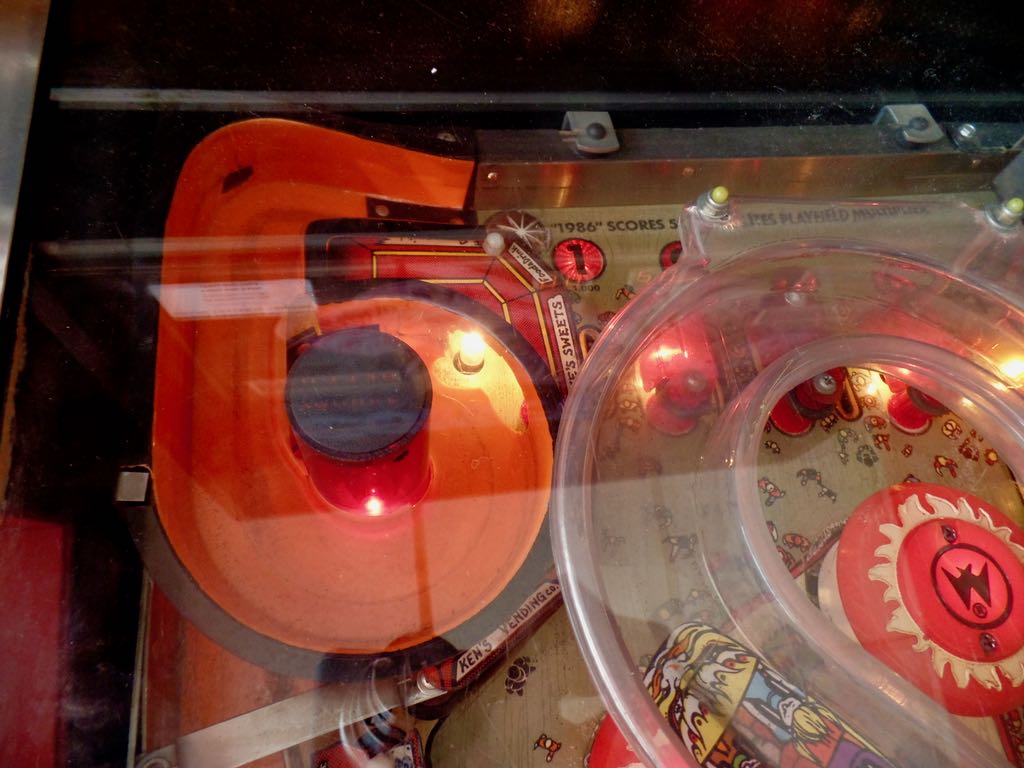 Like many games Comet has lanes, in this case four of them (unusual but not too rare; three is more common), although their lights spell out the 1-9-8-6, since the game was made in 1985. (Allegedly Python Anghelo was thinking, hey, 1986, Halley's Comet returns. Fair enough.) Completing the lanes increases the playfield multiplier, up to five times. The catch: the easiest way to get the ball to the lanes is through that spiral ramp on the upper left there. And --- you see how you can see a light bulb burning there? That's where the ramp's plastic has broken so that a ball has almost no chance of getting to the lanes up there. I managed it once in the several games we played and I don't think

bunny_hugger did it at all.