My brother and his wife adopted another Chinese orphan, their second child, maybe a year and a half ago. It turns out I'm the first of my brother's siblings to be able to visit, news I greeted with a silly, ``Yes! I win!'' And the nieces were eager to see me, the few moments we had Sunday morning before my parents and I headed out. But I figured that's just because it's always exciting to have something shake up the usual, especially when school hasn't started.

So anyway this is as close as I'll ever get to being Guest of Honor at a convention. They were thrilled I was there and I'm not sure if they were competing for my attention. But I had just walked down from another goopy shower when the elder niece (eleven years old, which is impossible, since I know when I last saw her in January 2014 she was six, maybe seven) handed me a picture, a folding-over picture of a rabbit eating vegetables I guess? It was also for Aunt

bunny_hugger. Both nieces were thrilled to learn of an actual adult who doesn't like the taste of coffee. I did confound them by admitting that I do nevertheless get a cup of coffee about once a week when I go to the farmer's market, for vegetables for our rabbit, because it's free. That this is true does not make it less daft.

So my free day ended up including a lot of playing with the nieces and, yes, worrying about the cold I would be bringing home from them. (I didn't, and I didn't pass one on to

bunny_hugger, it seems reasonable to say at a week's remove.) A lot of this was showing off toys, some of which I knew well --- they've got a lot of Legos --- and some from reputation --- Minecraft stuff --- and some because I exist at all --- My Little Pony merchandise. ``This one talks,'' my elder niece said of a really big Twilight Sparkle doll. ``What does it talk about?'' I said. ``Mostly My Little Pony.'' ``I have friends like that,'' and I'm pretty sure she thought I was joking.

``Do you want to play dragons,'' they'd ask, and it's not like they need to ask me twice. Especially as they have several dolls of Toothless. That much I was on solid ground for. Trying to follow an 11-year-old and a 6-year-old's narrative sense was beyond me. I did feel I had to point out you can't really consider it proved that the Mean Dragon is mean just because she took someone's fish; she could just be hungry.

To get some sense what I brought to the play table, besides the assertion that it takes more than being labelled to make someone the bad guy, my nieces have an old-fashioned 80s-style desktop telephone as a plaything. The elder niece pointed out how you press the little plastic posts to hang out. And I asked if she knew why that was surrounded by that plastic cradle. She understood that it was so the receiver didn't slip off. But I pointed out the cradle goes up high enough that if the phone tips over by accident, the hang-up posts are protected. You can't hang it up by mistake. And I went on, pointing out all the surprisingly many clever little touches of the old phone to keep people from making mistakes on it. They were intersted to know about the dial for how loud the ringing should be and figured out how to get the phone to reliably produce a little ding.

As the day wore on and they wore down, or their mother worried they were wearing me down, they watched a movie. Boss Baby, which I hadn't seen because um, yeah. The movie turned out to be less bad than I anticipated. Annoyingly it kept trying to be interesting, with the suggestion that the whole story is an imaginary tale the seven-ish protagonist dreams up to process his feelings about the demanding new baby messing up his life. The times the flights of fantasy are made explicit were the most visually interesting parts, yes, but also prompted my younger niece to ask if they were really happening. Her mother explained which parts were imaginary, and also that you watched this move a hundred times already. (In a final diversion from being interesting the movie throws in a bit near the end where Baby Alec Baldwin has to Learn the Power of Imagination, which doesn't come from anywhere or go anywhere but suggests someone threw a pile of notes on the film after they'd animated the first act.)

After dinner --- where I had to sit next to my elder niece, since I'd sat next to the younger at lunch, and realized how much I had forgotten about kid politics --- they wanted to show off what they called the funniest videogame ever. This would be Octodad, if I haven't got it wrong, a game where you play an octopus who's fooled people into thinking he's a normal human male and he's got a family and a job and all that. You have to go around doing normal human tasks like mowing the lawn even though you're very wobbly and have no fine motor control. It is, as they said, a funny idea, and there's a lot of nice physical comedy in the gameplay. I didn't get a turn, but was also pretty fine with that.

So that's how the day went. The next morning I'd had to get to the airport, so we didn't have time for a further play session. They did want me to know I should come back soon, though, which is always glad to hear.

When I got to the gate for my Baltimore to Newark flight there was ... nobody there. Nothing. Even the TV screen that normally says when the flight will be taking off showed nothing but a message to please restart the computer. We got pretty near boarding time before anything happened, which was, someone coming out of the jetway to say that hadn't anyone announced the flight was going to be late? That the pilot hoped to take off around 2:00? ... Which would be a jolly exciting time for me since the flight from Newark to Detroit was supposed to start boarding at 2:20. Baltimore-to-Newark is a surprisingly short flight --- the reverse direction Saturday had been about 35 minutes in the air --- but still.

Eventually, around the time the doors were supposed to close, someone came to announce the flight was leaving late and to start dealing with people who were missing their connections. She also arranged a backup flight for me just in case I somehow wasn't able to get off this plane and to wherever the next plane was to leave from in the maybe ten minutes between our arrival and the doors closing on the next flight. The whisker-thin margin evaporated on the ground in Newark, since for some reason we were unloaded on the tarmac and had to take a shuttle-bus to the terminal. ... The correct terminal for my next flight, but still. Other people had it worse; the last half of the short flight one of the attendants was going back and forth to a passenger whose connecting flight was to Hong Kong. I wanted to offer my experience, which was that long-haul flights like that will hold a reasonable time for a passenger with delayed arrival, but (a) my experience is a decade-plus out of date and (b) the fact the attendant wasn't able to confirm that right away indicates my experience might not be relevant anymore.

The connecting gate for my backup flight was the lone one in that part of the terminal being renovated, so there was no space to sit around while waiting for any news about what might go wrong. Nothing did go wrong with it, happy to say. And I did get the promised seat for the backup flight.

So I got home at a little after dinnertime, as

bunny_hugger was preparing for the school day the next day, and that was the end of a week I guess I had expected to have but without quite knowing when.

Trivia: A 1901 Christmas advertisement for Frederick Loeser's proclaimed it had stocked four million handkerchiefs for the holiday season, ``four for every man, woman, and child in Brooklyn''. Source: Service and Style: How the American Department Store Fashioned the Middle Class, Jan Whitaker.

More pinball in Traverse City. The same pinball, but more of it. 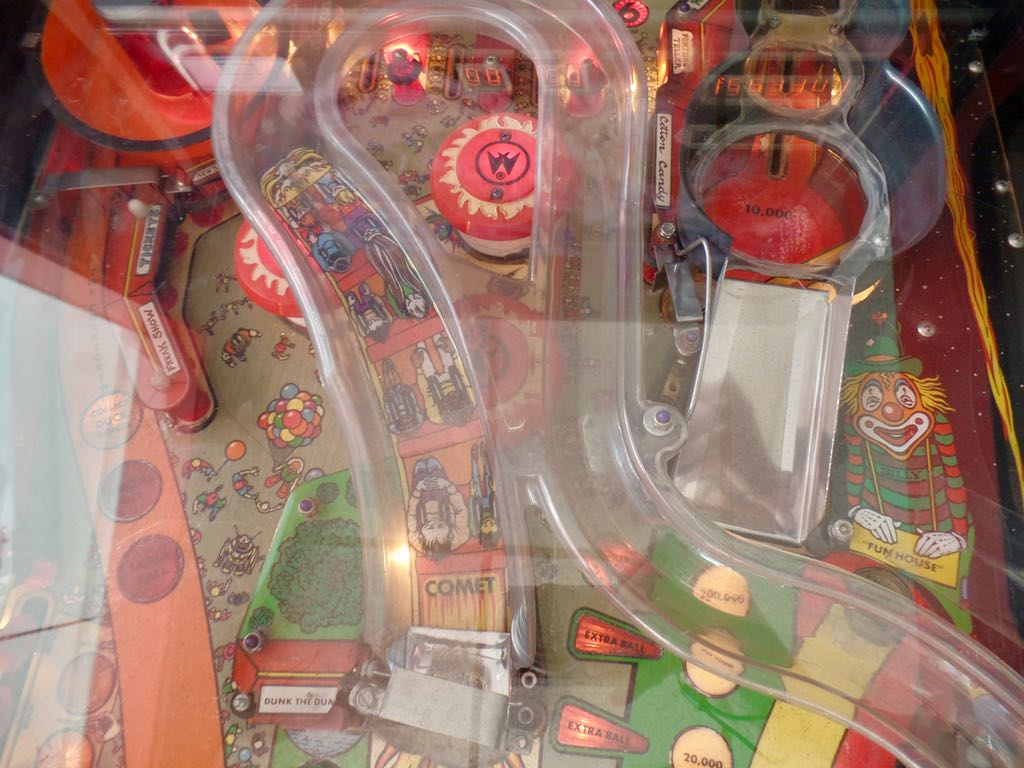 View of more of Comet's layout. The center ramp represents the Comet roller coaster of the game's title, and the game's sequels of Cyclone and Hurricane have a similar center ramp. On the right there is another ramp which plunges into something they didn't do in the sequels, three holes of decreasing size but increasing point value. When lit. 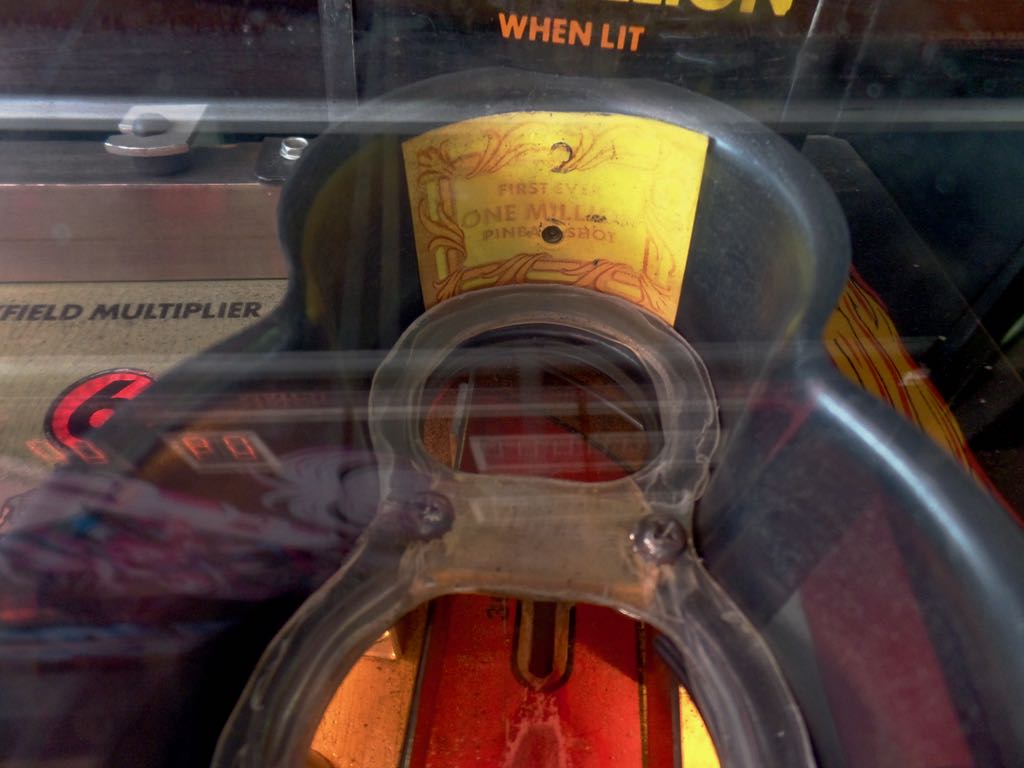 The top hole promises the ``FIRST EVER ONE MILLION PINBALL SHOT''. It's not. There were some electromechanical machines with million-point shots, although those were also games that were ``really'' three-digit scores just inflated way up. But for solid-state pinball? Yeah, strangely enough. This shot was ``really'' worth 200,000, but you could get the playfield multiplier up to 5x so that it'd then be worth a million points, as promised. Given the helix ramp's brokenness we couldn't get the play field multiplier going and so never had a chance at the million point shot. 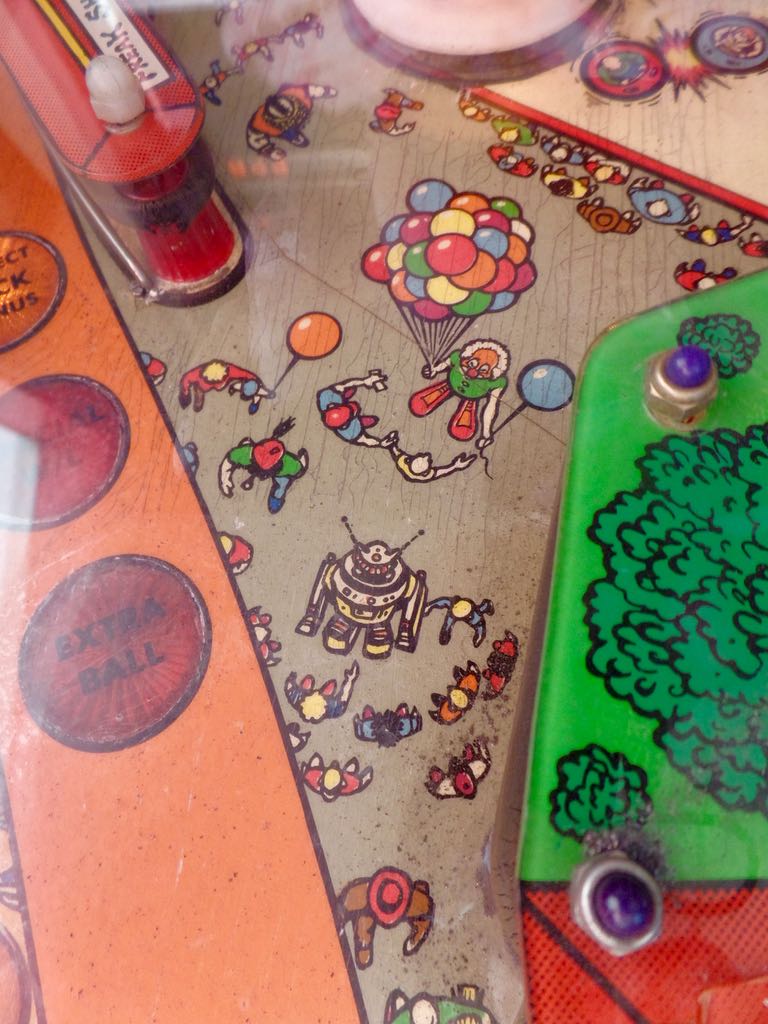 Renowned crazy person Python Anghelo did the art for Comet and he filled the playfield with a remarkably consistent bird's-eye view of an amusement park. Here's a shot of some of the crowd art including what's thought to be the first appearance of Pin-Bot on a game.