And on to my humor blog, and its past week of works. Here's what you missed.

This won't wrap up our Traverse City visit, but it will finish off the looks at Comet. 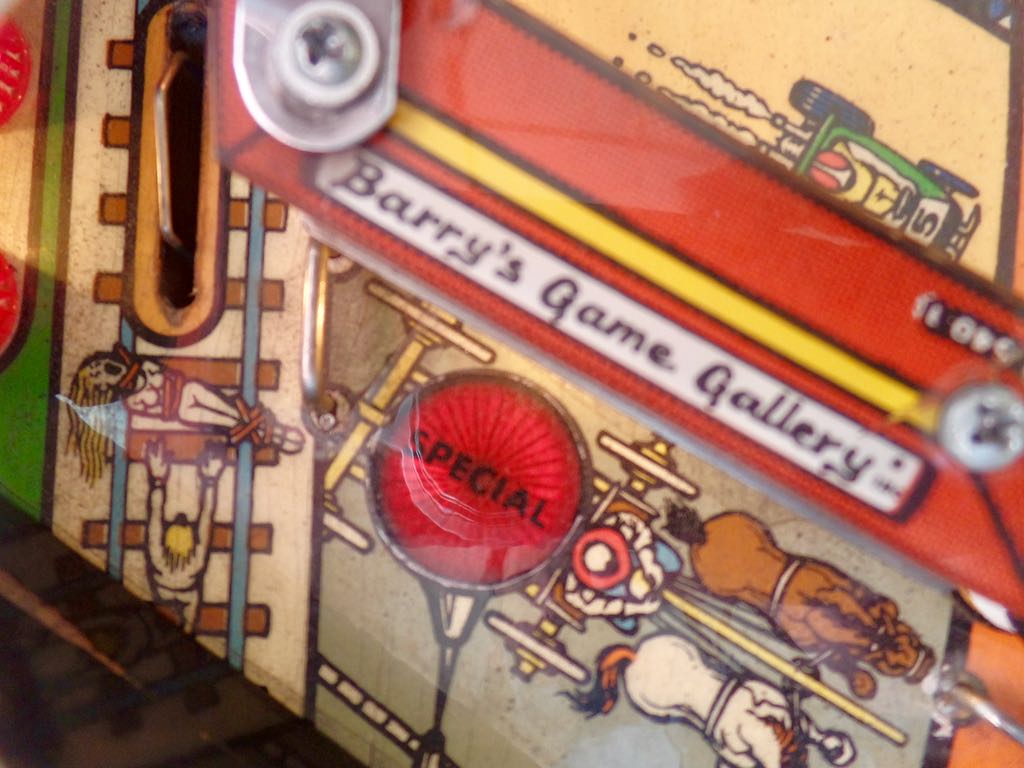 ``But it's not sexist,'' cries the pinball guy we're rolling eyes at, ``Isn't the guy probably as naked as the girl strapped to the railroad tracks? I mean unless his shirt color's just faded in the light.'' (It's possible the woman's clothes have faded too. Still, hey look kids, breasts!) 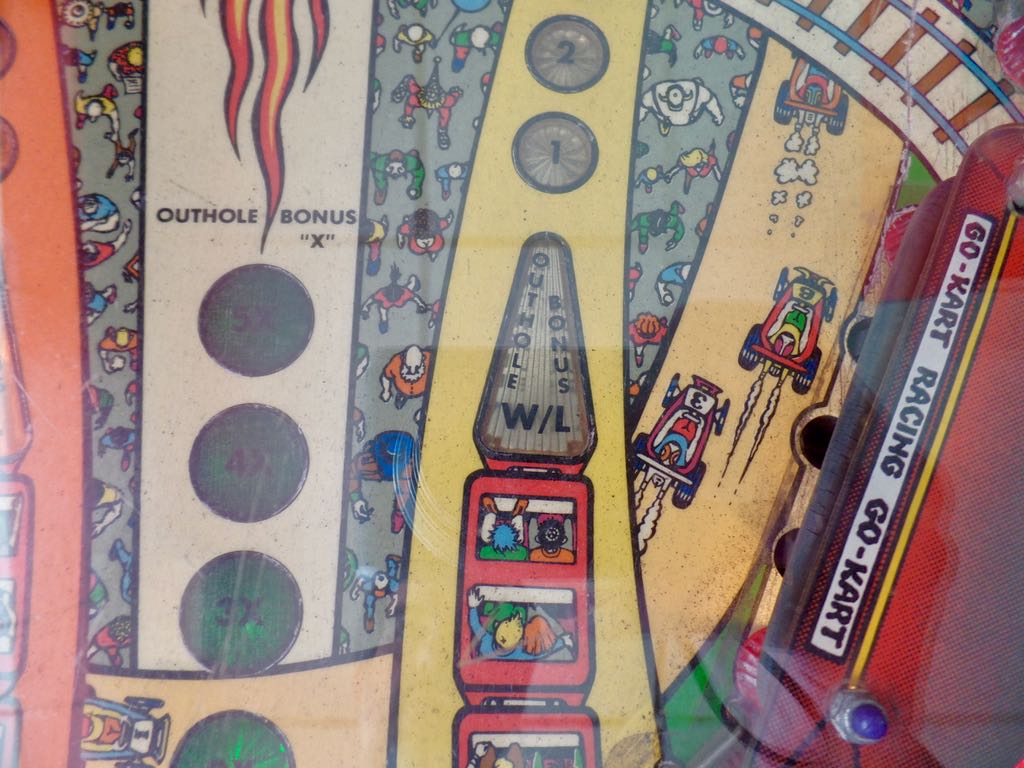 More of the playfield chaos and mayhem on Comet. I'm not sure the guy in the front car there doesn't have bunny ears; the perspective and the art fade makes it a bit hard to tell. 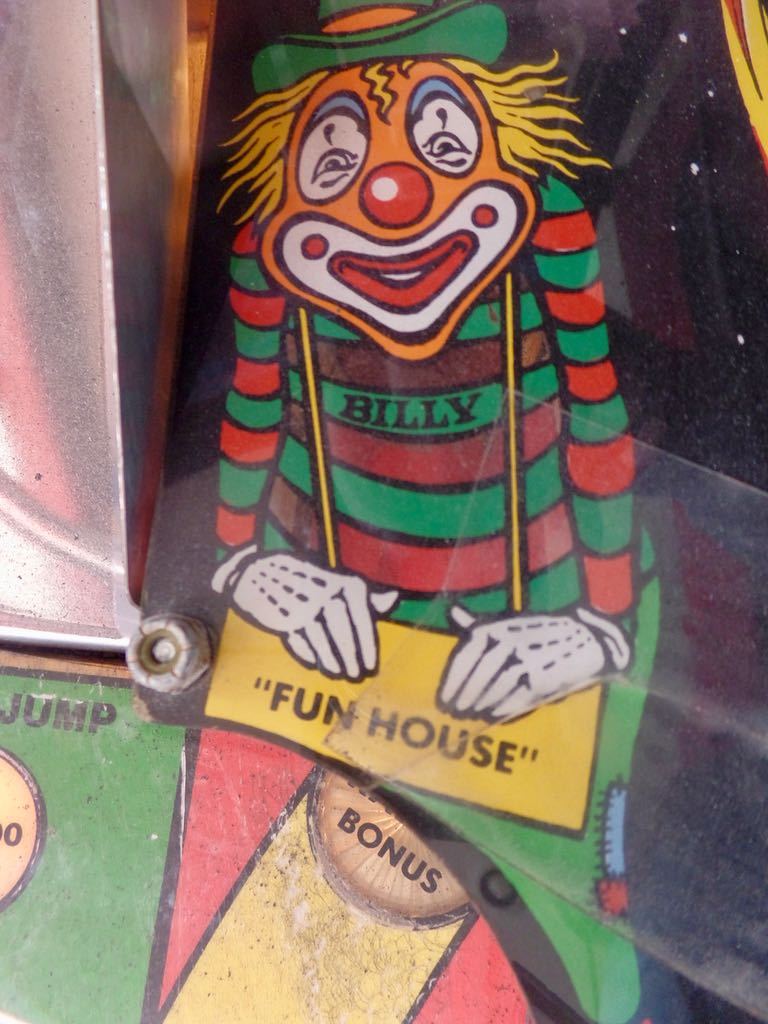 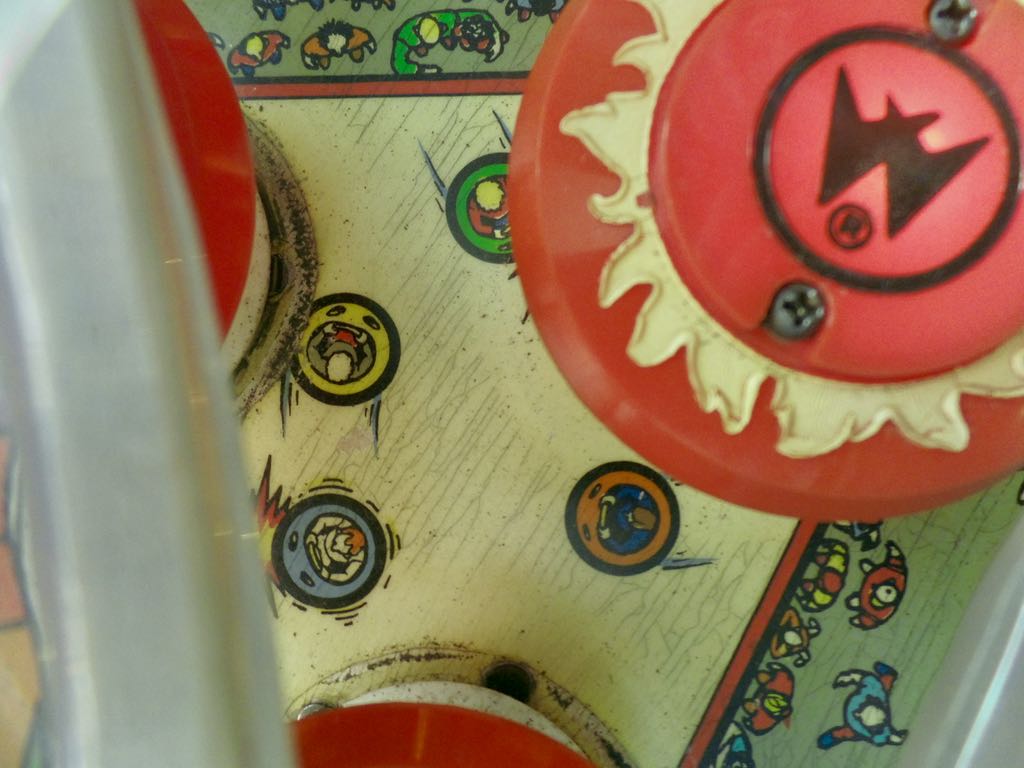 Bumper car ride, set between the jet bumpers. Really nice whimsy and it did make me wonder why bumper car tracks are always rectangles (or ovals); why not stranger shapes? 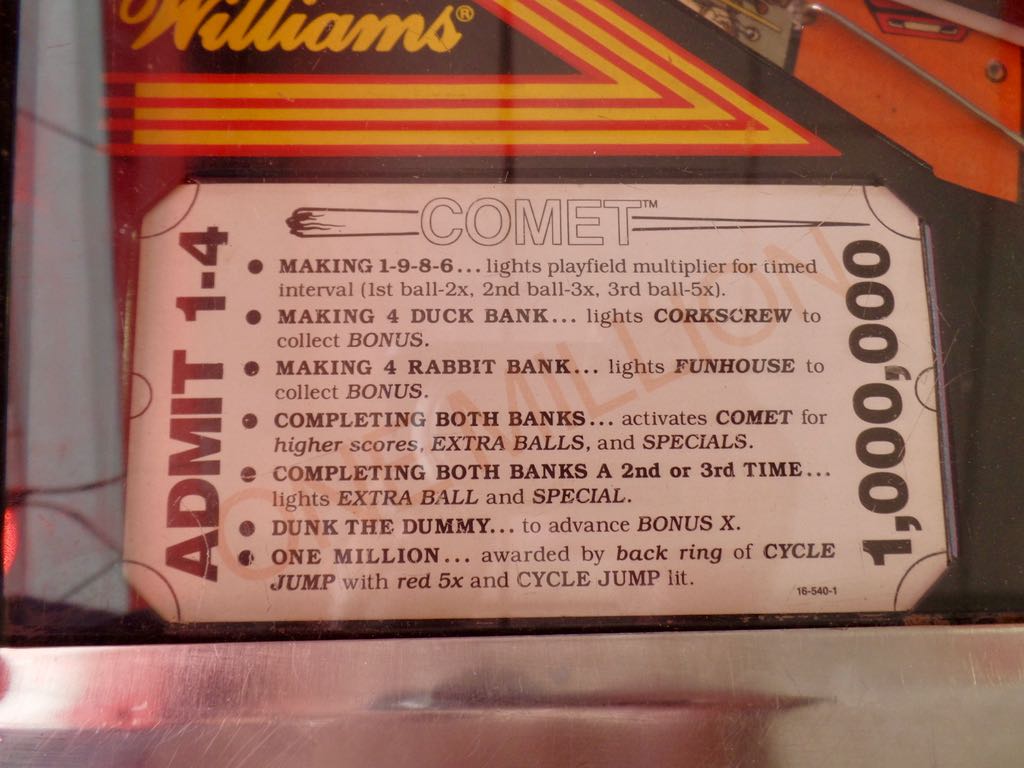 Rules card for Comet. It's telegraphic-terse but it does explain how to do all the high-value stuff in the game. 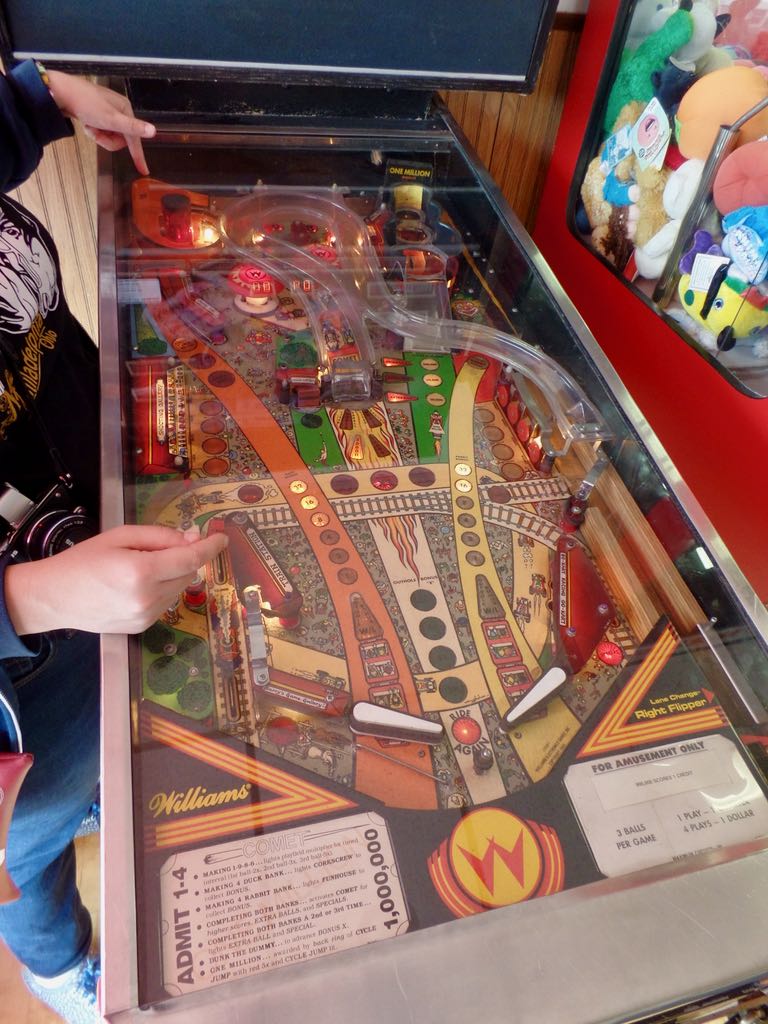 bunny_hugger pointing out stuff in this nice view of the whole playfield. Also note the price card: 1 play - 1 Quarter. 4 Plays - 1 Dollar. Good to have that sorted out. 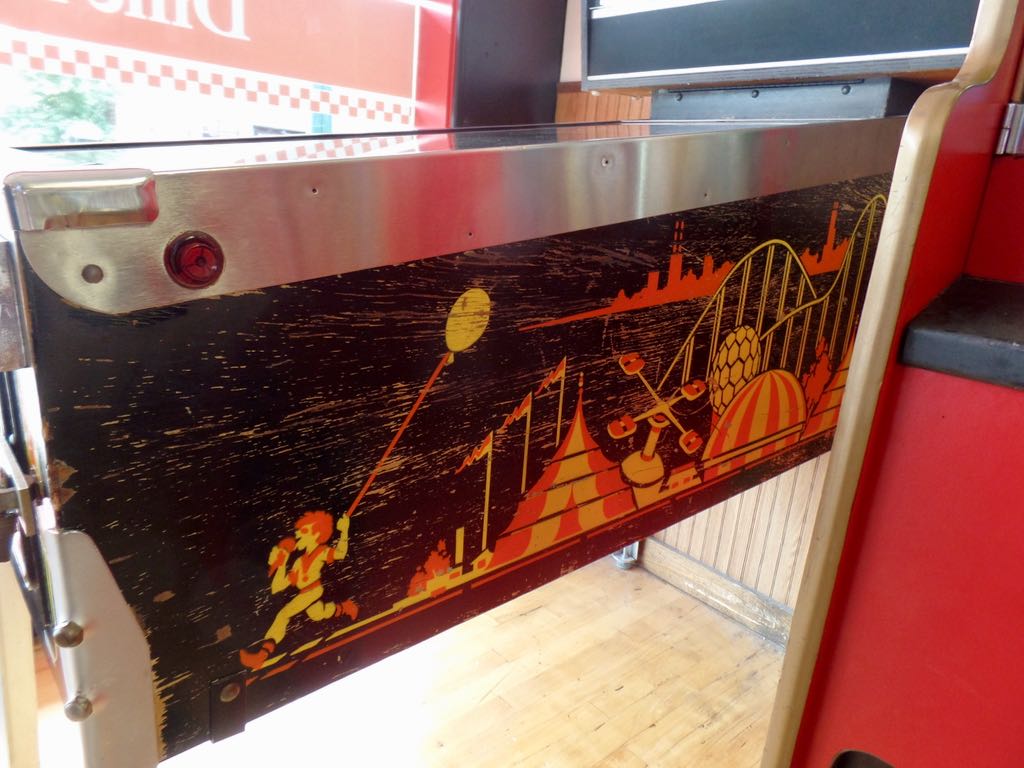 The faded and somewhat battered right side of the pinball. It's far less badly faded than the left side, which faces the outside window. You don't see stencil art like this anymore. 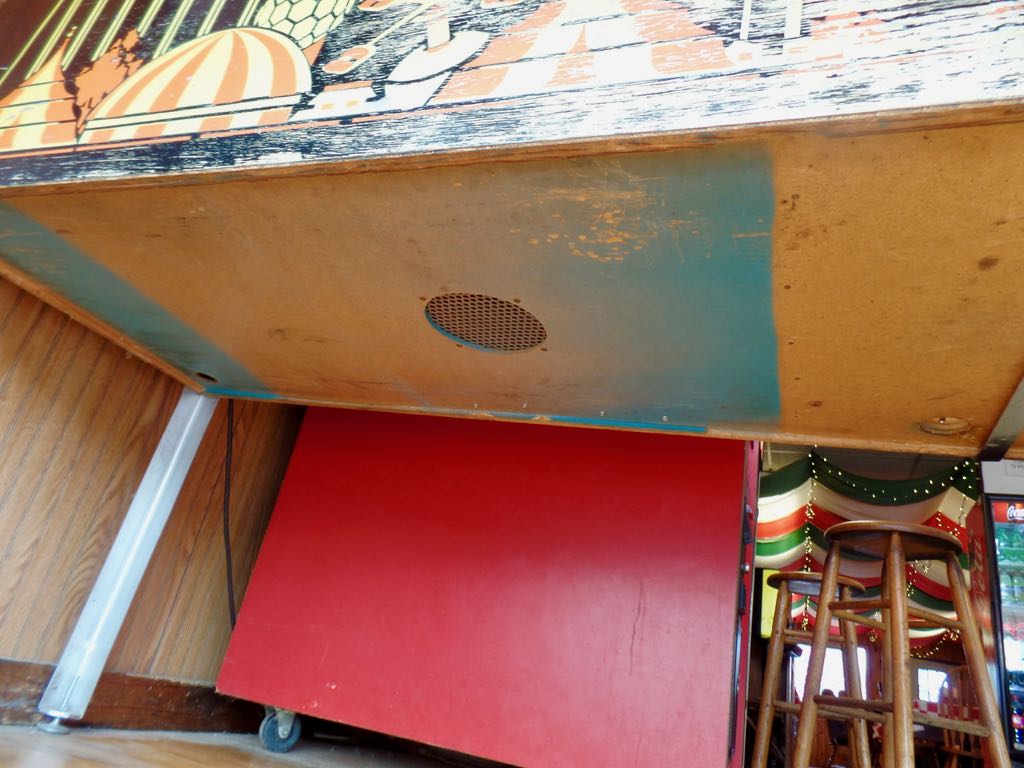 Underside of the Comet, which shows off the left-hand side's fade and battered nature. I don't know why the halfhearted blue paint. But you see the main speaker and, in the far right corner, the power switch for the game. 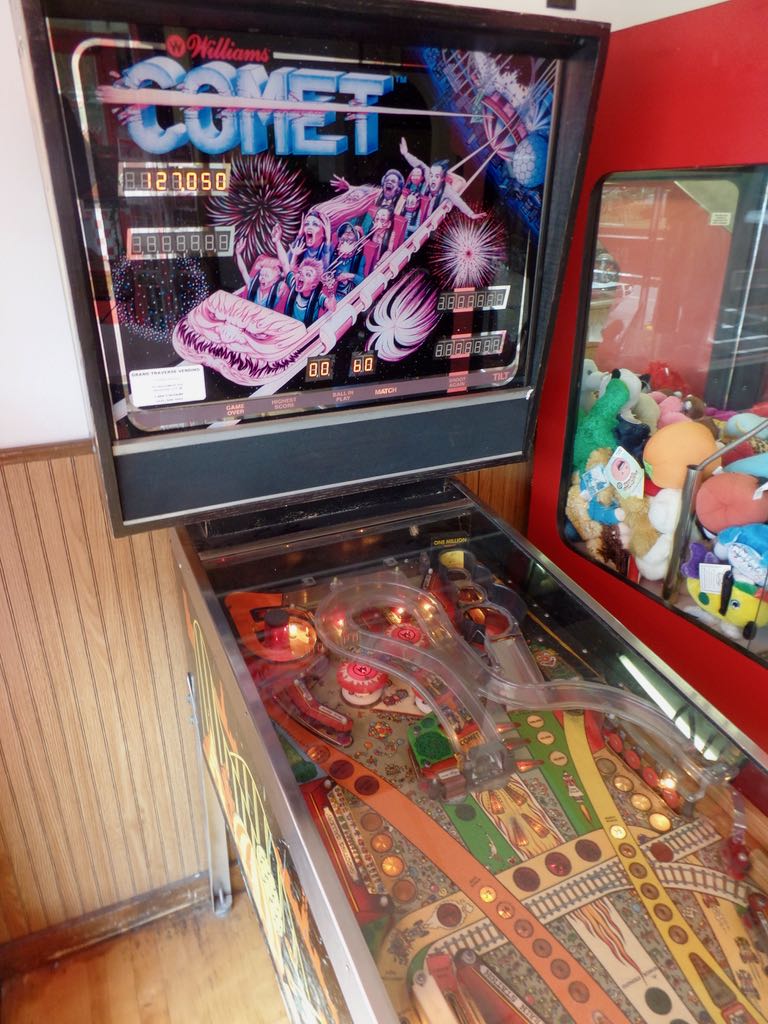 And one last look at the playfield and the backglass. Note the crazy severe angle of the ground in the background; the roller coaster's going in a crazy direction. Do not look too closely at the black girl in the next-to-the-last row; the best we can say is, well, they surely meant well.

Trivia: In the fiscal year ending the 30th of June, 1942, the Works Progress Administration employed 1,034,629 workers in the United States (including Puerto Rico), the lowest number since its start. Source: American-Made: The Enduring Legacy of the WPA: When FDR Put The Nation To Work, Nick Taylor.

I'm Still Looking For Fun Mathematics And Words, gathering attention for my two big mathematics-blog projects for the month.