Thursday. First day of Pinburgh. We meet up with MWS who's actually figured how to get from our hotel (the Doubletree) to the David L Lawrence Convention Center. Yes, these are Anthrocon locations. There wasn't obvious evidence of the furries around, just a few weeks after, but I kept looking. It's a different hotel from what we'd stayed at before, and the Pittsburgh streets around there are a maze we haven't figured out yet, which is one reason

bunny_hugger and I don't pop back to our room for a break. By Saturday I feel like I know the area well enough to navigate back, at least.

First order of business: the Michigan Pinball Group Photo. We're better at getting out information regarding the time and location for people to be, and we still don't manage to get everyone together. Also hanging out there, while not competing in Pinburgh: GRV. We knew he'd be there because he just manifests any time an event this big happens. Could hear his laugh from far away. I'll see him a couple times through the event, often giving rules advice. He knows every rule to every pinball game ever, somehow, and has reached that level of pinball expertise that no table is ever in remotely playable condition.

Second order of business: working out this rumor that there's more space for ReplayFX/Pinburgh this year. It takes a while to be sure but, yes, there's more floor space. The convention and tournament have what sure looks like this whole wing of the convention center, compared to last year when the last block was partitioned off. Good for convention growth. Good for providing a little more space between competitor and non-competitor areas and reducing the chance for casual people to accidentally mess up tournament games. Bad for the area's Wi-Fi; the new section seems to be one that the public Wi-Fi doesn't reach.

bunny_hugger and I, having been frustrated with the public Wi-Fi before, have our own Mi-Fi device. But only one of us can hold it at a time, so if we're playing too far apart, as we often are, one of us has to just hold our thoughts.

Third order of business: the greetings! And welcome to Pinburgh! And directions! I assume. I can't make out anything anyone on-stage says, but it all looks pretty positive. There's 840 people playing this year, a modest increase from last year, and we're ready to go. The first day is five rounds of four games each. Each round, roughly, is one modern-era game (roughly, 1991 to the present day), one late-solid-state game (roughly, 1985 to 1991), one early-solid-state game (about 1977 to 1985), and one electromechanical (about 1960 to 1977; older games are still electromechanical, just rarer and maybe not at the tournament).

While this is run by the Professional and Amateur Pinball Association, they don't use what's called PAPA-style scoring, where the first place finisher gets four points. Instead, you get a linear score based on how many people you beat. In a normal, four-person group, the person coming in first place on a game gets three points; they beat three people. Second place gets two points, third place one, and fourth place gets to claim they're sandbagging their way into the novice division. In a three-person group, your raw score's counted the same way, but to make your score comparable to the four-player groups, the raw score gets multiplied by 1.5. The effect is, if you get into a three-player group, first place still gets 3 points, and last place 0 points. But second place gets 1.5 points. So some people will have fractional point totals. A two-person group is obviously impossible so there's no sense wondering what they'd do for that.

The first day is playing for division. Players get sorted into what are now five groups, from the top players in A through to the new ``novice'' E Division. I'm seeded (arbitrarily) 285th. And also restricted. Last year in the then-novice division of D, I finished in the top four (the top two, in fact). So I'm not allowed to finish in anything lower than the C Division however bad I play this first day. There's that pressure off. But it does mean that if I play lousy, I'll be seeded way at the bottom of C Division on Friday, and have that much of a harder time making playoffs. I don't expect to make playoffs, but it would be incredibly sweet to make playoffs two years in a row.

bunny_hugger is in set 47, Up Up Down Down Left Right Left Right B A Stars. They've replaced the constellation names for groups of games. Still, it's a bank with a couple of friends in it: Cirqus Voltaire, Doodle Bug, World Cup Soccer, and Stars. All but Doodle Bug she's played a lot. And Doodle Bug is everyone's favorite novelty act after last year; it's got a switch that triggers an inset ball that bounces back and forth and is just funny. It also has flippers you can't trap the ball on, something that she forgets at least once and loses a ball for. She gets 4 wins, 8 losses in the round.

Me? I'm on Set 10, The Greatest, And Also Ali. There's two or maybe three friends there. Mustang, which I know pretty well. My first friend. Triple Action, which I've at least played before. Call it my maybe-friend. TX-Sector, unknown to me. Ali, which I've seen the playfield for but never played. Also in the group with me: MWS. Yes, 839 other people at the tournament, and I'm put in with the only person besides

bunny_hugger that I play pinball with eight times a month. Also, he's better than me.

Trivia: In 1933 Hershey began making a chocolate bar called Mild and Mellow. In 1934 they added the Not-So-Sweet bar. Source: Hershey: Milton S Hershey's Extraordinary Life of Wealth, Empire, and Utopian Dreams, Michael D'Antonio. (This was part of Hershey's recovery from the depression, which it had managed by 1936.)

PPS: More rabbit, last year. Plus something else. 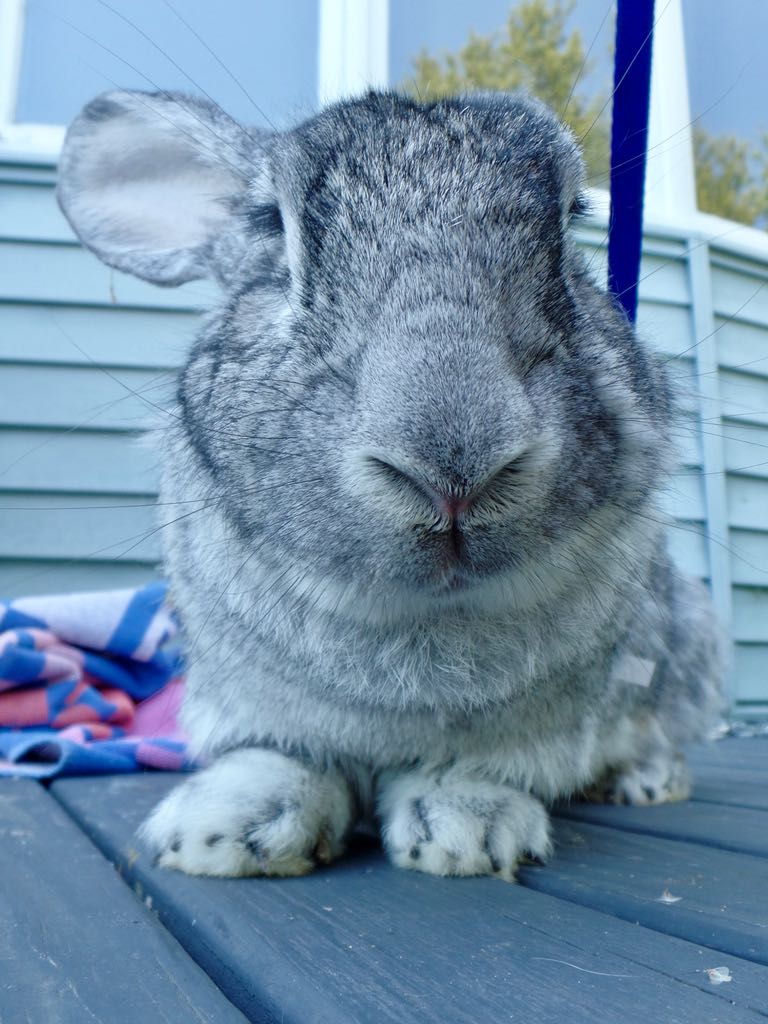 Columbo letting you know that you have his full attention, although not quite enough attention for him to be able to quite see you. 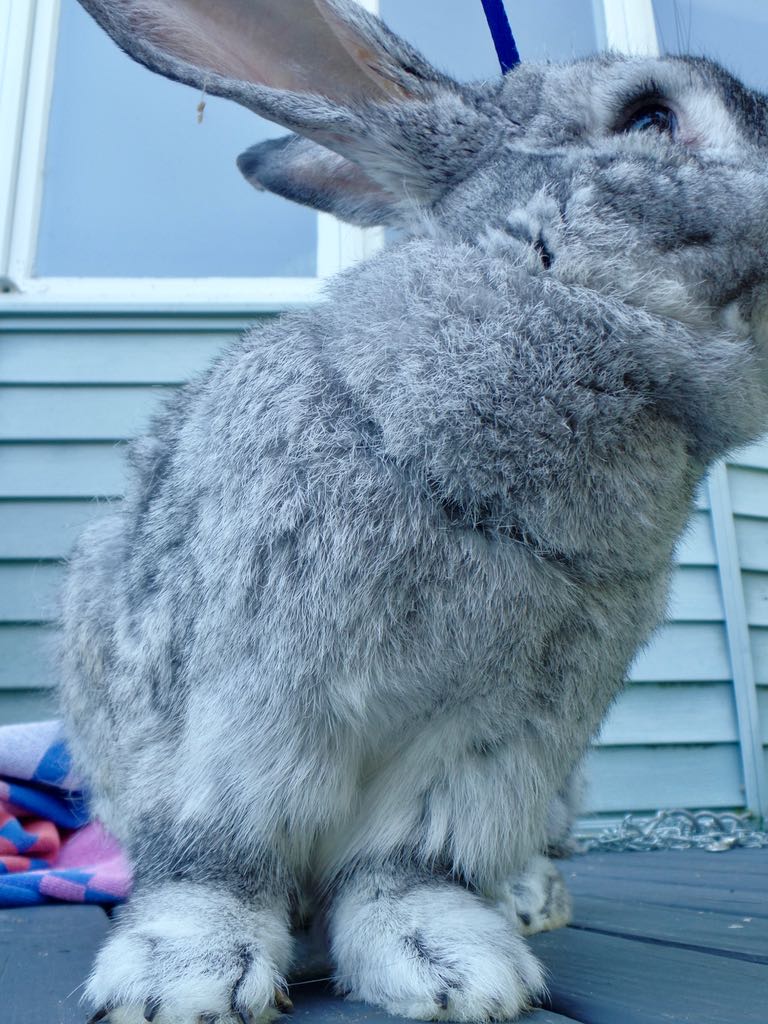 Now he's interested in you, or maybe in any other thing that's around. 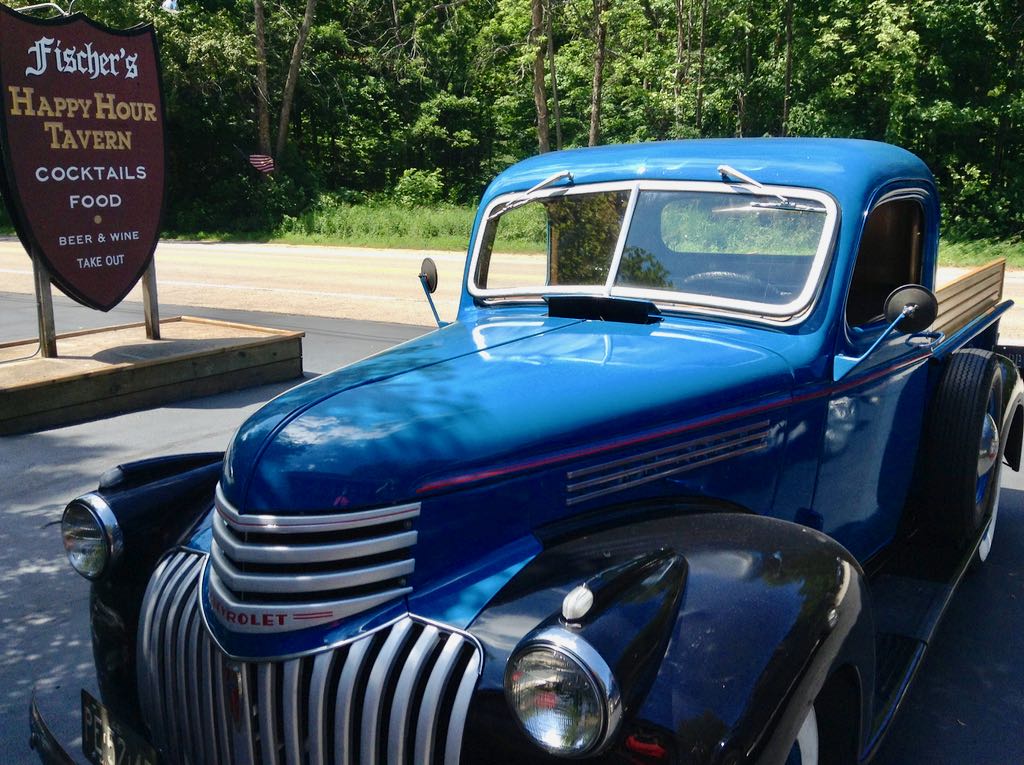 Vintage car from outside the Fischer's Happy Hour Tavern. It's got a pretty good menu and brings a tray of all the reasonably imaginable fixings to your table when you order a burger (vegetarian patty an option). It makes me wonder so what do they do with all the other onion slices that've been on someone's fixing tray but weren't used? DON'T TELL ME.