What more can I say now?

First day, first round of Pinburgh 2018. MWS and two strangers in my group. First game: Old Stern's 1980 Ali. It's the early-solid-state game. Themed to the draft resistor, hero, and boxer. Knowing nothing else of the game, I shoot for drop targets, and have a great game. MWS is slow to figure a strategy, but he finally gets one on the last ball. He comes within a hair of beating me but doesn't, and the other two are nowhere to be seen. MWS comes back on Modern Stern's Mustang. It lets you build from a three up to a six-ball multiball by completing banks of drop targets that spell out G-E-A-R-S. I go for the short game, figuring, it's Pinburgh; there is no long game. MWS goes for the long game, getting a six-ball multiball and blows over a hundred million points past my second-place score. The electromechanical is Williams's 1974 Triple Action. MWS and I have played it before, at tournaments in Flint. And I just have the groove for the movie-themed game's bonus-advance mechanism. I come just short of rolling it. The two strangers come close to my score, but fall short too. The late-solid-state game is Data East's 1988 Torpedo Alley, a naval-warfare-themed game. Between the advice on PinTips and the instruction card I have a good handle on what to do, and have a smashing game, one that nearly doubles everyone else's scores combined.

My first round and I have 11 wins, 1 loss. MWS apologizes for cheating me of my second-ever perfect round. Well, it's not like he beat me on a close game. MWS is 6-6, respectably enough. The two people we didn't know, and whom we joked suspected us of collusion went 3-9 and 4-8. I figure I've already peaked for the whole of Pinburgh. I am part of the 22-way tie for 13th place at the whole of Pinburgh, sharing a space with names like Steve Bowden and Robert Gagno, people that folks outside obsessive competitive pinball still wouldn't recognize. But seriously, like, they've been in ESPN Magazine and stuff. ... And I was just one game of Mustang away from being the thirteenth person with a perfect first round. Ah well.

bunny_hugger was on, but in a different foursome (three groups play on each set of four games) goes 6-6.

bunny_hugger is on Set 19, One Cactus Per Seashell. It includes Demolition Man, of course, a game she knows well and a movie she's never seen. Also Cactus Jack's, a danged goofy mid-90s Data East game I've turned her on to. Barracora, a body-horror-themed early solid state. Safari, featuring a tiger that I think the younglings would say looks ``thirsty''. She comes through all right, going 7-5, and raising her score to 11-13, respectably near .500.

I'm on Set 67, Aaaahhhh, Freak Out!. Its centerpiece is the electromechanical Freak Out, a custom-made reskin of Williams's 1968 Doozie. The reskinning obscures the rules for the targets and there's no instruction card, but I make do and get second place. The late-solid-state is Williams's 1990 Riverboat Gambler, which I know nothing about. But I do pretty well falling back on completing sets of targets to complete games. The third player squeaks past me, though. And the fourth player starts a multiball that just does not end, and crushes all our scores. I have a third-place finish. The early-solid-state is Old Stern's 1979 Dracula. I feel good about this one. Lots of standing targets, a couple drop targets in what look like nice easy places. I get a last-place finish. The modern game is Williams's 1994 Flintstones, also based on the movie. I know the rules well. I know the quick-dirty-point-grabs. I know where the major points are. I get none of them. My round is three wins, nine losses. I drop to 14-10, which is much closer to my true aptitude.

Round three. The last one before lunch.

bunny_hugger is on Set 11, Trash Pandas Doodling. Yes, the modern game is Stern's 2017 Grauniads of the Galaxy. The electromechanical is Williams's 1970 Dipsy Doodle, another version of slightly ironic favorite Doodle Bug. The late-solid-state is Williams's 1990 Diner, which she's gotten some time on at Chesterfield Pinball League at least. The early solid state is Williams's 1979 Flash, a sea-gods theme.

bunny_hugger doesn't do the SRH correctly and goes 3-9, dropping her to an inconsolable 14-22.

And me? I'm in Set 27, 60 Seconds On The Clock. It's not a sports-themed set. The electromechanical, where we start, is Gottleib's 1969 Target Pool. It's one of eight jillion pool-themed games. It's single-player (nearly all the electromechanicals are). I have to go first, pathfinding for everyone else. GMG takes first place. Another of the players beats me on it too. Bally's 1990 Game Show is the late-solid-state game. The theme is almost tailor-made for me. I love the game but rarely get to play it. There's two things to do in it. One is to shoot the variety of targets to collect each of the game-show prizes, then launch a two-ball multiball. The other is to shoot the center ramp a hundred kerspillion times. Everyone does a bit of this. I do a lot of it, including getting the two-ball multiball going, and put up my personal-best game --- incredibly --- on a Pinburgh machine in tournament settings. 7.8 million. GMG, though, had an even better one, finishing at 8.3 million.

The early-solid-state is Gottleib's 1979 Count-Down. The gaming theme has drifted but at least we still have the memory of clocks in it. I've played it some. I'm more familiar with the art; a backglass of it is in Grand Rapids hipster bar Stella's, across the street from where the pinball league meets. The backglass, by Gordon Morrison, features an astronaut smiling at a space-woman outside the window of his spacecraft. It's an example of

bunny_hugger's second-favorite backglass artist's ``Smiling Space People'' theme. I do very well focusing all my attention on one bank of drop targets, building them up to high value and staying there. The other players don't realize that's the game, at least not until the last ball when GMG beats my score by fifty percent.

The modern-era game is our last game. It's Williams's 1998 Monster Bash, and any theme has been wholly lost by now. I know the game well, but so does everybody. Repeat any shot to start a monster. The center shot starts a two-ball multiball; the Frankenstein shot starts a three-ball multiball. Starting all six monsters starts a four-ball multiball. After two catastrophic balls I reduce my strategy to just bashing Frankenstein and starting that multiball. I finish at 4.2 million. It's way below my average, but Pinburgh modern-era games are set tough. Someone else gets out with only 2.1 million, and the next-higher player gets 4.7 million. ... And GMG comes in at 32.6 million, for another first-place finish.

GMG, who's on his way to the A Division, and to finishing in a tie for 50th for the whole tournament, is one of nine players this round to have a perfect game.

Trivia: The expanse of the Louisiana Purchase was, for a time, officially on the French Revolutionary Calendar. Source: Marking Time: The Epic Quest to Invent the Perfect Calendar, Duncan Steel. (Steel specifically says it was on this for ``about three weeks'' and I just don't see how that could be. Three years seems more likely, as France nominally held sovereignty from late 1800 to late 1803, although I guess the administration was formally French from October 1802? Anyway, something's not adding up and I wonder if Steel didn't get his notes mixed up with the Paris Commune's use of the French Revolutionary Calendar, which did last for about three weeks.)

PS: more of what we visited Saturday near Omena. 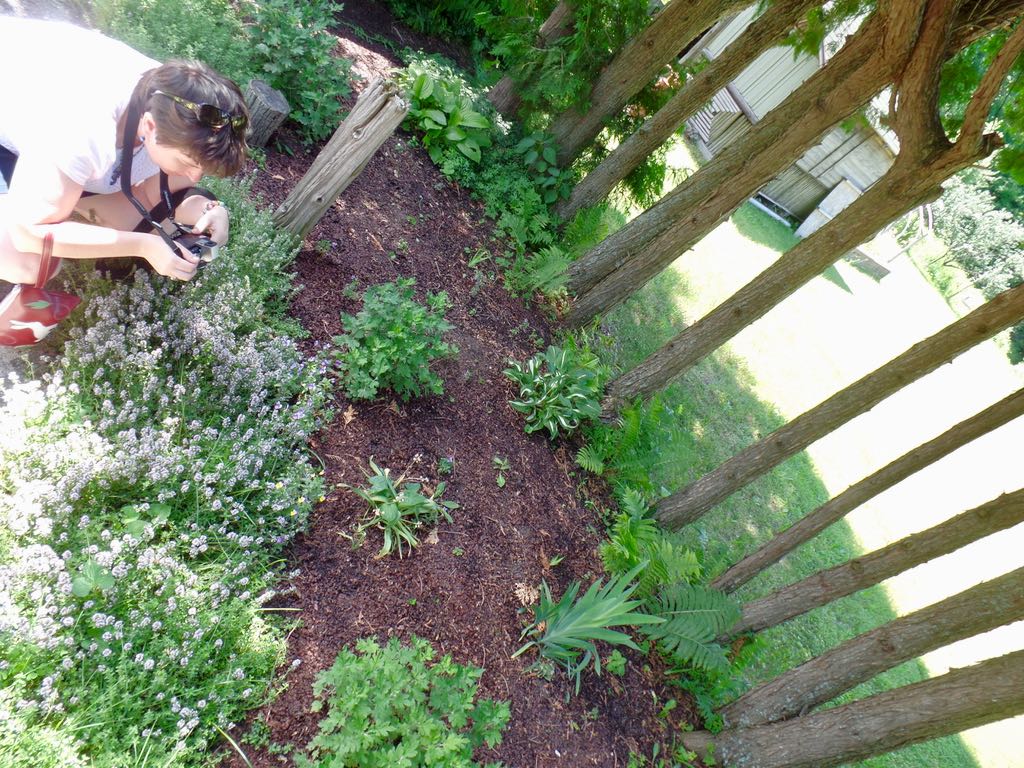 bunny_hugger stops in for some close pictures of interesting flowers before we see if they have any lavender cookies. 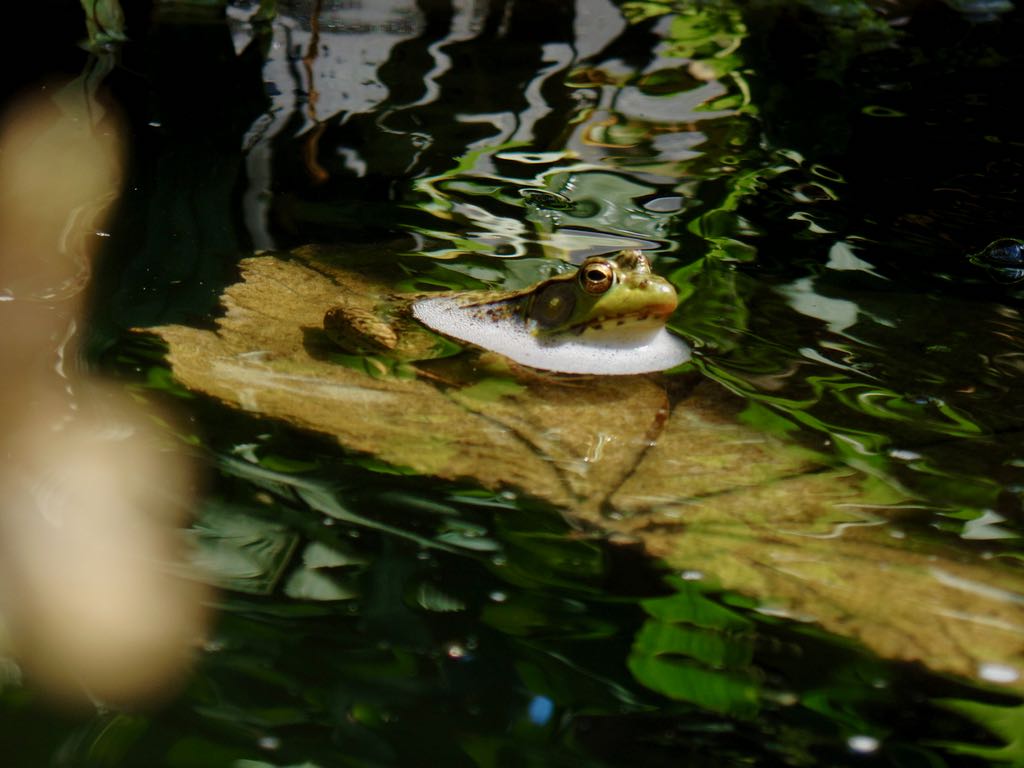 Real actual frog living in the small pond outside the herb shop. 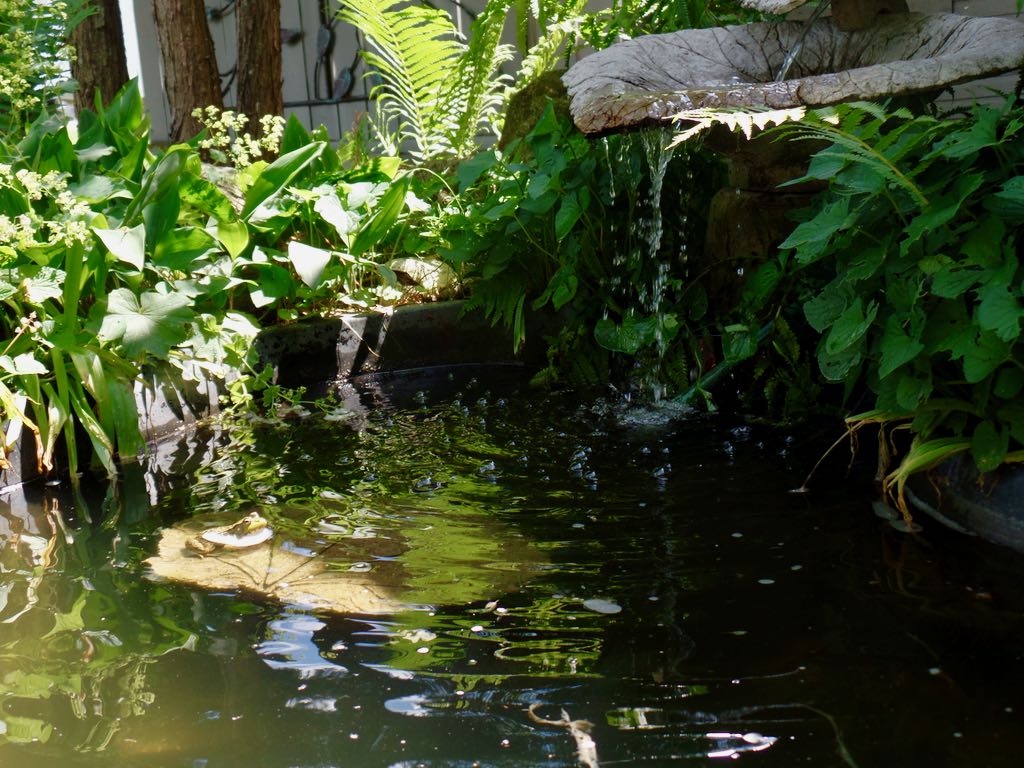 A bit more context for the frog and his cozy little hangout here.