'Cause times are pretty thin

bunny_hugger. We waited for the next round. And waited. And kept on waiting. There's two and a quarter hours between rounds at Pinburgh; this is typically enough time for even the slowest group of four players to finish. This year they've even instituted a ``mercy'' rule. A tournament official can decide that someone has such an enormous score that they can't be beat, order them to stop playing, and just award them a first-place finish. But still, sometimes, there'll be that concentration of great players on a long-playing game that a quartet will still be playing when the official start time for the next round has come.

So it was for a group on Set 57, Evel Jumps Over The River. There's three Michigan pinball players in this set, AND, CST, and BIL (of basement-tournament note, around here). Evel Knievel is their early-solid-state game, yes. But the long-playing one here is World Poker Tour, the modern game. They're all A Division. AND took 14th place last year. The fellow not from Michigan would end the day in 7th place, A Division. Their games keep going on. And on. Fifteen minutes past the round start. Thirty minutes. A tournament official invokes the mercy rule for one of the players. A crowd gathers around to watch what what's holding everything up. Another player comes back to beat the mercy-rule-imposed score. He, too, is ordered to stop playing; both are awarded first-place finishes and screw logical consistency. Finally, about fifty minutes late, the last player finishes the last ball and the round can officially end. There's some time as the organizers work out the new standings, and print up score sheets, and we can all move on, finally, to Round 7.

bunny_hugger is on Set 62, Of Of, Or Or. Its games are the Wizard of Oz (modern game), Spirit of 76 (electromechanical), Corvette (late solid state; it's really a modern game), and Super Orbit (early solid state), so you see why the set title makes sense. She's played all these but Super Orbit enough that she knows the rules. She goes 9-3, getting her to a 37-47 record.

I'm on Set 33, The ABCs of Flying. The early solid state is Gottlieb's 1980 Counterforce, a game of knocking down drop targets. But as time progresses a string of lights under the drop targets advances; the effect is a pretty convincing translation of Space Invaders to a pinball game. It takes us all a while to figure out what's going on. I do better studying the instruction card and learning from other people's work, and I take first place this game.

The modern game is Capcom's 1996 Airborne, a stunt-flyer game that nobody knows anything about because nobody ever sees Capcom pinball games on location. Even the skill shot is obscure and I have to watch about ten ball plunges before getting what I think is the point of it. Anyway, I come in last.

The electromechanical game is Sonic's 1977 Butterfly, and again nobody knows anything about Sonic games because they're from Europe Or Something. But electromechanicals are easier to parse; hit sets of drop targets and enjoy the crazy wild beauty of the backglass and all. I finish with what I think is a great score, and two other players go on to beat me. Third place.

The late-solid-state game is Williams's 1988 Jokerz!, another cards-themed game. It's a game everybody thinks they love because they're thinking of Joker Poker. Jokerz! is a lot of fun, though. One of the other guys gets the million-point shot going on his first ball and then, bafflingly, fails to collect. I joke to him, ``So, they used to have a Jokerz! where you play, huh?'' He insists he never touched the game before and has no idea how he did that, or how to collect that million. It's on the instruction card what to do, including how to collect. In the circumstances, I choose not to tell him what he's overlooked. (There's also a good chance that telling him would violate the rules about coaching. It's one thing for you to choose to help your opponent. But when there's two other people who didn't get to consent to the help you're giving?) Jokerz! has a famous exploitable trick. If you can send the ball up both ramps in the first ten seconds of your third ball, your score doubles. If you plunge just the right hardness, the ball will be launched to roll down the right ramp, which the game counts as getting the right ramp. Two of the other players try for this; I don't even try, because I've never known anyone who could get that to work, even with a game they've had practice sessions on. But that never-touched-the-game-before guy? ... He doesn't soft plunge. He sends the ball up both ramps within ten seconds playing legitimately. He takes first place and he's earned it; he's at about ten times my second-place score. Well, he deserves it, but I still don't tell him how to do that millions shot.

Round Eight, which starts just a little late, further spillover from that epically late first round. (While we waited for that round to start, a technician fixing something on Gottleib's Hoops shared with us appreciation for the weirdness of Game Plan's 1985 Andromeda.) MWS is assigned to Set 11, Trash Pandas Doodling, the set that

bunny_hugger played ... five rounds ago. He goes 7-5, rising to 51-45 and getting to 37th seed. If he can hold the spot, he's in playoffs. JTK is on Set 70, Green Belt, Blue Belt, Purple Belt.... It's got the karate-themed Black Belt game in it. Also Harlem Globetrotters. And it's one of several banks on the elevated platform of the main stage, on games scheduled to be part of the A Division Finals the next day. He goes 3-9, dropping his standing to 42-54.

bunny_hugger is on Set 44, I'd Like To Buy An A, which MWS was on just ... one round ago. She knows three of the four scheduled games well. The modern game, Wheel of Fortune, grew to be an unlikely favorite of hers at Blind Squirrel League. The electromechanical, Jungle Queen, we know from MJS's pole barn. It's the game I lost the D Division tiebreaker on last year. The late-solid-state is Elvira and the Party Monsters. It's the late-solid-state Elvira game that

bunny_hugger plays less often, but she still knows it well enough, and it's even got a reference on the playfield to our local arcade magnate Pinball Pete's. The early-solid-state is Volcano, part of my famous-to-me 0-12 round at the 2016 Pinburgh.

For all those good feelings going in about this slate --- she likes three of these games, after all --- she will go 3-9. Her record falls to 40-56. Even a perfect round wouldn't get her above .500, and making playoffs would require a fair number of the D Division players to suddenly fall dead, so this makes for some great talk over lunch.

I'm on Set 17, Gunfire Likely, with a bunch of people I don't know. The early-solid-state game is Gottlieb's 1978 Joker Poker, a glorious sets-of-drop-targets game that we all put up good games on. Two people put up great games. Third place for me. The modern game is Williams's 1995 Dirty Harry, reflecting the hit movie license of 1995? Well, I feel confident about it after all that good work at the Baby Food Festival, and moreso when I'm the only one who knows how to shoot the super jackpot from the start-of-multiball shot. I don't get my rhythm going, though, and I get another third-place finish.

The electromechanical is Williams's 1967 Magic City, which I've been playing at the Silverball Museum for up to a decade now. Also which I keep thinking of as the Apartment 3-G-themed pinball game. There's no good reason for this, but, boy, look at the art on it and then pre-collapse Apartment 3-G? You know? I'm the only one who quite gets their game together, and enjoy a first-place finish finally.

The late-solid-state game ... there's not really a late-solid-state game. We have Williams's 1993 Indiana Jones: The Pinball Adventure.. Not all the sets are balanced quite right, probably because they just need so many of them. Indiana Jones, in gameplay, is closer to a late-solid-state than, say, Dirty Harry would be. And, hey, definitely get guns depicted in the game, so there's that. And the good news: I know Indiana Jones: The Pinball Adventure! Love the game. The bad news: everybody at Pinburgh knows Indiana Jones: The Pinball Adventure! And they love the game too. Or would, if the table weren't set on Pinburgh-level-attendee-appropriate hard. None of us get a mode started, which isn't that rare --- the mode-start shot is hard, even on a table you're familiar with --- but only one person gets multiball started either, which is unusual. Indiana Jones you can go for modes, or go for multiball. Most people do at least one of them. Apart from the multiball person all our scores are under 60 million, which is about what the game gives you just for starting. I get another third place.

It's another 6-6 round for me, dropping my record to 52-44 going into lunch. But again, for me, that's just fine. I'm still 28th seed in the division. If I can hold to a .500 record I'll likely be in the playoffs. As the rounds in the day progress we play people closer and closer to our own record. The ninth round should be against people playing just about as well as I am. A 6-6 round would be exactly what I need. Any round above .500 is gravy.

I finish my round before

bunny_hugger. Her group was delayed by various things, including one of the games going down and being replaced with the early-solid-state Lost World. She'd like to love that game, but not the way it's playing for her. More fun for lunch talk. We have an hour and five minutes until the group photo session, and an hour and twenty minutes until the post-lunch play starts.

Trivia: The Wang Word Processing System, introduced in June 1976, had a cost (including hard disk storage) of US$30,000. Source: A History of Modern Computing, Paul E Ceruzzi.

Currently Reading: Spaceships: An Illustrated History of the Real and the Imagined, Ron Miller. Really like the subject matter, and there's a lot of great pictures. But the body text is this small medium-grey thing on a background that's short white-and-section-color horizontal stripes and, jeez, it's hard for me to read and my eyes are freakishly not-bad. Did no one at Smithsonian Books consider that people might try reading the thing?

PS: Some more storm clouds and we get heading back in at the Lighthouse. 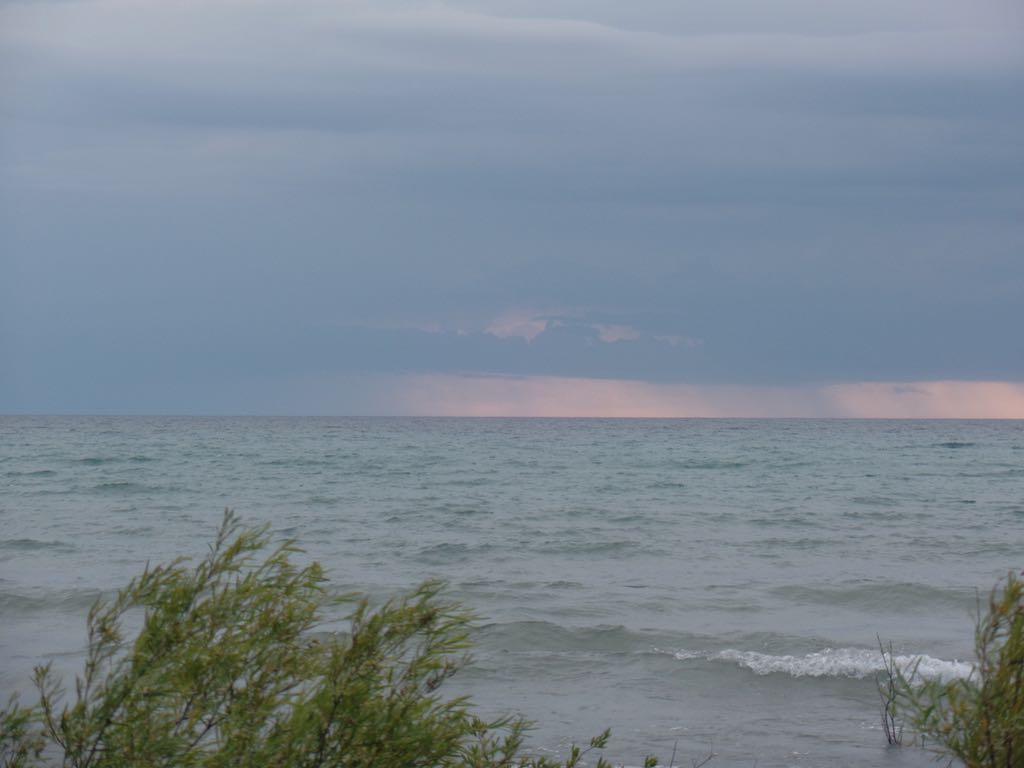 And so this is about when we figured we should pack up before we had heavy rain smashing down on us and we might have to run. 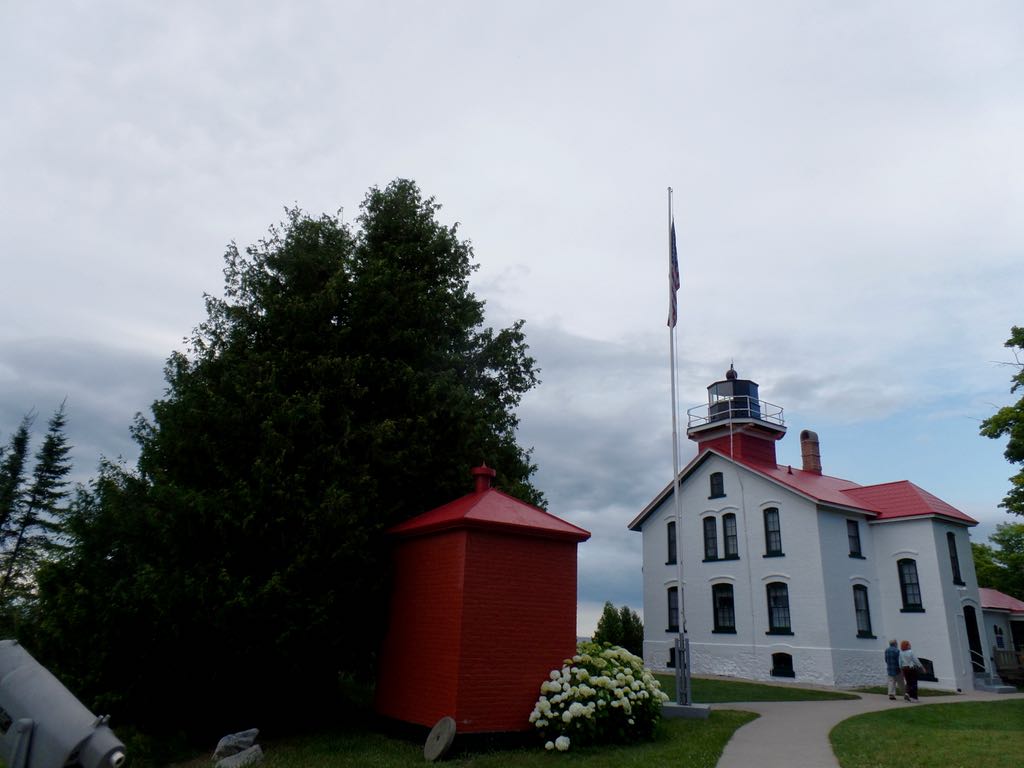 We walked back past the Grand Traverse Lighthouse, which was closed for the day already; the park was still open. 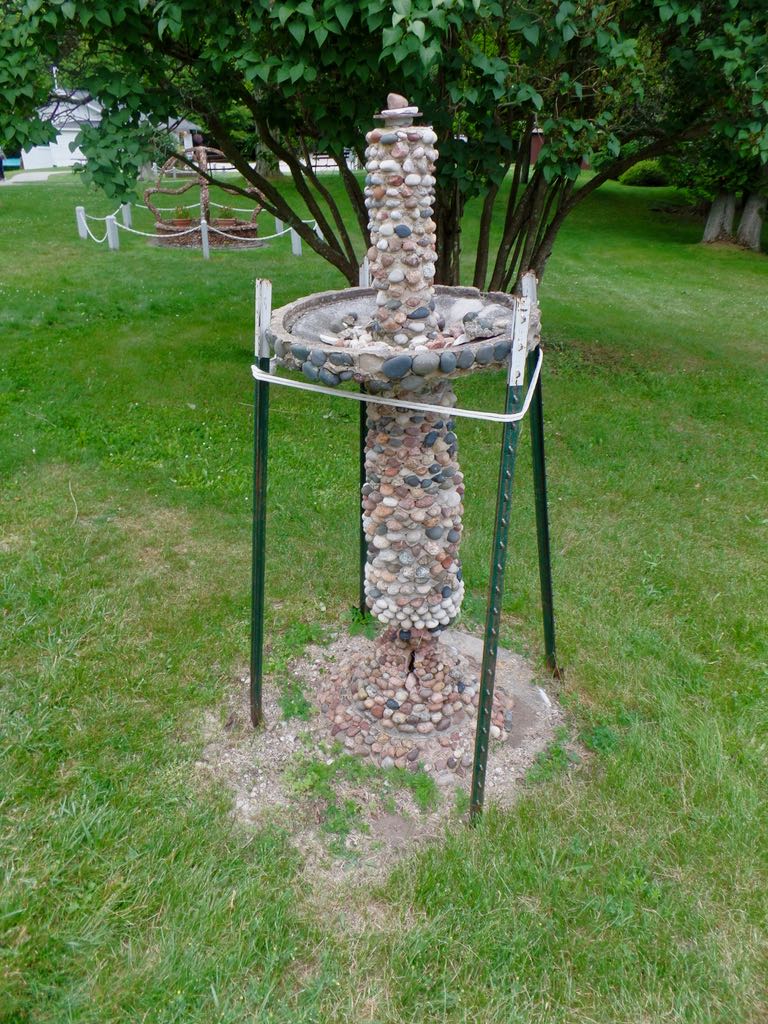 Two of several ground sculptures made by Grand Traverse lighthouse-keepers, using the stones of the area.