Try and do what you can

I don't make playoffs. MWS doesn't either. They worked this out while we were walking back to our hotel for the night, and I think MWS even got the news on his phone to report to us that way. Even if we had one more win, it would have been marginal. Eleven players are tied with 64-56 records for the eight remaining playoff spots. The tiebreaker is record at the end of the 9th round, and if that's not decisive, eighth round, seventh, and so on. So even if I had that one more win, I'd still have been behind Michigan pinball expert PH, who's the highest-placed player in C Division not to make playoffs. Well, we could sleep in, at least.

Also for Saturday we could play in the Intergalactic side tournament. This is a charity tournament, played Herb style. For your $20 donation we try to remember whether it was $10 or $20 last year. I didn't play last year, as I was worn out from D Division finals. My memory of two years earlier is too vague to say anything. But we do know you used to pick which of five charities your donation went to; now, no, it's just donated somewhere. They do have a better system of monitors telling you what the queues are like, though, and their app is pretty good at telling you when you're due at a table. Anyway, there's twelve tables, from electromechanicals through modern games. You buy ten tickets and can put in games on any of them. Your four best games count towards getting you in playoffs.

I have one exceptional game. On Bally's 1971 Four Million B.C. I just have a golden game. I find the skill shot plunge early on. I find how to lock balls in scoops. I find how to release balls from scoops. I find how to get the zipper-flippers to zip together, making losing the ball down the center impossible unless you screw up. I have a game that keeps going on and on. I start to think I might roll it. I don't, but I do finish the game eventually with 61,310 points and a smattering of applause. It's the highest score anyone records on Four Million B.C. through the tournament, something I keep on not believing because it's not at all believable. I don't have any nearly so good games, relatively, on anything else, and I'm not in danger of being among the top forty people who'll be invited to a four-strikes tournament Sunday morning. But I do have that one outstanding game to remember.

None of our group makes the Intergalactic playoffs, or comes close. I don't understand how anyone does. We spend the day enjoying things at the convention. Cosplayers. Arcade games. The tech guy who's wearing his furry-convention-casual skunk tail. Some pinball games outside the tournament area. At least the ones close to the Intergalactic bank; there's queues of like twenty minutes to a half-hour so you can wander away, but not too far away. We almost get in trouble with this. We go out for dinner at this complicated-custom-order taco place, and as we pay at the end of the meal we add ourselves to queues that turn out to evaporate as we walk back to the convention center. Run back, in my case, to put up a game that helps me a tiny bit but doesn't get me near qualifying for anything.

We do get to the Bit Brigade concert. This is a band that plays the background music to a classic old-style video game while one of their number plays the game. This time around, it's the classic Nintendo game I Think Legend Of Zelda? I Don't Know, I Don't Know Video Games. It all seems well done, and

bunny_hugger is thrilled when they work in some background music from Zelda sequels where repeating the limited original-game music would be a bit much.

bunny_hugger and her brother back in the day --- there's the chance of dying in the final battle. And picking up (videogame something else) makes it easier to recover from that. MWS and

bunny_hugger are satisfied with this not being the completely insane whack-job of a choice they had taken it for, but still feel they can't be seen with the player in decent company.

We hang around late enough to see the A Division Finals, on-stage and with color commentary and with play shown on monitors we can kind of make out from where we are. We don't know anyone playing, but we don't have to to be awestruck by how the ultimate winner, Keith Elwin, works bizarre supernatural magic on games like Harlem Globetrotters. He also comes pretty near cradling the ball on Doodle Bug, a game on which cradling --- holding a ball in the corner between the inlane return and the raised flipper --- is literally a physical impossibility. There's no inlane return on this game. Elwin's technique is an amazing bit of gently tapping the flipper to drain energy from the ball --- which you almost always want to do --- enough that he can send it where he wants. If mortal pinball players learn how to do this there'll be a revolution in gameplay.

Shortly after the A Division finals wrap up and trophies get awarded, at about 10 pm, we see something curious. People gathering around a tournament-looking person. Receiving sheets. Going out to games. Apparently there's yet another side tournament; this one, if I remember right, is a mass tournament among all the pinball podcasters out there.

I have no idea how it goes. We're heading back to our hotel.

bunny_hugger's side tournament, the Women's International Pinball Tournament, starts at maybe 9 am. We need a full night's sleep. We miss a couple hours of hanging around the venue with all(?) the games available to play. Also, it turns out, an epic game of this new comedy format called stall-ball. Everyone puts in a dollar ante. Everyone takes turns at the machine, playing until they do something that stalls out the ball, like shooting it into a scoop or an up-kicker or magnet that freezes the action. Anything that stops the ball. If you stop it by draining, you're knocked out. Last player standing wins the pot. (If there's more than four players, you start enough games to be decisive.) The only thing that could make this format more hilariously fun is some of the players being a bit drunk for it. Well, you can't do everything, and we get to try out stall-ball later on in side tournaments at Grand Rapids Pinball League and the like.

For now, a bit of hanging out in MWS's room and talk about the weekend and trying to understand what the heck movie they have on the TV (they don't know either, and the cable-box guide has no idea). It's a good way to unwind into the last night of ReplayFX/Pinburgh.

Trivia: In the 1830s the Faber company began manufacturing seven kinds of pencil leads, labelled, in order of decreasing blackness and increasing hardness, BB, B, HB, F, H, HH, and HHH. It's unclear where the lettering scheme comes from. Source: The Pencil: A History of Design and Circumstance, Henry Petroski.

Currently Reading: Spaceships: An Illustrated History of the Real and the Imagined, Ron Miller. So I know from experience that you finish writing a book one or two years before it's published, and I'm reading the book a couple years after it was printed. But, especially in a book that's just had several chapters about spaceships planned and sometimes even begun but never actually launched, how could you --- in a book published 2016 and so getting its final edit probably in 2015 --- allow the text about how NASA will land astronauts on the moon in 2018? ... Also, yeah, I understand feeling thrilled by ``what if the EmDrive could possibly work'' but, c'mon. The only way in 2015 you could have guessed that EmDrive would not work is if you had heard and understood clearly what it was supposed to do if it worked. Miller also writes as though the Alcubierre warp drive could somehow work, too.

PS: Reading the Comics, September 14, 2018: I Already Forgot What I Said About Randolph Itch Edition, like it says on the tin.

PPS: And here, let's close out Saturday at our rented house in Omena. 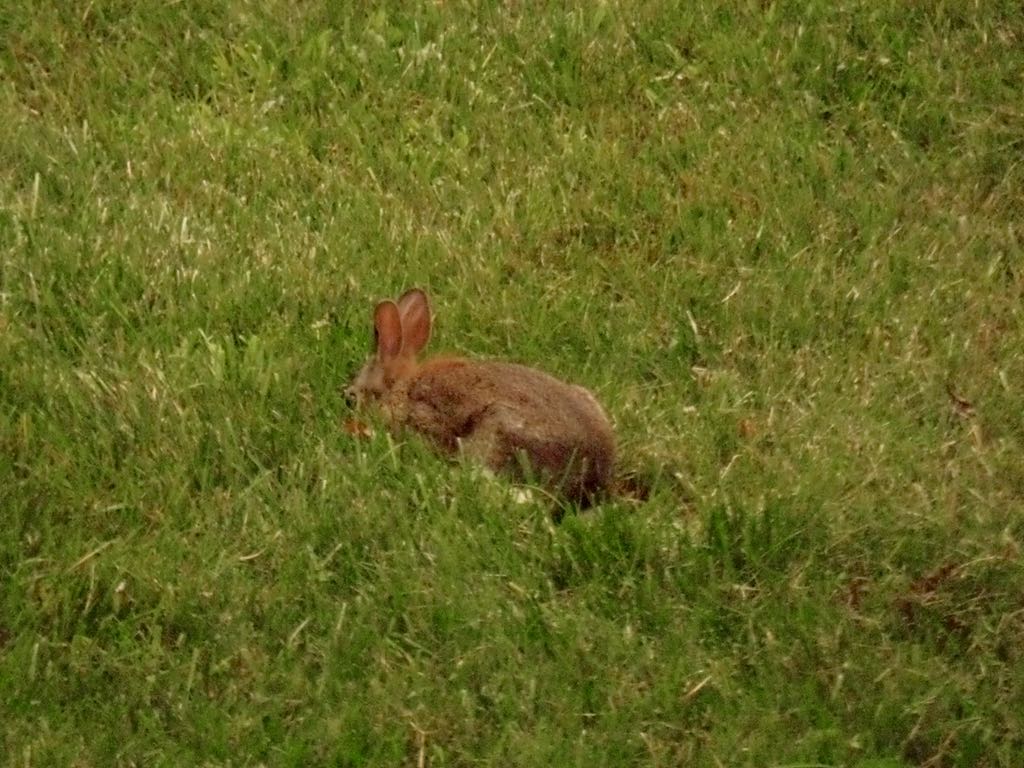 The local rabbit going about bunny business in the backyard. 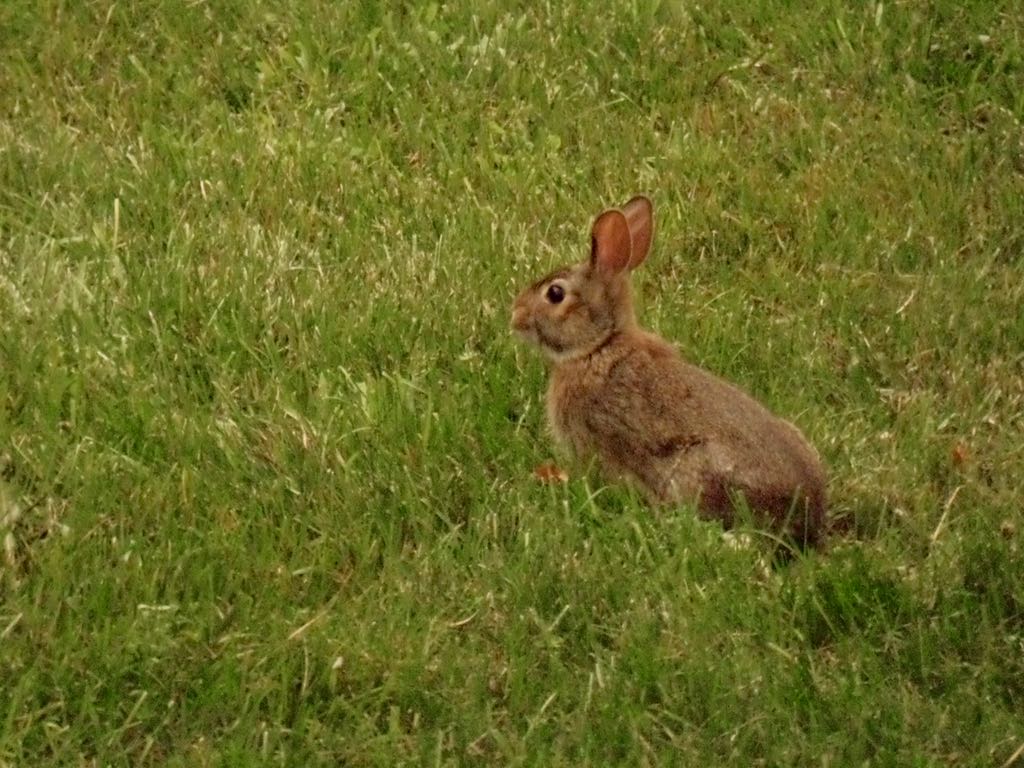 Did the rabbit notice me, even though I was photographing from inside the house? 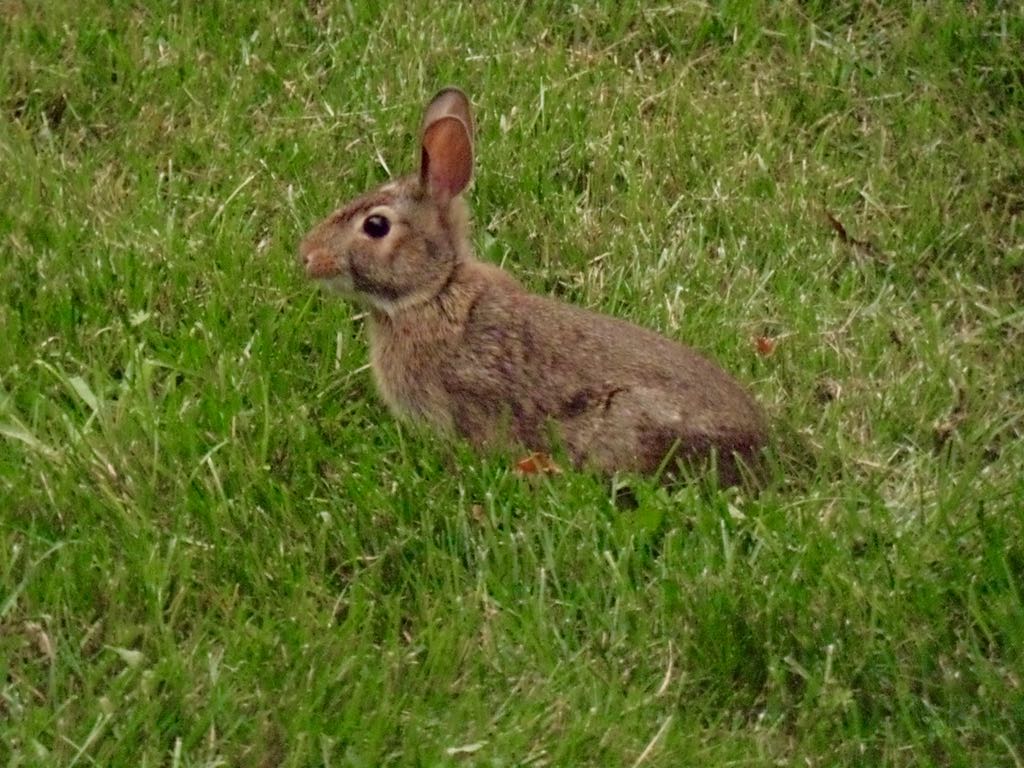 The wild rabbit gives this some serious consideration (and, ultimately, leaves before

bunny_hugger can get her good camera ready; I thought she'd seen the rabbit sooner than she did, cheating her of valuable prep time).