Rabbits in a hurry always drink too much

So we got together with MWS and JTK and walked back to our hotel. We do have specific plans for the evening. Our ambitions to do amusement park trips before and after Pinburgh crashed against responsibilities and pet needs and our rabbit Penelope's death. But ... we did still have an evening free. And Kennywood was right there. Why not do an evening, half-day, trip to that fantastic amusement park?

You can get into Kennywood, like many amusement parks, relatively cheaper if you go after 5 pm. And this worked great for us since we parked in the parking garage next to last year's hotel, the Embassy Suites. The one that had the gate open because they don't charge to park Sundays. This gave us, last year, the incredible deal that we got a half-week's worth of parking for one day's charge. We hoped it'd be the same this week. So we got ready, got motion sickness pills, and ... waited a half-hour. MWS was pretty sure the gate only opened after 6 pm. We weren't so sure, but then, a couple minutes' pause before heading out for another big activity didn't seem like too riotous a price to pay. It meant we got to Kennywood at 6:30 in the afternoon, though.

So not only would Kennywood be cheaper than a full-day admission. For two of us it'd be free. (We pooled our money to buy two more tickets, so we each got in for a net $15.) CST had somehow got hold of two ``Group Funday Tickets'', good for one admission each. No idea how. The tickets said VITAC, a company name you maybe know because they do closed-captioning for TV shows. My odd Internet Twin JHE, whom we saw at Pinburgh in 2016, used to work there. How a closed captioning group event's tickets got to CST, a veterinarian, is another mystery. Also a mystery: according to the sign stand outside there were NAPS in Pavilion 4.

The great thing about stopping in at Kennywood is that we were in Kennywood. The down side is, so was everyone else; the day was gorgeous and the park surprisingly busy considering they'd announced their closing to be 10 pm. (Kennywood has projected closing times, but adjusts them --- earlier or later in the day --- to reflect crowd conditions and, I assume, staff availability.) It would be hard to get to even just all the roller coasters, plus can't-miss attractions like the Turtle ride, given this.

We did pretty well, though. We got only one ride on the Racer, the Möbius-strip racing roller coaster. But then we only got one ride on it last year. This time around MWS and JTK rode the opposite side of the coaster from last year. They were thus able to increase their count of roller coasters ridden. We also had a fine ride on Thunderbolt --- celebrating its 50th anniversary in its current configuration --- following an even better wait for the roller coaster. What we noticed during the wait was several rabbits out for an evening graze in the lawn of the roller coaster's infield. And they were out for a good long while. The only down side is that my best action shot has the leaping rabbit obscured by the roller coaster's guy wires. Still, that does mean there's setting to the picture.

We had a good evening ride on the Turtle. There's two of these rides left in the world, one in western Pennsylvania at Kennywood and one in western Pennsylvania at Conneaut Lake Park. You can feel really wildly out of control and it's beautiful there. And we got to have square ice creams, one of several Kennywood special treats. Also to peer at the construction fence that blocks off the former location of the log flume. They took out the log flume last year, in a surprise announcement around Labor Day. They're putting in a new roller coaster there, part of a whole area themed to the Steelers. Kennywood also has a new area themed to Thomas the Tank Engine, which surrounds the Kiddieland area and also swallowed up the older train ride station. We didn't have the chance to explore it, though, and we have so little investment in the Thomas the Tank Engine universe that it's hard for us to feel anything particular about it. Other than to generally disapprove of old stuff being replaced.

If there was a mistake we made it was going to the Exterminator. This is a spinning wild mouse roller coaster, indoors. It's a fun ride. It's got a lot of props, to match the theme of mutant rats overrunning the city and National Guard agents trying to fight back. But it gets a long line, as wild mouse coasters always do. Wild mouse rides only take about four passengers per ride, and since they're small and fun and don't look scary, everybody wants to ride them. We spent about 45 of our available 210 minutes on this. I can't say it was wrong, especially as the other choice would have been the Phantom's Revenge roller coaster, which also gets a long line.

This took us to sunset, though, when Kennywood gets to be islands of neon light in seas of darkness. And we got a nighttime ride, in the back seat of Jackrabbit, the place to be for that ride. From there we made a smaller strategic error. We passed the merry-go-round, which we hadn't yet been on, and waited for a ride on that. But the ride operators waited an extremely long time to load the ride before starting, probably figuring to take up as much of the late-night crowd as possible. By the time our ride was finished, we couldn't get to the Phantom's Revenge roller coaster; its queue was already closed. So was the Kangaroo ride's. (The Sky Rocket roller coaster was closed the whole day. And, it turns out, it's been closed for months, suggesting some serious and maybe alarming problem with the ride.) Likely if we had gone to Steel Phantom or the Kangaroo first we could have gone back for the last carousel ride of the night.

Well, at least the Turtle ride was still open, and we could close out the night on that. Three and a half hours might not be enough time at Kennywood. But it's far better than no time at all at Kennywood, and it was at least a taste of the sorts of things that we had hoped to do, when we were planning our trip and nothing was getting in our way.

Trivia: In a secret July 1905 meeting, Secretary of War William Howard Taft and Japanese Prime Minister Katsura Taro agreed neither country would challenge Japan's invasion of Korea nor the United States's conquest of the Philippines, and informally allying with the United Kingdom to enforce the ``Open Door'' policy for trade domination of China. Source: The Imperial Cruise: A Secret History of Empire and War, James Bradley. (In summary this doesn't sound exceptional, but the important thing is that these plans made long-lasting foreign-policy committments, as good as treaties, that were never ratified by nor even discussed in the Senate. And that, per the summaries that survive, Taft explicitly warned they were making a deal that properly had to be a treaty but could not be because the Senate would never agree to it.)

PS: Let's take in some more of Columbo on Omena Beach. 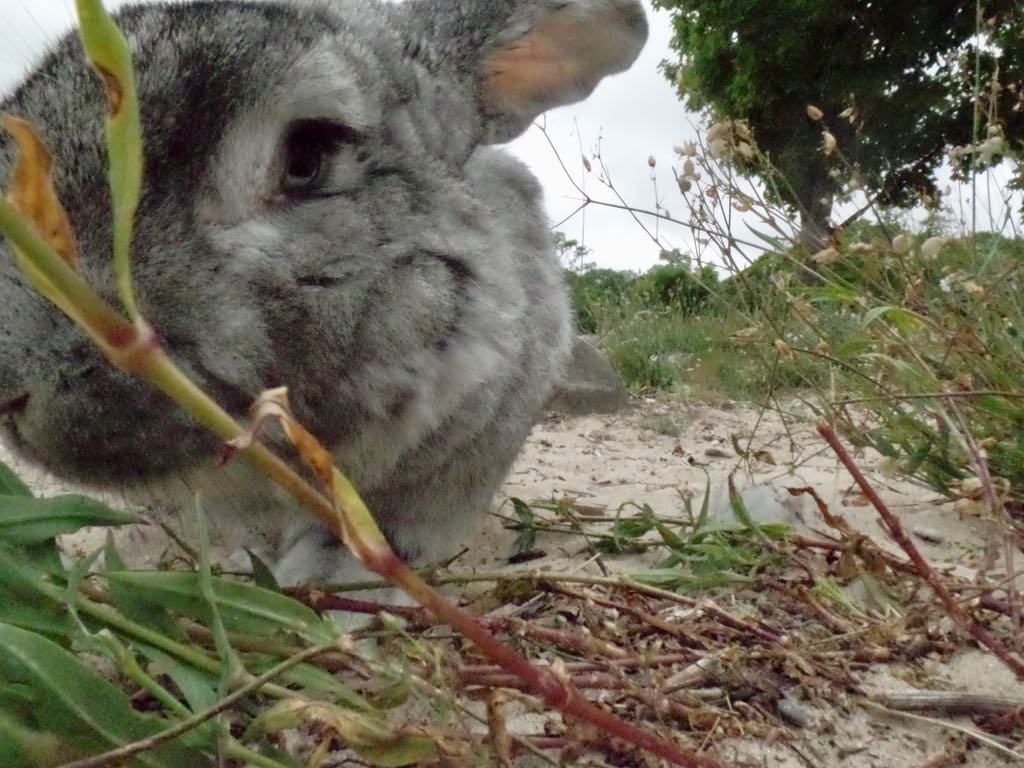 Columbo turns from one flower to face down you. Or me, really, but you. Oh gosh, look at that eye. 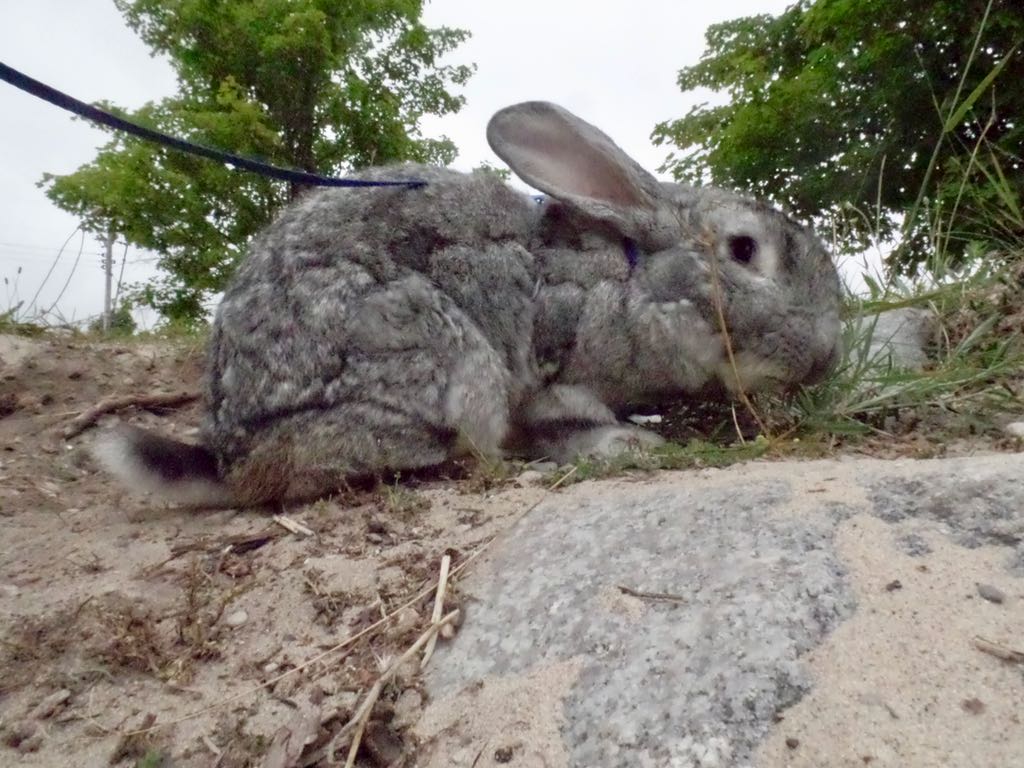 Columbo getting back into the grassy areas to have more of his fill. 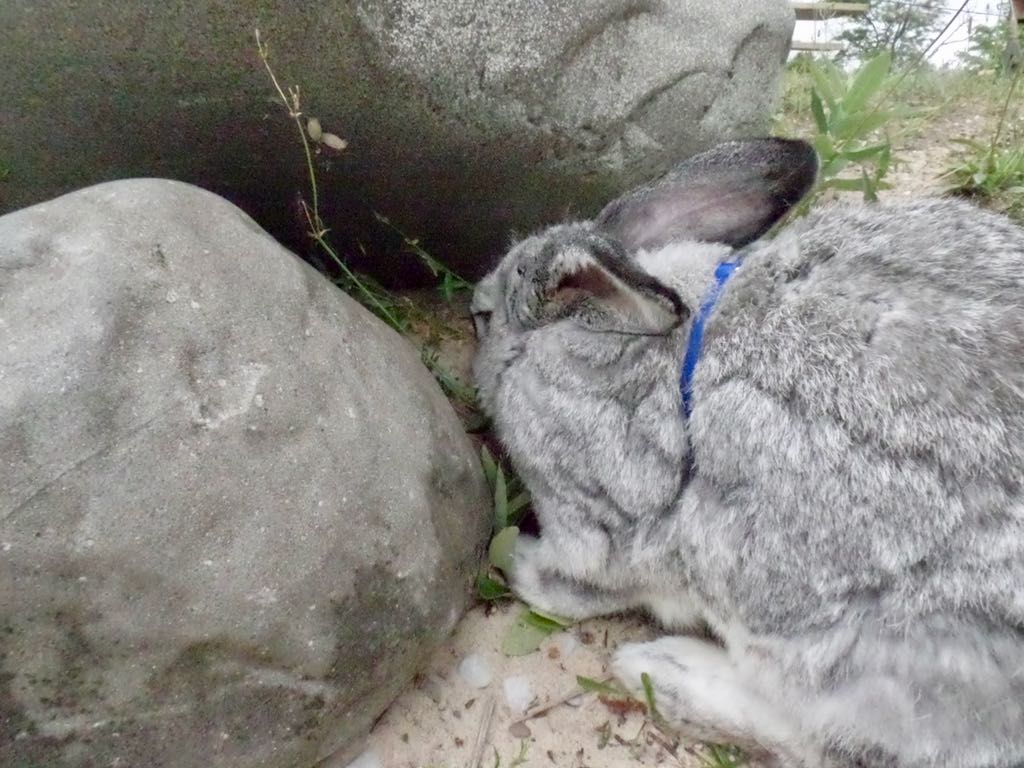 Poking his head in to the rocks and checking that action out.