We of course wanted to get to Michigan's Adventure earlier in the year and never quite managed it before Pinburgh. The weeks between Pinburgh and our next expedition looked like a not-ideal, but at least fair, time to go. August is busy at amusement parks. But then news came from Cedar Point: they were taking out a ride. The Witches Wheel. It's not a roller coaster. It's an Enterprise ride, the kind where free-hanging cars get rotated on a wheel that itself rotates up to vertical. It's an odd theme for an Enterprise. Also an odd location, near but not at the hotel entrance for the park, not quite near the Monster ride even though it seems like it ought to be. But it was a cherished ride from

bunny_hugger's childhood. This changed plans: we'd have to get there by the end of August and so we set a date to go for a farewell visit. Michigan's Adventure would have to wait for after our next trip.

As a courtesy we asked MWS, who's missed several years of Cedar Point, if he would like to come along, but we figured he'd wait for Halloweekends. He surprised us, wanting to come. He didn't think he'd likely ride the Witches Wheel, and in the event did not. But he did want to see Cedar Point after a couple years away. We don't often go to amusement parks with another person; it throws off our rhythm. But a thrown-off rhythm can be a good thing, if you do realize you do about the same thing every time. We avoided doing the same thing every time by leaving right about on time, and getting to the park for 2 pm, like we'd have hoped.

The park was busy. Not quite packed, but near enough. We got onto Blue Streak, the remaining wooden coaster, right away. That wasn't too bad a wait, although it was extended by someone taking out their cell phone on the lift hill, and a ride operating having to go up to the stopped train to confiscate it. Much of the day would be the disappointment of deciding rides had too-long queues to wait for, including particularly Iron Dragon with the virtual-reality goggles. Still don't think virtual reality coasters are that good an idea, but we have only ridden one once; we might be missing something. So we missed it again.

Gemini, the racing roller coaster, opened 40 years ago. It's being observed in a modest way; the park no longer has signs out front announcing what rides are having anniversary years. But the ride had outside it a sign urging one to celebrate good times, and bring your best moves and positive vibes. The speakers around the area were playing extremely disco songs. The bottom of the sign included a spoof of the health-and-safety warning outside the ride's entrance. The spoof warned of how many songs played at the ride were dynamic and thrilling, and there are inherent risks to listening to disco music, and you should be in good health to groove safely. And that guests with excessive gold chains, lycra, or hair gel should refer to the ride admission policy. Fun stuff, and the Gemini line was short enough --- well, it has got two coasters running each dispatch --- that we got on that.

bunny_hugger and I took a ride in the Witches Wheel right after that, in the sunlight, getting photographs of the whole thing. Including from inside the car once it had come to a stop and they were unlocking the cars. So you know how far we're willing to disobey the rules about not having your cameras out during a ride. We would also get a night ride while MWS looked on. During the night ride he thought seriously about whether to go on, but thought the cars were rocking just enough that he would get seriously queasy. Probably fairly.

We went back around to the Colosseum, which I keep thinking should be named the Casino, to try out the pinball games back there. They've been in ever-worse shape each time we visited. This time the only games not out of order were Spirit of '76 and the two Hercules tables. It's touching that they still have the games around, but if they're not going to fix them ... well, why bother? We played what we could, including a round on one of the Hercules tables that went fairly well, considering. Hercules was this Atari-made novelty that's about twice the size of a regular pinball table in each dimension. The trouble is the playfield has to be nearly level, so that the cue ball-sized ball doesn't come rocketing down, and this leaves the game floaty and slow. Also, this time around, the ball would get stuck under the right flipper if it drained on that half of the table; you had to press the flipper button to let it drain. That's more a little embarrassment than a serious game malfunction, but still.

We would spend, for us, a lot of time in lines. Partly because it was a busy day. Parly because MWS hadn't been to Cedar Point since before the ValRavn roller coaster was built, and he wanted to ride the new things, naturally. So we can't fault him for taking the chance when the ValRavn line seemed surprisingly short. It was short because the ride had been having some kind of problem that forced them to take trains out of service, and send test trains around, and then bring a train back into service. I think we had a shorter wait than would normally expect for the crowd size. Still, it's a ride

bunny_hugger and I would have skipped this particular visit, had we been there ourselves.

Really, had we been there by ourselves we'd probably have stayed for a nighttime ride on the Witches Wheel and then gone home, with maybe a closing visit to Blue Streak and one or more carousel on the way out. But MWS hadn't yet ridden Steel Vengeance, the hybrid steel coaster built out of the remains of Mean Streak. Given this might be his only visit to the park this year, it seemed unfair to not give it a try. We went at the end of the night, when we hoped the crowd would have thinned out some. And it had, I think, but it still promised an hour and a half wait for the ride.

Since Steel Vengeance opened, and since we got our first ride in June, there've been some changes. They got operations to where they can run two trains. But they've had incidents of people taking out cell phones, which is crazy dangerous. So now they've set a rule that you can't have a cell phone on the ride at all. Stow it in a locker. Or, just leave it inside your pocket all the while you're in the queue, which you can get away with. Yes, they have cameras watching for. Also employees strolling the lines. It seems to be working to get better phone behavior out of people on the rides. The downside is it means you can't photograph the scenery while on the queue, which is a shame. For one, the queue wends its way through the infield of the roller coaster, and it still has those massive and numerous wood trusses from when the ride was Mean Streak. They're gorgeous. For another they worked to put up stuff to look at and read while in the queue. Cedar Point is building a complicated little mythology for their old-west-themed area there. We got some pictures of this back in June, but now? No. We'll have to wait until cell phone security slacks off to get snaps of things like the roster of characters and their biographies.

We would get our ride, of course. If you're in the queue by the time the park closes you get your ride, barring extraordinary circumstances. And it was fantastic. Steel Vengeance does that terrible thing where it's too good to hold its origin against it. We lost Mean Streak for the ride, but they made a really fantastic ride out of its bones.

But it kept us at the park more than an hour past closing. In some ways that's great; the park, quiet and nestled in for the night, is this strange alien thing we almost never see. But we did have to walk from the far end of the park to the front to get to our car, for one thing; that's a good mile and a half, easily. And it meant we missed the chance to go to the gift shops, which had given up on the trickle of people still leaving rides by the time we were around. Cedar Point's gotten in some retro-themed T-shirts, including for Disaster Transport, which closed in 2012 and was the subject of

bunny_hugger's and my first emergency farewell trip to the park. No chance to get it then, though. If we'd strategized better we'd have gotten it before joining the Steel Vengeance line, and figured somewhere to hide it on our bodies during the ride.

We spent a good ten and a half hours at the park, which is more than

bunny_hugger and I typically do even at Halloweekends, when we stay at the park all weekend, anymore. We didn't get to all the roller coasters; the queues just didn't permit. And rides kept going down, to our surprise. MWS saw on the ride-queue app that Raptor kept being reported down, and up, and down, and up, and so on. But still, we were able to get onto about ten of the roller coasters there, and to spend a fuller and more exhausting day there than we usually would.

We got to our home a bit after 3 am, So did MWS; we'd met up with him outside Ann Arbor, at a commuter parking lot that's surprisingly hard to find even when you roughly know where it is. When we'd gone to meet him in the morning a car behind me started blaring her horn, offended that I stopped where the red traffic signal was. (A number of people had also been stopping just short of that, where the off-ramp intersected the crossing street; charitably, she might have got fed up with people stopping for apparently illegitimate reasons and taken this as the last straw.) But there was no trouble like that at this hour of the day. We just had to face getting up anytime the next day, after all this much amusement park.

Trivia: In summer 1637 --- not quite six months after the tulip crash --- Aert Huybertsz of Haarlem paid 850 guilders for a single bulb of the Manassier variety. The dealer, Jacques Bertens, had himself bought it for 710 guilders, and so made a profit of 140 guilders, about six month's wages for a local artisan. Source: Tulipomania: The Story of the World's Most Coveted Flower and the Extraordinary Passions it Aroused, Mike Dash.

PS: My 2018 Mathematics A To Z: Asymptote, starting my first big series in over a year, and this one with a serious deadline attached! That'll go great!

PPS: I took a handful of pictures at the Baby Food Festival in Fremont last year. Here's how it came out. 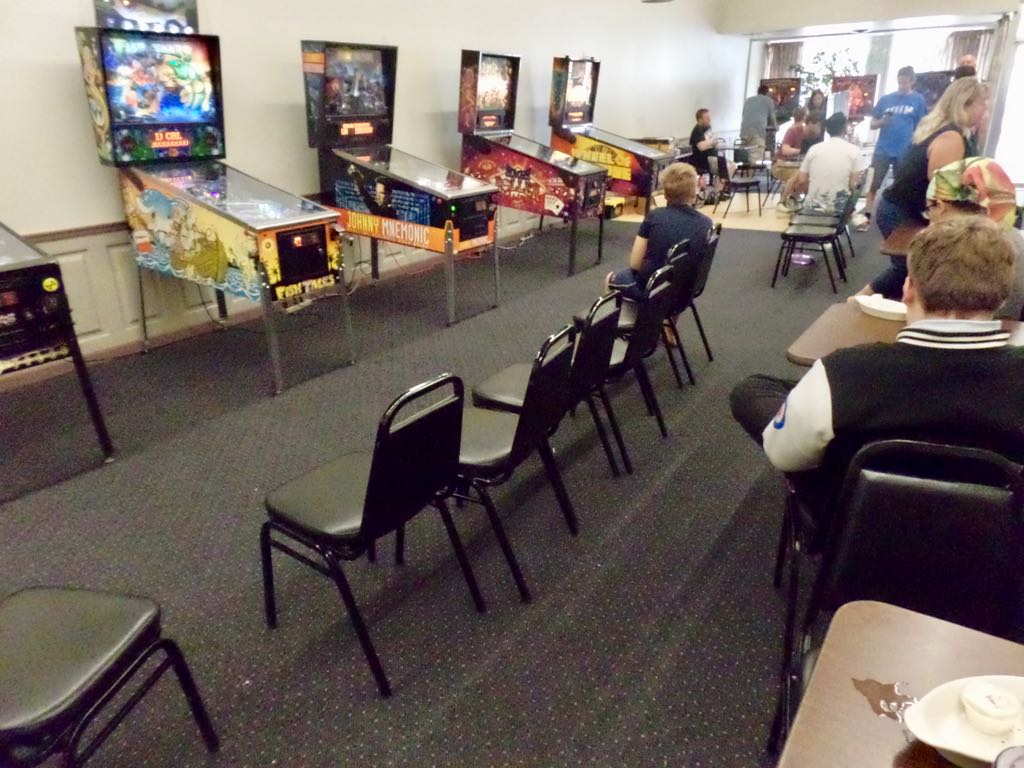 The Baby Food Festival open pinball tournament for 2017, which was probably the last year it's going to be in the event space of this diner since the place was turned into a clothing store. 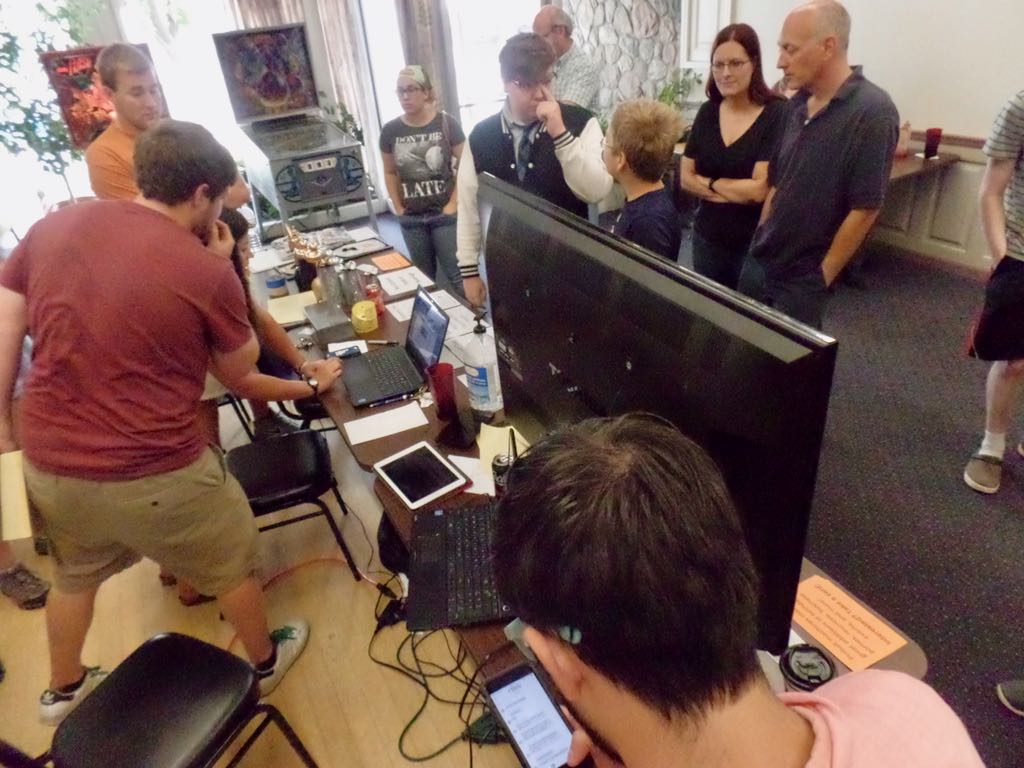 What it looks like when they're getting playoffs organized for every pinball tournament ever, basically. 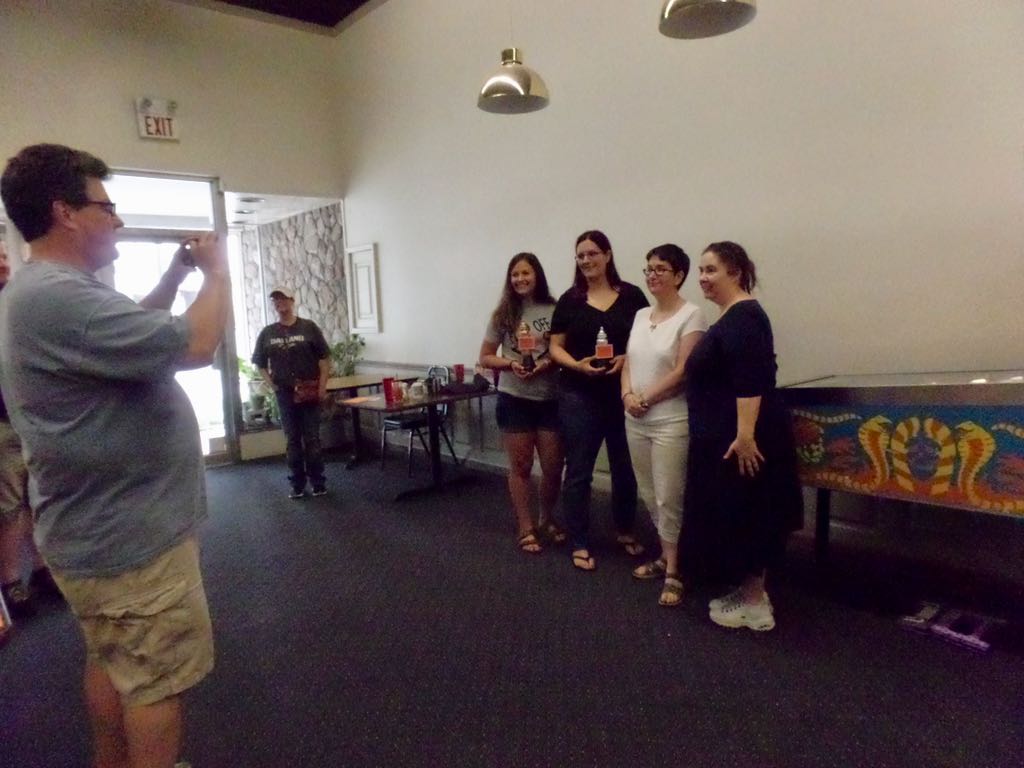 bunny_hugger and the other top four women's finalists posing for their group photo. Note

bunny_hugger not seething at coming in third place when there were only two trophies.