I love to listen to the wind through her strings, the song that she sings for the town

bunny_hugger was feeling embarrassed. Hancock is in the Keweenaw Peninsula, the relatively little peninsula on the northern end of the peninsula, sticking out into Lake Superior. My thinking was, for my first trip, let's really see it. We planned on a short trip, only four full days, because apparently we are incapable of learning after the frustrations of our other short trips this year. Well, we had to get back in time for Lansing pinball league, and we couldn't leave much sooner than we did.

For a wonder we got started about on time. We'd need to, too. We had AirBnB hosts who wanted us to check in before 11 pm. It's at least eight hours driving, without breaks, to get from Lansing to Hancock. And so we started off, the first hour driving the same path

bunny_hugger takes to work several times each week all the academic year. The next quarter-hour after that to the Clare Rest Area, the halfway point in going to Traverse Bay. But then we stayed on US 127, driving ever-northward, to meet with I-75. We stopped in Gaylord, a town just about on the 45th parallel, for lunch. The town has this alpine-village motif going, with all the buildings on at least the main streets done up to look chalet-like. Some of the shops are clearly just going along with it and hoping the zoning board will outgrow this; we stopped, for example, at a Rite-Aid that just added some heavy wood framework to the front and part of the side, and otherwise tried to be the same big box store as anywhere. But our search for lunch was brilliantly successful. We found a mediterranean-food place and got a two-person appetizer plate of hummus and vegetables and pita and all that. And also you can get that kind of food in a tiny northern-lower-peninsula town anymore.

Another not-quite-an-hour north and we got to Mackinaw [sic] City. This is the city on the southern end of the Mackinac [sic] Bridge, linking the peninsulas. We wanted another rest break before the upper peninsula, where civilization gets sparse. And maybe an ice cream, which we didn't get. And to stop in a store. One that

bunny_hugger had visited in past trips to the upper peninsula, and dearly hoped was still there. Enchanted Knights. It's a shop full of fantasy-themed merchandise. Dragon figures. Knight figures. Puppets. Medieval-style costumes. T-shirts with Monty Python And the Holy Grail quotes on them. All sorts of great stuff that I don't really have the disposable income or storage space to need. Still came close, though.

bunny_hugger did find some figurines that were too adorable to pass up, including one of a rainbow-winged dragon and of an elven bunny who quickly became friends in the car, and since we got home in one of the little pots she's set succulents in.

We could've spent hours in the shop, easily. But we did get out to some other things. A couple candy shops where we didn't buy fudge for

bunny_hugger's father, because we figured we could get it as easily on the way back and that way not have to figure where to store it while we were up north. Guess who completely failed to think of fudge on the way back. Walking around taking pictures of the Mackinac Bridge from shore. Taking photographs of the north end of the Dixie Highway, which has a little historical marker. Wondering if there were a letterbox marking the start of that highway. ... We figured to do a lot of letterboxing on this trip, although we wouldn't in Mackinaw City. Also, going back past Enchanted Knights, we saw a guy in metallic paint on a bicycle, pretending to be a statue until he catches your eye. One of those fun things.

Trivia: The fuel preburner for the Space Shuttle Main Engine was about four inches long by ten inches across, and would have an internal pressure of 5,572 psi, among the highest in the main engine system. Source: Development of the Space Shuttle, 1972 - 1981, T A Heppenheimer.

PS: More from a short evening at Michigan's Adventure in 2017. 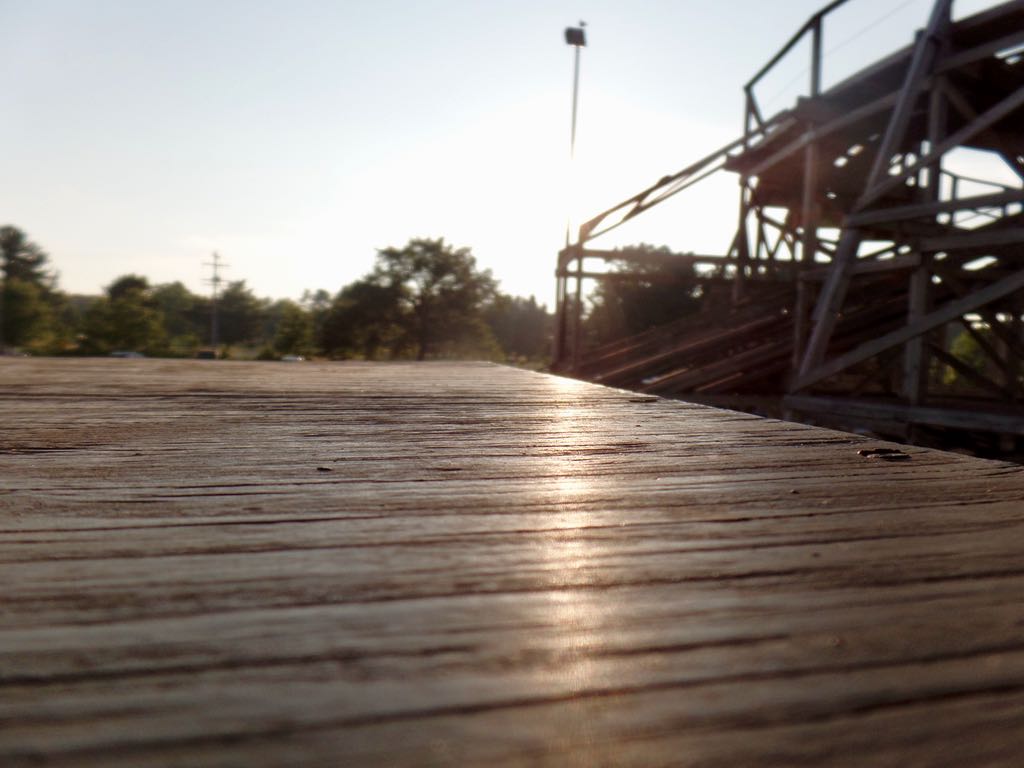 And here I get really arty, with a from the top of ... I'm not precisely sure ... but it's at Zach's Zoomer anyway. Maybe the top of the photo stand? 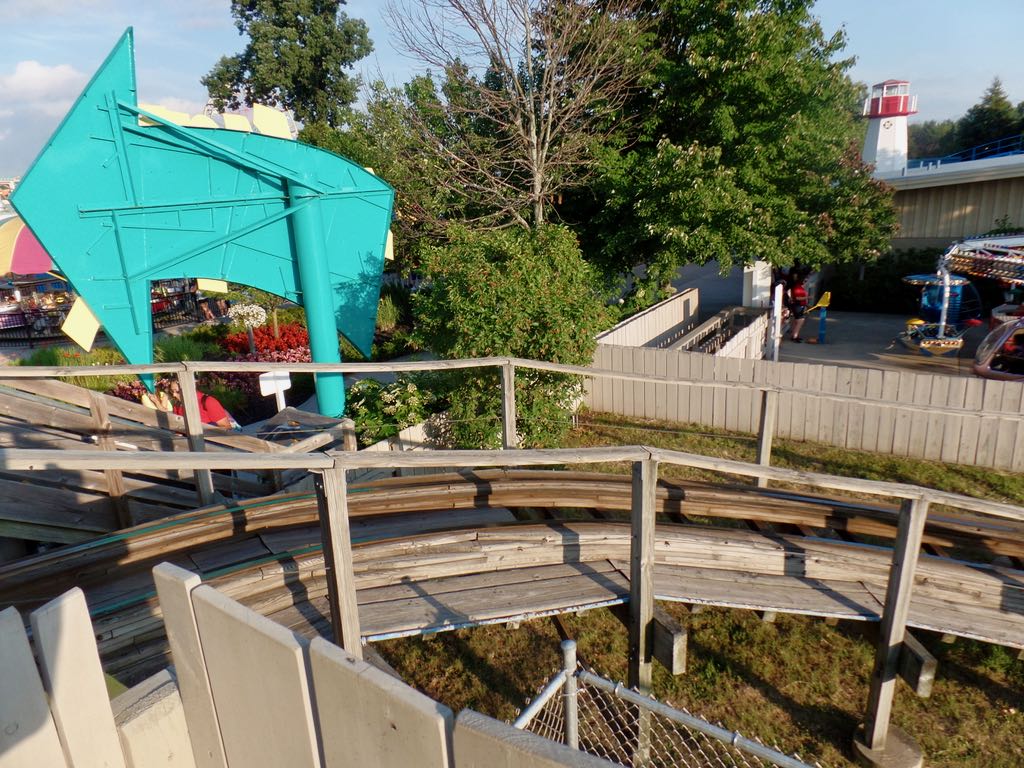 View of the back of the Zach's Zoomer sign (that big arrow) and looking back to the main area of Michigan's Adventure. 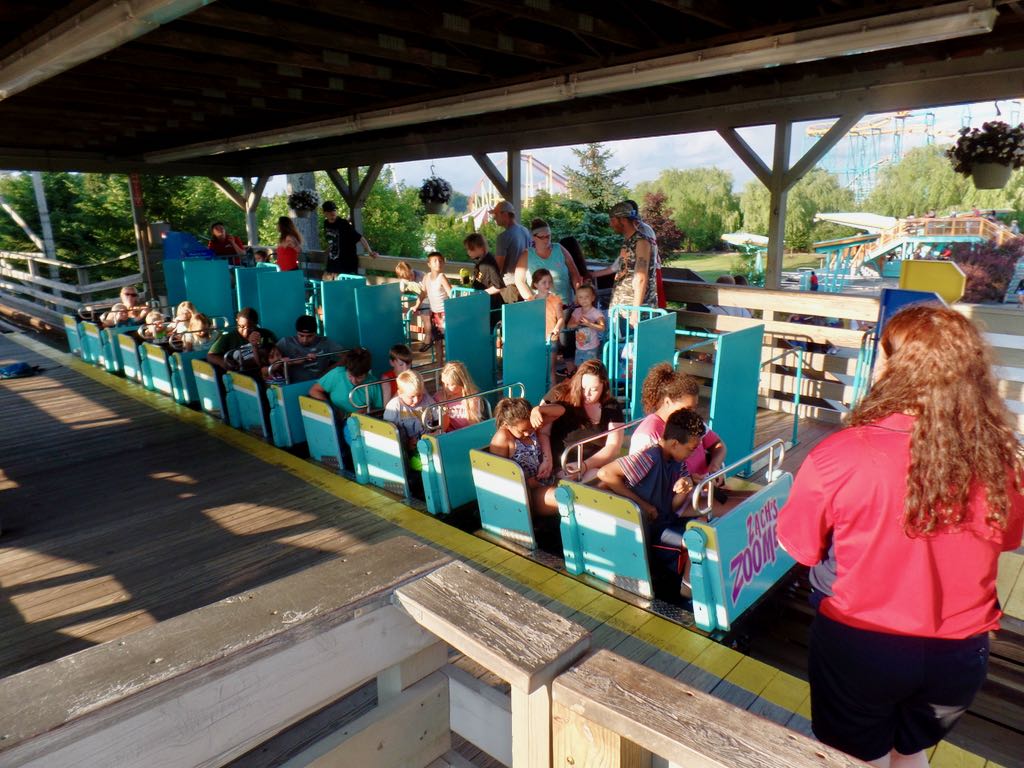 bunny_hugger and I just can't fit in a seat together, not now that they have seat belts and stuff.