So the Mackinac Bridge is big. Span of five miles. Height of 200 feet above the water. The inside lanes of the span are grates, open to the air below. This makes the bridge much more stable, but also makes a terrible noise, and makes the road shake the tires back in weird ways. Legend has it the bridge authority will have someone drive you over, if you're not up to the challenge. We didn't see any signs saying where or how to arrange this, though. It might be something from ages gone by that's not done anymore. What is still done is some radio transmission about bridge conditions. We tuned in. It was this five-minute spiel, starting from the first European explorers to see the straits. Agreement that a bridge would be great if it could be built. Then, hey, they built it. Some tourist talk about the upper peninsula. Not a word about the traffic conditions, though. But there weren't any traffic backups or anything. Just some construction on one lane that forced us from the paved outer lane --- where

bunny_hugger advised I drive --- to the grated inner lane. The important thing is that we drove without incident, without great winds, without trouble. Just the beauty of being high up on a long suspension bridge, and passing into the strange world of the upper peninsula, as the bridge's radio loop faded into crackling static. Also to Michigan's only toll plaza, US$4.00 for the ride in our car.

This started the second half of our drive. And kind of late; for all that we got started early, we lost time to lunch and then to wandering around Mackinaw City. The ride had a couple grand stretches here. One long run along US Route 2, tracking the northern end of Lake Michigan and wondering, wait, where's the eastern end of US 2? (There's an eastern end in the upper peninsula. There's also a separate, disconnected, part of US 2 from New York State to Maine.) And then turning away from that through the Seney National Wildlife Refuge, and northward to towns I kind of knew the names of. Munising, particularly, which interested me because we drove past the Dogpatch restaurant. It's themed to Li'l Abner, the longrunning comic strip that came to an end when Al Capp was too much into sexual assault for the 1970s to put up with. We didn't have time to stop for dinner, though, not without coming perilously close to our hosts' 11 pm cutoff for checking in.

Onward and into the late-setting sun. Besides being fairly far north, the upper peninsula is (like nearly all of Michigan) on Eastern Time, and Daylight Saving time, so around there near the peak of summer the sun will set around 10:30 the next morning. Seriously; the Keweenaw Peninsula is west of Chicago. Anyway. More places with great names. Marquette. Ishpeming. L'Anse. Another pause, in a nice-looking rest stop on the edge of the bay. And then the last leg.

Hancock is part of a pair of cities, built around the Portage Lake, that's also a canal at the base of the Keweenaw Peninsula. Opposite Hancock is Houghton, home of Michigan Tech. We had to go through that city to get to the one we wanted. It's kind of tricky. This part of the state gets a lot of fairly tall, rocky hills. It's reminiscent of driving through Pittsburgh. A lot of roads that struggle up and down the sides of hills and then have to double back. My satellite navigator was trying to keep up and I didn't feel at all sure we weren't going to get lost. Once we got through Houghton, and through Hancock, we went on ever-steeper, ever-darker, ever-stranger turns that we felt less and less confident about.

Finally we got to what must, according to logic, be the road our AirBnB hosts were on. The navigator took us to a spot where no structure was. We had to drive back and forth a couple times, getting increasingly worried that we were completely off course (but then how could there be a second hospital in this area of Hancock?) before we finally found, yes, there was a house there.

It was close to but not at 11, so we felt relieved. We didn't see our hosts, though. It was late. They were surely in bed already. We moved our things into our suite as quietly as we could. It was enormous. The whole basement floor, with more square footage than our house. Minifridge, freezer, microwave, dinner table, living room, separate bedroom, a weight room we didn't dare touch. A whole sauna for the shower.

What there wasn't, was a dinner. At least nothing substantial enough to eat. But there was a Taco Bell nearby, in Houghton. This would be the first in some complicated nostalgic moments for us. Twenty years ago,

bunny_hugger visited this area, with a friend attending Michigan Tech. Back then, the city was so remote that students would make the hour-long drive to Marquette, just to get to the nearest Taco Bell for the excitement. That friend graduated, and moved away. And, fifteen years later, dumped us after a fight in which we, selfishly, refused to compromise on whether my wife should accept harassment at the hands of an abuser they were sheltering. And the city grew, or at least got some of the same fast-food places everywhere else went. So we drove there, and found they didn't have a drive-through somehow. But the lobby was still open, and we could get some dinner and bring it back to our temporary home. And think of lost friends and new opportunities.

Trivia: The murder of Albert Snyder by his wife Ruth and her boyfriend Judd Gray, using mercury bichloride and chloroform, was used by novelist James M Cain as model for both The Postman Always Rings Twice and Double Indemnity. Source: The Poisoner's Handbook: Murder and the Birth of Forensic Medicine in Jazz-Age New York City, Deborah Blum.

PS: A couple more pictures of our short evening trip to Michigan's Adventure. 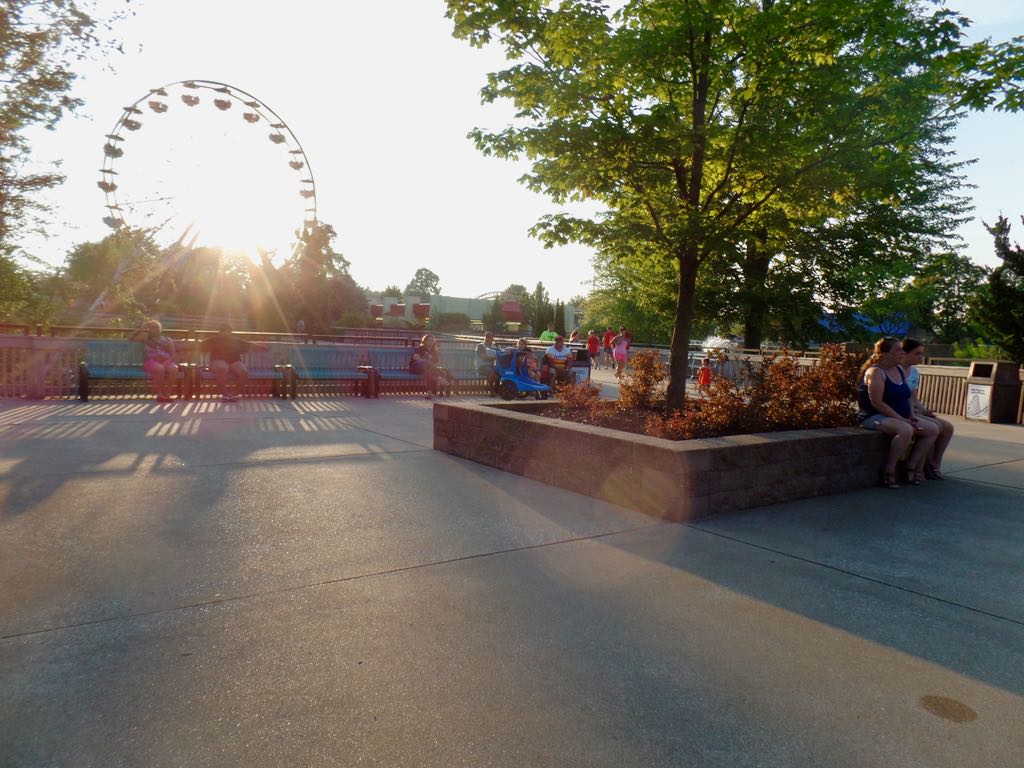 Evening-sun picture of the giant Ferris wheel and one of the resting areas at Michigan's Adventure. 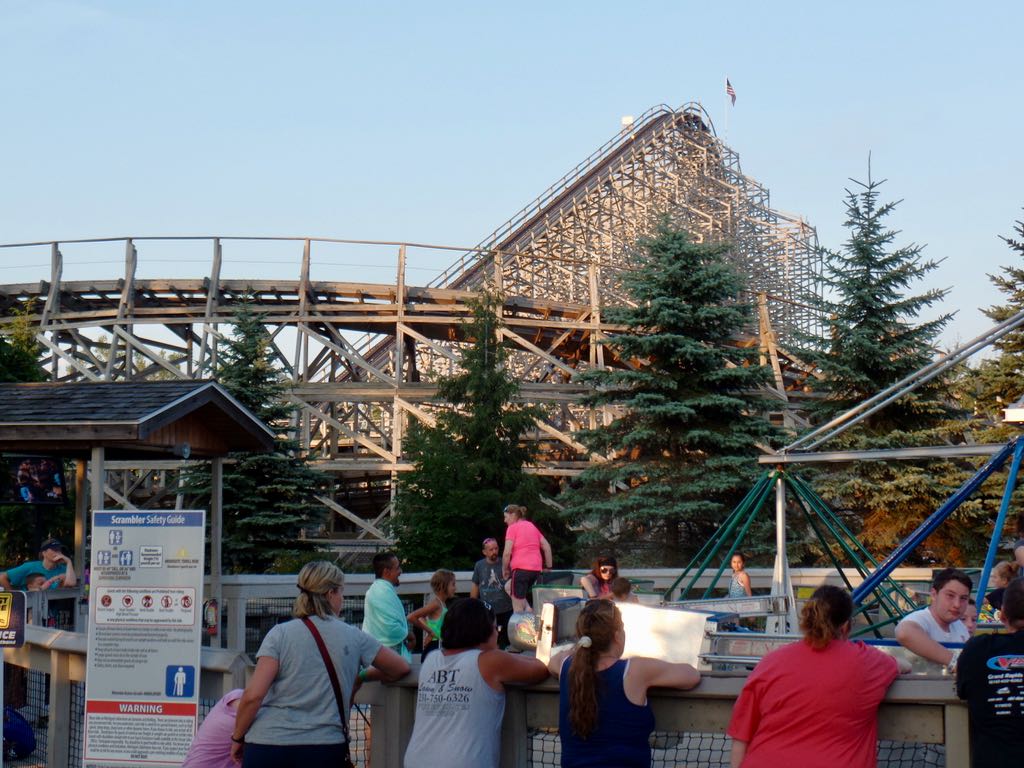 Shivering Timbers: the biggest and fastest of roller coasters at Michigan's Adventure. Also the Scrambler, since everybody likes Scramblers. 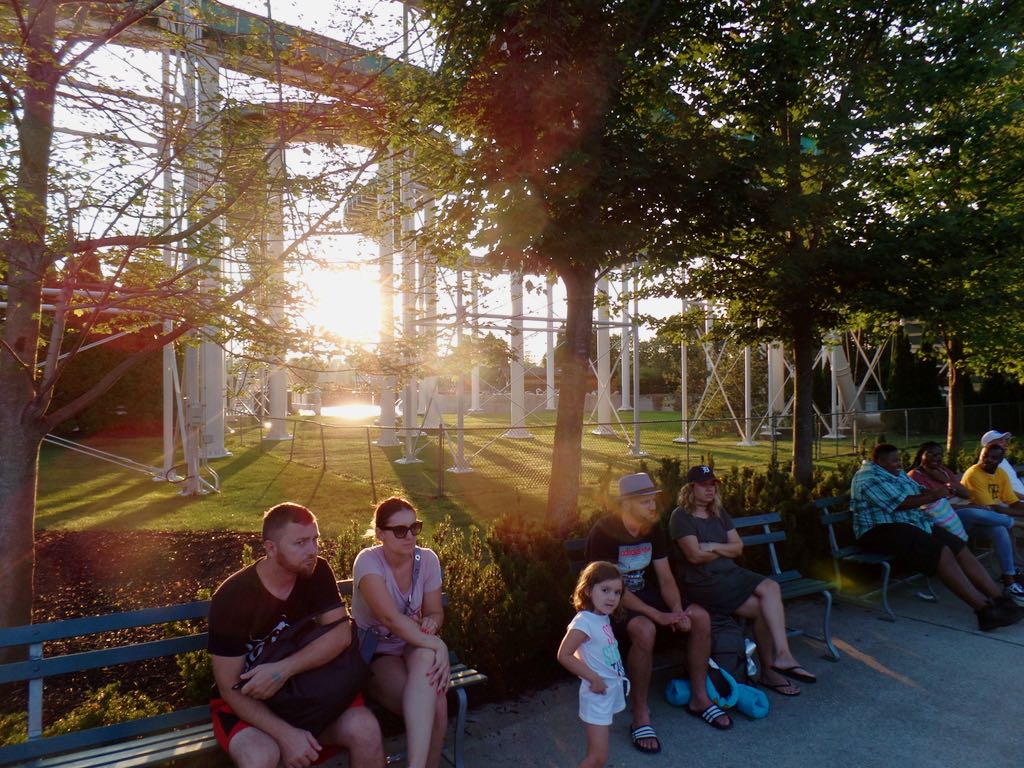 So here's joy returning to the world through the Logger's Run log flume.