And the only explanation I can find

We drove north and east, along the edge of the Keweenaw Peninsula, to rejoin US Route 41. And to leave Route 41 at one of those strange, loosely magical places: the end of the highway. US 41 reaches the town of Copper Harbor, and then for some reason goes a few miles farther along, ending at a small loop. Attached to the loop are some small, seasonal roads for the timber companies. This was as close as we got to the Keweenaw Rocket Range, it turned out. But we weren't there for that. We were there to be at the end of a big highway.

There's attractions there. A lovely sign, wooden with hand-painted text on it, and a map of US 41's path down, ultimately to Miami. It's on a nice wooden frame embedded in a stone-wall base. Connected to the sign is another sign explaining that this is the Byron Muljo Memorial Sign. It explains how Muljo was the road commissioner and maintenance foreman and plow driver and sign foreman. The commemorative sign at the end of US 41 would be nice enough, but that it has a sign commemorating the commemorative sign elevates it so. While we were there several cars departed, and others came. One was a big RV, and the people from it went around the trees, picking berries we guessed.

And we were there to find a letterbox. Right away, at the Byron Muljo Memorial Sign, I found something! A painted blue rock, nestled in a crack between the sign's base rocks. I'd find another one too. These don't seem to have been connected to anything, the way that unicorn rock at the mermaids-and-magical-creatures show at the Grand Rapids Public Museum was. These seem to have just been someone having fun with the noteworthy spot. If there wasn't a geocache nearby I'll buy a hat and eat it.

But there was absolutely a letterbox there. And one

bunny_hugger knew well. An ancient one, too. The Highway 41 Letterbox was first planted the 10th of July, 2003. Letterboxes never last that long. But this one has. And, even more astounding, its logs have survived fifteen winters and all the elements of the Keweenaw Peninsula. And the box had all three of the log books. These are small things, spiral-bound pocket notebooks like you get three for 79 cents at the stationery story. And they've taken light damage with age. But they were intact and nearly all legible. We added our stamps to log book number three. And then we both went to work photographing the pages of the books, as archival protection in case something terrible happens to the venerable letterbox.

bunny_hugger's old stamp, and her then-initials. She had found this letterbox --- already, then, a survivor at three years of age --- the last time she visited the upper peninsula, with her starter husband. The same logbook she had held then. Her starter husband's imprint, made with a stamp he left behind with her. We do all kinds of things that bind moments in time together and it's heady to touch them.

We restored the letterbox to its proper spot. And did some touring of the area, regretting that some spoilsport at the highway commission had taken down the 'Miami Fla 1990' sign at the turnaround. (Not so, apparently; it's just at the limits of Copper Harbor, suggesting that either the whole highway is more than 1990 miles or that it rounded off at Copper Harbor.)

Feeling triumphant we wanted to go find another letterbox that

bunny_hugger had found described in the area. But the directions to it were more elliptical; speaking, for example, to ``go where the old people go''. Well, that must mean follow US 41 toward Miami. But then the descriptions about finding bridges and parks and such didn't match anything that we could find, and we had to admit defeat on that one.

We did stop at a state park that offered a great view, across a bay, of the Copper Harbor Lighthouse, though. And a spread of the extremely rocky beach of the bay. And that also offered the hint of a third letterbox which also defeated us. We were pretty confident about having found the right part of the trail. But then the directions to go into the woods lead us to nowhere particular. If there was a letterbox we couldn't find any reason to find it in one spot rather than another. Worse, the search cost us:

bunny_hugger lost a lens cap while tromping around the woods, and that was impossible to find.

One more letterbox to try, as we drove back. I'm going to say this was in the town of L'Anse, but if it wasn't, never mind. It was somewhere at least as good. This took us on to an RV trail, walking along a dirt road with warnings about what to do in the snowmobile season. Here again we were foiled by the directions. They told us to look for some stop signs, and we could find them. But the next step didn't seem to match the terrain. Unless we were willing to take ten paces mostly up into dense brush we couldn't find the letterbox, and we didn't. Our record was then one located letterbox for four attempted. Three attempted, if you don't count the ``where the old people go'' box, since we never even got out of the car for that one. Not an awful record, honestly, given the difficulty of finding letterboxes. And besides, that one success --- well, that was a fantastic success.

We drove back to Houghton, hoping to get dinner. But we were in town around 9:30, by which time everything was closing up or trying to. Rather than go to Taco Bell again, we went to a supermarket that turned out to be 24-hours. We figured we could get a dinner plus supplies to make a picnic lunch. We were foiled in getting a ready-to-eat meal since the deli counter was closed and they hadn't left any prepared sandwiches that didn't have meat in them. And I did my part in foiling things by saying I was not sure that we had a microwave in our basement suite. We did, it turned out, but I couldn't remember seeing one and as soon as I expressed doubts

bunny_hugger wasn't sure. So we ended up getting stuff to make cold meals, just in case. Also locking sandwich bags, because while we figure we only needed a couple for our own lunches, we could donate them to needy letterboxes. We would over the coming days do a fair bit of replacing torn or tired-looking plastic bags with fresh ones, hopefully keeping log books safe.

PS: My 2018 Mathematics A To Z: Commutative, or me trying to say something about a word that describes something so common it seems like it should be boring.

PPS: Getting into Kings Island! 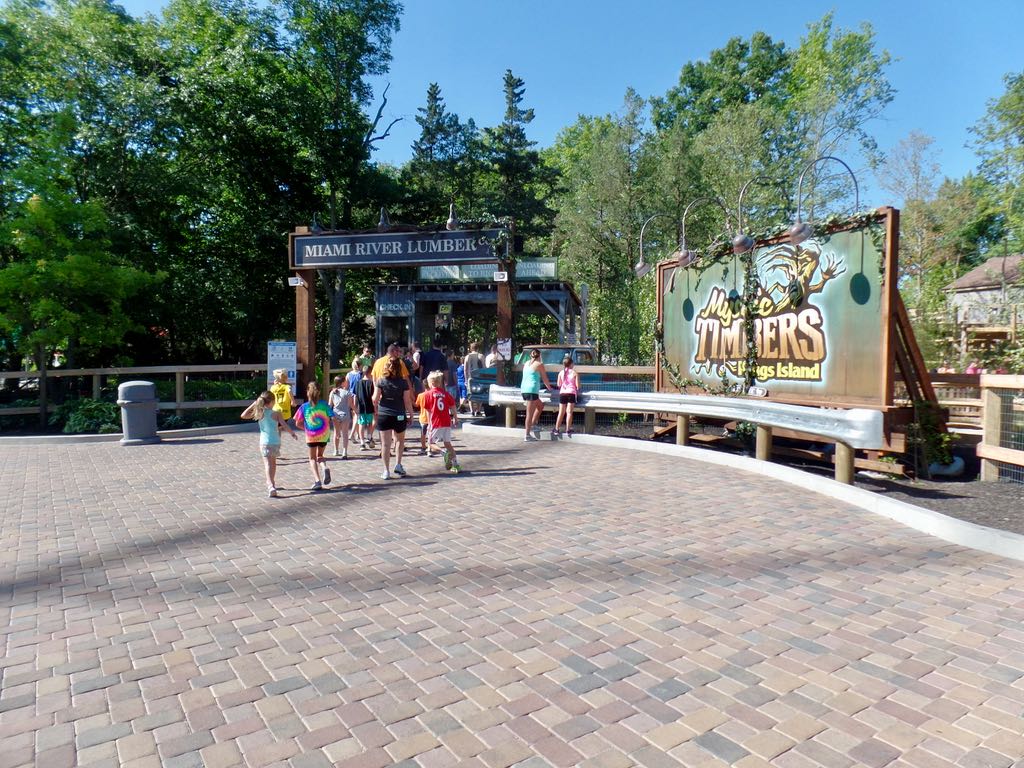 First goal of the day: getting to Mystic Timbers, their newly-in-2017-opened wooden roller coaster. The area's theme is that it's at the site of the haunted Miami River Lumber Company's former working camp. 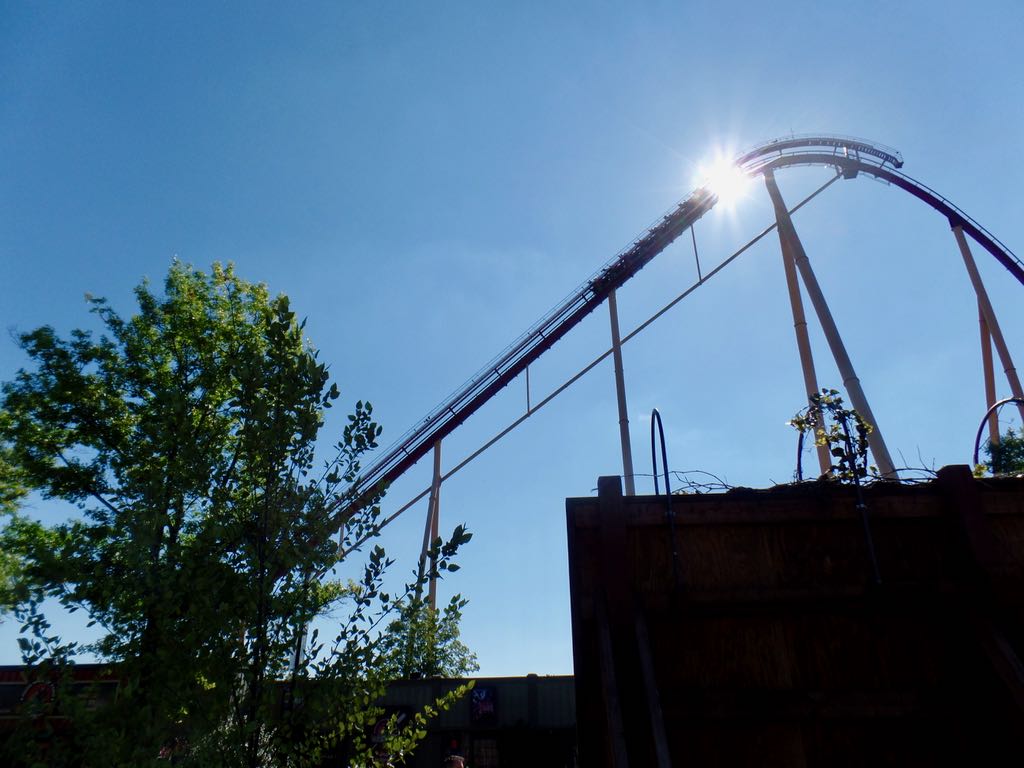 View of the Diamondback roller coaster train ascending the lift hill to be eaten by the sun. 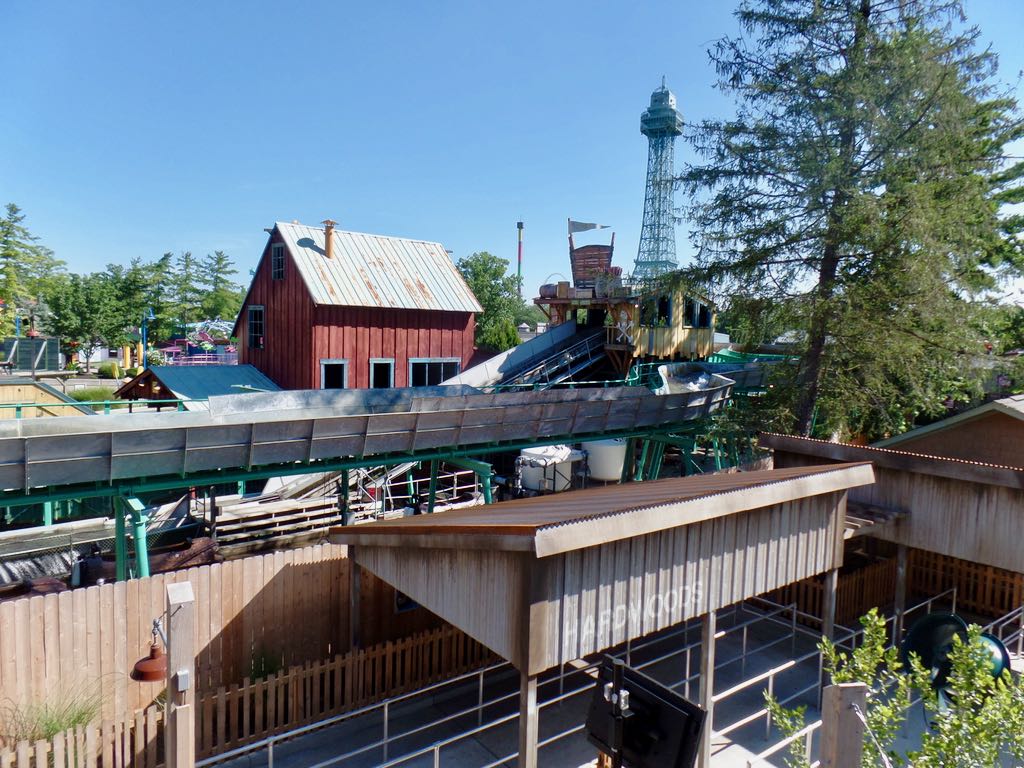 View of the not-yet-busy queue at Mystic Timbers, and the log flume ride and, of course, Eiffel Tower in the distance.