Hell's bells, ringing in my ear

Friday the 17th opened with e-mail from work. I had warned them I'd be away and only able to handle emergencies. There was kind of one. One of my work projects uses Google Maps aerial photography. Google Maps hasn't really supported this kind of use for a couple years, but they hadn't turned it off either. That Friday, they turned it off. I wrote back to work explaining that I was on vacation as warned, and that this was something I'd warned them Google Maps might do, and that I'd deal with it next week. Next week Google Maps turned it on again, and I couldn't get work to do the server stuff we'd need for a real substitute. The matter went fallow again until last week, when Google Maps turned the thing off again, but I haven't seen any progress on the substitute we really need.

Anyway, that all dealt with, we went into Houghton for breakfast. Specifically to the Suomi Restaurant, which has been there just forever, and which offers a Finnish breakfast. We were there for the pancakes. Also incidentally for the vintage pictures of the Houghton and Hancock area that decorate the walls. Many of them are self-explanatory, particularly, streets buried under cartoonishly great heaps of snow. (Given the steep hills of the area we've wondered how anyone gets their cars back home in winter.

bunny_hugger's joking best guess is they just let them all slide downhill and collect them back during the spring thaw, in mid-July.) Other pictures are more mysterious, such as ones that tease at we think the inter-urban trolley line that we infer ran along the peninsula. At least if we're reading the ambiguous signs correctly and are making any sense of the clocks. We're not sure about it.

After lunch we went back north, to the Quincy Mine. This is (now) part of the Keweenaw National Historical Park. But for roughly a century the Quincy Mining Company worked this area, digging shafts as much as a mile down and nine thousand feet long into the earth. Mining stopped, really, in 1930, but resumed during the buildup for World War II, and ended right after when federal subsidies ended. Things staggered on mostly on reclaimed copper for a few decades, but the facilities were basically abandoned and left to rot for decades. Then they became history, and tourists began going to them. In the 1970s Michigan Tech used the mines to teach engineering students their expected trade. They even had a classroom inside the Number 2 mine shaft. There were a handful of things that

bunny_hugger was sure we just had to do while on this tour, and a mine trip was one of them. She'd been down it before. I hadn't, but was eager to see.

We drove to the mine and entered the front building/gift shop, there to buy tickets. Also to overhear people who were very upset that the 2:30 (or whatever it was) mine tour had left without them, because they hadn't understood that they needed to be at the 1893 Hoist House building by 2:20. We had gotten the equivalent warning when we bought our 3:00 mine tour tickets. The gift shop/ticket sales clerk made some phone call, which kept the couple from storming off quite yet. Also I discovered that since this was a National Historical Park they had the stamp for the National Parks Passport. I have one, and have for a couple years now, but we never get to National Parks to stamp them. (They're short on the ground in Michigan.) I hadn't brought my Parks Passport, but they had slips of paper to stamp and paste into the book. National Parks Passport stamps aren't as varied or interesting as Lighthouse Passport stamps. Lighthouse Stamps are designed by whatever society protects the participating lighthouse, and so reflect the quirks and tastes of the local group. The National Parks stamps are just a simple circle, naming the park, with the date in the center. Still, good to have that revived too.

We spent a little of the half-hour before our mine tour in the rockhouse, the several-storeys-tall building into which mined ore would come up. And which, in olden times, people would go down, riding a car that looks a good deal like an unsafe roller coaster car down the track. Well, it looks like a series of steps; just, you sit on these steps with people behind and in front of you, and keep your arms close and hope the rope doesn't break. When it wasn't helping change the shifts, it just hauled up loads of ore that would get dumped into vast pits and get chopped up. One pit was plainly titled the 'Poor Rock Dump', for the ore that nobody had much hope for, but that they had enough of.

After maybe fifteen minutes we went to the Hoist House, to make sure we didn't miss our tour. They checked our tickets and had us sign waivers that we, at least, actually read. They specified that we had to wear hard hats. We didn't have to wear jackets, but they recommended it, and we did, since it seemed wise to do anything the people who worked there every day recommended. We waited around the Hoist House, which included bunches of equipment and panels explaining, for example, the old company school (including the chipped remains of the school sign) and marvelled at a replica of the school's June 1917 Honor List. This praised students for just the achievement of not being absent or tardy, for periods from five months to a year to, for one student, six years. And marvelled at some of the 1917 names, featuring people with now-obsolete names like Marion and Hilga and Elmer. The six-year honor student was named Lester Hoar. Someone on the two-year list was named Tuna Kangas. We'd recognize some of these names in the names of streets or parks or other things around the area and wondered each time: their family? Or just coincidence? Probably family, given that the entire upper peninsula has never had more than 2500 residents.

Anyway, about 3:00 they made some announcement, and everybody gathered up, and separated into two groups. They led us into an adjacent room, one with the enormous hoist rope on a spool that was, without exaggeration, about forty feet in diameter. We feel confused and ask if this isn't the group going on the mine tour. It's not. Somehow we've missed it.

Trivia: In January 1863 Mississippi banned the distilling of alcohol from grain and molasses. In April 1864 the state extended the ban to distilling from fruits and vegetables. Source: Look Away! A History of the Confederate States of America, William C Davis.

PS: I'm Looking For Some More Topics For My 2018 Mathematics A-To-Z, an open request. 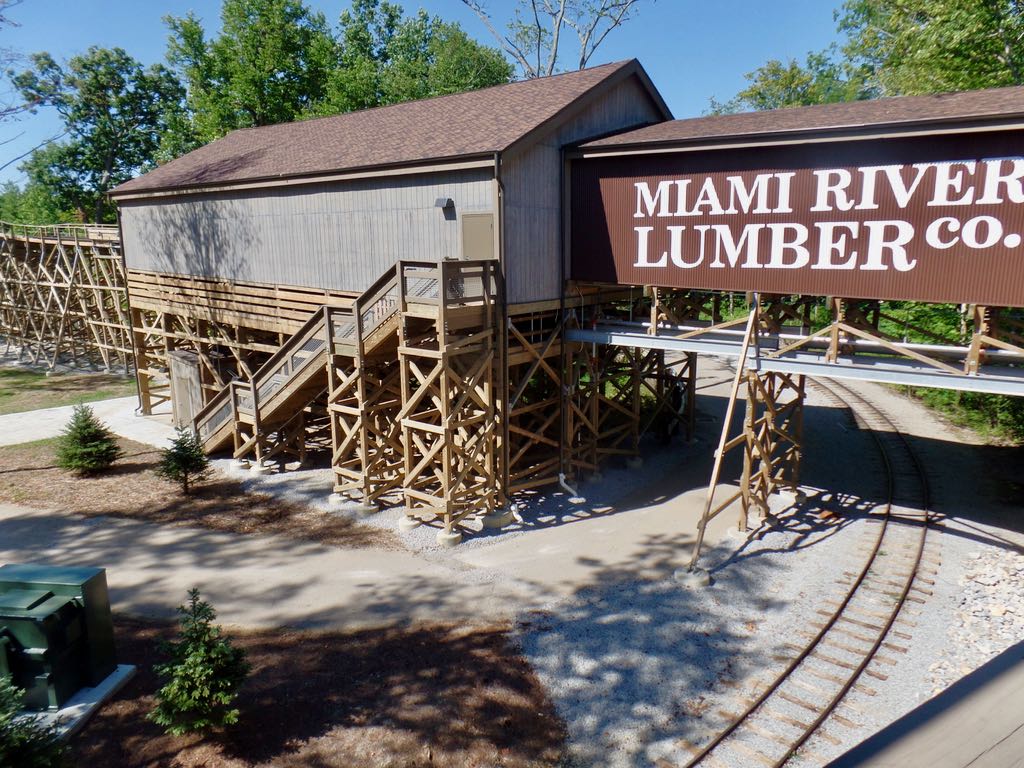 The Shed! Mystic Timbers's advertising asked people to ponder the question, what's in the shed? ... Besides the other roller coaster train waiting for the station to be clear so passengers can unload. 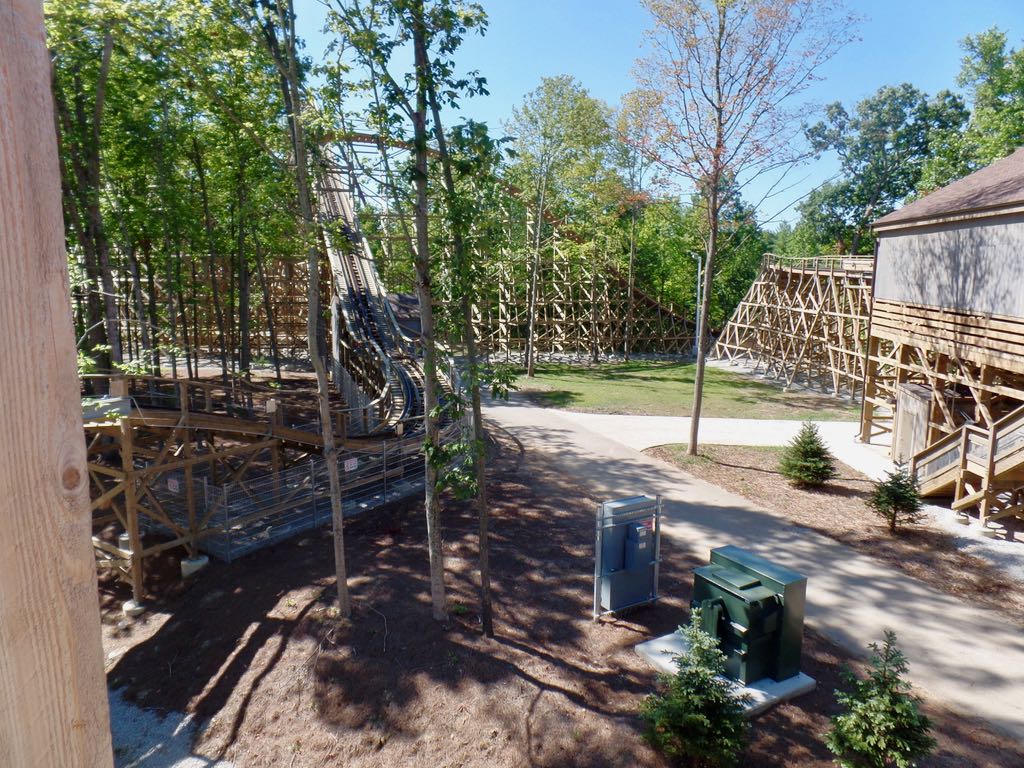 View of Mystic Timbers's lift hill, and The Shed, plus some of the interior layout, still fresh from construction. 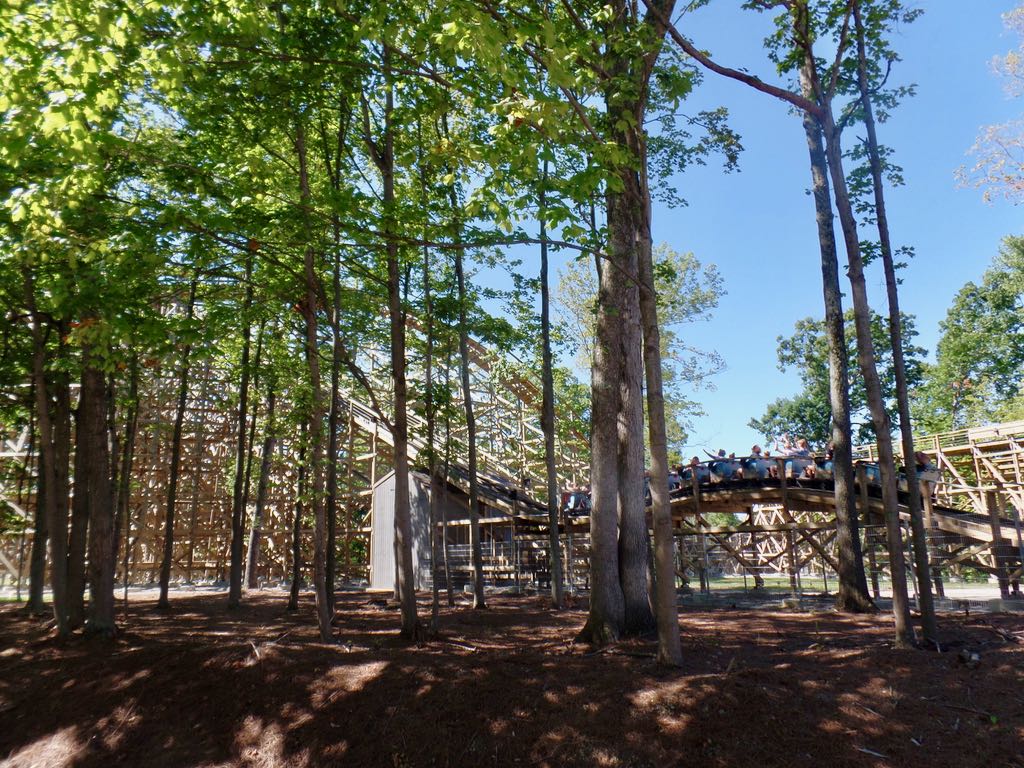 Train of people about to have the thrill of Mystic Timbers, just after we had the smoothest ride we'll ever have on it. There's a little bunny hill out of the station just before the lift hill, and that's what you see here.