Now somebody's got ahold of those bells

There was a letterbox at the Quincy Mine. Or there was the report of one.

bunny_hugger had clues, stored awkwardly on her iPod. Nobody's cared to make a decent scheme for storing web pages for offline viewing. We were confident in the first few clues, set as they were to describing landmarks outside the hoist house. But then they led us to ... either this large abandoned building that was actually taped off with signs warning that it was structurally unsound, or else to a third building in a distant chain that appeared to have only two buildings. Neither seemed credible and we gave up the clues as beyond us. Driving past, later, we saw there was a third building, but we didn't take the time to follow that possibility.

We drove to Calumet, like the guy in the mine wanted to have been a state capital. There was a letterbox for George ``Gipper'' Gipp, at a cemetery we weren't able to locate. While searching for it --- I guessed, well, let's follow the church steeples --- we ran across the thing anyone might have heard of Calumet for. You know the phrase about the limits of free speech, that ``you're not allowed to shout 'fire' in a crowded theater''? That has at least one specific reference. That would be the Italian Hall tragedy of Calumet. In 1913 mine owners were attacking the workers. After five months of a strike, many of the mine workers and their families gathered at the Italian Mutual Benefit Society (not a theater, although it did have a stage) for a Christmas Eve party. During this, some party never known to the law started the false claim there was a fire. In the panic 73 people, many of them children, died.

The Hall isn't there any longer. It was torn down in 1984, although the archway was preserved. Five years later it was made part of a proper small park, along with historical plaques that largely explain the thing. Possibly unexplained: the plaques mention how the party was held in the second floor of the building, and that the first floor was occupied by a saloon and an Atlantic and Pacific Tea Company store. A&P receded from Michigan decades ago; might they need to explain now that this was not a tea shop but rather a grocery? (If they need to explain the first floor at all.)

The park's just the archway, and a brick-lined loop and cross behind, with a pillar in the middle listing the dead, and their ages. It's bare, but that's the only way to imagine understanding something like how many families had three children killed on Christmas Eve. Gads.

But we gave up on the graveyard as just nowhere we could find without specific directions. (The satellite navigator didn't list graveyards in the area, or we couldn't think how to get it to admit that it did.) We had other letterboxes. One was supposed to be in a roadside park memorializing veterans, although it hadn't been reported found in a couple years. We could find the park easily enough. And the letterbox almost easier. The last stamp in it was dated two years and one day before our trip, another weird almost-anniversary. The box was also in peril, too. We donated a logbook to it, and some fresh plastic bags, and felt ourselves pretty clever for having bought those sandwich bags at the supermarket.

Another letterbox, and one that would be harder to find. This promised to be at a public park with a distinctive landmark: a 1930s, WPA-project-type statue replica of a battleship, made of local rocks cemented together. You can see why that's the sort of distinctive, unique marker that people can't help noticing. We got to that park and crawled over the strange unseaworthy boat. Then over to the purposed location of a letterbox not found in years. It was supposed to be beside a similar stone replica of the US Shield. (You know, that thing that US highway route signs approximate.) We found it, an enormous, color-faded thing overgrown with plants and with a shape disappearing to the ages. We never found the letterbox, either.

Now we were getting near sunset, and the threat of places to eat closing. We drove back to Houghton. There's a place named The Library Restaurant and Brew Pub. Campus legend,

bunny_hugger was told by then-friend years ago, had it the place was named The Library so that students could honestly tell their professors where they spent the night. Perhaps. It's got that converted-warehouse look to it. Also several vegetarian dinner choices, which you forget is amazing until you remember that in 1998 this city didn't have a Taco Bell. The place also has small heaps of books around the booths and tables. We had some fine time reading through an early-60s Michigan Tech yearbook (``everybody in it looks like they work for the Space Task Group'', I observed) or a Reader's Digest set of condensed books. We didn't recognize any of the titles, which made it more silly when we realized one of them was Peter Benchley's Beast. Which, yeah, we never read but at least heard about. That the books were fairly recent got us wondering how long Reader's Digest Condensed Books kept being made. It turns out that the series by that name ended in 1997, but if you accept the Reader's Digest Select Editions as the same thing under a new name, they're still going on. At least as of 2017, per Wikipedia.

After dinner, the sun had set. We walked along the river/canal side, admiring the lights and the water and, for my part, discovering that my camera has a low-light mode that, at least when it works, makes incredibly good night photographs. This could destroy me yet. We also admired the drawbridge back to Hancock, which we never saw drawn while we were there. Probably shouldn't expect it to be --- for all the time I drove through Belmar I only saw its drawbridge open maybe twice --- but still.

It was getting near 11 pm, so we drove back to our rented home. We prepared best we could to meet our AirBnB hosts, living in the above-ground floors, after the slightly awkward moment of not having seen them our first two days there. But we didn't see them, once more; I suppose they were already in bed. We got in and went downstairs as quiet as we could, and talked out options about what to do the next day, Saturday.

Trivia: Gilbert Stuart's full-length portrait of George Washington was framed and screwed tightly to the wall in the President's House. To save it from approaching British Army soldiers in 1814, Dolley Madison's assistant Paul Jennings hit the frame with an axe once. Fearing permanent damange to the body of the picture, doorkeeper Jean-Pierre Sioussat sawed the portrait out of the frame using his penknife. Source: Washington Burning: How a Frenchman's Vision for Our Nation's Capital Survived Congress, the Founding Fathers, and the Invading British Army, Les Standiford.

PS: Some More Mathematics I've Been Reading, 6 October 2018 and the mystery of why I didn't include them in the Playful Mathematics Education Blog Carnival.

PPS: Kings Island, after our early ride on The Beast. 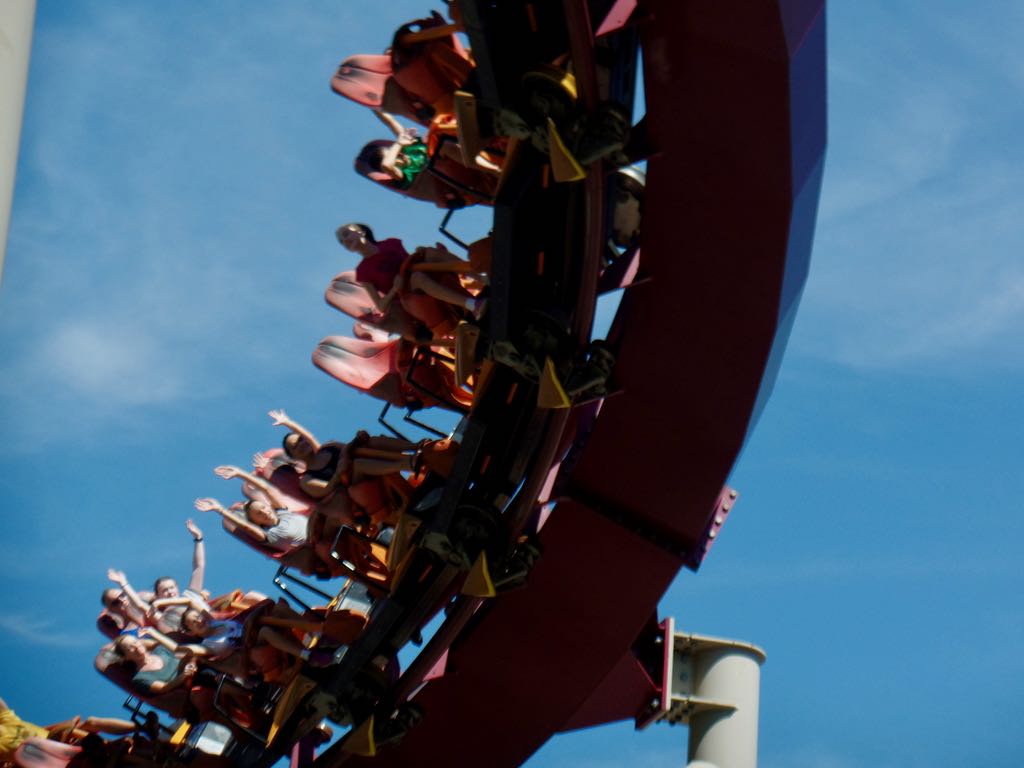 Action shot of a roller coaster --- I think it's Diamondback --- that looks like it's already on the park's advertising flyer announcing the debut season of Diamondback. 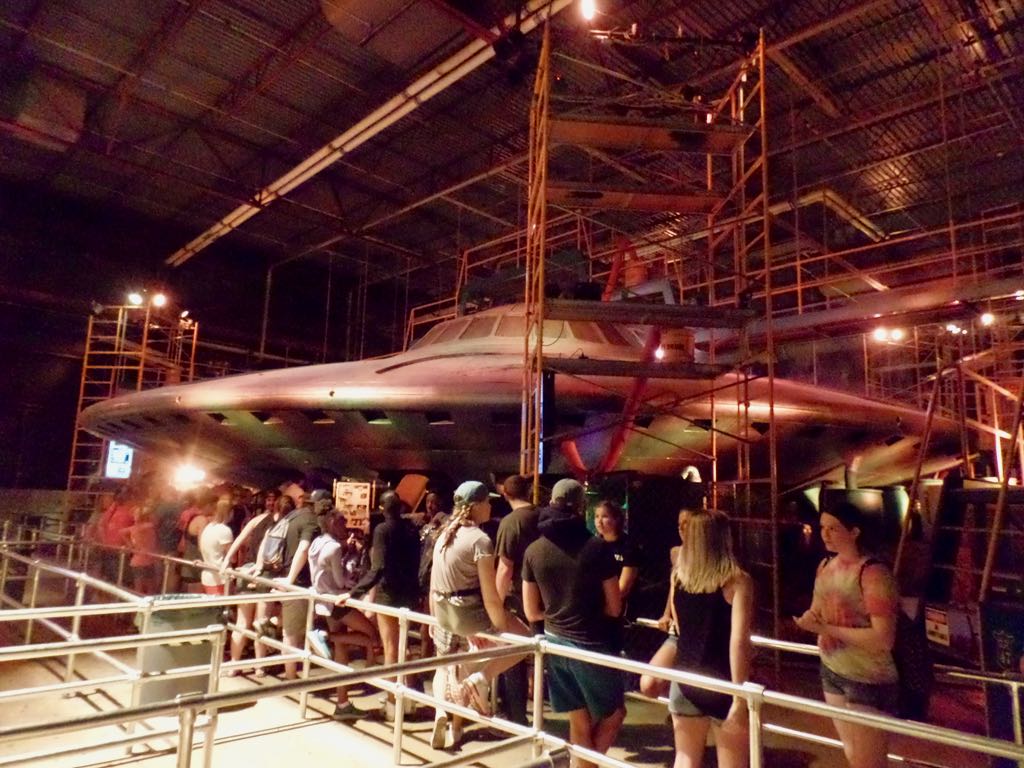 Part of the queue for the Flight of Fear ride (formerly Outer Limits: Flight of Fear). The theme to this indoor linear-induction-launched roller coaster is that it's the secret warehouse where the government is keeping ... well, it's right there, isn't it? 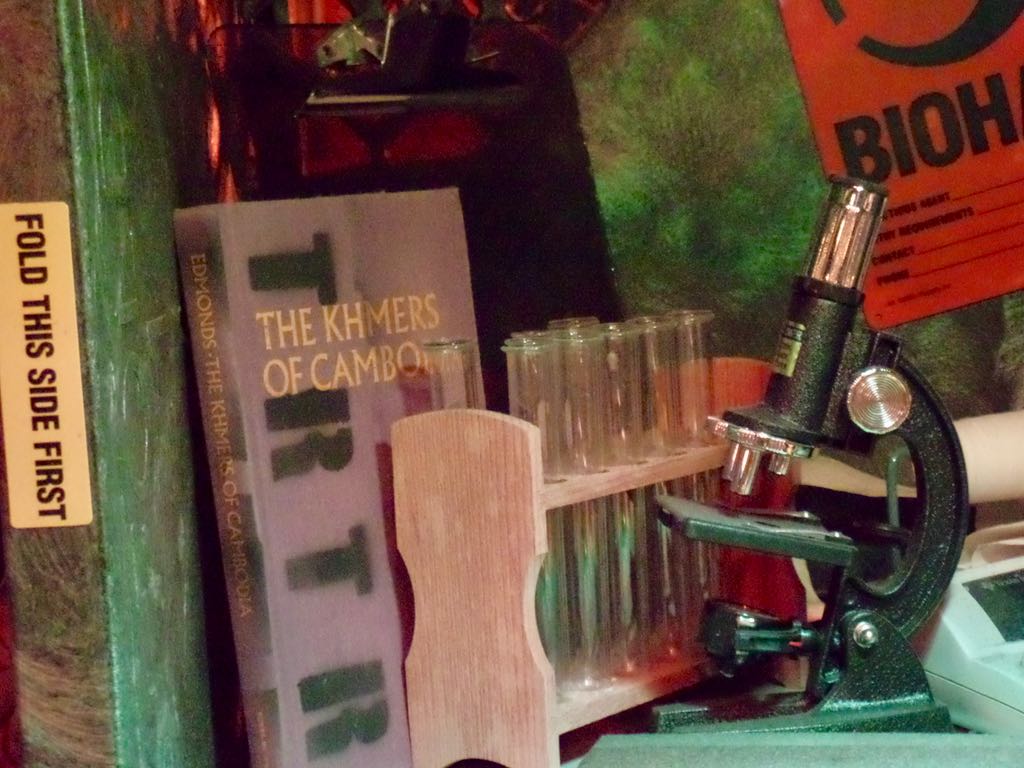 Books and equipment and stuff as part of the Flight of Fear scenery. Most of the books are science references. I like that here, apparently, we're just to take that one of the sciencey types has interests besides dissecting aliens. I imagine it really reflects that they just grabbed a bunch of books at the library sale to use as props, but an accident like this imbues personality into the whole thing.