Oh sweet city of my dreams

Sunday; our last full day up north. We missed our AirBnB hosts again, setting out. We would go way away from Copper Harbor this time.

bunny_hugger wanted me to see some of how the copper-mining industry had changed the geography of the upper peninsula. This would take us to the eastern side of the Keweenaw Peninsula.

This took us along the rim of Torch Lake, which I've heard about for years. It's the site of Quincy Dredge Number Two. Getting copper out of upper-peninsula ore was done by stamp mils, smashing rock with sand to extract the metal. The leftover stamp sand got dumped (here) into Torch Lake. Occasionally, the price of copper rose enough that it was worth extracting what was left in this sand. And so came the Quincy Dredges, which hauled up exhausted sand to exhaust it some more, to the point that even now copper is not worth enough to bother swiping molecules from the silica. Dredge Number One was lost decades ago, probably to arson. Number Two remains, looking like a railroad switching station had become part alligator. Years and years ago

bunny_hugger's starter husband and our Michigan Tech then-friend had even gone into the control room, reporting it to be at a severe angle and covered with graffiti.

The dredge is fenced off now, waiting its final collapse or redevelopment as a historical site. The Torch Lake stamp-sand beach itself covered in grass as environmental remediation. Which is good for it, certainly, but makes it less of an alien visit. So while we drove past it --- and I was driving, so I got only a brief clear view of it --- we were going past, to the town of Gay. You know, like you see in people making snickering pictures about street signs. It was built for the Mohawk Mining Company. It was named for company founder Joseph E Gay.

The mining company built a stamp mill. Its smokestack stands still. Bits of the rest of the factory, mostly great concrete slabs, also survive. It's not much, and it's collapsing under the plantlife. There are a lot of holes in the concrete, and through the rebar, to underground pits filled with rocks and rubbish. There are other areas that clearly used to be basements or storage areas and whose structure has survived, to date, intact. It has to be endlessly fascinating to kids in the area. While we were there, a grandmother-class woman and two kids were also prowling over the factory remains, the elder talking about her experiences as a kid being there. Many pieces of the onetime factory are marked off by orange plastic tags, or fences, or netting. Other parts are just weirdly flat patches with struggling trees or tall grasses.

And then there's the beach, where the stamp sand was left. It's a dark grey.

bunny_hugger had warned me it was like a moonscape. But that's just in its alienness. It's weirdly flat. It's uniform. The sand used to smash copper out of rock needs, by design, grains of a pretty uniform size, and the exhausted sand retains that. Its texture is more like a pile of decorative rocks from a garden store, but too tiny to be decorative. It spreads out along the water's edge, far as we could see. And then in a couple spots, here and there, we could see grasses or trees that had grown in the midst of a dry, lifeless pebble ``soil'' infused with copper and (probably) arsenic and goodness knows what else seemed chemically feasible before the factory closed in 1932? We asked a patch of grass what it thought it was doing there, and it had no answer.

We found evidence of humans on the beach. Footprints. RV tracks. That grandmother and the kids, wandering around. Some remains of picnics or parties. Broken bottles. Some pieces even of sea glass, or at least lake glass. Some of them baffling. Big pieces that seem like they must have been from Mason jars, or at least something that size, but why?

Also on the beach: bugs. We were visited by what sure seem to be flies, some of them literally and without exaggeration more than an inch long. One took a particular interest in us and wouldn't move on, I suppose because what other living things were there to even look at? We'd seen some click-y clatter-y bugs before, at the stamp-sand factory ruins and at the bluff the day before, but this was weird.

From the beach we walked back to town. A couple homeowners had put up stuff salvaged from the waters in their yards (``Shipwreck planking and anchor chain found in the lake bottom from Captain Wolf Larson's Ship, The Ghost''). One put up a prank sign (``On this site in 1897 NOTHING HAPPENED'', which has a sibling in Marvin's Marvellous Mechanical Museum). There was a township historical museum, which we didn't go into. Also a little picnic pavilion with wood-carved animals or icons of local organizations in the support pillars.

And then to eat, at the inevitably named Gay Bar. Yeah, they have merchandise, including T-shirts, but we refrained. It's got that bar-for-locals atmosphere to it, but accepts that a fair number of tourists are going to stop in to get something to snicker at. We got plates of fried matter (cheese, potatoes, mushrooms) and some pop. And found pinball.

The back room had two machines. Bally's Game Show and Terminator 2. Terminator 2, based on the movie, was a breakthrough machine when it came out; it pioneered this combo-heavy style that's still with pinball design. The Gay Bar's machine worked more or less fine, except that the display didn't work. So we could play a decent enough game, and got lucky enough not to face video mode. But we couldn't tell who had the better score. Also the volume was turned up to RATTLE THE BAR TO THE GROUND levels. We were embarrassed by how loud our playing was, especially as group of eight or so people tried to sit down to lunch in the back room.

Game Show had a perfectly functional (LED) display. And a reasonable volume. Its problem: too many pinballs. The game, like many late-80s tables, has a two-ball multiball mode. There was a third ball in the game. We discovered this when I was playing and suddenly a second ball came unstuck from behind the ramp or somewhere. My hypothesis is that a ball got stuck, and whoever serviced the game worked out that the game reported it couldn't find a pinball, and they fixed that by putting another in the game. But then the game had three balls, and didn't know what to do with more than two. What it did do: put two balls into the shooter lane, and end anyone's turn when one ball drained. Our workaround: when our turn came, plunge the one ball in the plunger lane before a fresh ball could be kicked out, and leave the surplus ball in the plunger lane. It's not good, but it's at least playable. And it is a fun game; I'd had a great round of it at Pinburgh, for example, and got to share its strategy with

So, a stamp-sand beach. A heavily batter-dipped and fried late lunch. Some pinball. This was a good start to the day.

Trivia: Copper can be extracted from mine spoil heaps by microbes such as Thiobacillus ferrooxidans, which break down iron (II) sulfide and oxidize the iron, which can then oxidize the iron to soluble copper (II) ions. Source: Nature's Building Blocks: An A-Z Guide to the Elements, John Emsley. 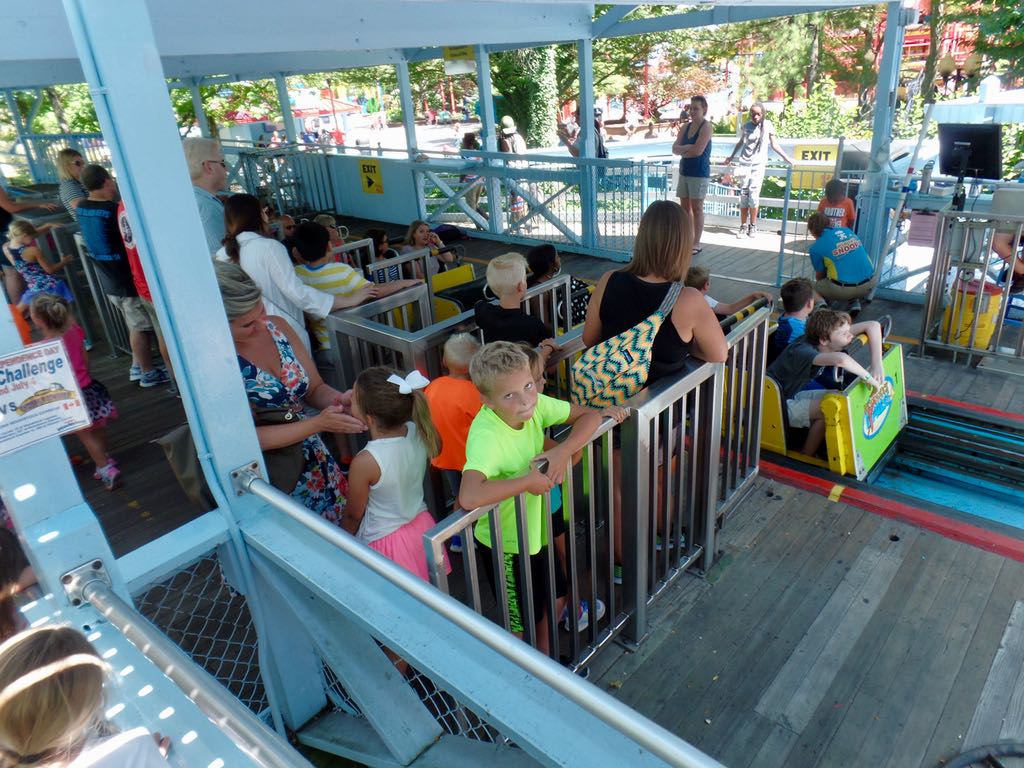 Loading station at Woodstock Express. On the left you might notice the sign about the Canada Day/Independence Day Junior PTC Challenge. This was apparently a contest between Kings Island's Woodstock Express and the Canada's Wonderland Peanuts Ghoster Coaster to see, over the long weekend, which train would have more ride cycles, hourly ridership, and total cycles. Woodstock Express won all those three things. They maybe competed on other measures whose victory was reported at the Canadian sister park. Anyway, kid in the T-shirt the same day-glow green as the roller coaster car is not impressed. 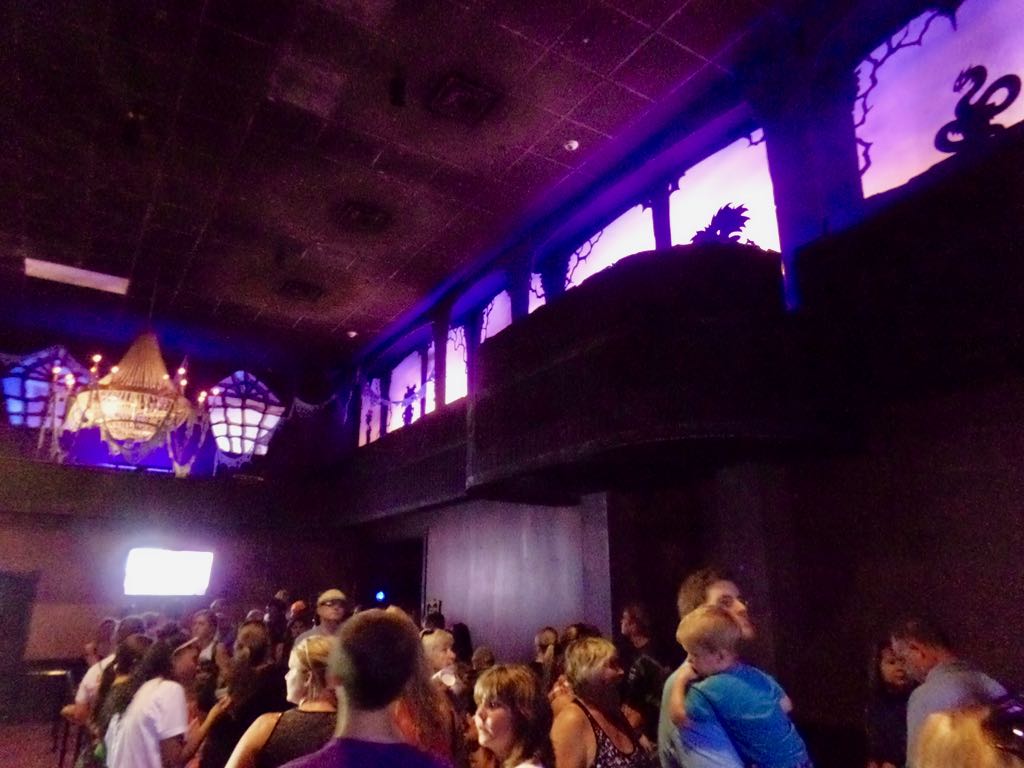 Entrance hall for the Boo Blasters interactive dark ride, one of the handful of indoor attractions and one that's doing its best to keep to a haunted-place theme. 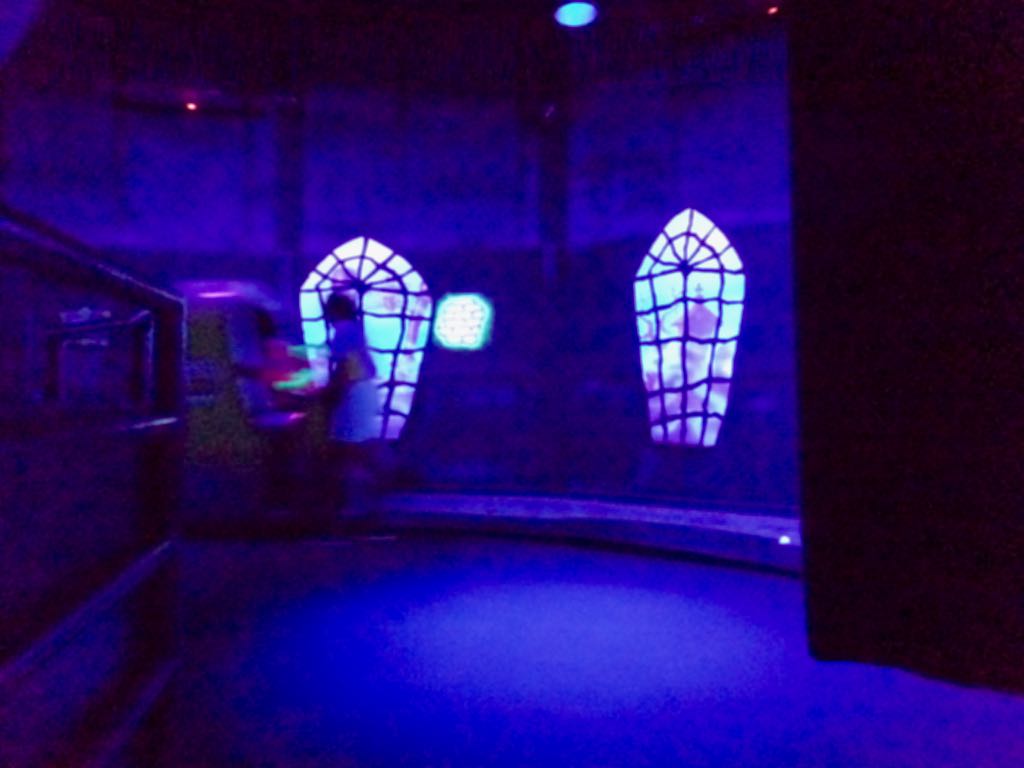 Organ player and haunted windows inside the Boo Blasters building. I just love weird-light problems like this for my camera.