Of speed and skill and schemes

After having our fill of pinball and fried matter we drove back to Lake Linden. This is a small town near Torch Lake, and several other lakes, and a turn-off for Gay that I had gotten wrong about two times over while driving out there. It was a Sunday so was already late enough in the day that Lindell's Chocolate Shoppe was closed. This we particularly felt we'd missed out on, since we had found photographs, including at the Suomi Restaurant, showing it as your old-style pharmacy, complete with soda counter, and going back a century now. Their sign said they were established 1918, and to go to a business that's been going a century and is still doing recognizably the same sort of thing? Would be extraordinary, but stuff is closed Sundays.

This was our sojourn in Lake Lindell in the mid-afternoon that Sunday: finding lovely, century-old buildings that teased interesting or just old-fashioned things (``Lake Pharmacy: Drugs, Sundries, Films, Cosmetics, Stationery'') and seeing they were closed. Some for the day, some for the decade. Lakes Motel (``Modern Units, COLOR Cable ... TV''). Speed Queen Washers - Dryers. Gilles Apartments, in a building established 1906. Dave's Home Improvement Center, which we speculated might be what's become of Reasonable Dave, whose classified ad for lawn-mowing and snow-shoveling services finally disappeared from the local alt-weekly. Quality Hardware. A poster for a three-months-gone roller derby contest. A fellow on a scaffold quietly chipping away at ancient green paint on an older-still building. A bar that had a classic old-style safe, maybe a cube yard in size, on the sidewalk in front of it. The former-Catholic-school that's now the Little Gem Theatre. I hope it paints a picture for you.

So near Lake Linden ... oh, there's nothing near it. But kind of near-ish it, and out into the Keweenaw Bay, is Rabbit Island. Not the famous and ambiguous Rabbit Island, but still, a place called that. There was no way to get there, but we could at least look, right? This sounded like a great idea, and it was, right up to the point that (a) my satellite navigator had the idea we wanted to go into Lake Superior, including a trail that lead into water, and (b) the nearest approach we could get took us off the major road and off the minor road and to the gravel road with chips of rock that flew eagerly around and then to a grassy and dirt road with small houses and residents looking suspiciously at what the heck we were doing there, and finally a road that the satellite navigator said was there and which wasn't anything, even a social trail in the grass, well off Rabbit Bay Road and looking at Rabbit Island. We couldn't see it well, and didn't feel even courageous enough to get out of the car since there were people's houses there. But there was, on the other side of the car, a rabbit! A real regular civilian Eastern cottontail, grazing the lawn and considering what to do with a pile of logs. So we let it have some time to itself, and then went back past the houses with people suspecting our intentions and back along the gravel drive and all that.

(Along the way there we did try to find a letterbox. We failed, though, so completely we never got out of the car. We followed a gravel road but never found the spot to turn off that the clues suggested we should do, so decided we had put enough time into that project.)

White City Park, on the Keweenaw Bay, was for a dozen years an amusement park a century ago. It had a roller coaster, named, as was the custom of the time, ``Coaster''. The park closed in 1919. The coaster opened in 1907 or maybe later. The coaster closed no later than 1919. It's now a public park, as often happened to onetime amusement parks. We didn't imagine that we would see any remains of the park; even the wooden roller coaster foundations would surely be obscured, if at all present. But it was still a park, and a beach, and a place we would take a picnic and have what we supposed to be our last evening in the upper peninsula.

The park was pretty well-crowded, active in the way a nice park on a pleasant Sunday afternoon in mid-August will be. Parking was haphazard and spilled over grass embankments. One group was blasting Kiss out of their van. We walked around the grounds, particularly along the concrete causeway leading out to the Keweenaw Waterway Lower Entrance Light, a little stand with small signs on it warning of hearing damage if you're within 50 feet of when the foghorn goes off. Might put a sign about that on land too. People were fishing off the thin causeway there. Some swimming. We saw through the clear water someone's lone flip-flop, resting at the bottom. And many people boating, recreationally.

We spent some time trying to guess plausible layouts for the amusement park, and where we'd have put a roller coaster. No way to know, mind. The Roller Coaster Database doesn't have pictures, or even height or ride duration information; just the bare facts that it was a figure-eight ride and that it existed no earlier than 1907 and no later than 1919. But even the oldest concrete wharf embankments had dates of 1928 or so. Nothing, so far as we could tell, was from the park's day.

We found a nice spot in the sand, and actual sand in a Lake Superior beach, and set out our chairs and our umbrella and the last of the bread and cheeses and such that we'd bought the second day there. We set foot in the cold water, but didn't go swimming. Did watch people who did, including some who brought a dog who was thrilled to go knocking about playing catch in the water. And we just stayed there, taking in the setting sun and the dwindling crowd and wondering: every season there must be a last person who goes swimming here. Does that person ever know they are, or at least strongly suspect they are?

The light in the lighthouse finally came on, and the beach seemed to be ours alone.

It seemed finally late enough to go back home, and ready to drive the next day. We packed things up and walked around a last bit, wondering what the equivalent Sunday night at this spot would have been a hundred years before. Or what it was 99 years before, the last year of the amusement park.

Well, we stopped for one moment. There was this rock amongst a bunch of trees that seemed suspicious to me, and that I just had to examine more closely. My conclusion: I don't know. It looked weird, but if it had anything special to it, I don't know how to interpret that.

While driving back we had a wildlife encounter. Not a bear.

bunny_hugger had once seen a bear in the Keweenaw Peninsula, and we were ready for a reappearance, but that didn't happen. We did see cranes, though, trotting along the road in the twilight.

We got back to our AirBnB home and wondered if this, at last, would be the time we met our hosts. It was not. We would do as much tidying and as much cleaning up of things as we could, quietly, and getting ready for our check-out on Monday.

Trivia: French aviation pioneer Armand Deperdussin was awarded membership in the Légion d'Honneur, while he was in jail for fraud, embezzlement, and financial manipulation. (He was ultimately convicted, albeit with sentence suspended, in 1917.) Source: Taking Flight: Inventing the Aerial Age from Antiquity through the First World War, Richard P Hallion.

PPS: Some big things to look at at Kings Island. 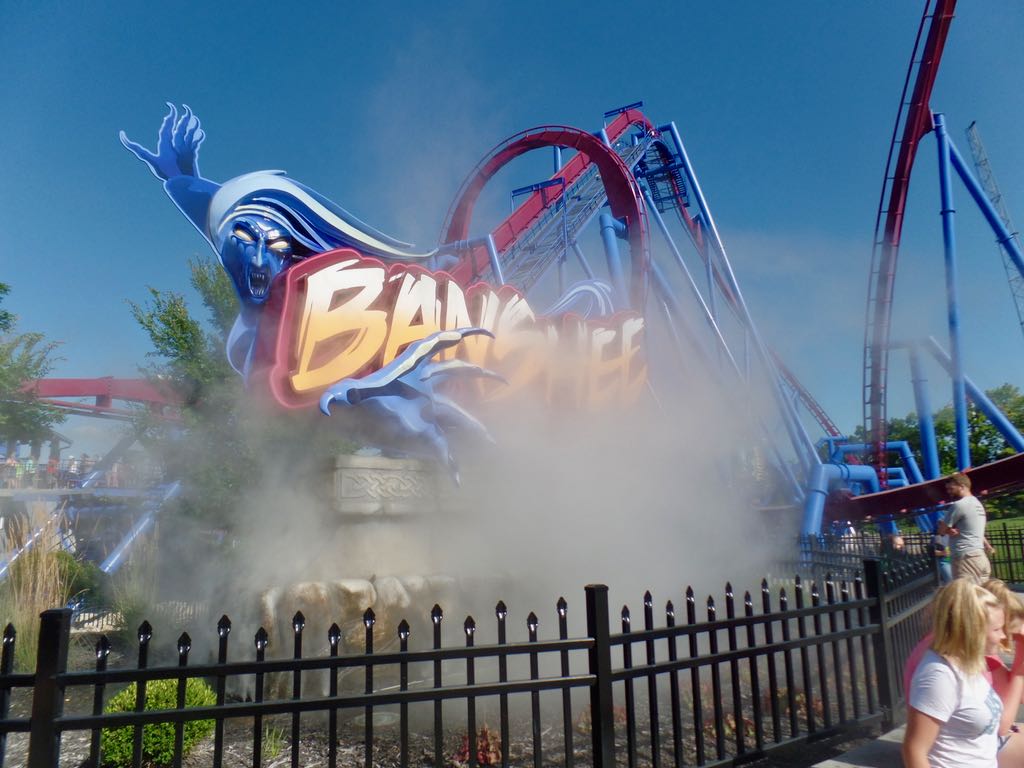 Entrance sign, and lift hill, and fog effects for Banshee. Even if you don't care for the coaster (and I think it's fun), you can't deny it's well-decorated and stylishly designed. 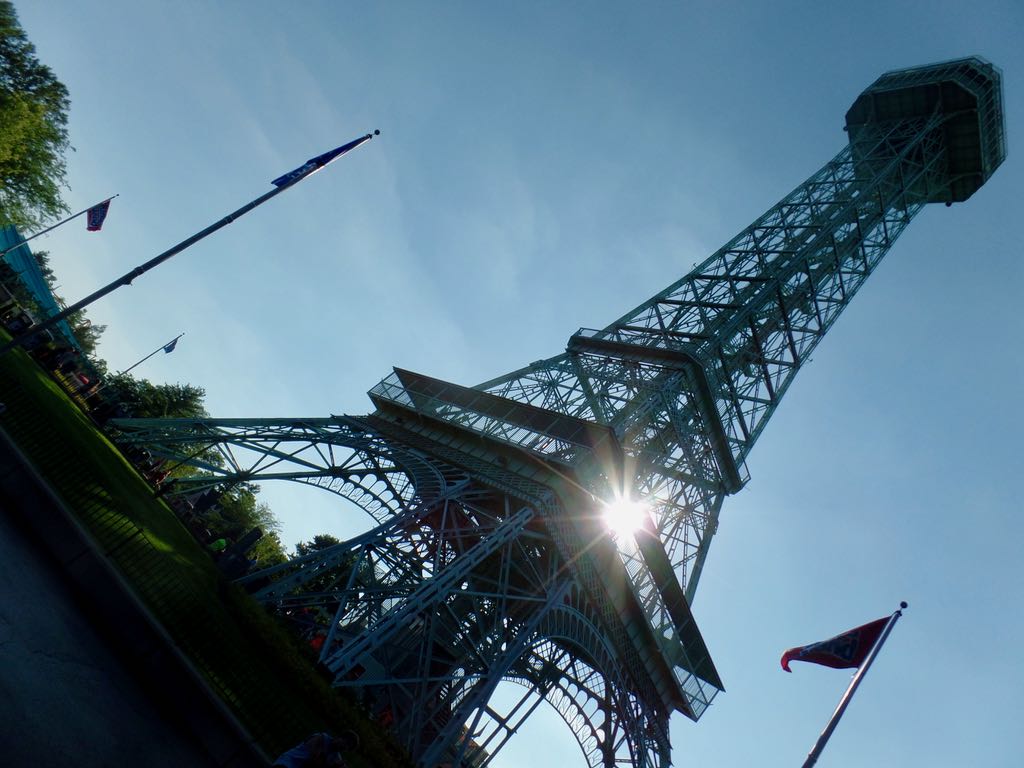 The Eiffel Tower sags in the heat of the evening sun. 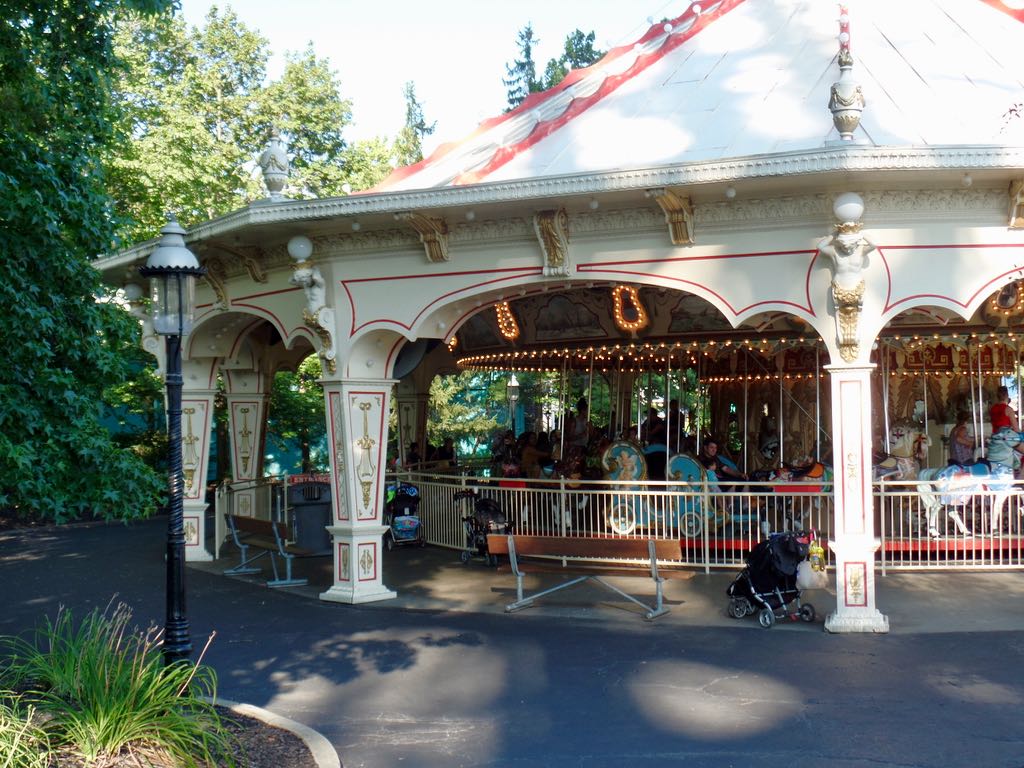 So we were there on National Carousel Day! And they have an antique carousel with a newly-restored band organ, and with any luck next year they're going to get a motor that can drive the carousel too.