Where the trail from the Smokies reaches old Gopher Gap

This letterboxing stop was at Lakenenland. And waht is Lakenenland, you ask? Well, the highway sign says it's the Lakenenland Sculpture Park, Free Admission, open 24/7. A sculpture by its front describes it as 'Junkyard Art'. The signs are made of tubes and pipes and pieces of scrap metal, cut and arranged and welded together into scenes. And now imagine dozens of these. Maybe a hundred. Most of them arranged along a trail you can drive along, as we did, on the theory it would save us time.

Some of the sculptures are obvious: bugs made out of pipes. Aliens in a flying saucer disc. A bat in front of a copper-disc moon. Some are more cryptic but whimsical yet: a rowboat stood on its end, with a half-dozen shelves put in and mock cans put on top, so it looks like a grocer's display. Oh, and one of the shelves has a traffic signal. A whole band, on stage, of chain-link figures performing to a bunch of pipe-metal wolves. A flat iron Tazmanian Devil, next to a giant arrow wedged in the ground. Some are wearing the artist's desire to be a political cartoonist: A great girder, labelled 'UNITED' and 'STATES', the words being split by a wedge inscribed ``Economy/Jobs // Heath Care // Education // Iraq // Taxes // Moral Values // Terrorism''; the hammer splitting this wedge between the United States is labelled RTW [ ``Right-to-Work'' ], and are being hammered in by bodiless arms labelled '[ Governor Rick ] SNYDER 2012'. Some are just baffling: a slot machine, with a seat held up by a $ symbol, with a little sun marked 'Feel Hot' and a snowman labelled 'Feel Cool', and there's a fan blade over the thing, and also an orange signal light. After a bit like that, it's comforting to return to some simple dadaist nonsense. The sign says, 'Lost? Which direction is north? Remember! Bowling balls always grow on the north side of a tree.' And sticking out of this huge fallen log are a couple dozen bowling balls on metal rods. Sticking out one side of the log, anyway. I assume the north, but wouldn't it be even funnier if it were the south side? Some of the statues have plaques that tell stories, like this one below a figure on a sailboat marked 506: 'Phantom 506: In the beginning of the 21st Century the retiree's [sic] of Upper Michigan's pipefitter local union 506 rode off into the sunset aboard this ship taking along with them the entire pension fund and leaving the working member's [sic] stranded on a Desert Island. This historic event eventually lead [sic] to the end of local #506. Sincerely, Temporary Tom, once a proud member!''

After soaking all that in, how about this sign warning you are now ``entering the historic Shot Point Iron Mine'', keep off the tracks and equipment. And there is a small group of what looks like real mining equipment there, including a building beside a small railroad. Maybe the site of a tiny but briefly working mine? Or just what the owner called this assemblage of once-working machines gotten from goodness knows where? No telling.

The letterbox we found nearly right away. The only delay was that the clue talked about a ``double-trunked pine'', and there wasn't really one. There was a pine growing beside the double-trunked tree, though, and once we accepted that as what was probably meant, we were good. Stamped that in a little covered gazebo before we took the grand tour.

So. Have you got a pretty solid picture of this weird roadside attraction of a guy who's turned his time and pipefitters skills to making metal sculptures from the silly to the letter-to-the-editor-they-don't-dare-edit-because-they-can't-think-where-to-start? Good. Then let me add that at the turnoff from the highway there's several signs, including these: ``NOTICE: This Property Is Protected By UNITED STATES LAND PATENT number 69,131-1 [ ... ] All Rights, Privileges, Immunities, and Appurtenances of whatsoever Nature Are Hereby Claimed''. Also:

AS A RESULT OF (8) EIGHT YEARS OF CONTINUOUS HARASSMENT FROM THE TOWNSHIP OF CHOCOLAY, THE NO TRESSPASSING SIGN IS DIRECTED AT ALL LOCAL MEMBERS OF ``PLANNING AND ZONING BOARDS'' ONLY. ALL OTHER VISITORS ARE WELCOME HERE 24/7/365. THANK YOU FOR STOPPING AND HOPE YOU ENJOY YOUR VISIT. SINCERELY, TOM LAKENEN LLC.

The referenced No Trespassing sign makes the picture more clear:

After a warning about the following federal criminal law about two or more persons going ``in disguise on the highway, or on the premises of another, with the intent to prevent or hinder [ any citizen's ] free exercise or enjoyment of any right or privilege so secured'' the sign notes a ``LAND USE FEE $5,000 PER PERSON PER DAY, OR ANY PART THEROF [sic]'', all rights reserved. All others welcome, though.

So besides this free, always-open drive-through sculpture garden, that's got to be the source of like 14,000 legends in high school, apparently this fellow has given to the community of Chocolay Township, Michigan, some thrilling town hall meetings about whether to levy a millage in order to join the regional snow-plowing agency. I bet it's a great time when his chimney catches fire.

Back on the road! It was already 6 pm and we were nowhere near the Mackinac Bridge. But we were not going to stop again until ... like another half-hour later.

Trivia: In 1902 the elevated structure of Chicago's Loop was painted a ``pale buff color'' at the request of merchants hoping for a brighter street. Soot and dirt and mud accumulations spoiled the effect and the structure was eventually repainted dark grey. Source: Engineers of Dreams: Great Bridge Builders and the Spanning of America, Henry Petroski. 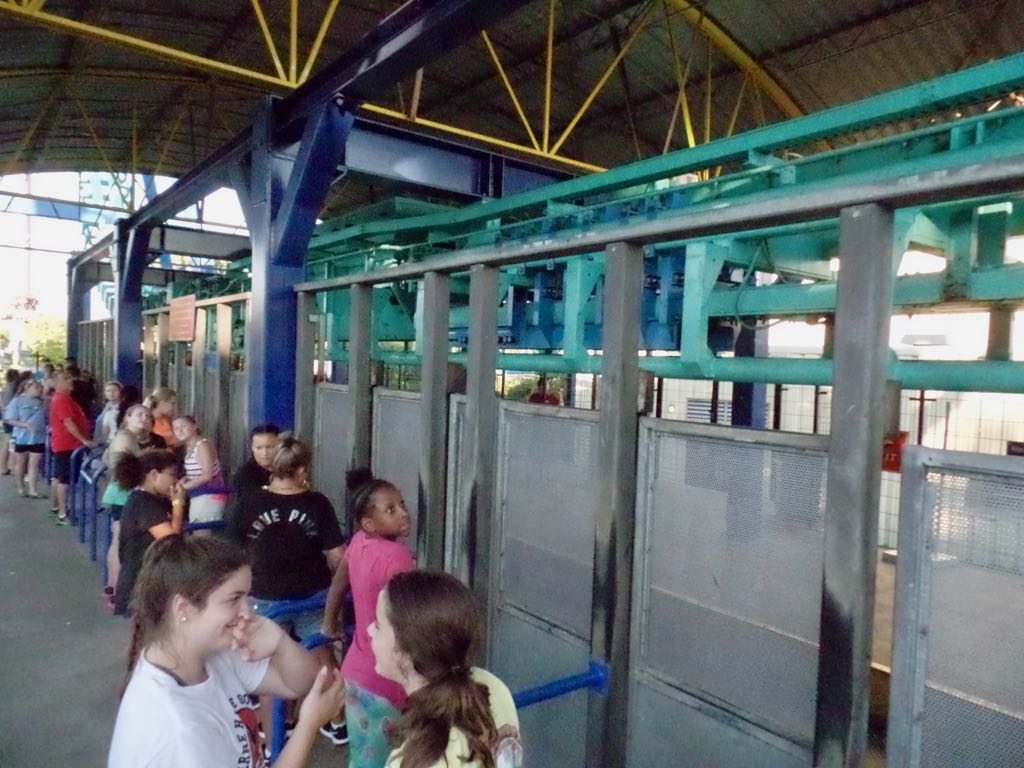 Subway-style grates at the launch station for Invertigo. I guess it's because the shuttle coaster can go through the station at speed, and they want to eliminate the chance someone's going to stumble past a regular turnstile to get there, but it does seem like more barrier than at, say, Cedar Point's Wicked Twister ride which has the similar train-at-speed in the station issue. 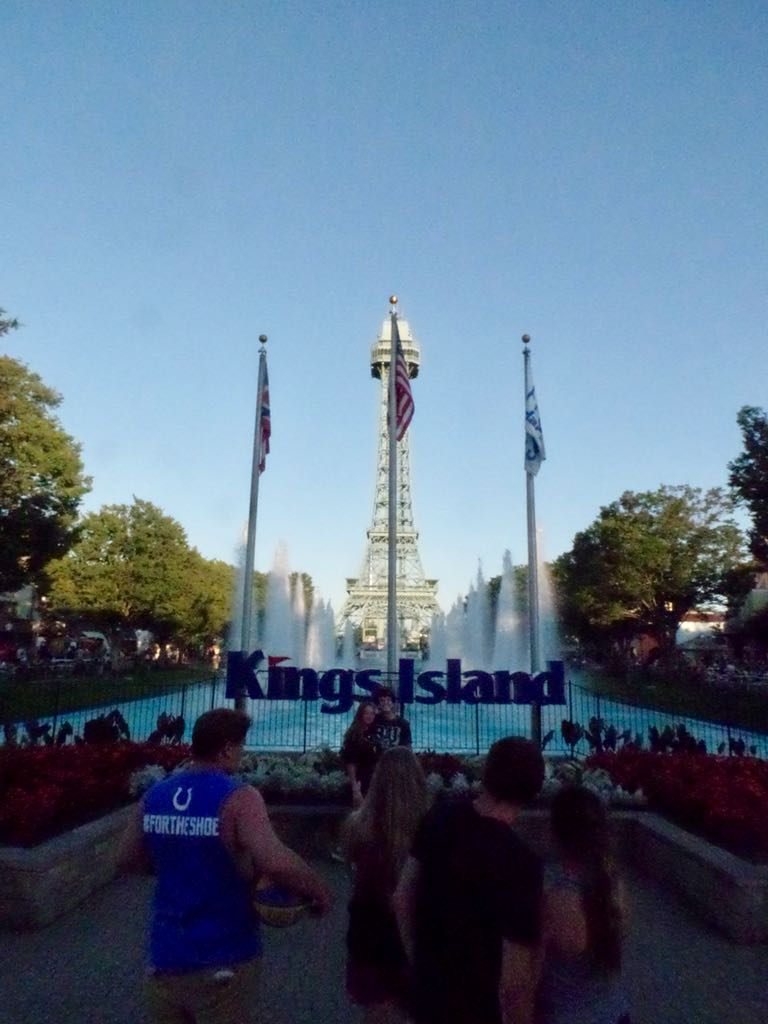 Main midway of Kings Island, showing off the reflecting pool and its Eiffel Tower. 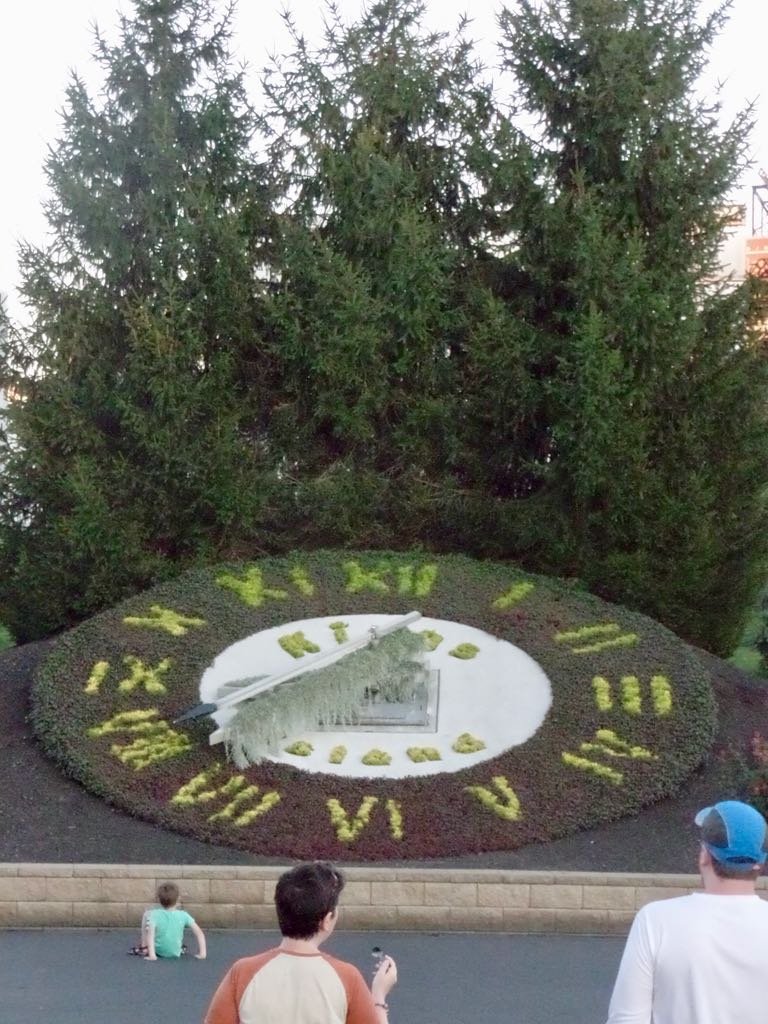 And the floral clock for Kings Island, showing just how late in the day we were getting already.