The Dogpatch Restaurant, in Munising, is themed to Li'l Abner, the comic strip that was all the rage back when the Landing at Inchon was still a current reference. The building has this Appalachian-shack style to it, all dark plank wood exteriors, signs promising ``Soups Greens 'N' Fixins'', and assuring one of ``Awesum Sandwiches'' and ``Thick, Juicy, Scrumshus Charbroiled Steaks''. Also ``Lake Superior Whitefish'' and ``Pizza'' since, well, they have to appeal to somebody. The inside is dark, looking pretty cozy. It's also got art from the comic strip hung on the walls in ways that I didn't quite put together. Like, why in the opening vestibule have the ``Proclamation- The Jury to try the hog thief, [Abner] Yokum on a charge of stealing hogs will be selected in the usual manner - at the old oak tree at noon today. Signed T J 'Hanging' Tolliver, Judge; B O 'Hangin' Yancey, district attorney, A B 'Hanging' McSkonk, Sheriff'. I know the comic just well enough to know what they're referencing, but why this?

The menu offers stuff named for the characters and written up in something like Al Capp's comic strip styling; for example, the Li'l Abne is ``A whompin' 'lishus classic hamburger. First class 'n luvable, cuz we luv you.'' Or the ``Gee-Haw-Whimediddle, Another name for this toasty'n 'lishus fixin is a Ham 'n Swiss on Rye''. There's a lot of ham and bacon on the menu, considering one of the running plot threads in Li'l Abner was threats to the life and body of beloved pet pig Salomey, the last female Hammus alabammus. Also as you might guess, the place did not have much for vegetarians, not even a sad garden burger or a grilled cheese. We ended up getting the salad bar, which was probably about what we should have gotten. The menu does list beverages under the comic-strip-referent Kick A Poo Joy Juice header, although the Kickapoo Joy Juice that's been made since 1965 doesn't seem to be one of the options.

Well. Back on the road! As we realized that we were very close to sunset and weren't even halfway across the upper peninsula yet. The more serious driving got interrupted by hearing The Flophouse podcast read another letter of

bunny_hugger's, the second time she's written in and gotten on the air. She had written long enough ago she didn't recognize the start of her letter.

About an hour and a half later we stopped for gas, at the last gas station before the Mackinac Bridge. This was a Holiday, a chain that we saw all over the upper peninsula and only one instance of below. The advancing hour did force us to skip one letterbox prospect that would've been open had we got there sooner. The box, called ``Top of the Pickle'', is just off a rest area on the northern end of Lake Michigan. And it's deep enough in the woods that it seemed unwise to try tromping around and finding that.

bunny_hugger's first night crossing. We listened to the tinky, staticky radio publicity about the bridge. And we learned the bridge isn't just lit at night, but lit in a variety of colors.

bunny_hugger compared it to Christmas tree lights. It was beautiful to see. And a bit easier to drive, since the night obscured how we were two hundred feet above the water line and, occasionally, driving on the grated lane.

This took us to Mackinac City late enough in the day that surely every fudge shop was closed. But it wouldn't have mattered if they weren't. We forgot about getting fudge for

bunny_hugger's parents until we were well out of the city anyway. Dumb, and unfortunate, and we still have to find ways to make it up to them. Really we should've gotten fudge on the way up.

But we kept on driving south. What was there to stop for? Well, there's the Grayling Rest Area, in Grayling. The rest was worthwhile, yes, but also: there was a letterbox. This one was into the trees at the edge of the rest area. But the specific trees it was in were obvious enough and the light from my iPod enough to find it. This was part of a project someone had, ages ago, to put letterboxes in every rest area along their multi-state drive. The stamps weren't anything big --- the kind you get packs of in the discount bin at Michael's --- but given the project, that's understandable.

Back to the road! And not to stop again for another hour, when we reached the Clare Rest Area, this time returning. It was past midnight. It was a chance to stretch. It was also a chance to find, yes, another letterbox. This was one hidden in the bushes close to the rest area. It was strapped to a branch, all ready for us to give up on finding it. It's certainly the latest letterbox we've ever found, and presented the question of what date to put on our finding of it. (I went with the 20th-21st as the least confusing way to represent something that doesn't carry any time-of-day information anyway.)

And then, back to the road! Not to stop again for another hour and a half, when we got home. It must have been after 3 am; but, wow, it did feel good settling in back to normal again.

Trivia: Nakahama Manjiro, a Japanese man, was shipwrecked on the island of Torishima in 1841. He was rescue by an American whaling boat, brought to New Bedford, Massachusetts, and eventually returned to Japan as an English interpreter. He was possibly the first Japanese person to take a train, ride a steam-powered ship, or be part of the California gold rush. Source: Pacific: Silicon Chips and Surfboards, Coral Reefs and Atom Bombs, Brutal Dictators, Fading Empires, and the Coming Collision of the World's Superpowers, Simon Winchester.

PS: My 2018 Mathematics A To Z: Group Action, getting back to my glossary.

PPS: How about stuff at the back end (I think) of Kings Island? 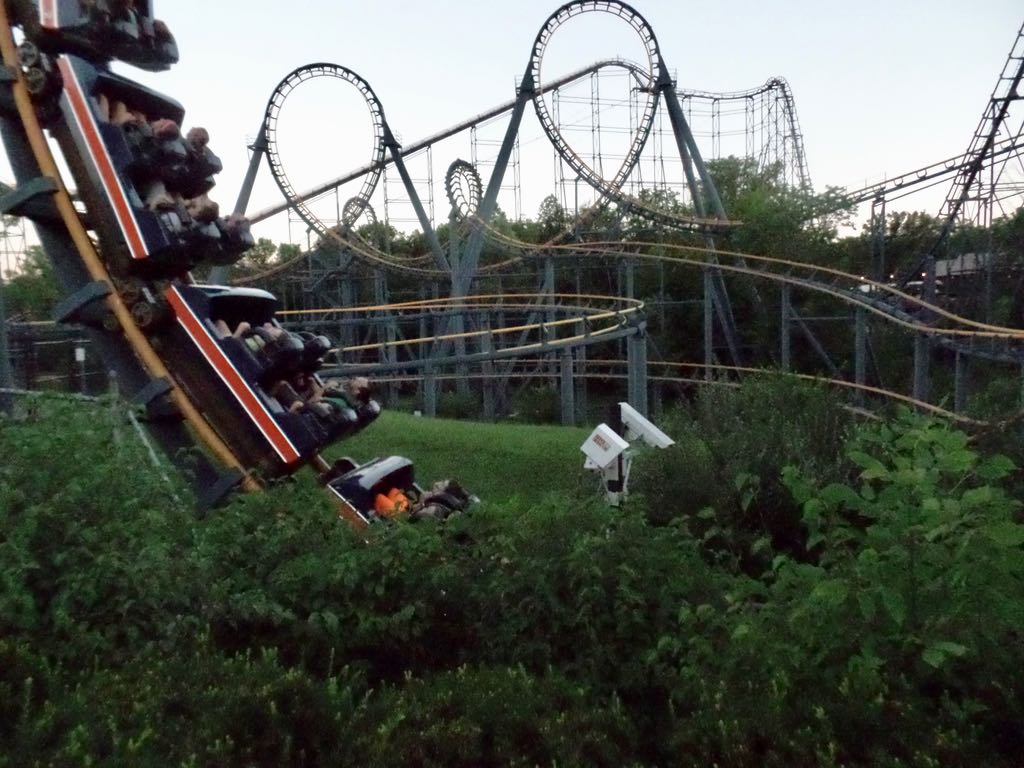 So this is Vortex, the 1980s Arrow-built roller coaster from the era when they were trying to figure out whether a roller coaster could have ALL the loops in it. This ride topped at at only 32,850 loops in its 150-second ride. 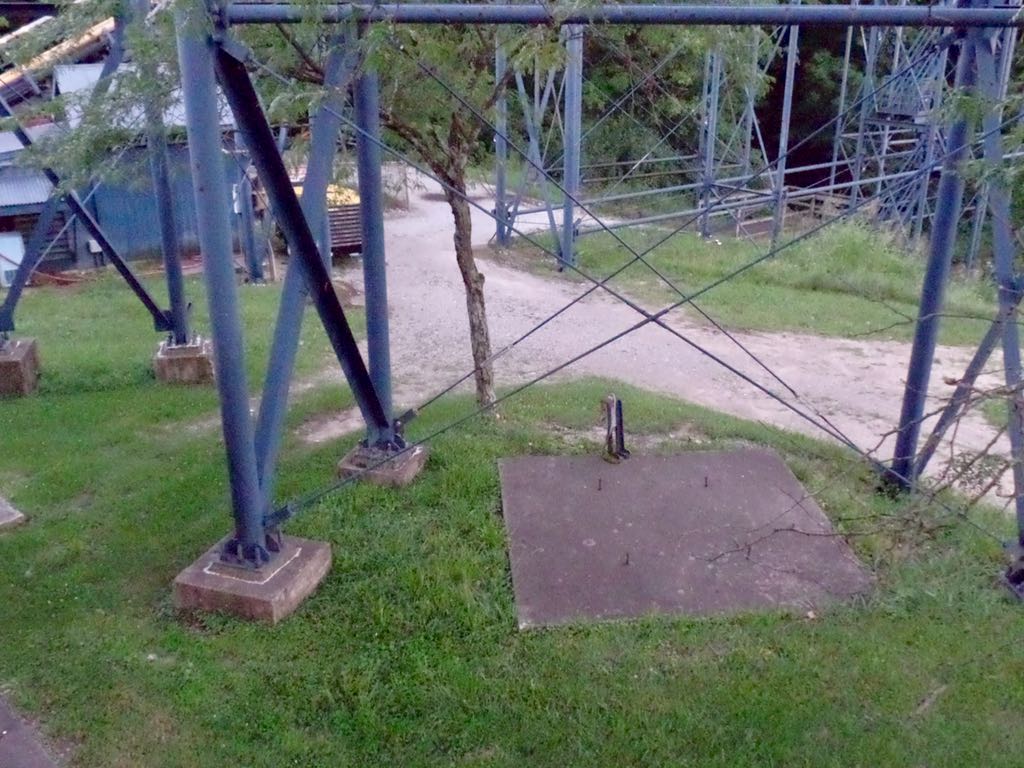 Supports for the Vortex, including a big metal platform that doesn't seem to be doing anything presently but also looks like it probably did at one point. Might possibly be related to The Bat, the short-lived early-80s coaster that was in the same place as the Vortex (and was completely unrelated to the ride now known as the Bat). 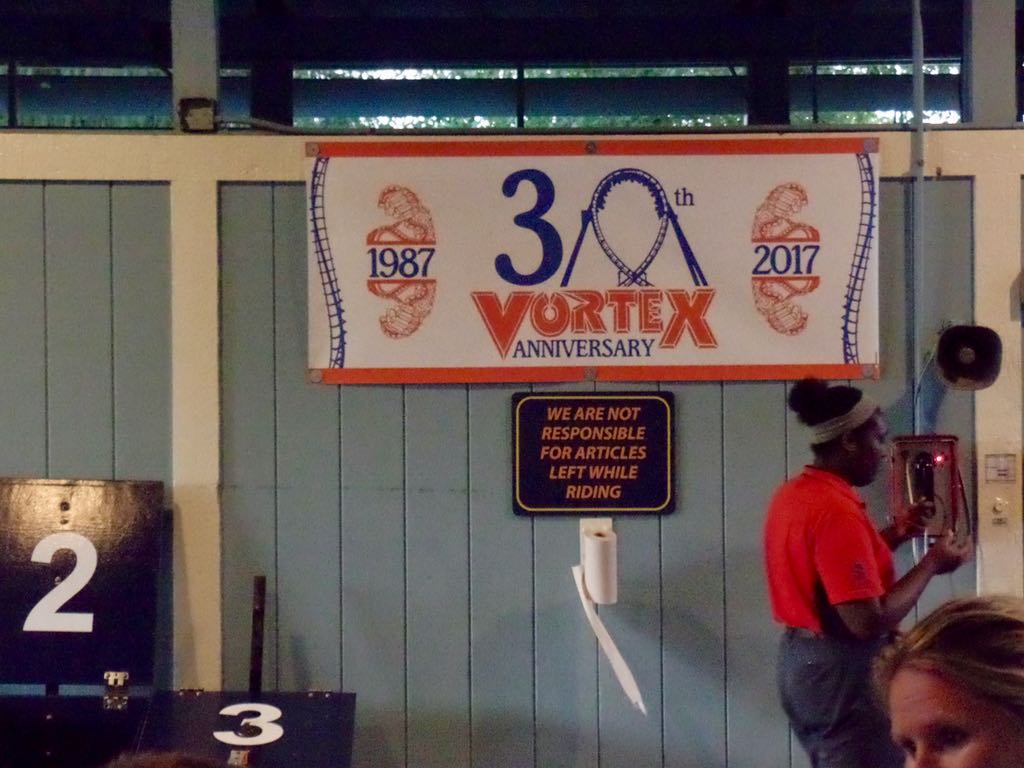 Anniversary banner at the Vortex launch platform. The ride operators were doing their best to get the whole train unload-reload-inspect-dispatch cycle down to under a minute, which we appreciated.