They can't trick us with no hot dogmatic

So how about some news about Lansing-area restaurants? Fish and Chips, once upon a time Arthur Treacher's Fish and Chips, closed this spring. The building sat empty for a couple of months while nobody quite knew what all was going to happen. It started happening over summer, with renovations and then, suddenly, the Fish and Chips sign and the faux-New-England shingles disappearing. And repaving the parking lot, amazingly.

It's reopened, as Lee Lee's Coney Island. ``Coney Island'' is a Michigan-area term for a diner. You can quibble about what makes it a coney island rather than a diner, but a big one is having coney dogs, hot dogs served in a kind of chili sauce that traces back to the original Detroit-area coney island. The place even opened, although we've not been there yet. They're still open only for breakfast and lunch, a disadvantage for us, when we're more of a dinner or after-midnight kind of eater. They have left up the in-principle-turning Fish and Chips lantern-style sign outside, and apparently the owners have promised they're keeping it around. They did, alas, cover up the Fish and Chips logo, with a canvas sign for the new name. It'd be more fun if it were Lee Lee's Coney Island and inexplicably had a lantern-style sign for Fish and Chips, but we can't have nice quirky places these days. They have left up the old Fish and Chips ``In'' and ``Out'' signs for the drive-through, at least for now. Well, one of the ``In'' signs; the opposite side of it fell off or broke and got replaced with a hand-made one a long while ago.

The other restaurant news is about Theio's. It was a coney island in all but name (and served no coney dogs). It was a reliable 24-hour place to eat for decades. We would go there after Lansing pinball league. But the place got sold, and possibly sold again; we were never clear on that. And the new owners reduced it to a breakfast-and-lunch place. And then, in March, closed altogether. That was for startling but understandable reasons: the place had failed inspection. Some problem with the electrical system; the township building inspector condemned it. They put a sign in the door about hoping to get the place reopened soon, and there it sat --- with, I noticed, a ladder in the front, where we would usually sit after pinball league --- all summer.

And then last week they tore it down. Just demolished it, one morning, taking everyone by surprise. The building inspector says it's not his fault; the building didn't have to be demolished. What the owner's planning to do with the plot is a mystery. And ... just ... wow. It's gone. It hardly seems possible.

It's been disconcerting that the eastside hasn't got a 24-hour diner anywhere around lately. That linked article mentions how bands playing the bar next door to Theio's location don't know where to go after the show anymore. Part of the Theio's energy and function is that it was where to go and eat after midnight, if you needed to. And there's nothing. Maybe Lee Lee's, if its ambitions pan out. Who knows?

Trivia: The Berlin Airlift delivered 12,940 tons of supplies on Easter Sunday, the 17th of April, 1949. This was about twice what was delivered by day by March 1949; the goal was an ``Easter Parade'' publicity spectacular. Source: An Edible History of Humanity, Tom Standage.

Currently Reading: Radio Comedy: How To Write It Including The Mathematics of Humor, Art Henley.

PS: And the end of the visit to Kings Island. 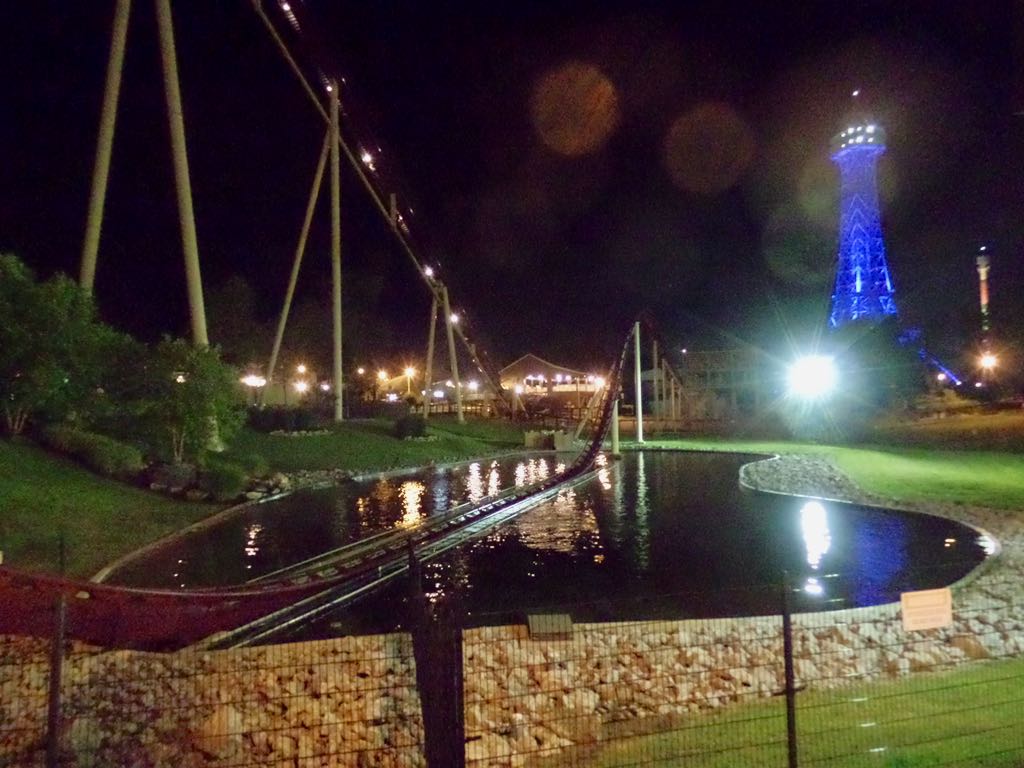 After-closing view of Diamondback, and the pond around it, with the Eiffel Tower in view. 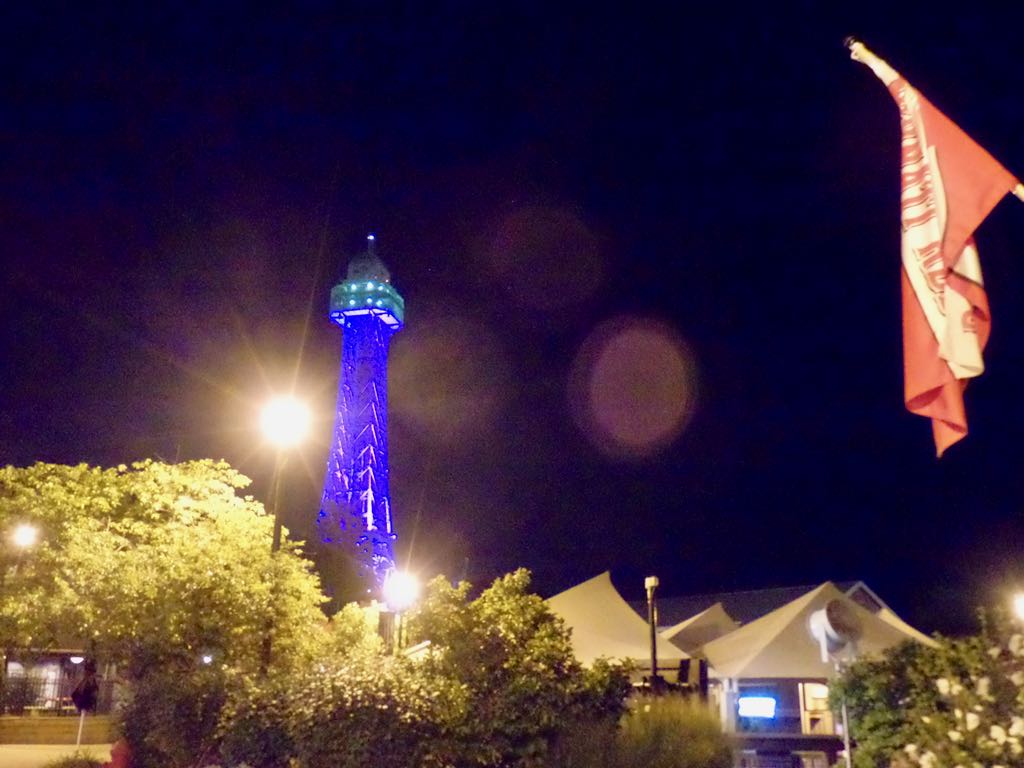 And from closer to the front, a good view of the Eiffel Tower and the buildings of the entrance midway underneath. 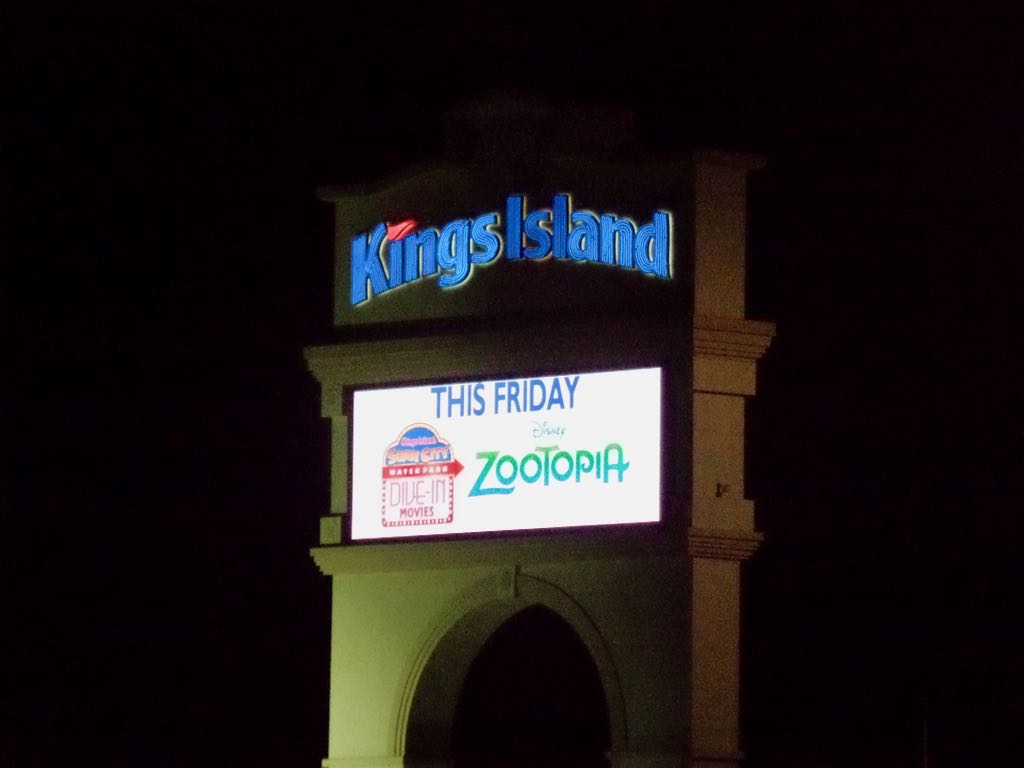 The end of the day! The entrance sign and a promise that they're showing a movie at the water park.