The subtle innuendos follow; there must be something inside

bunny_hugger aware that, first, http://letterboxing.org/ had gotten a refresh and more activity lately, and second, that there were more Lansing-area letterboxes than she knew about. In fairness, she hadn't checked in a couple years. One was supposed to be in a park on the other side of town where we never go; but, on investigation, we couldn't pin down the location. Another new, not-too-far-away letterbox was on the way to the Grand Rapids Pinball League.

So we set out early for league one Wednesday and pulled off at an Interstate rest stop we'd never visited before. There was supposed to be one box on the highway side of the rest area, next to some picnic tables and a grill we couldn't quite locate. The breakthrough here was realizing there were two picnic areas. One was the well-tended and upkept area by the side of the road, and the other was into the trees, in a clearing, where it was a bit more shoddy and overgrown. It looked like the rest area used to keep more picnic tables and grills and such than it does now. But once we had that it was easy to find the letterbox. It was, in a move that seems more common now, inside a heavy-duty gallon bag covered with camouflage tape.

Also it was full of ants.

bunny_hugger discovered this when she picked it up, and immediately dropped it, giving them the chance to flee and disassemble the nest with them. Not a good sign. We waited a while at a picnic bench I would call disused except we noticed the condom off to the side. (So when we finally emerged from the clearing,

bunny_hugger joked about what onlookers would think about where we had gotten. I pointed to our several bags of letterboxing gear. ``They will be impressed with the size of our kit.'') And, when the last ants seemed to be gone, opened up a too-weak seal.

The box had gotten wet. Not very wet, and the notebook log, inside another bag, had survived. But a bad scene still. I got paper towels from my car, of course, and we supplied sandwich bags to better secure the log and the stamp against future weather. But also there ... there was a hitchhiker. This is a small letterbox that finders are supposed to pick up from one fixed-location letterbox and bring to the next one they visit. And it was soaked.

The stamp was all right; these are carved out of rubber and can take a good bit of water, after all. The notebook, though, that was basically a loss. Fortunately it was still wet, and

bunny_hugger set about doing emergency surgery. She peeled apart each page of the notebook, as best she could make them out, and we set them out on paper towels in the flat back of my car's trunk. Many of the past stampings from earlier finders survived, if faintly. She would, after they were dried out, repair the cover and cut out sheets of paper to replace the lost sheets of the handmade log. And it's ready to relaunch, soon!

There was another letterbox at the rest area, planted by someone independent of this. And on the other side, the one away from the highway, into the woods. We attempted to find this, but realized that we didn't recognize the described terrain at all, but did recognize the poison ivy on the terrain. So we'll maybe try that one again in winter, when the shrubs will be less overwhelming and the poison ivy less of a concern.

Meanwhile, the anthill letterbox (not its real name, but it's going to linger like that in my memory) gave me the 50th stamp for my journal. The hitchhiker is the 51st. You could see this as the other way around, since we found them simultaneously. But I wrote in the anthill's log that it was my 50th.

Trivia: To get Arturo Toscanini interested in bringing his symphonies to television, RCA/NBC head David Sarnoff gave to him one of their first television receivers, a TRK 660. Toscanini would often invite dinner guests to the library to watch wrestling on WABD (the DuMont network), and offering his own commentary on the talents of ``Gorgeous'' George Weber. Source: Please Stand By: A Prehistory of Television, Michael Ritchie.

PS: My 2018 Mathematics A To Z: Infinite Monkey Theorem, one of the great ones. 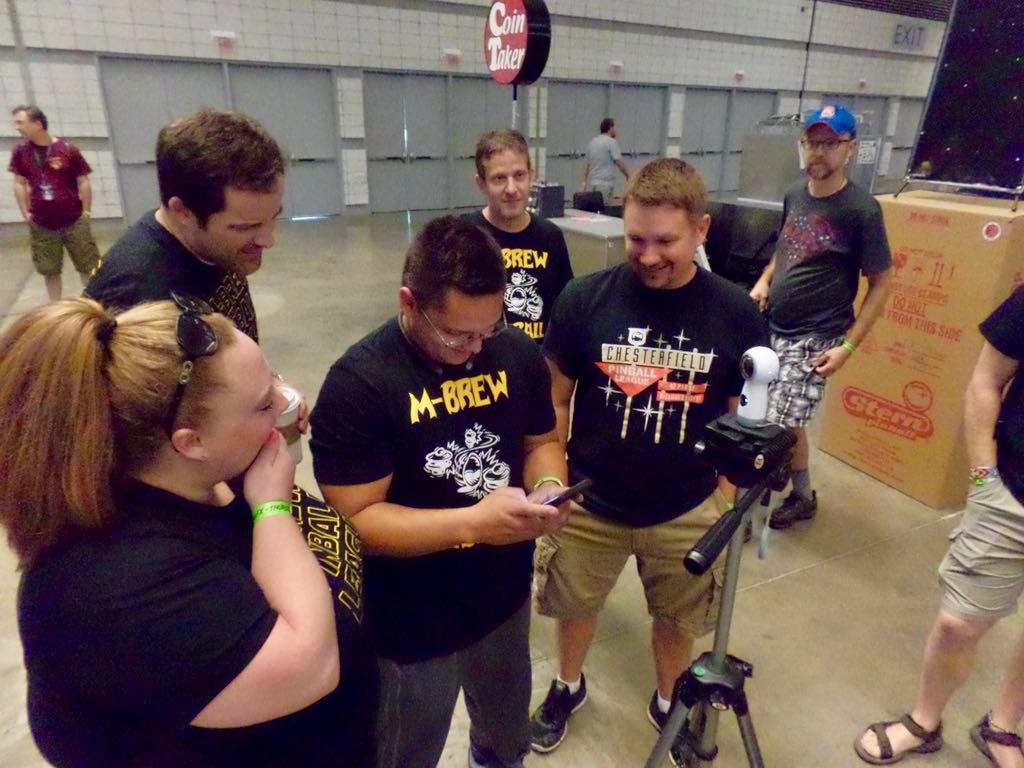 Michigan Pinball gathers just ahead of the start of Pinburgh 2017 for the annual attempt to take a picture of everybody in Michigan Pinball. For 2017 we had a 360-degree camera, the little South Park Kenny-as-Star Wars Droid figure on the tripod there. 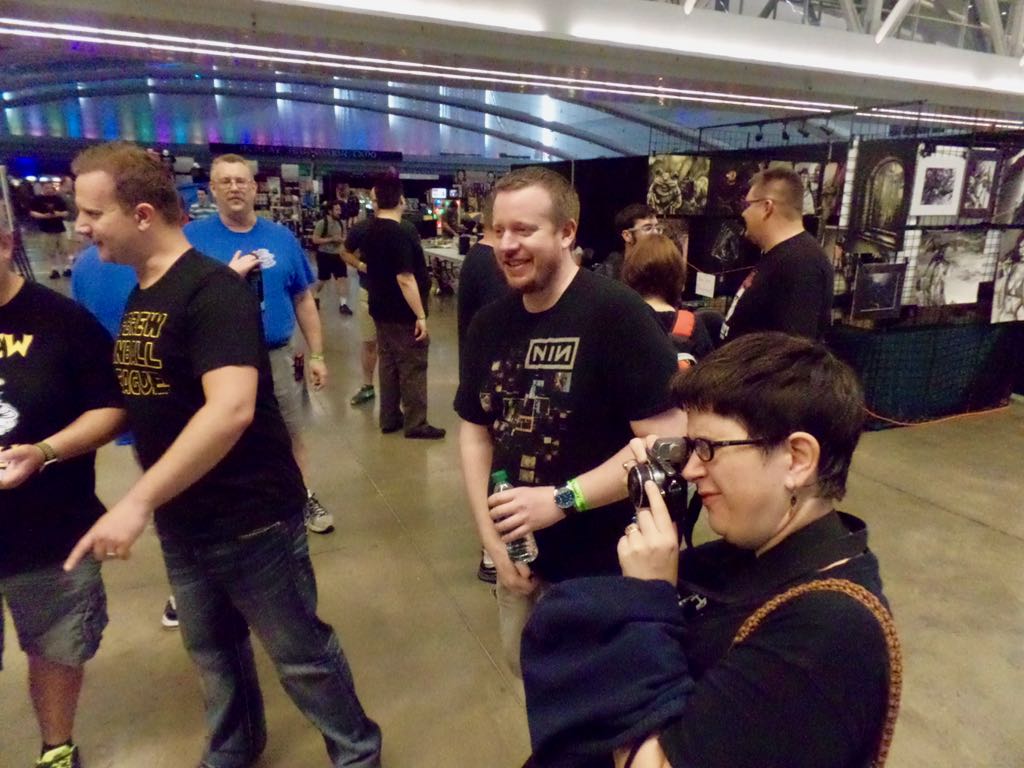 With the 360-degree camera proving difficult

bunny_hugger takes action on her own. 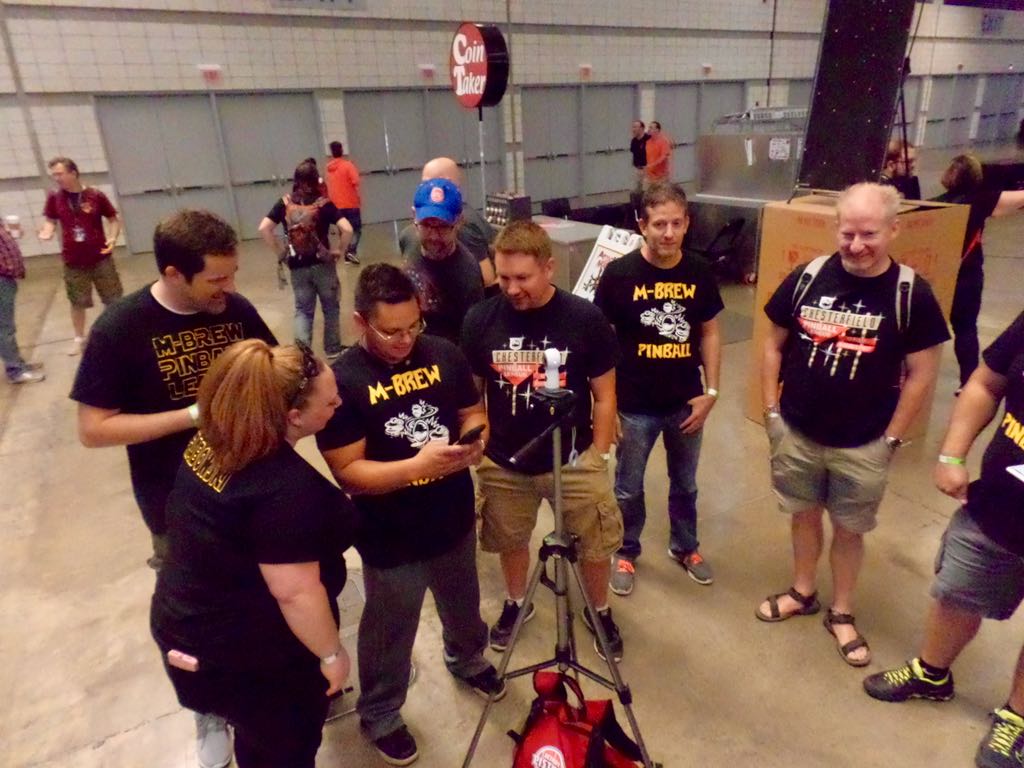 More fiddling with the 360-degree camera in the hopes that someone knows just how to make it ... camerate. It did finally work, although I never saw the group picture.