Let the sunshine in

One of the things

bunny_hugger knew about this house, when she bought it two decades ago, was that it would need new basement windows. The existing ones were these thin, plastic or plastic-like things with cracks in them. Over the years, they were left in place because there's always other stuff that demands more attention, you know? But finally last year they started getting even worse, with a hole in one bad enough it was letting cold air pour in. And given the window's arrangement and its terrible shape there wasn't anything we could do to even cover the hole well. It was finally time to get them properly replaced.

That we finally did a couple weeks ago. There's a contractor in the area that specializes in glass blocks, and he had a nice presentation about how they looked and how they insulated. Even better, he had a price quote that was maybe half what we had feared it would be. And so I woke up bright and early one Monday morning, in order that I could let the contractor in, and hoped that the noise wouldn't wake

bunny_hugger too early. (I usually need less sleep than she does, in part because I don't have to get up early to go to work Tuesdays and Thursdays or, for that matter, any day.) As if breaking out ancient windows, clearing away their cement framing, and putting new windows in place would make noise.

Well, it made some noise. Our rabbit seemed a little concerned during some part of the work that involved a lot of grinding sounds. I took that to be clearing out old cement holding the former windows in place. But didn't check because I don't want to be that guy that keeps nosing around contractors. They know their job.

And, well, it was brilliantly successful. By the end of the day we had these nice glass-block windows with openable vents in the four window spaces. There's way more light in there. There's also clearly less unauthorized air blowing in, either from cracks in the windows or from small openings where, like, pipes go through the basement frame that the contractor had pointed out, and that they sealed.

And it was even more of a bonus. The bricks underneath our front step have been decaying and falling out of place for years too, to the point that the middle two feet of the step was hollowed out. Besides setting concrete for our new windows, the mason was able to rebuild and re-cement the steps on our front porch. That's not so dramatic an improvement as the windows, which leave so much light pouring into the basement that weeks later I'm still getting used to it. But it's a good step up.

So, we hoped that having basement vents might help us with a problem. When we run the dryer the basement fills with hot, humid air. Opening the vents did seem to help keep the basement cooler. Also keeping the basement cooler: the dryer wasn't heating up any, so it would just tumble clothes forever. This made for a wonderful discovery as

bunny_hugger tried to dry clothes for work the next day. (I took the clothes to a laundromat nearby while she prepped for class.) And we called the first appliance people who'd answer our call.

This problem was simple. The dryer had a bad fuse, so it wasn't heating up. There was another problem we might want fixed, though. The air vent had a bunch of holes around the base; did we want that replaced? This seemed like a good chance to me. In about an hour and after a lot of banging about the old air vent was a pile ready for the recycle bin, and replaced with a nice shiny new one still tied to the basement's ceiling by the same wire someone had used as an ad hoc support for the old. And now, with the dryer run, the leaking heat and humidity is --- nothing. And there's not stray lint being blown over the basement either. We're feeling pretty good about what this bids for the future of our basement's livability.

Of course, now the dehumidifier has broken, and we'd only had it about four and a half years. 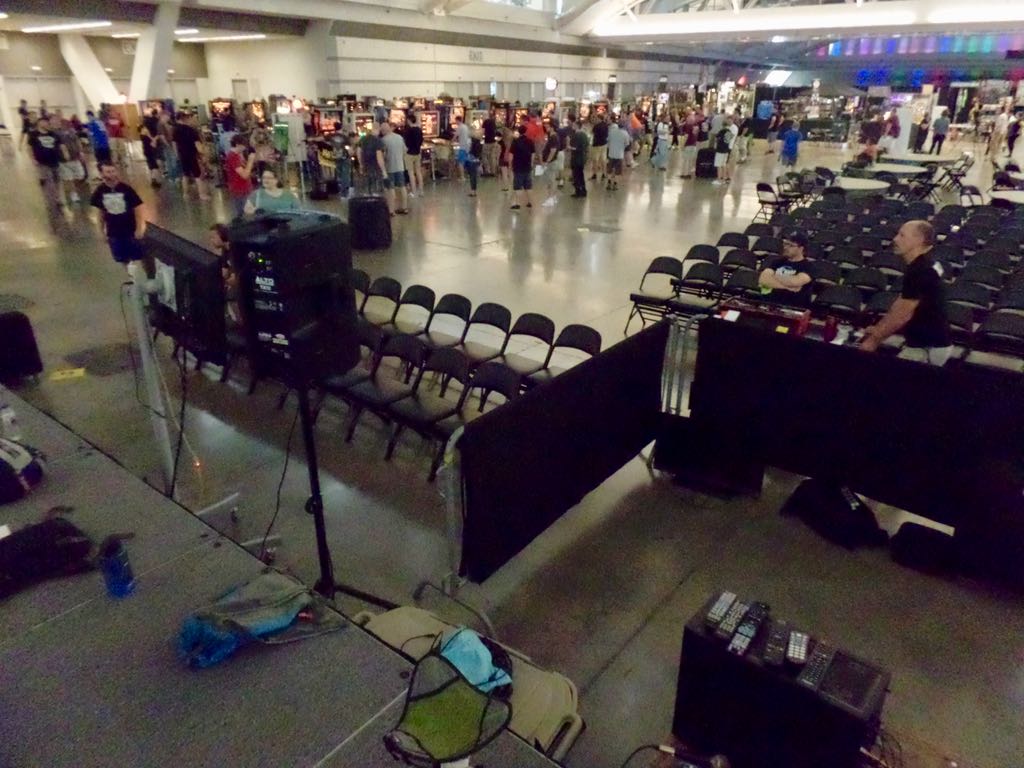 And here's what it looks like when you're up on stage. And it's the first round of the first day and nobody has any idea who you are and has better stuff to do anyway. I'm a little surprised we had that big an audience. 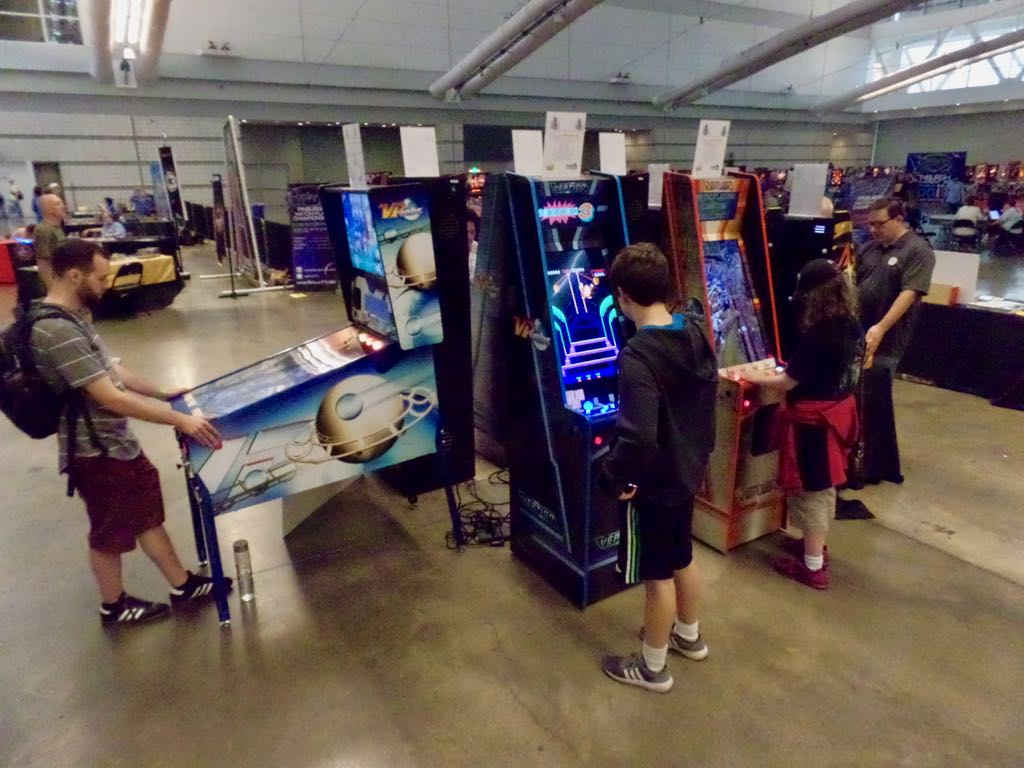 So on the left there is a virtual pinball. The playfield is a big flatscreen TV and it plays a simulator, just like on Pinball Arcade. The effect is ... kind of eerie. If my head's in the right place, it looks like real pinball but slightly off. If my head's not, it looks like some weird parallax error. But it would be a great way to have a huge variety of playable ``games'' and essentially no maintenance budget. 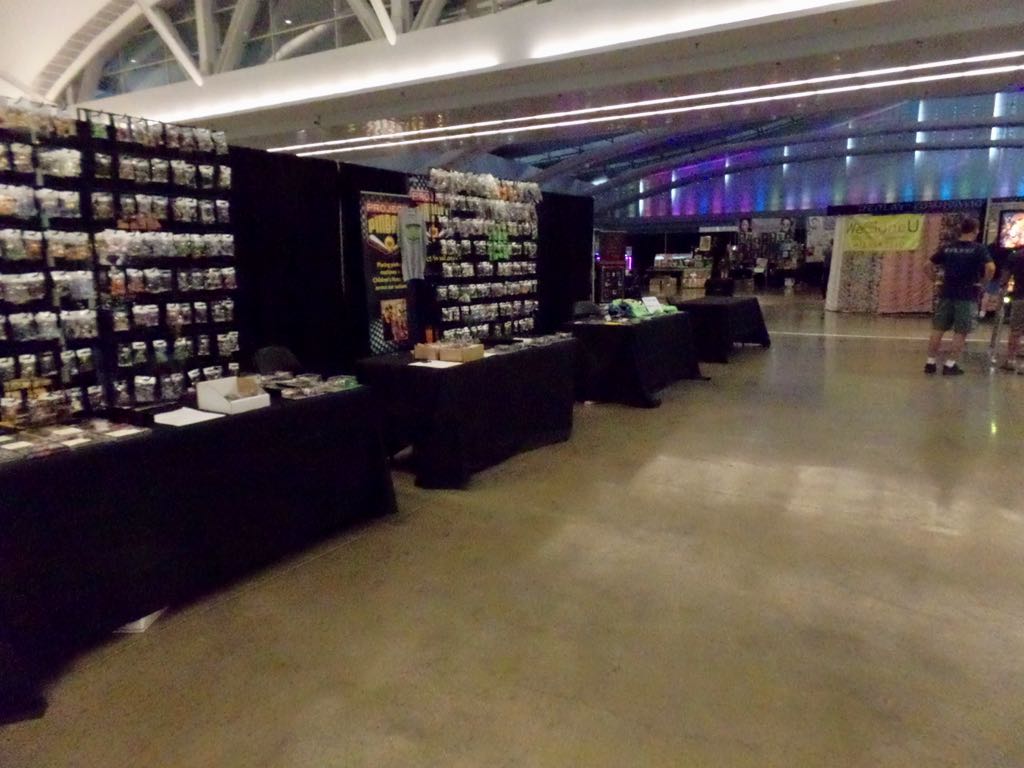 Some of the vendors selling stuff that isn't whole pinball games.