Obey the signs and boundary lines

For my birthday --- a month in the past now, but don't worry, we did less stuff worthy of journaling in October so we're catching up soon --- we made our traditional visit to Kokomo's, in Saginaw. It's about an hour away. But it's the nearest roller coaster we've ridden, and that's always good for a pleasant, quiet afternoon. And their weird miniature golf course is always good for a round. Not two rounds, as we learned one time when we tried a second go-round in the day. The second time around we breezed through efficiently and without merriment. But one round per visit? Always good.

Some sad news when we arrived. The fortune-telling toucan by the front door, which always seemed iconic to Kokomo's (their mascot is a toucan) wasn't there. There was one of those every-80s-arcade-game-in-one arcade machine there instead. I hope the machine is just out for repairs and they put the video game in for a placeholder. But that they put something in as a placeholder is ominous enough.

More sad news after we bought our ride tickets. The roller coaster, the Serpent, was closed. It's never been closed when we visited before. In the past

bunny_hugger had sometimes called to ask how late in the season they run the ride, but that's always been ``until the weather is too bad'', and somehow it never is for the visit on my birthday. It was cool, maybe, but the day was bright and sunny with just enough clouds to make the setting sun beautiful. But the roller coaster wasn't running. Whether for the day --- our guess, given it was a Wednesday and the place wasn't even busy enough to be slow --- or for the season we didn't know, and didn't ask.

So besides arguing about whether recriminations were appropriate over our not calling ahead of time, what was there to do? ... Well, miniature golf. The course is crazily complicated, with many of the greens having a choice of two holes. And all having evidence of more holes, many of them covered by movable rocks. A couple spots that had been cracked in previous years were patched. The 13th hole, the one with three levels and a tiny trough, barely wider than the golf ball, to get from one to the other, remained as baffling and difficult as ever. It's a fun course and we really need to get from someone the story of why it's so strange. And the skies were beautiful, and I found that the waterfall setting on my camera, applied to the miniature course's waterfalls --- where I could set my camera on a rock and let it work out the twenty-second exposure without moving --- did indeed produce some beautiful pictures with these misty washes of color from the waters.

Without the roller coaster there wasn't much else to appeal at the park. The go-carts are nice, but there's never a crowd when we go to them. But they assured us that we could save our purchased rides --- on a swipe card, now, rather than the wristbands of past years --- for a future visit. Maybe next spring we'll make an early trip to complete and complement this one.

And we weren't going to go all the way to Saginaw and not get sushi. The Hello Sushi place was open, and serving as well and as efficiently as ever. We had a really good dinner, just as we'd have hoped.

But, yeah, we so should have called ahead.

Trivia: Thomas Edison's mechanical ore-separating machine used enormous rollers sped up to 700 rpm, but which were to disengage the clutch and roll freely when boulders did hit, so that rocks would smash each other rather than tear up the rollers. In principle, a rock of six tons or more could be reduced to fist-sized stones in about a half-minute. Source: Edison: A Biography, Matthew Josephson.

PS: Pinburgh 2017, Day One, in the slow time between rounds. 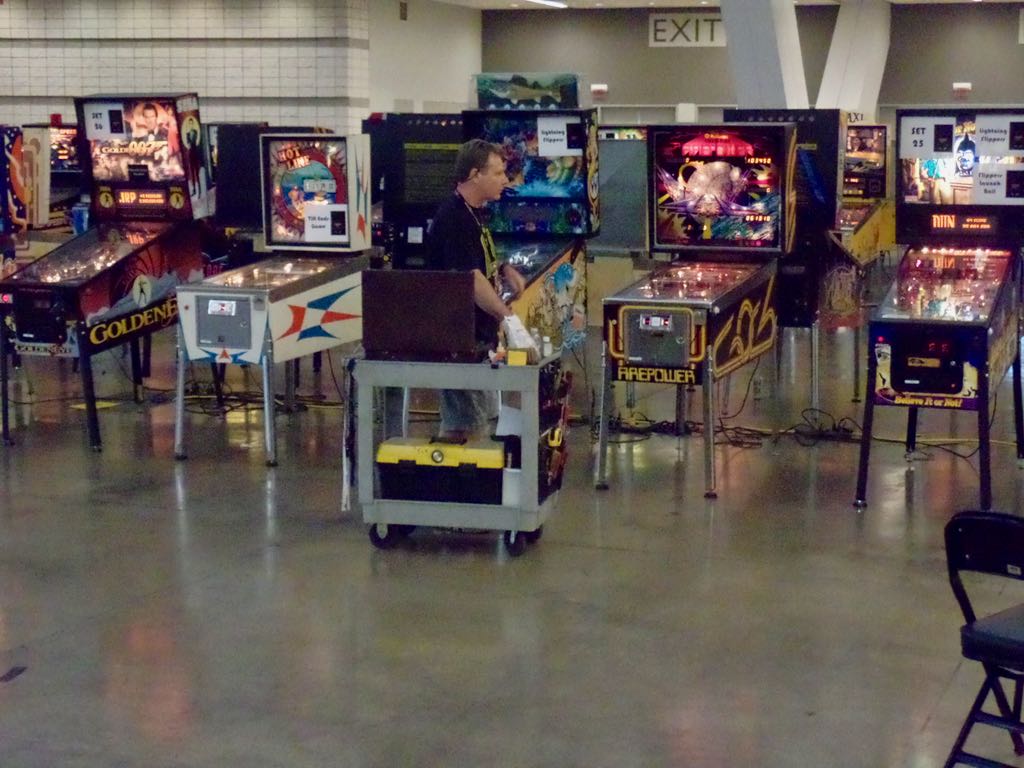 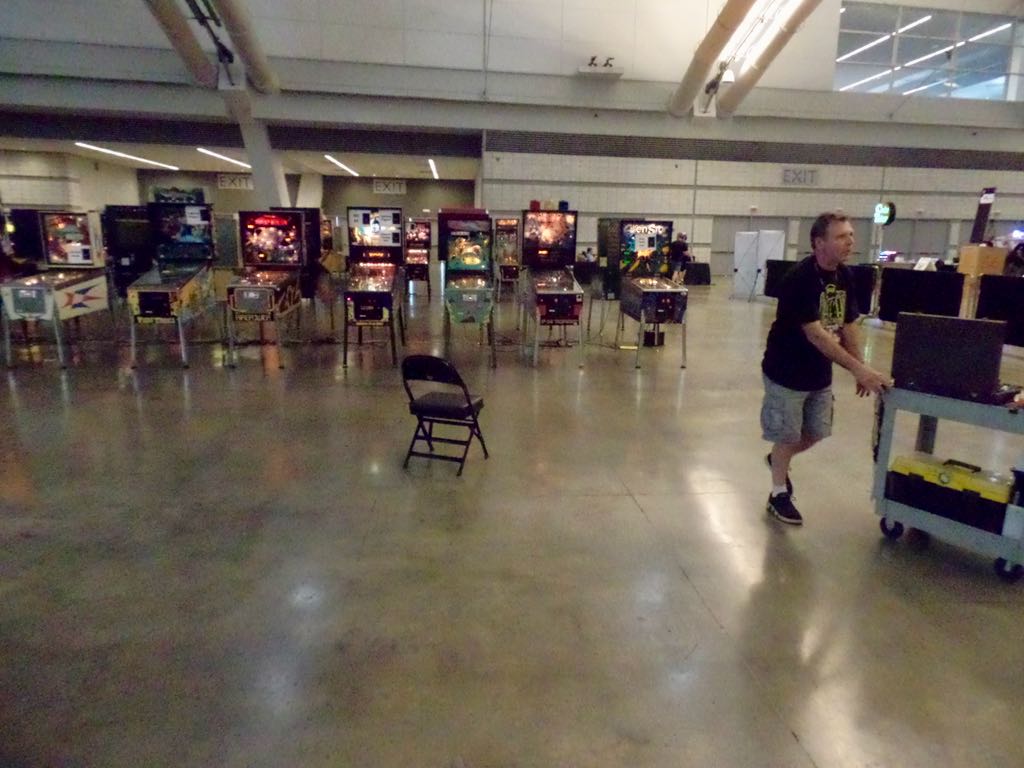 There we go! Pinball is working again and the tech can go back to wherever they come from. 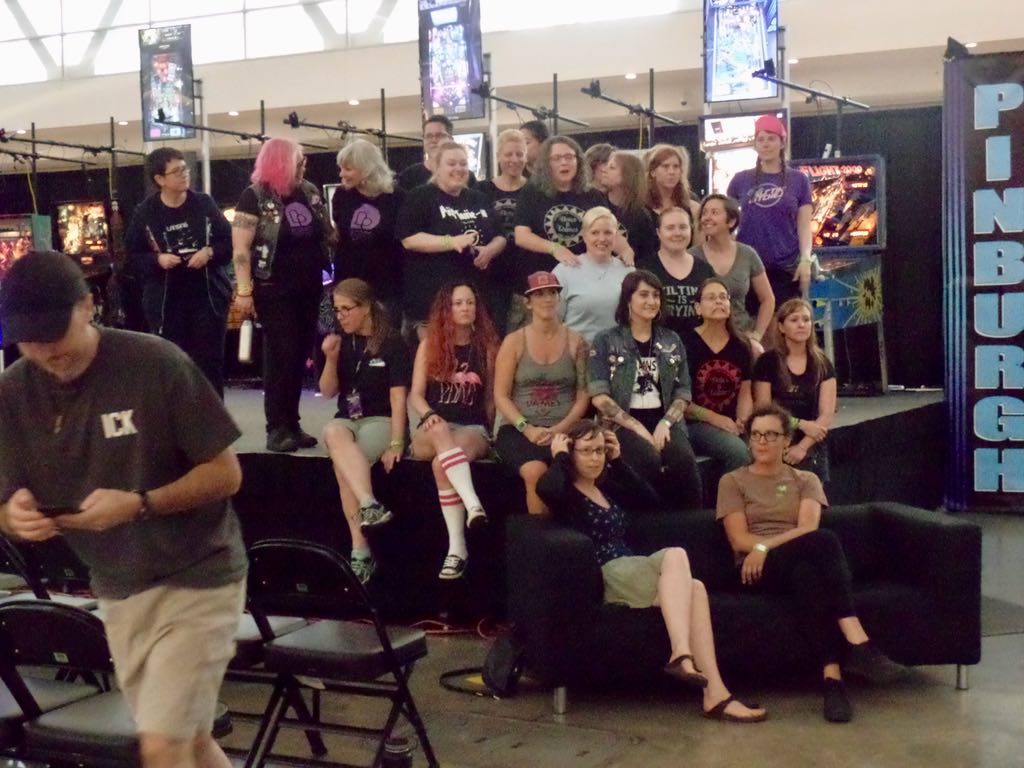 Group photo opportunity! An attempted gathering of the women of Pinburgh for a group photo and I do figure there's people missing.

bunny_hugger's up on stage, on the far left.