And a little treat for the weekend after my birthday: pinball! The VFW Ann Arbor Pinball Hall Of Fame Museum ... whatever that is, the former VFW hall turned into a private pinball club for a guy whose collection is literally several hundred games, was having an open day. Zoning only lets the place open a couple times a year. So this was a new thing for the year, an open Saturday. Perfect for us. We'd get there in time to spend about six hours roaming between the buildings. MWS, to our surprise, couldn't make it. We'd have the rare pinball event where we didn't really team up with anyone. We knew people there, of course, just didn't do more than wave hello most of the time.

Our first game was, of course, FunHouse, both of our favorite. To my disbelief, the 18 million-point high score I'd put on the table back in May was still there.

bunny_hugger wanted to play, ideally to get to the high score table. That started at a meager 12 million, that sure seemed like it should be attainable; I don't know how it hadn't been beaten by anyone in the club. But we stepped up and confidently faceplanted. Sometimes it takes a bit to get used to a particular table. We gave it another go. This time

bunny_hugger had a good, solid game, getting to the midnight multiball several times and even collecting a jackpot. She'd get to 17 and a half million, which I honestly thought beat out the high score I had on the table. It still certainly beat the fourth- and third-place scores on the table. And all I had to do was finish off my game, which was at a respectable but not awesome seven million points. ... At which point I had one of those balls that just goes on forever, where I kept hitting the mirror for awards, and the left ramp for frenzies, and the midnight multiball for just what it sounds like. And even got two jackpots one multiball. I ended up getting twenty million points, so that

bunny_hugger's great score was merely fourth place, sure to be knocked off the next time anyone has a high-score game. Still, we both got on the high score table on the same game, which is great, and the high scores are now three-quarters us. Good place to be.

So, that reason for her to kick me done, we had a nice time wandering the huge collection just playing whatever caught our fancy. The 1979 Star Trek pinball, all decorated for the Phase II TV series that never happened? Bally's Dolly Parton-themed early solid state game? Absolutely. The Alvin G &amp; Company Al's Garage Band Goes On A World Tour? And Mystery Castle Of Doom? Of course.

bunny_hugger put up a great game on that, one that came rather near the wizard mode we assume exists when you've collected all the mystery items from the castle. We briefly broke the two-player Soccer-Ball table (a ball got stuck where it couldn't be kicked out into play), but that cleared up just as we finally got someone over to look at the mess.

And some mysterious games. Italian maker Apple Time's 1987 Thunder Man, which looks like the game for an incoherent movie that just plays on the Generic Cable Movies Channel back in the 80s. Gottlieb's Class of 1812, which we mostly played to hear the clucking-chicken multiball and forgot all about playing, you know, the game for strategy or anything. We tried to play some of the Zaccharia tables, although at least one of them was refusing to start, possibly just from being out of credits. (Many older games can't really be set in a free-play mode, but can be set up so it's easy to mechanically add credits.)

This trip we didn't have any particular aim, not playing all the 1950s woodrails nor playing all the late-solid-states nor playing all the games that got me into pinball in the 90s. We did play many of them --- Secret Service, FunHouse, Checkpoint --- but that was just because we were near when we were ready to play something. It's all right sometimes not to do something efficiently, and just enjoy the moment.

As the last minutes arrived we were near a great game to close on. Bad Cats, one of the cartoon-chaos-themed games of the late 80s.

bunny_hugger had a pretty good game. I had a mediocre one. But, well, that's all right. We were there, we were playing; that's what we'd hope to do. With luck we'll do it again.

Trivia: Baseball was banished from the Boston commons in 1869. Pro-baseball players put up a slate of alderman candidates for the elections in December; eight of the twelve on the ``Red Ball'' ticket won, restoring public play there. Source: Level Playing Fields: How the Groundskeeping Murphy Brothers Shaped Baseball, Peter Morris. 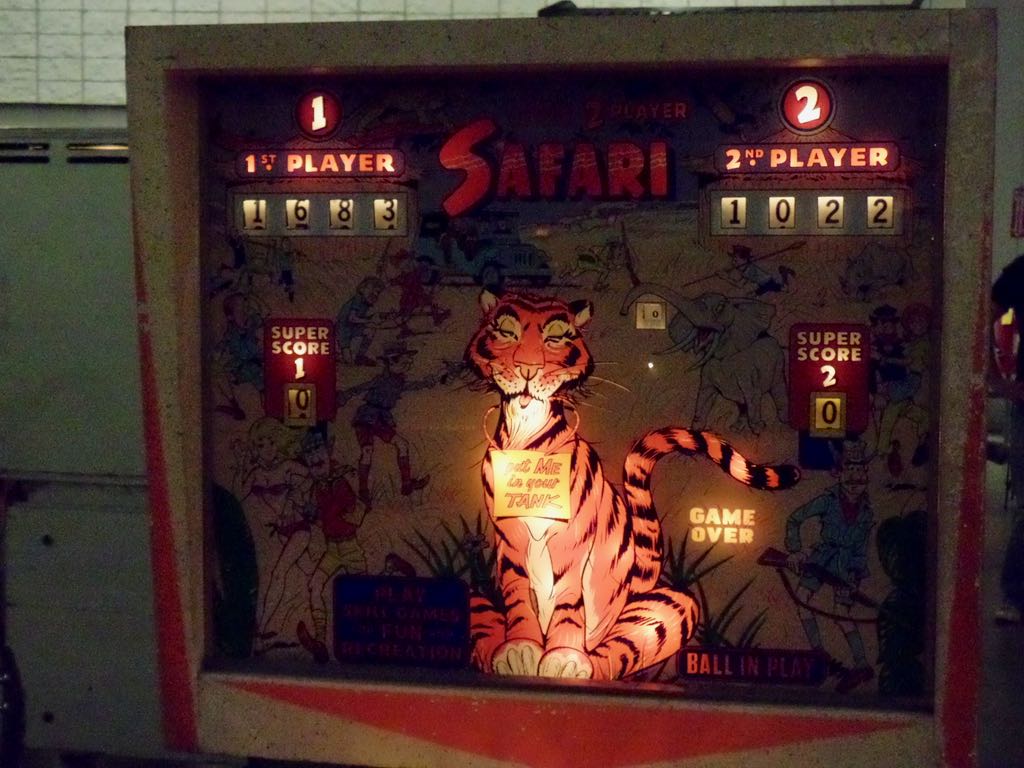 Back to the pinball! One of my post-lunch game sets brought me to Safari, featuring this backglass, and a tiger that makes me want to know which of my furry peeps here did this. 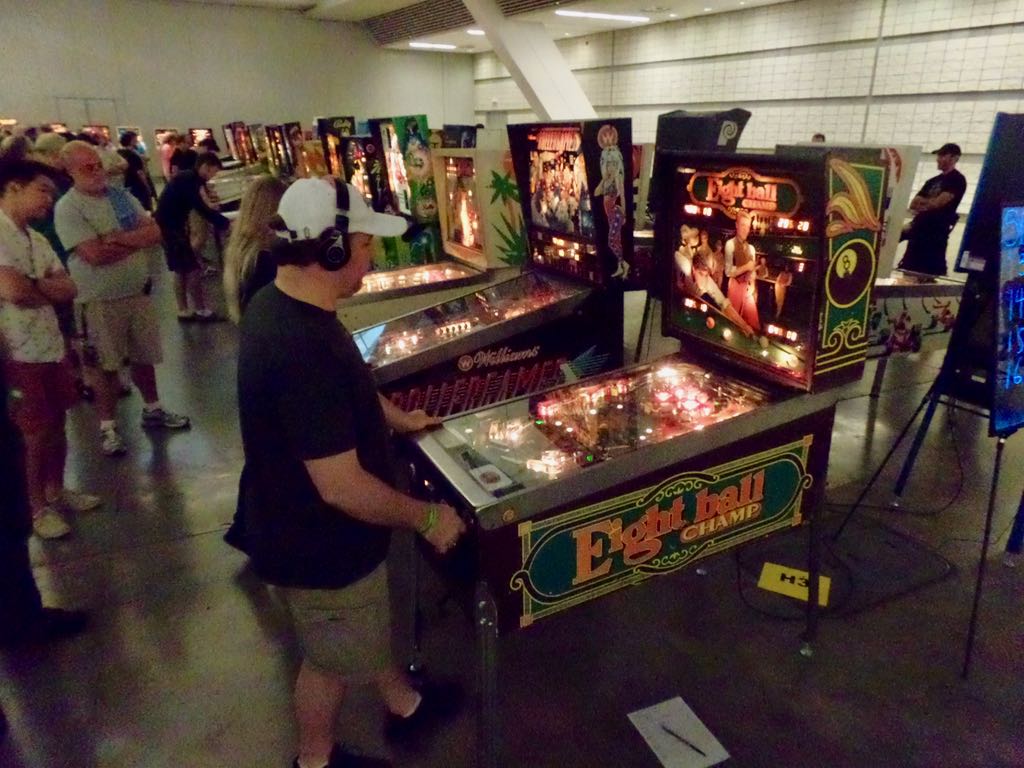 Player of Eight Ball Champ who's reached the level of pinball expertise that he doesn't listen to the game. You're allowed headphones and some players use that to block out crowd noise, or listen to some comforting music, or whatnot. I can't imagine doing it, since I do draw so much from the audio cues of the game. But it happens anyway. 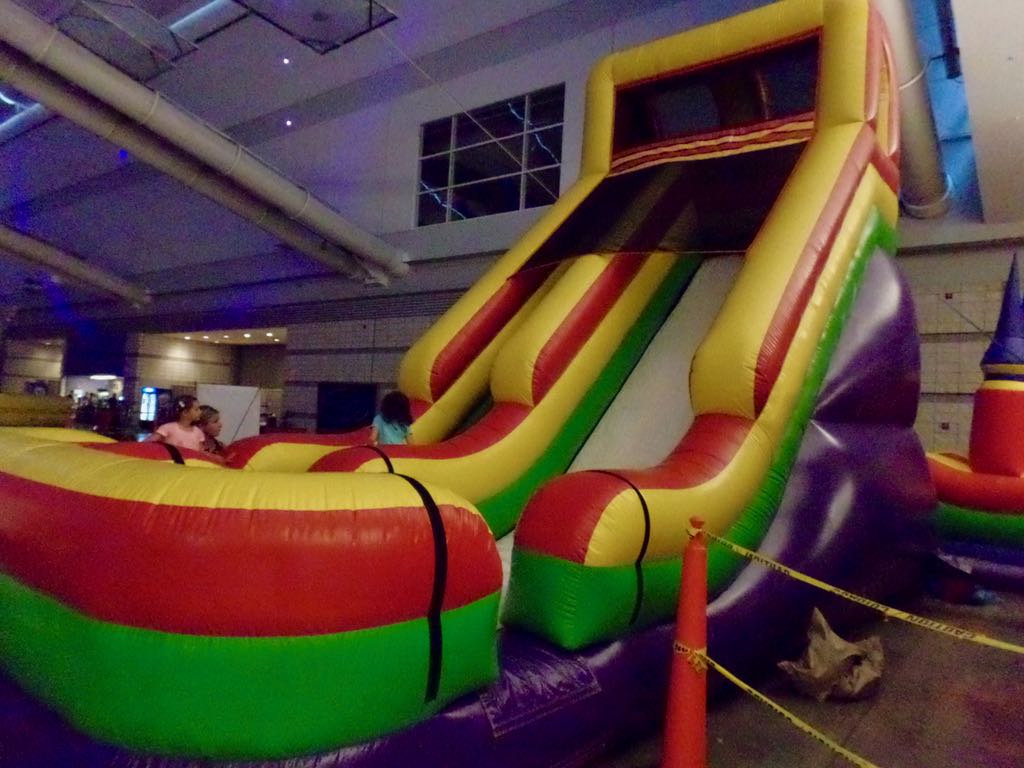 Oh, so, here's that inflatable slide from earlier. Looks like some kid's riding it.