In costumes bright and gay

We got to the Hotel Breakers later than we originally wanted, of course. We didn't have to wait through a long line checking in, though, something

bunny_hugger had feared. We did have to wait, since apparently everyone went on break just then, but we were the entirety of the line most of that wait. Also we had a third-floor room just off the center rotunda, which seemed to promise a nice quiet room since there's no fourth or fifth floor except it turns out at the center rotunda. It turned out we were in a wing just far enough off the rotunda that we didn't have anyone running around above us. But we didn't know that right away. And

bunny_hugger worried about it, and my assurance that we could change rooms if it were noisy Friday night didn't reassure her since last year's room wasn't really loud until Saturday night.

We settled into the room a while, though, and I think

bunny_hugger had to deal with some annoying student problem. So we ended up getting into the park after 7 pm, not just after early admission but also after regular admission. The good side: it was non-rainy enough that

bunny_hugger felt comfortable wearing her Stitch kigurumi inside. The park doesn't allow people to wear elaborate costumes --- I think stuff that conceals the face or that might fly off on rides is the issue --- but kigurumis are the sort of casual thing we've seen in the park the last few years, and she finally was courageous enough to try. I failed to bring my red panda kigurumi, but definitely should next year. (Unless they do finally make an Angel kigurumi in my enormous size.) As a bonus, the fleece outfit with its pull-up head was warm enough around the neck that she didn't miss her scarf. The down side is that underneath a jacket it was hard to tell what she was dressed as. One ride operator noticed, but thought it was just a Stitch hat.

There was already too long a line for Steel Vengeance and for Maverick for us to ride. But we were close to the Mine Ride --- sad to say not dressed up as Mystic Mine Ride in repeat of last year's Halloween stunt --- and that was a good start. Also I was surprised it was running, given that Halloweekends Fridays don't usually have all the rides running. Possibly it was open because some ride like Top Thrill Dragster, more sensitive to the wind, was closed.

The trouble came when they pulled the restraint bar down. Each of the three seats in a Mine Ride car shares a restraint bar mechanism, so it has to fit everyone or no one. And

bunny_hugger, between her long underwear, Stitch outfit, and (buttoned) jacket, came precariously close to not fitting. We think the restraint went down farther than usual this time on this ride, but still. This caused her to fear what would happen on rides with tighter constraints, like Millennium Force, the seat and restraint for which don't fit female body shapes well to start with.

And I'm sorry to admit I lost my temper. The day had been a series of things

bunny_hugger worried about --- her back, the mail, our late start, the Halloween party we were missing, my galoshes, a scare about whether she'd left some medicines behind, the weather, her scarf, the check-in queue, her students, and now the ride constraints --- and me insisting that it would all be okay. And I have a terrible manner for answering this kind of anxiety. I tend to be the sort of person, faced with a problem, who'll say, ``it's all right, it's not like anybody's arm fell off.'' And then

bunny_hugger will hold up somebody's loose arm and say, yes, yes it is, here it is. And then I answer, ``Fine, but it's not like his head got chopped off.'' And then she holds up his detached head and says, yes, it's right here. And then I answer ``All right, but nothing worse is going to happen to him now'' and then somehow this isn't consoling. And then we have several more go-rounds until everybody is angry. I didn't have anything left, and I should have had, and I'm sorry. Which left us in the Town Hall Museum, beside the gryphon statue and this great scale model of Steel Vengeance that promised to be working someday, feeling at our worst.

Also while there I realized there was a great picture to be taken, with the gryphon in foreground and the carousel horses on display in deep background, but the line of sight was never clear of people walking around to take it.

bunny_hugger suggested we come back on a less-crowded day, and we forgot to the rest of the weekend. We also forgot to come back and visit the carousel horses.

But then this was also the worst the weekend got. After that nadir, after the wringing-out and talk about it, we could go back out and have a better time.

Trivia: The captive balloon for the 1893 World's Fair was named the Chicago; it held about 100,000 cubic feet of hydrogen. Source: The Devil in the White City: Murder, Magic, and Madness at the Fair that Changed America, Erik Larson.

PS: Reading the Comics, October 26, 2018: I Am Overloaded Edition as there were a lot of comic to write about last week.

PPS: What was so exciting for me on the second day of Pinburgh 2017. 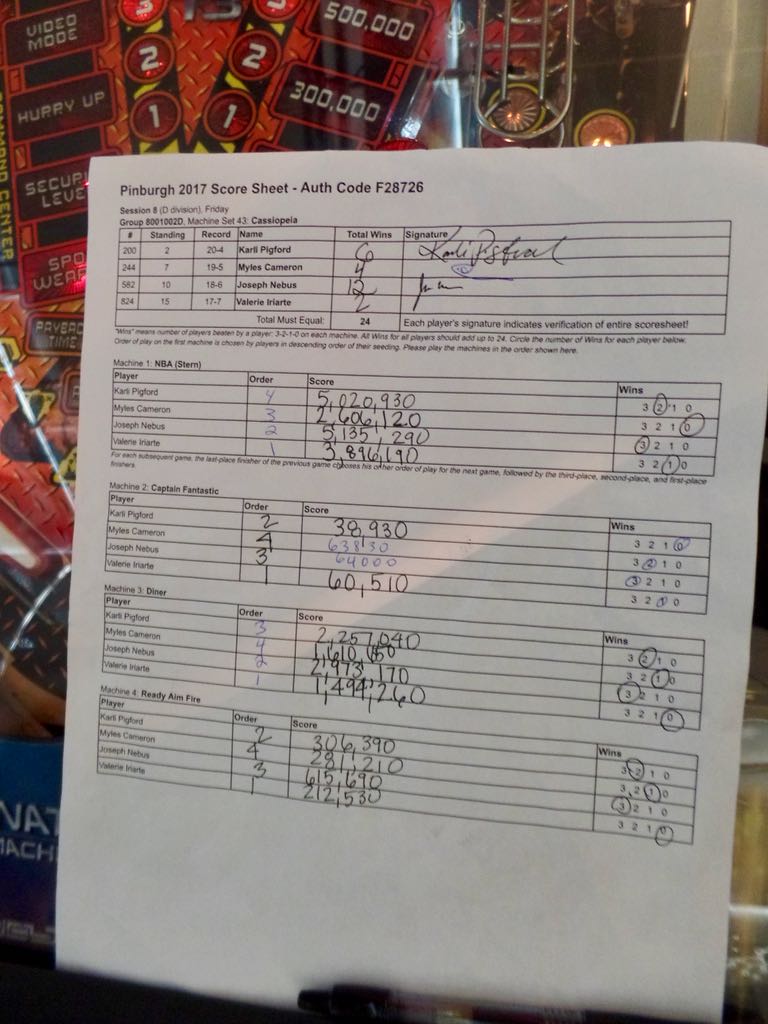 It was all worth it. Ready Aim Fire! got to be working very well, by my count. My score on it was twice anyone else's and with that ... you can see ... I had a perfect round, 12 wins. This launched me to the top of the D Division and I never really sank from there. 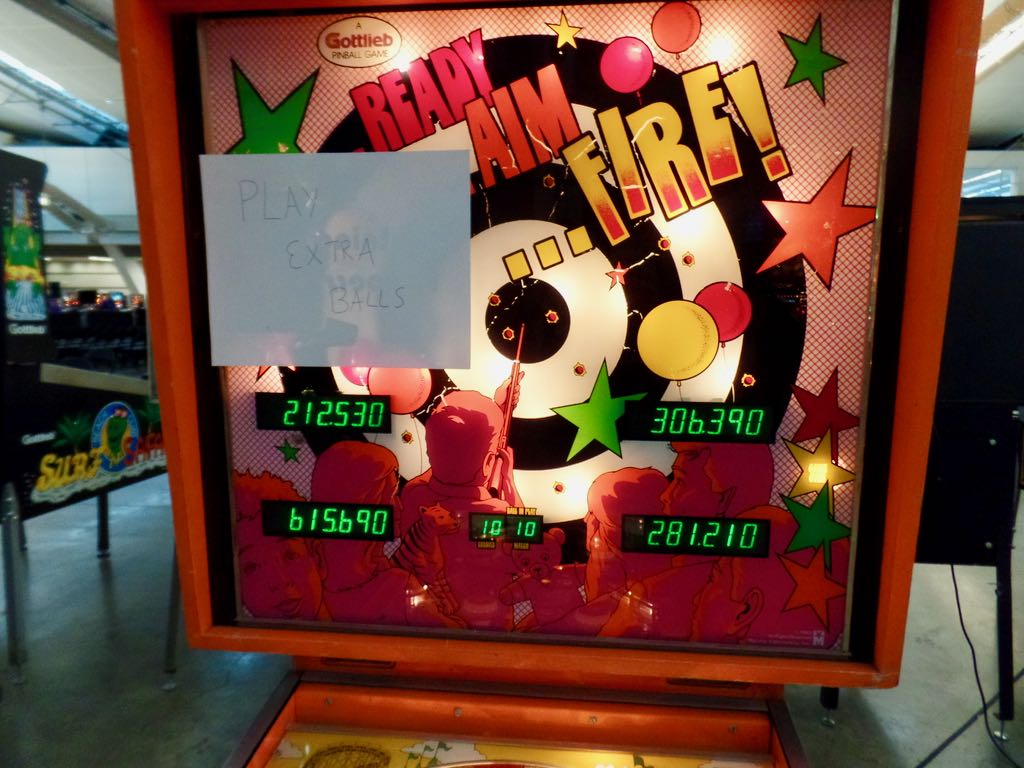 Final scores on the final game of my perfect round. Since I got last pick of place this game, I don't know how I ended up Player 3. Typically people pick the last position available so I would expect to have been Player 1, but it looks like one of the other players had a preference for going first. Which happens; I have an idiosyncratic preference for second, given the chance. Most modern games let the operator turn off extra balls; older games, though, they can't, or it's hard, and the tournament just deals. 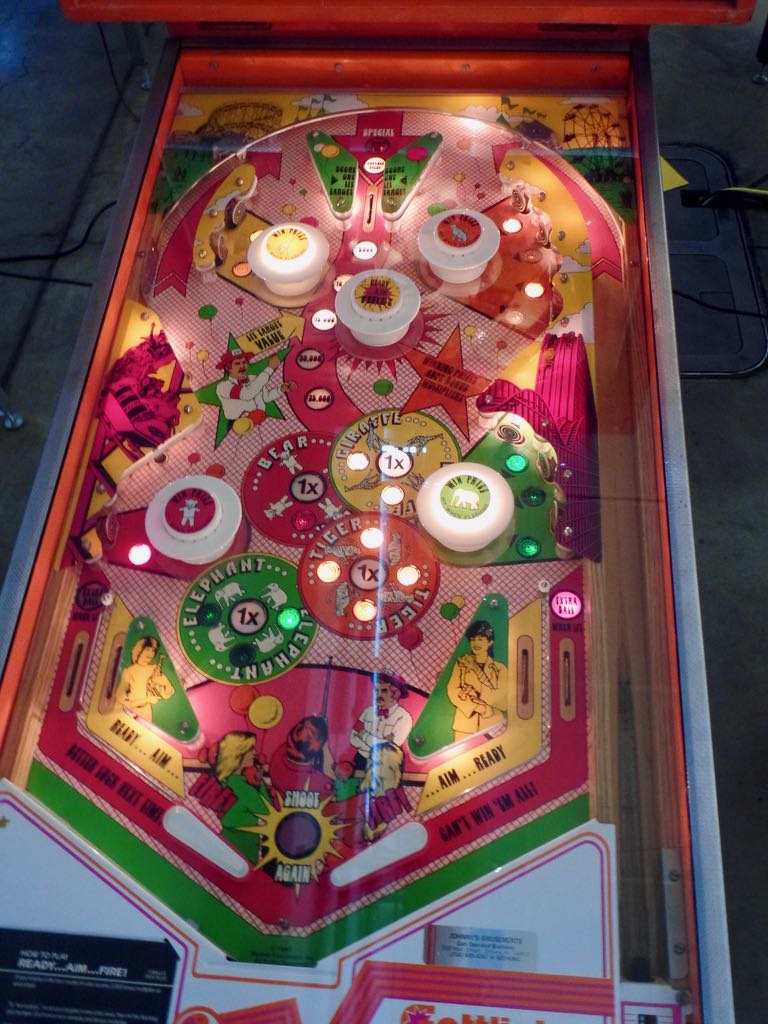 And the Ready Aim Fire! layout, which I got to like so. It's an early solid state game, but plays very like an electromechanical: hit sets of the same-colored target to collect bigger prizes. I had that rhythm where I could just keep sending the ball to the nice safe targets up on the top there and what a nice arrangement that was.