How do you think he does it?

bunny_hugger. Thank you for spending the past year with me.

I should have written a little more on my mathematics blog this past week. I just lacked the time. If you skipped seeing it on your RSS reader, here's the content, nicely assembled for you:

And to the story strips. What's Going On In The Phantom (Sundays)? Is The Rat Nearing Death Yet? August - November 2018 in plot recap form here.

And now the rest of my pictures from the second day of Pinburgh 2017. This would be mostly lunch break, two more rounds, and then when I finally emerged from that cavernous room which, between one thing and another, I didn't leave (apart from the attached bathrooms) for over twelve hours straight. 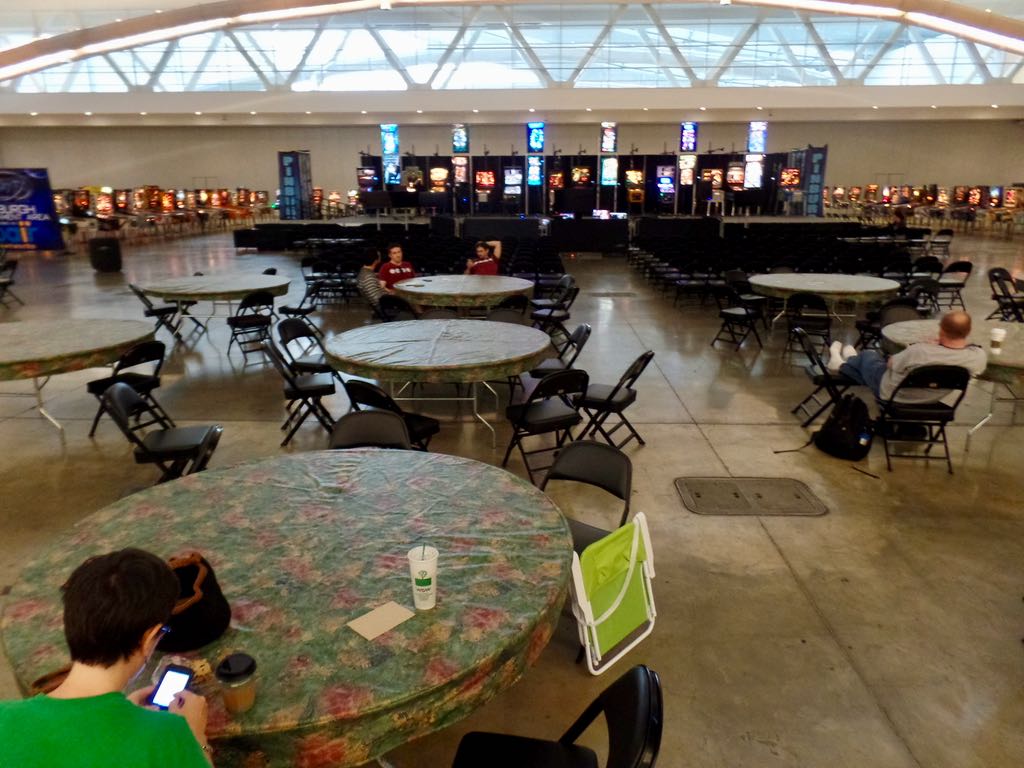 bunny_hugger in the lonely quiet period during the lunch break. My group ran late, because we were behind that Lyman F Sheats group that ran long and had a malfunction and all that. So I think this was when I found

bunny_hugger, who was eager to tell me about her perfect round. 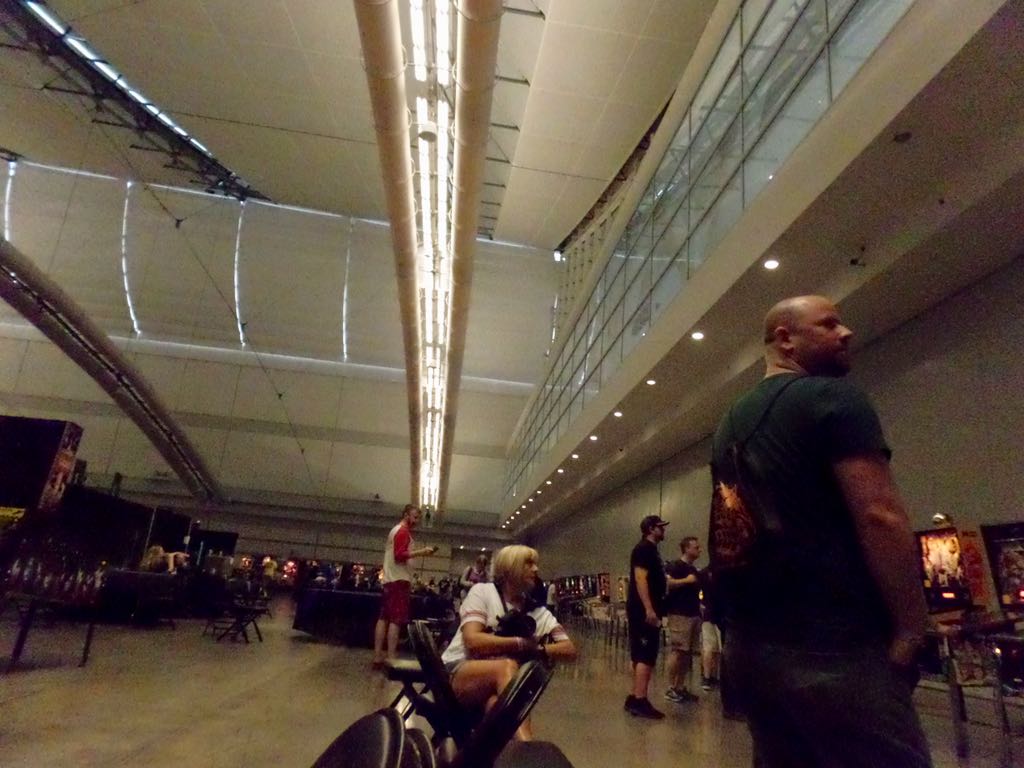 Waiting on a replacement game. After lunch break there were still two rounds to go and one of mine had to be diverted to the row of games along the back of the venue. 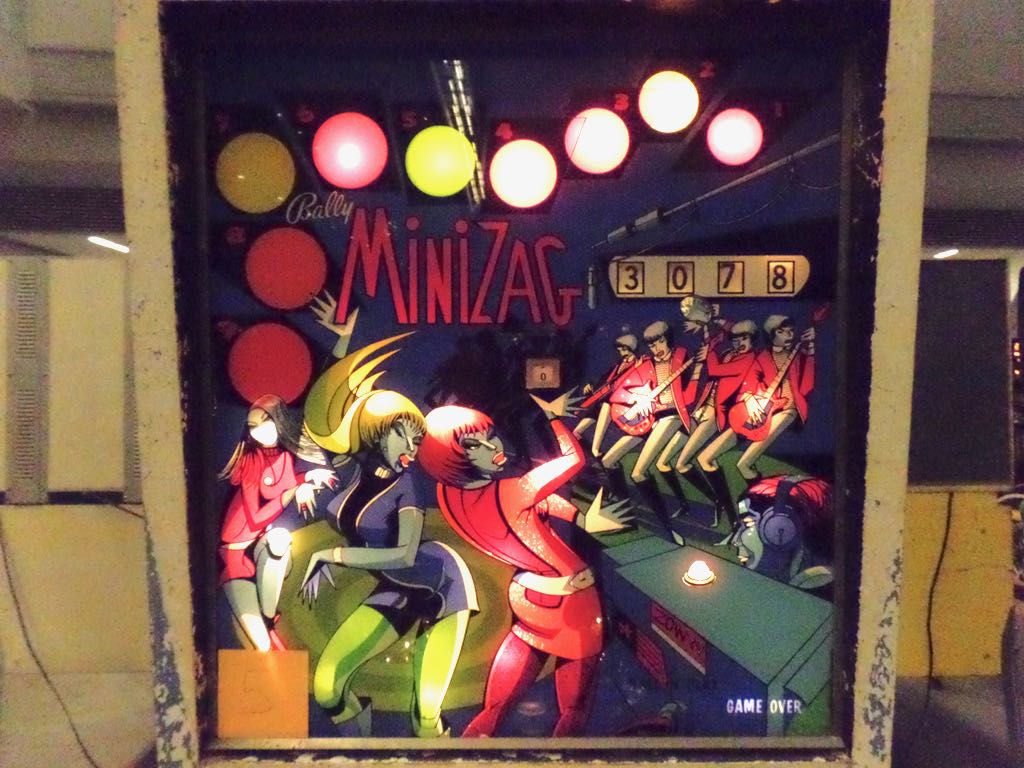 Bally's 1968 game Minizag, which does not have Christiaan Marche artwork but still, wow, look at that style. 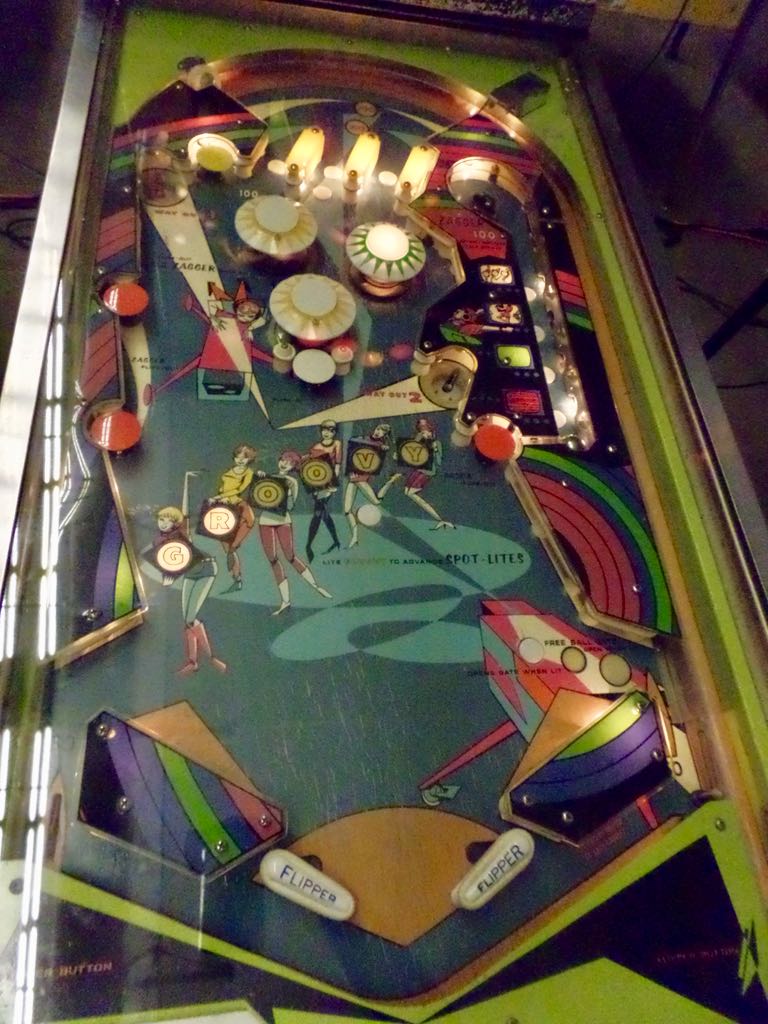 Playfield for Minizag. It has 'Zipper Flippers', which, in response to certain targets, will zip together so that in theory it's impossible to lose the ball down the center. In practice, if you're playing nervous, you can lose the ball between the zipped-together flippers, and then you feel terrible. Note the playfield lights spelling out G-R-O-O-V-Y. 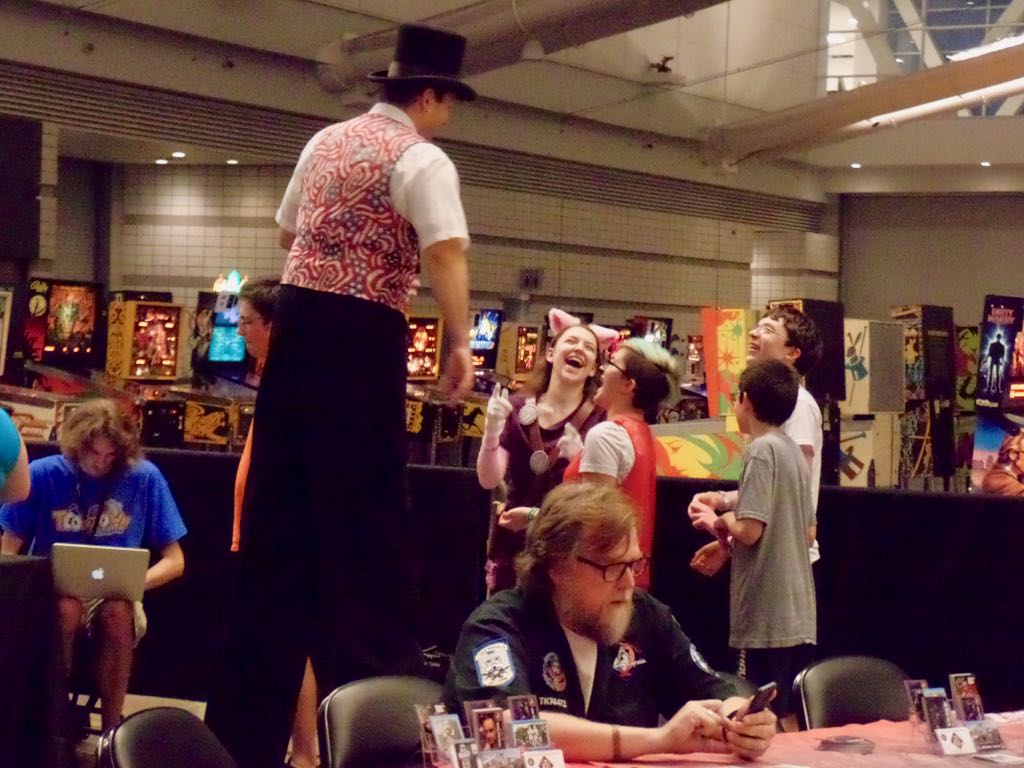 Stilt-walker clowning around with some of the people wearing Toontown Rewritten props. The woman in the red shirt had a cute cartoon-animal nose that I didn't get a good picture of. 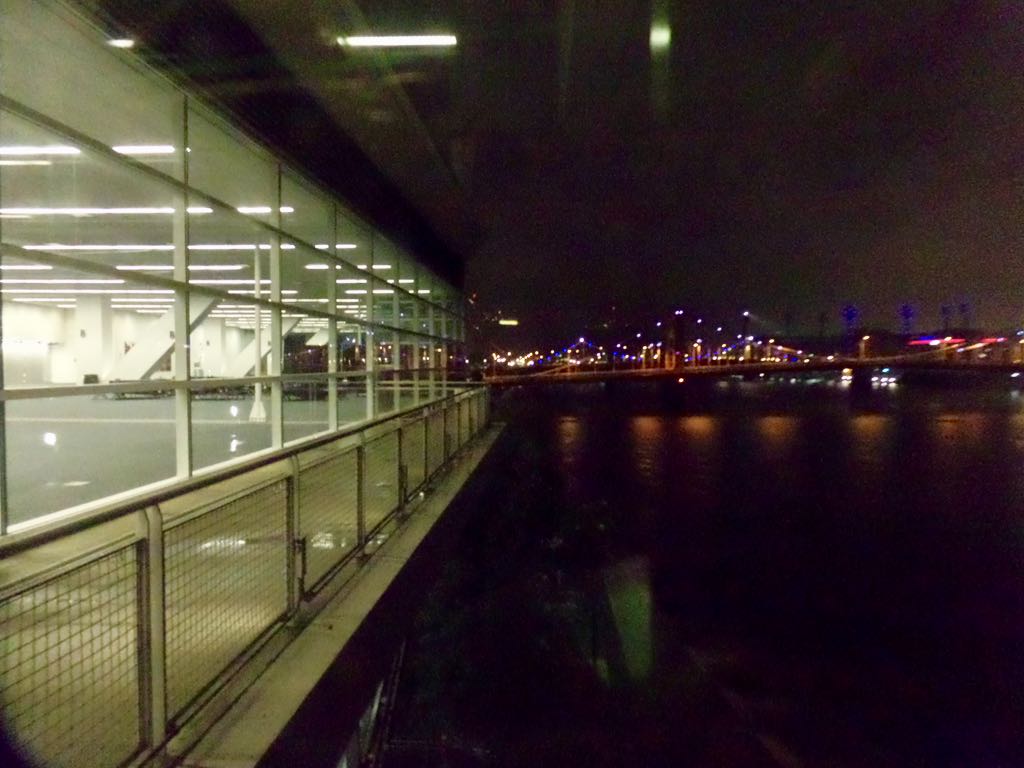 Nighttime. After a long day playing and, for me, never leaving the one convention hall except to go to the attached bathrooms, the balcony outside seemed impossibly huge. 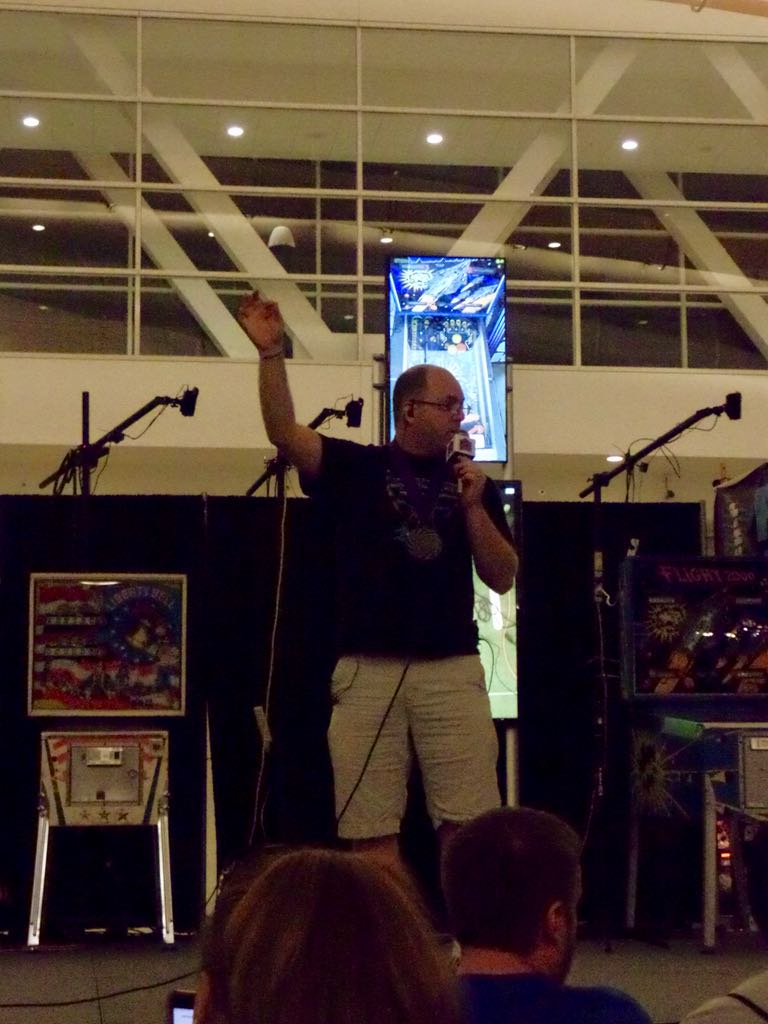 Closing announcements! Mostly regarding playoffs and tiebreakers to see who would go to finals the next day and in what seeding.

bunny_hugger finished top 16 in the D Division, and so would get a first-round bye. 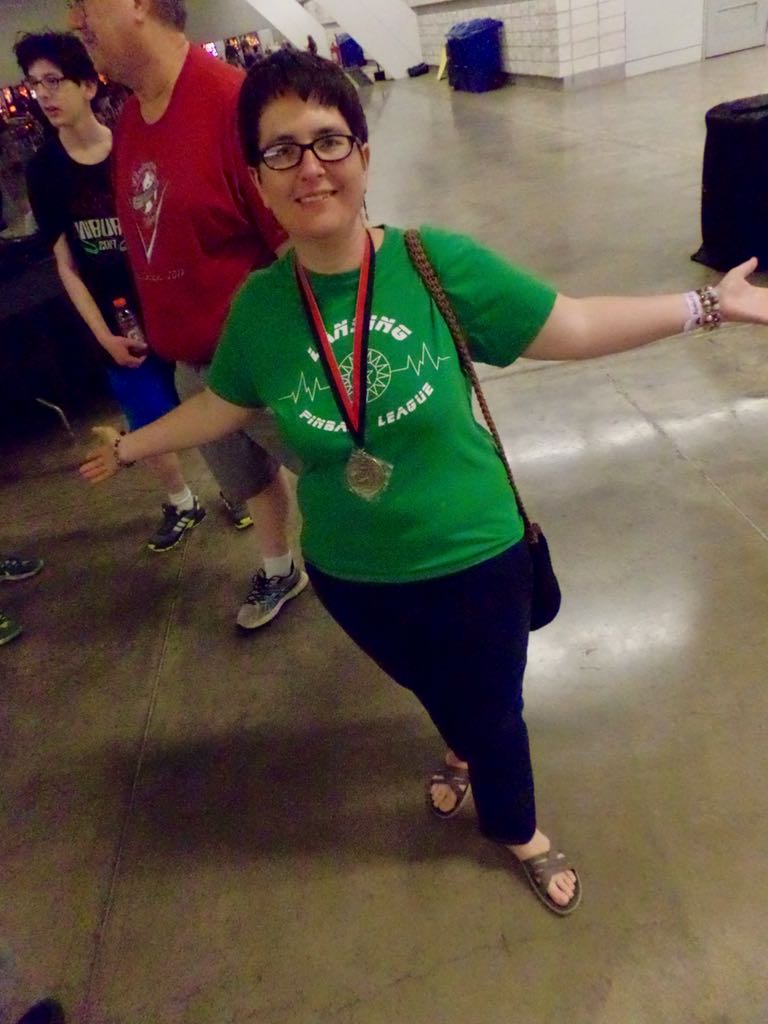 bunny_hugger showing off the medal she earned for her perfect round. 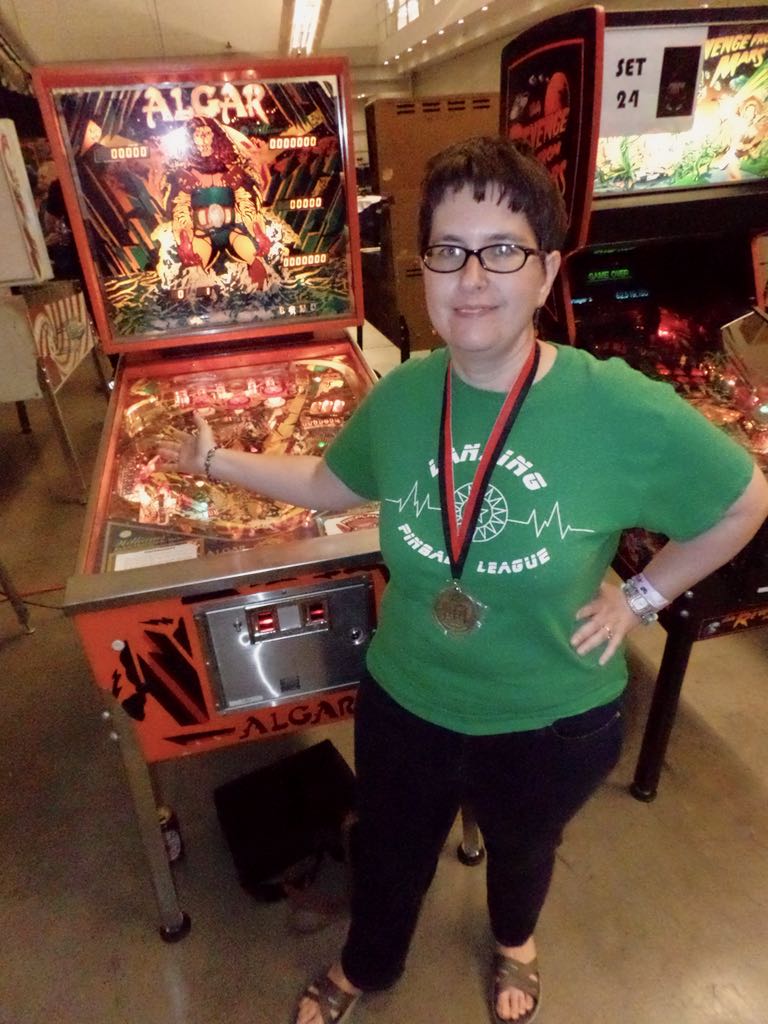 bunny_hugger returning to the scene of her triumph, where she beat all comers on a game its designers thought of as a companion to Gorgar despite being different in like every way.

Trivia: The `cellar' at which the Gunpowder Plotters stockpiled their powder was at ground level, with convenient access to the Thames. Source: Gunpowder: Alchemy, Bombards, and Pyrotechnics: The History Of The Explosive That Changed The World, Jack Kelly.