To each house we go

We walked towards the front of the park, through the Frontier Trail which in past years had been a steampunk-themed walk-through haunted performance area. No more. Apparently steampunk has passed. They had a Haunted Barnyard Or Something theme, with Frontier Trail people dressed as monsters and I'll admit we were so focused on ourselves I don't think I even noticed the thing the first time through.

But we found the most important thing, the Cupzilla grease truck with the Korean barbecue. It's got really really good tofu-and-noodles and spices. We brought it over to one of the Coke Freestyle machine stations and answered people who wanted to know where we got that since it smelled so great. With food and drink we went into the Colosseum, to eat in comfort and in sight of ... the ... pinball ... machines ...

Which weren't there. The whole back row of games, mostly 1970s tables that had been at the park forever, was gone. Nothing but empty space there. Even the two Hercules tables, giant-sized slow pinballs set for the amusement park trade, were gone. The tables had been in increasingly bad shape --- the last time we played them, two months ago, in our visit with MWS only the Pioneer and the Hercules tables even worked --- and some had vanished, but this was something else. They all disappeared, all at once. A bunch of the mechanical attractions, strength-testers and love-provers and the like, were also gone.

We took photographs. The next morning posted pictures of what we termed the Cedar Point Pinball Massacre, until we heard about the law-abiding gun owner in Pittsburgh who decided to stop abiding and instead share his Republican ideals with his victims. I deleted my tweet about that quickly.

Still, the pinball machines. We thought we might know what happened to at least one of them: the guy who runs the pinball league at Marvin's Marvellous Mechanical Museum had mentioned about two months ago he bought an Abracadabra. One of the games Cedar Point lost since about two months ago was a severely worn out Abracadabra. We asked. No; that was coincidence. Cedar Point apparently did auction off the games, though, and we have no idea to whom. But at least this suggests the games went to people who appreciate pinball and that's something.

We did circle the colosseum, to see if any pinball games survived or if they moved or if any new games were put in. No, but we did verify their vintage, full-size Skee-Ball alleys were still in. We also went to play Whac-a-Mole, with some of the ancient machines still working, although they didn't give out tickets.

Now it was after 10 pm. We had missed the Kiddie Kingdom Carousel. We did venture out to Blue Streak, which was running and had very little line and I think this is the ride where an operator recognized

bunny_hugger's Stitch kigurumi but as a hat. Next to the lone wooden roller coaster is ValRavn, the dive coaster, and we noticed that one reported a line of about 15 minutes. It was maybe a bit longer than that, but still, pretty good short wait time. We had a back-row seat. It's not the best view --- the point of a dive coaster is being held at the top of a vertical drop, facing down, and the back seat is more nearly horizontal --- but it might be a better ride. You sit waiting, in suspense, at the top of the ride and have the chance to appreciate the scenery before suddenly plummeting.

Now we went to the back of the park, where the line for Steel Vengeance was on the sign as 3/4-hour. But that's the smallest increment their sign can show. The park seemed fairly empty ... we figured this was our best shot at it. The park employees at the entrance asked if we had cell phones on us and we answered, honestly, no. We had cameras, but those weren't phones. But you're not allowed to have a phone in the ride queue. This to make sure people don't take phones out during the ride, which is intense and full of abrupt changes of direction. They don't pat you down or anything, but they do ask you up front and have people walking the queues to make sure any phones taken out are put in lockers. The same would probably apply to our actual cameras. Which is a shame, as the wait area has a lot of signs talking about the characters and background story they've created for this area of Frontier Town. Steel Vengeance is a roller coaster that comes with backstory, and it'd be nice to get down just what the backstory is. But this is how Steel Vengeance came to be one of the rare roller coasters we've ridden more at night than during the day.

bunny_hugger's mother knitted me a roller-coaster-riding hat. It's a regular cap, yes, but it has long straps that can be tied under the chin.

bunny_hugger's had one for a year-plus now and it's great: all the enjoyment of riding a roller coaster in the fall, without your ears being chewed up by the wind. I did not forget to bring my hat. What I did, though, was feel horrifically unsure that my feeble knot was going to actually keep it on my head. This was nerve-wracking enough for Blue Streak, which is a relatively gentle ride of hills and valleys. ValRavn made me nervous and I kept putting a hand on my hat. For Steel Vengeance I was terrified the hat would blow off, so I tied it tight enough I couldn't get it off later. And trying to hold the hat on encouraged it to slip forward, covering my eyes and if anything making it more likely to slip off. (It didn't.) But the ride photo for this, and for all my roller coaster rides through about Saturday, would be this hilarious thing of me, but with a red knitted cap of a face and what of my mouth you can make out looking nervous instead.

To our wonder we finished Steel Vengeance --- a great ride, certainly the most intense of the steel roller coasters there --- before the park's close at midnight. So we went to Maverick, which always has an enormous line during the normal season. The wait for this roller coaster was only about twenty minutes, time enough for

bunny_hugger to notice a bit of theming left over from White Water Landing, the log flume ride torn down to put up this roller coaster. Also for the park to officially close. We waited for a front-seat ride, since it seemed likely to be our only ride on it this season. We got lucky, too: they declared they were only running three more train cycles when we were in position to ride the second of those. So we got nearly the last ride of the night, in the front seat. Great fun even if I did shove my hat into my face again. Some of the lighting in the ride's tunnel was working now, too, which makes the experience more fun.

With the park closed we walked back to the hotel. Not too fast; no reason to hurry, since we weren't that cold, and the puddles on the sidewalk meant that everywhere we looked was this beautiful complicated play of light and color and dark. It was a really good end for the night.

Trivia: After the elections of 1863 the number of anti-administration representatives in the Confederate House of Representatives rose from 26 to 41 out of 106 districts; in the Senate, from 11 to 26, out of 26 members. Source: The Confederate Nation, 1861 - 1865, Emory M Thomas.

Currently Reading: Popeye, Editor Mike Higgs. Some kind of review of Popeye's place in the pop culture, published around 1989, when he had left it. Some overlap with the Bud Sagendorf Popeye: The First 50 Years book so important to me and

bunny_hugger, but not entirely. Also some weird casual bits where the writer didn't care enough about something he was sneering at to get its points right. Bad form.

PS: How October 2018 Treated My Mathematics Blog, the easiest yet most tedious post to write all month!

PPS: Now to look at the third day of Pinburgh 2017, when playoffs happened. 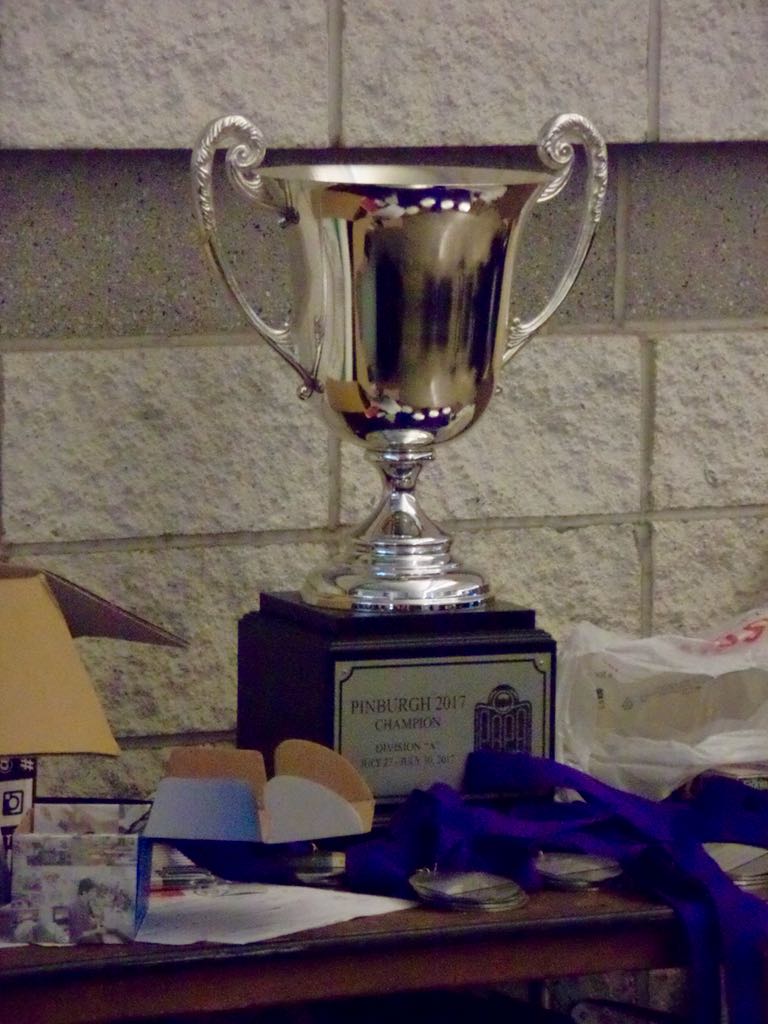 Why we play: the trophy for first place, A Division, for Pinburgh 2017. Also around it are some of the medals given out to those who finish top four in the lesser divisions. 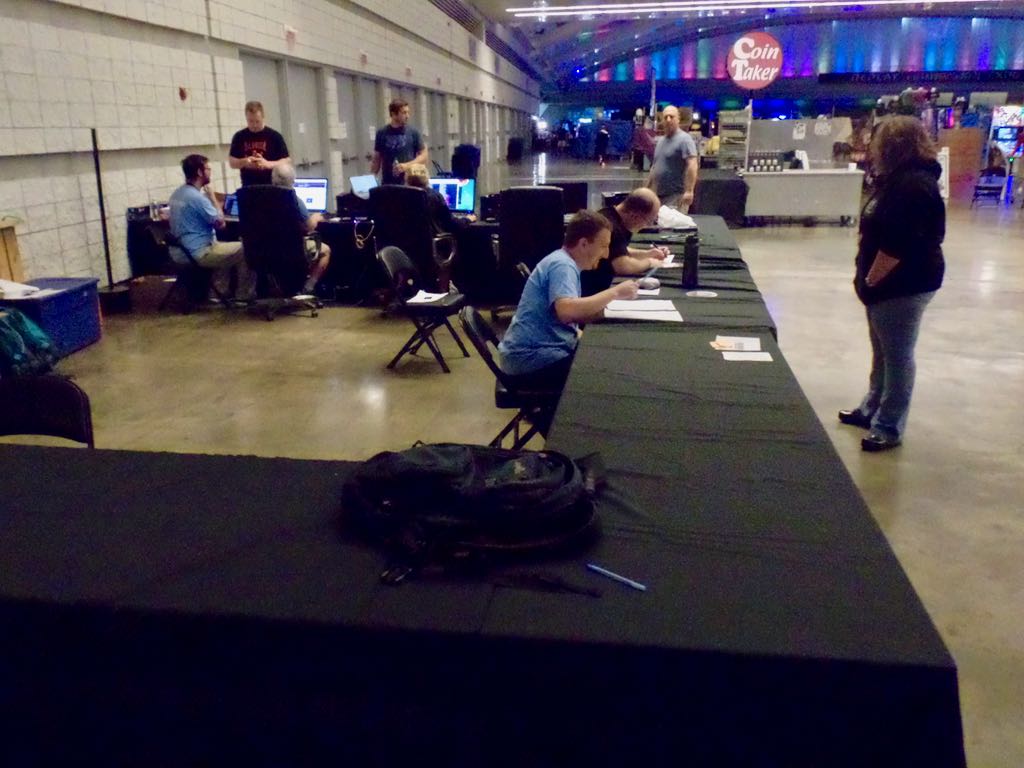 People checking in for the playoffs, Day Three. Not many yet, but we were there early because we were in the playoffs for Pinburgh how could we dare miss that? 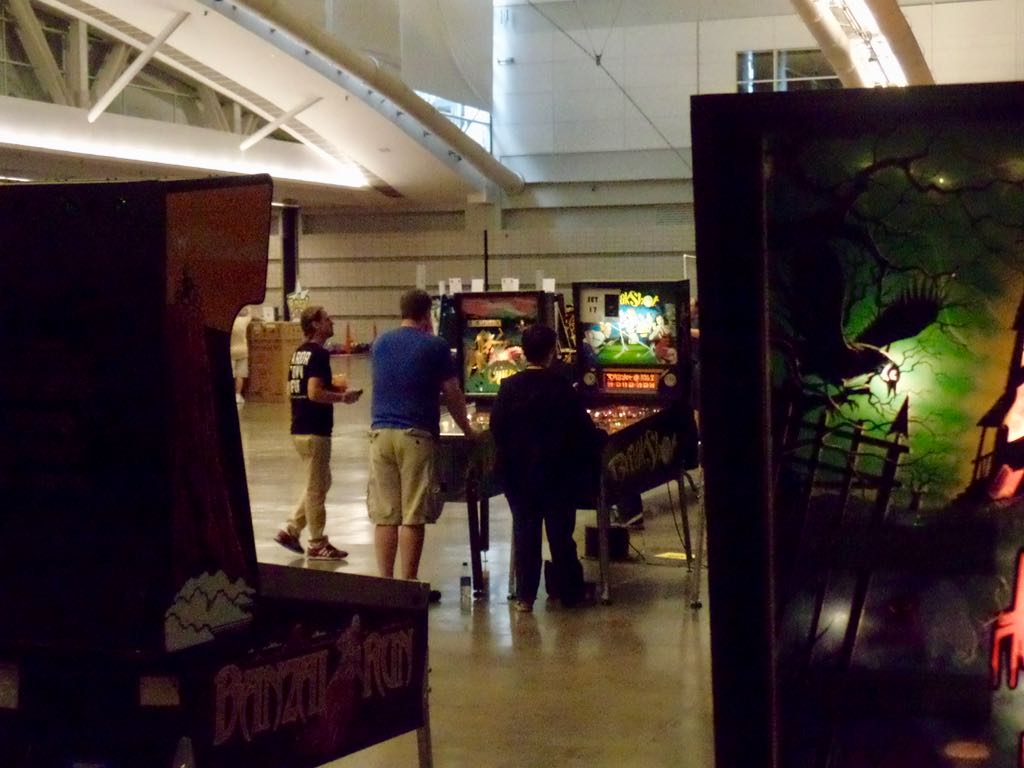 bunny_hugger getting in a little practice on the pool-and-casual-sexist-joke themed Breakshot. Our pinball bestie MWS is beside her there.