Laughing all the way

Saturday at Cedar Point we started by leaving Cedar Point. We always visit the Merry-Go-Round Museum in downtown Sandusky. Since everywhere to eat in downtown Sandusky closes at about 11:15 am in 1984, we didn't go downtown to eat. We went to Route 250, and the start of the strip mall district, to eat at Jolly Donuts. It's a real proper little diner that, we overheard a waitress saying, was actually a railroad-car diner. They'd found a picture of it being wheeled into place fifty years ago. Which is neat but also seems late in the game for a railroad-car diner. Maybe it was relocated? Besides lunch we also got a couple of the very few doughnuts they had left (they were near closing), to be a snack for the next morning.

And then we drove away from the Merry-Go-Round Museum, to the nearest Meijer's. We figured we could get needed motion sickness pills from them (we could) and also a cheap scarf

bunny_hugger might use for the weekend (we could not). So we went to the Sandusky Mall, where they had a JC Penny's and, ultimately, a scarf that seemed all right. Also more expensive than

bunny_hugger thought she could get at CVS, which we knew was near the Merry-Go-Round Museum. I proposed we get this and, if CVS had a cheaper one, fine, return this scarf at the Penny's near us. CVS had scarves, although not so much cheaper than this. Also motion sickness pills, so, time-wise, we'd have been better off skipping Meijer's and Penny's altogether. Well, we also picked up some canned chilled coffee and pop, to take back to the hotel room. This revealed to the CVS cashier and some friends there that they make Diet Coke with weird flavors now like Blood Orange and Death Cherry and some other stuff I can't get quite right, so, glad to bring them that joy.

Ah, but the Merry-Go-Round Museum. That was ... surprisingly busy! There was a pack of maybe two dozen people there. We weren't clear on exactly what was going on. But there was some kind of special event going on in the evening. As we wandered around they were setting up tables with two layers of tablecloth. And the woman in the gift shop, who somehow remembered(?!!) that we were from Michigan asked if we were there for the Spartan baseball event at the sports complex Cedar Point owns. While we understood each of the individual words in that sentence their combination was beyond us, and we explained we were just there for Halloweekends and our annual visit to the museum.

The size of the crowd brought benefits. We could overhear the docent explaining the museum exhibits and appreciate the thrill of people learning cool stuff about carousels, and new-learning energy is always great. Also this was the first time we've ridden the carousel they have --- nearly all animals that they've carved --- when it was nearly full. It's nice to have a carousel to yourself, but to have people everywhere? That's also wonderful.

For the nearly-full ride the band organ played the Alfred Hitchcock Presents theme. The docent asked if we recognized it, and sure, but what we didn't recognize is that it was actually a classical piece, the Funeral March of a Marionette. The band organ there is set up, for October, to play Halloween-ish themes and so we have rarely heard it playing normal carousel music. We did stick around for another ride and wondered what it would play that time around. Some of the choices are good music for this, like the theme to The Addams Family. Some are a bit of a stretch but makes sense like Chopin's Funeral March. (It might not be Chopin's. But it's a funeral march at least as good.) What we did hear? The theme to Batman '66. The Halloween connection is vague. It's also kind of a dumb band organ tune. It gets musically interesting in the stuff that isn't the na-na-na-na-na-na-na-na part everyone remembers. You know that thing where sitcom music gets padded out with a middle section so that it can maybe get airplay. I'm not saying the added section is the best part, since na-na-na-na is so infectious and gleeful. But it's better band-organ music. And they did do some clever arrangement to try to get the feel of the song given the constraints of how a band organ plays.

The Merry-Go-Round Museum has had some reorganization since we visited it last. Some things were off exhibit. New things were moved in, though, so the museum doesn't look any less full. They've currently got exhibits organized much more strongly by theme, so that, for example, there's a whole stand of nothing but deers. I'm not sure whether that's a better organization or whether it's just different. They've also moved to putting the explanatory panels on free-standing plastic mounts, rather than painting them onto the walls or display shelves, so that it should be easier to reorganize exhibits as fashions change.

What does seem diminished is the gift shop. No carousel music CDs this time around, for example. And no carousel calendar for 2019, although nobody has printed one of those in years. They had older calendars though, including one from (I think) 2008 sitting unopened. They did have some new Christmas ornaments, tempting

bunny_hugger successfully. We put in our traditional 18 entries to try to win the horse they're raffling off this year. (They're a dollar each, 6 for $5, so

bunny_hugger buys ten dollars' worth and I buy five dollars'.) And we learned why last year's raffle horse was still at the museum: one of the carvers won it, and decided to leave it at the museum where it could be shown. I'm not saying we'd do that, were we to win. But it would solve the problem of transporting it from Sandusky, at least.

This took us until pretty near 4 pm, when they closed and when they were setting up for the night's event. So we headed out, stopped at CVS as mentioned above, and then went back to the Hotel Breakers to figure out our night at Cedar Point and just how warm we would need to dress.

PS: Reading the Comics, October 30, 2018: I Spot An Error Edition in a comics post with a bunch of new tags.

PPS: Discovering in finer detail what would wait for us in Pinburgh 2017 finals. 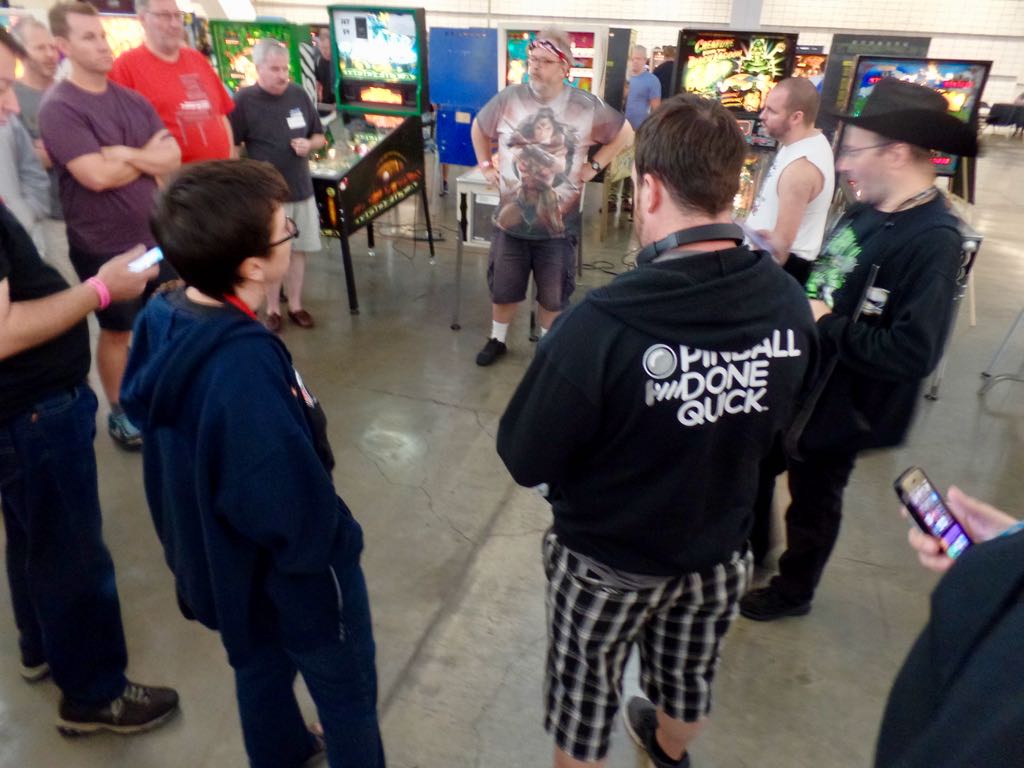 bunny_hugger with the other 23 competitors in the second round of playoffs, listening to her instructions and group assignment and all. 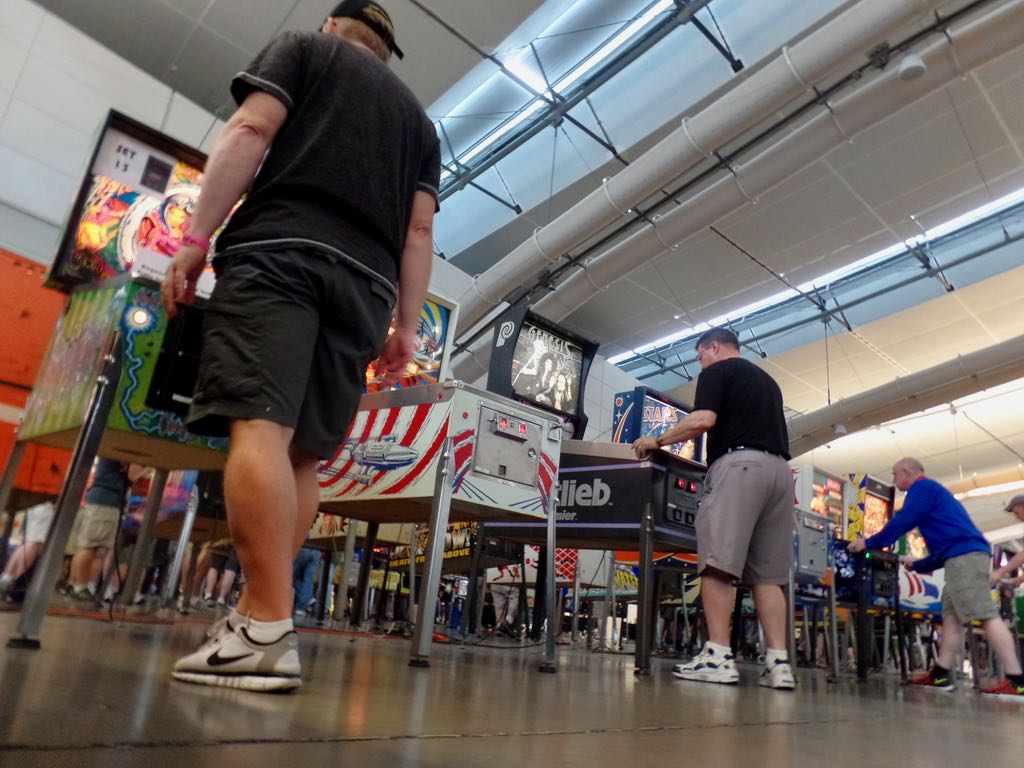 Play! There were six groups playing, on the three banks of machines. The first four games on the left are the ones I'd spend three rounds playing, by my choice. 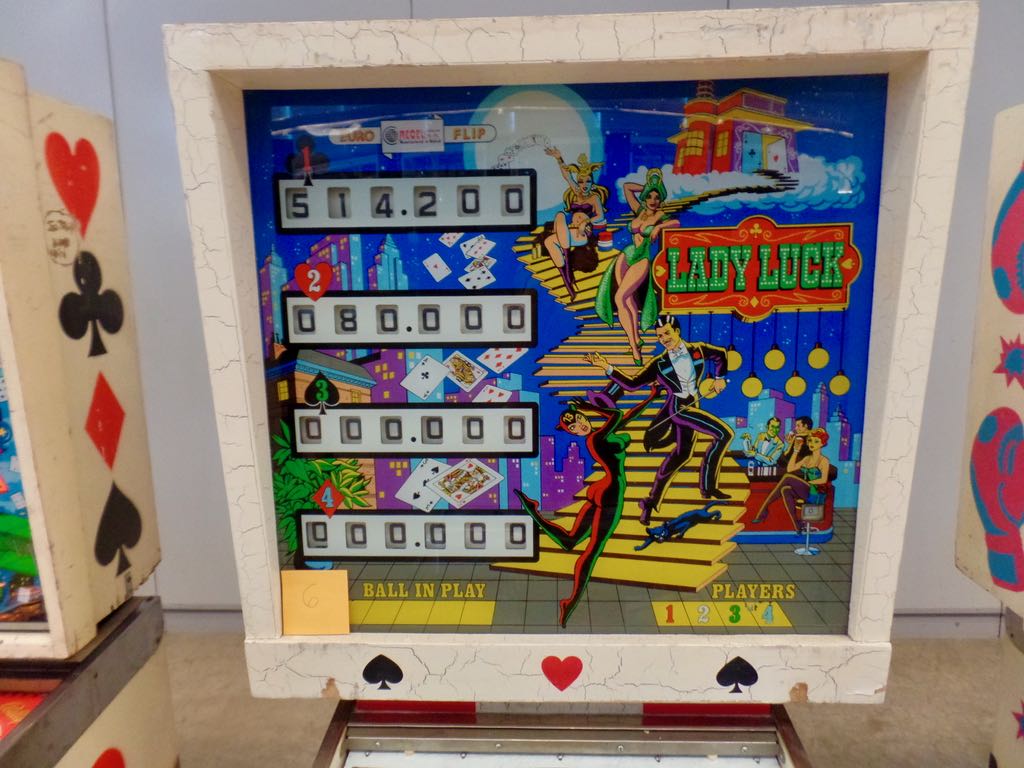 Meanwhile I wasn't needed anywhere, so I looked at other stuff around. Here's a pretty fun-looking backglass with improbably-dressed women and after a bit of a lopsided match. But this era of game, especially from a European game maker, could have wildly unpredictable scores.