By the time we were back to our hotel, and feeling warmed up, and had got some necessary work done, it was already twilight. We thought about eating in one of the handful of enclosed restaurants, but also thought we should maybe let the crowd thin, possibly in the drizzling rain. But then indoor restaurants would be crowded too. We took a chance, trying the Raptor roller coaster, and waited through a line that occasionally got rained on, and that took just long enough to worry us that we'd miss one of the indoor shows.

We do like getting to shows, not just because they're indoors and dry when the weather gets bad. The one we went to, and got to within a minute of its starting, was the Midnight Syndicate. They do spooky-sounding music, along with these strange, eerie performances. Last year, for example, the show set up that there had been supernatural events happening and the Sandusky Paranormal Researchers Society was investigating. So while they played music people in Dopey TV Paranormal Reality Show outfits prowled around and unleashed some ghosts or demons or stuff. This year they acknowledge that (and past performances) as some strange things of past years. The performance this year included video of a guy working out the meaning of occult symbols, also shown on the actual performing stage, and getting obsessed with and haunted by ghosts of Cedar Point amusement-park-goers of ages ago. And racing to the theater we were in, ultimately pounding the door and racing inside while ghosts pursued him. It's a fun performance with a nice blend of music and fourth-wall-breaking tricks.

Since we were up front we went to the carousels next.

bunny_hugger thought to make it a point to try to ride every mount on the Michigan's Adventure carousel, a modern fiberglass construct like ones at many parks. But it was natural to extend that to Cedar Point's three carousels. We made more visits to both the Midway and the Kiddie Kingdom Carousel than we might ordinarily make thanks to this project. And I guess I'm part of it too, since I normally sit beside her.

The project seemed stalled by the upsetting sight of the third carousel. That's Cedar Downs, the racing carousel. It actually goes fast, and each file of horses can move forward or back relative to each other. But Cedar Downs wasn't running. There was no ride operator, the lights were off, the ride looked abandoned.

bunny_hugger feared the ride was closed for the season, since if it were something so bad they weren't going to fix it Saturday, why would they fix it for the final, eight-hour, day of the season? I didn't think that likely, but I never think that sort of thing likely, even though it would make perfect sense if exactly that happened.

Now it was late enough we figured to eat. We went to Melt, an indoor restaurant near one of the kiddie playland areas. It used to be the Joe Cool Cafe, and before that a macaroni-and-cheese place, and so on. Apparently Melt is a regional chain of fat-sandwich-based diners. Our server warned us that the macaroni-and-cheese sandwiches we were ordering were quite large. We did not understand what she meant. She meant that they sliced out a cubic yard of baked macaroni and cheese, breaded the outside, deep-fried that, slathered it with any kind of extra cheese you wanted, and then put it between two slices of bread, and then brought it to your table, using a Ford F-350 to manage final delivery. So this was maybe too much for us to eat, even given how much walking around we'd be doing. But it was awfully filling.

Anyway the real appeal of Melt wasn't the food. Cedar Point, it turns out, has saved many of the signs and posters and bits of decoration from past incarnations. Some of it is in the Town Hall Museum. Much of it --- especially, much of it from the 80s and 90s,

bunny_hugger's formative years --- is here. Before about 2000, Cedar Point's ``you must be this tall'' signs included custom-made characters warning you in word balloons and holding out a hand or a sword or a tail or something to say how tall you must be. Several of them are set out as wall decorations. More are shown in picture form, as concept art got printed out and colored and framed. There's more, too. Old promotional art, like art for the Magnum roller coaster showing the ride far above the sky in a pose reminiscent of the backglass of the Comet pinball game. Obsolete signs from shops or attractions that have changed names. A complete park map from sometime around 1965, including the interesting item that Blue Streak (then their only roller coaster) was named just ``Roller Coaster'' on the map. We could have spent hours there just looking at the graphic design evolution of Cedar Point.

Also on a TV there I noticed a campaign ad. It promised that if the Americans took back the House of Representatives, the Democratic Party would obstruct Trump's agenda, allow asylum-seekers, have the government take over health care, raise taxes, launch investigations of the future Disgraced Former President, and maybe even start impeachment proceedings. And the crazy thing is the Republican Party paid for this! Anyway, in my local Congressional district the Vichies lost --- to my great surprise --- so I'm looking forward to calling my new Representative to ask how she's doing living up to those promises.

When we were finished, and full, it was already 10 pm. But the drizzle had mostly stopped, and it had been cold enough that people were leaving the park. This made for good riding chances, with short lines. We tried to go to Gemini, but found that roller coaster closed. We got back to Corkscrew, our old friend. And we decided to brave Millennium Force. We'd feared the seat belts, given the experience at the Mine Ride. And having eaten an estimated 22,874 pounds of fried macaroni and cheese two hours earlier. But it was all right: sitting up carefully, and with jackets unzipped, we were able to fit our seat belts on and snap the restraints into place. Millennium Force is a fast and exciting ride and it's great at night, giving a fantastic view of the whole point lit up. And we could get a few quick looks at where the dinosaur animatronics had been, but no clear idea of what was there, or what was going in there.

Also remarkably, Millennium Force had a short enough line we could get one further ride in. We dashed over to Iron Dragon, waiting for the front-seat ride on what turned out to be the last right of the night. Iron Dragon's always a good night ride and there is that extra little thrill in being on the final ride for the day.

On the way back we stopped in the Sweet Shop, which hadn't quite closed. We got some fudge for

bunny_hugger's father, consolation for my screwing up our getting any when we passed through Mackinaw City in August. Also in the adjacent Snoopy Place store,

bunny_hugger mentioned how in the old days when Cedar Point had the Berenstain Bears license there was the Bears' Treehouse as a performance spot inside that building. And we realized, oh, that's got to be it still there. It's relabelled the Daisy Hill Puppy Farm, because kids don't know what a puppy farm is, and it's got T-shirts and sweatpants and stuff like everything else in the shop has. But that's got to be just barely touched from Berenstain Bears days.

We got back to the hotel room, and it seemed quiet enough. And it did stay quiet enough through the morning, glad to say. We could have as well-rested a final day of the amusement park season as possible.

Trivia: After the discovery of Pluto it was found to have been photographed, but unnoticed, by the Mount Wilson observatory in 1919 and, faintly, by the Lowell Observatory in 1915. Source: In Search Of Planet Vulcan: The Ghost in Newton's Clockwork Universe, Richard Baum, William Sheehan.

Currently Reading: Lum and Abner: Rural America and the Golden Age of Radio, Randal L Hall. The book is copyright 2007, but mine is the first stamp on the check-out page and the book seems un-used. (The university library sticks to stamping.) I can't find the acquisition date but I'm really hoping it's only been in the library for a couple months. Eleven years is a heck of a wait for something to be taken out.

PS: My 2018 Mathematics A To Z: Nearest Neighbor Model, which comes as close to my actual area of expertise than anything I've ever written, if I'm not mistaken.

PPS: Drawing closer to the big moment when I got to play and faced three rounds of the highest-stake pinball I've experienced. 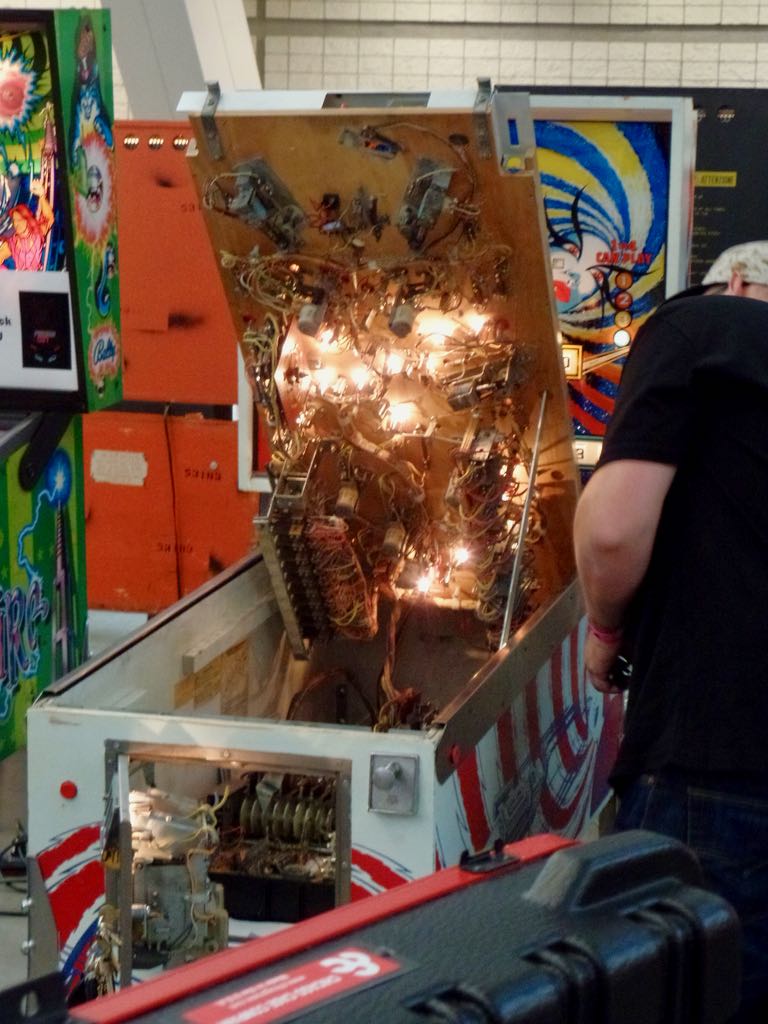 More repairs! For once it's not Cirqus Voltaire that needs the help. Note the metal bar, set on a hinge on the main cabinet, that fits into a circular hole on the underside of the raised playfield. Yeah, it's held up just like the hood of your car. 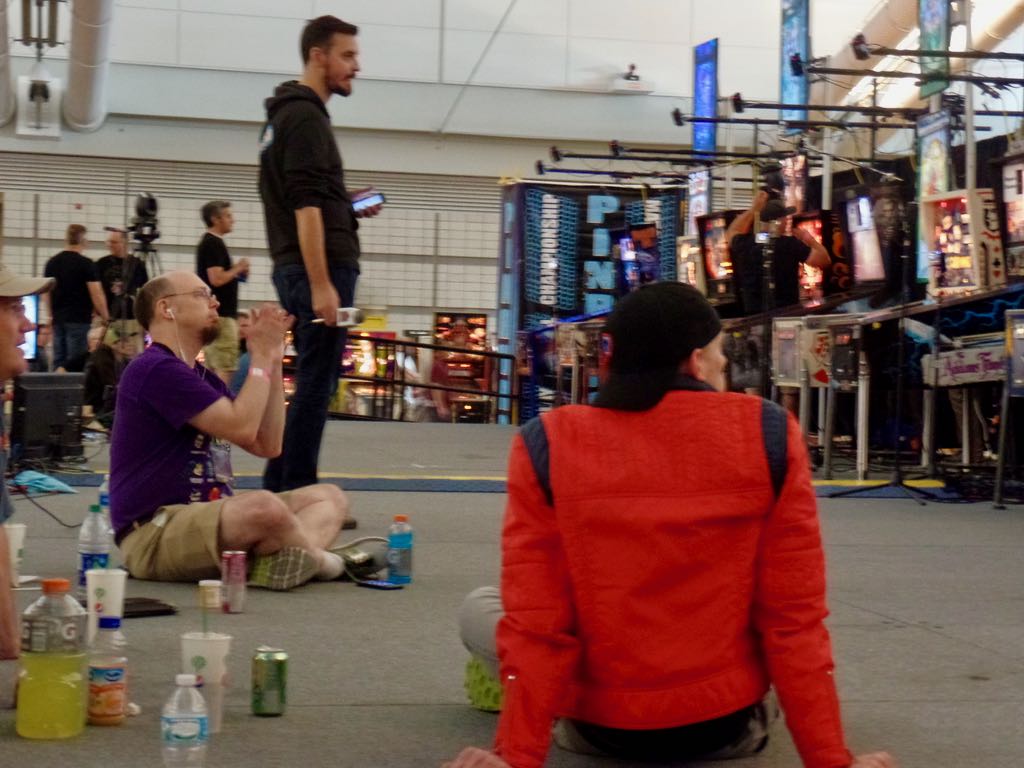 Meanwhile, looking over at the A Division finals, which can't possibly have got organized yet if people are just camping on stage with a lot of things that could spill on their carpet. 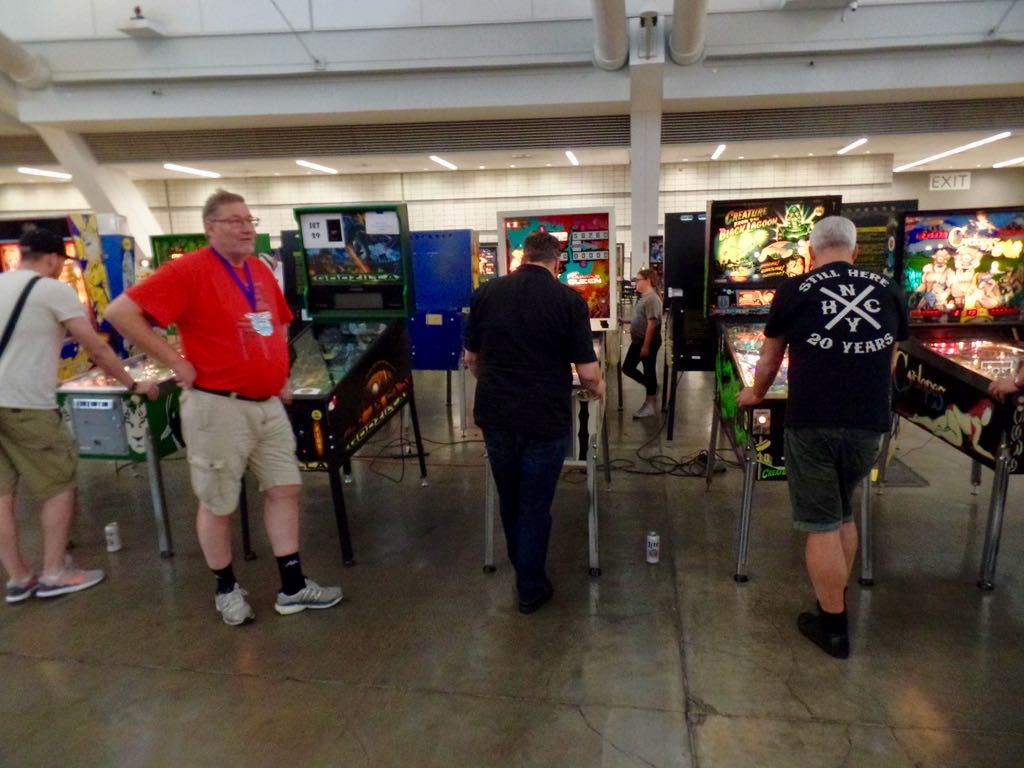 Finals back under way. Note that Jungle Queen being played in the center. It'll come back to me.