I woke up first, as usual, Sunday. As

bunny_hugger got the day organized I packed up what I could and moved it to our car. We had a couple doughnuts from Jolly Donuts, left from the day before.

bunny_hugger had the good thought to go to the Starbucks in the hotel before it closed for the season. Which they turned out to be doing for 11:30, a half-hour after checkout. Last year they'd closed at 11 and she had been sour about where to get coffee in the park on a Sunday morning. (That would be the one Starbucks inside the park, overwhelmed by people with the same idea.) We got our room cleaned out. And, having learned from our experience last year, we left the car as near the hotel exit, rather than the beach exit, as possible, so we'd have as short a walk as possible when the day ended.

Which we were emotionally prepared to make sometime before the park actually closed. It was continuing to threaten rain and we had agreed that it would be ridiculous to spend another day in pouring, freezing rain just for one last ride on Wicked Twister or something. We didn't end up leaving early, since the rain never quite got that bad. But we were prepared for it. For example, right after we entered, we noticed that Top Thrill Dragster was, against its reputation, running. And it had a not-bad half-hour queue. But then it started to drizzle and we figured, you know, we don't like the ride enough to get accelerated to 120 mph in the rain. If it even kept running in the rain; the ride, which goes up 400 feet, is very sensitive to any kind of wind. So we left. I think correctly; it was raining a bit harder about when we would have got to the launch station.

We decided to use the early hours to check out shops. They've carried retro T-shirts for some vanished rides, for example Disaster Transport. But they had run out of the size

bunny_hugger wanted, and they were still out of that. We also thought to get a retro Fascination t-shirt for MWS, who loved that game when it was at the park. But they were out of his size, also. Last day of the season, you know?

After another round of Kiddie Kingdom carousel rides we went to the Frontier Trail, which has candle shops and gemstones and woodworking and all that. We got to an interesting but also inescapable conversation with the woodworker, who also volunteers at the Merry-Go-Round Museum.

bunny_hugger was intersted in a carousel horse they had, in the working area. It looked extremely well-worn, and also like it had maybe been dropped from a spaceship and reassembled by people who hadn't ever seen a horse before. All cracks and nails and metal straps holding it together. We wanted to know more of it, but all the woodworker knew was what

bunny_hugger was able to spot. It seems to be a C J Parker horse. Probably carved around 1910. And used just forever. You can see not just where metal straps were put in place to hold the thing together, but that the metal straps were then worn down by subsequent riders. Also a lot of paint, and a lot of paint scraped off, possibly by someone who realized they were in way over their head trying to strip and re-finish this. Great talking with him about it, and about carousels and carousel-carving. He allowed that he might not be as good as the great carvers of the Golden Age, but that he was the person you turn to for a preservation and restoration job as difficult as this.

He also volunteered a great answer for the Ship of Theseus Problem. Said that the rule of thumb in museums is that if you can't keep about 80% of the original material in a thing then your restoration is destroying the thing's value as an artefact. So, it's nice to have some numbers on that. I look forward to using this the next time I'm pulled into an argument on whether the Star Trek transporters are murder.

Cedar Point has added jack-o-lantern decorations for Halloween for several years now. They've mostly been plastic. This year we saw ones that were real carved pumpkins. Several of them were set up outside the woodworking shop, and were in advanced states of decay from age and squirrel attacks. A woman sitting on the covered porch by the woodworker's pointed to these sad, crumpling pumpkins and said, ``They look like I feel''. But she also said she remembered, even this chilly, rainy day at Cedar Point was a day at Cedar Point, and so much better than a day at work or something would be. Good attitude.

We visited the shops we always like to. Particularly this china shop run by an elderly German woman. It's a lot of ceramics with mottos like 'If you want the best seat in the house, move the dog' or 'Mom is a short word for miracle', that kind of thing. Also some fine art, ornaments with great detailed illustrations of wildlife and such. It turns out the woman paints those herself too. We had just assumed these more finely-detailed elaborate things were brought in from an outside supplier.

bunny_hugger bought something, as she always does, partly from liking it, partly from not wanting this spot, which feels like it belongs in an amusement park of the 30s full of independent concessionaires and making attempts at looking respectable and artistic, to vanish unnoticed.

We spent a good while in the candle shop, admiring the figures but not quite getting any. Similarly the glassworks shop, which reminded us there was a glass-blowing demonstration starting in minutes. A nice thought but we figured the best use of our time was, since we'd finished souvenir-shopping, to stow everything, then get some lunch, and get in position for the Halloweekends Parade.

Trivia: Winston Churchill and Charles de Gaulle together laid a wreath at Paris's Tomb of the Unkown Soldier on Armistice Day 1944. Source: 1945: The War That Never Ended, Gregor Dallas.

PPS: I didn't get any good photos while actually playing, for obvious reason. Let's zip ahead to the conclusion. 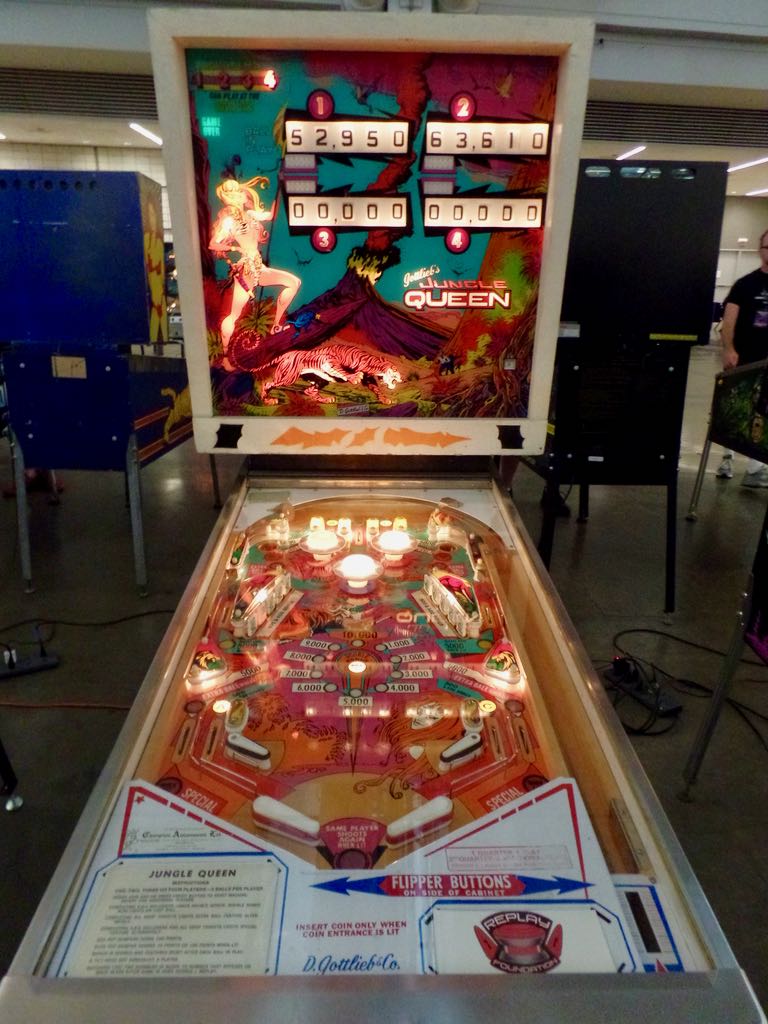 So this was the final score of the tiebreaker that determined whether I would finish D Division in first or second place. I was player 1. Before you aww, you should know that while it doesn't show, the ``100,000'' light should have been lit: my score was 152,950. Unfortunately, my opponent had also soft-rolled it; his score was 163,610, and almost all of that after his fourth ball (it's a five-ball game); he just plunged the last and collected my congratulations. 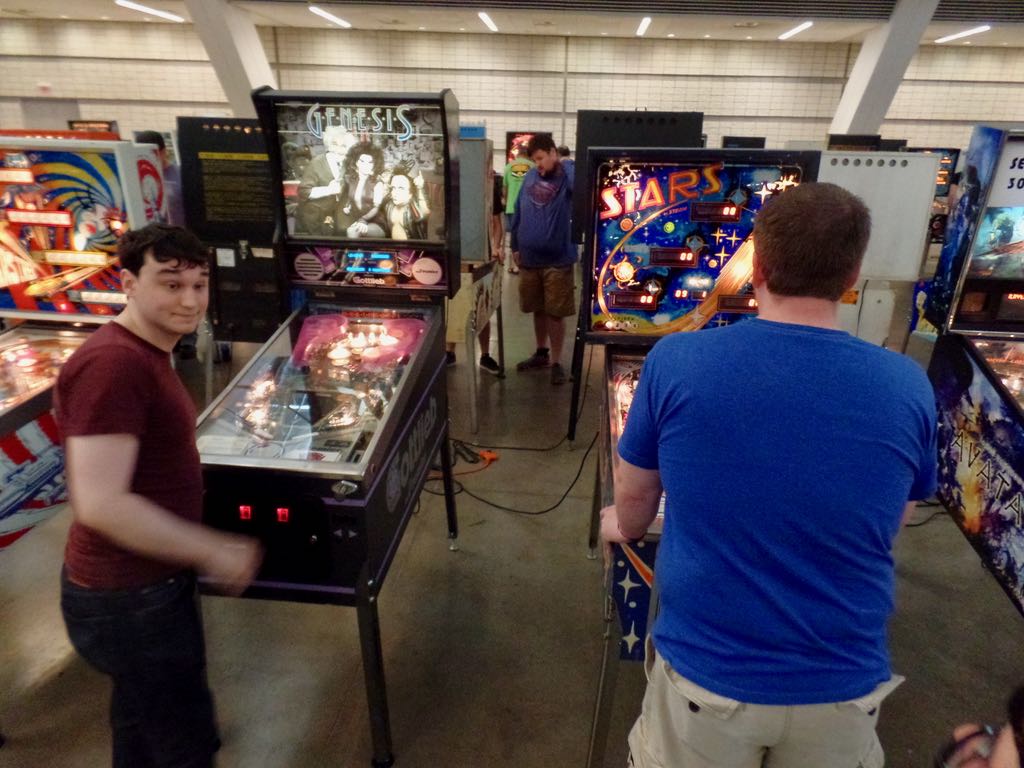 The Genesis on the left there? That was the moment of my greatest triumph during the matches, as I was able to use a little bit of rules knowledge to set up a 6x playfield multipler and multiball that, incredibly, none of my competitors knew about or were able to use. So the penultimate round I was able to use this to leap from middling to holy cow he's unbeatable in an instant of play; in the last round, I was not quite as successful, but still, put myself to where I could be in a tiebreaker for the championship. 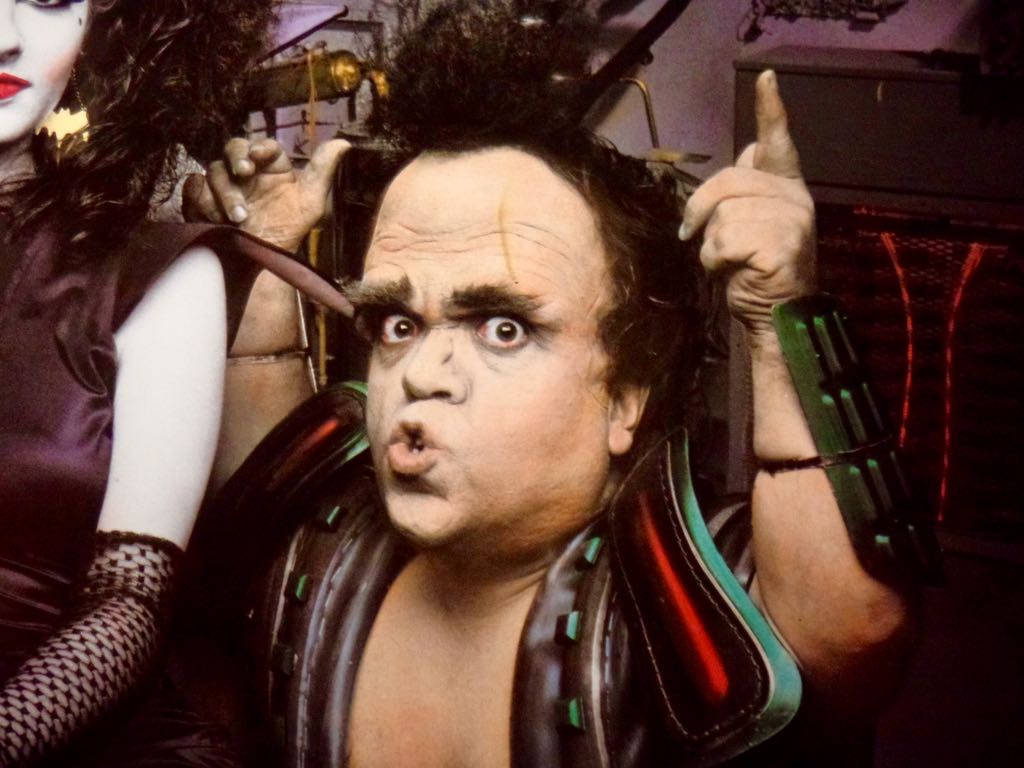 And yes, the backglass for Genesis is from the era when Gottleib Premier was going for hilarious or ugly photographs but, here, look at the detail on this guy. That is seriously committing to whatever the heck they thought they were trying to do here.