What fun it is to trick-or-treat

The Midway Buffet is close to where the Halloweekend parade either starts or ends, depending on whether it goes from front of the park to the back or the other way. And it's enclosed, and heated, making it really good on cold rainy days. Last year it had coffee; this year, no. And no creamer or sugar fixtures suggesting that this maybe wasn't because they were running out of stuff at the end of the season? But it was certainly a ``this is what's left'' buffet. For example, the centerpiece of one of the islands was the suggestion to try making loaded fries. They had fries and tater tots, and two kinds of melted cheese, and some chili sauce, and good luck to you. The other tables had even less fully matched entrees, like hot dogs with buns but no relish or sauerkraut or mustard. Could put some melted cheese on, though, if you crossed the serving tables. Anyway, we had maybe too much to eat --- enough that we didn't make one more trip to Cupzilla --- and watched the rain dwindling as people continued to leave the park.

The parade was to start at 4 pm, and we didn't know which direction it would come from. We picked a spot that the parade was scheduled to pass, and waited for signs of something happening like distant noise or security guards clearing a path. But they never came. We started wondering if the parade had been cancelled for weather. Which, since the rain had stopped by 4 pm, made this even sadder. Bad enough to rain metaphorically on our parade. But to stop raining once the work of cancelling the parade was done? That's just being mean.

We figured to walk back toward the hotel exit, though, to stow the stuff we'd bought. And since we were following the parade path, to give us a last chance to see the parade if it was just starting late or something. No luck.

They still stamp your wrist when you go out to put something in your car. Even if you have season passes, like us. Or maybe we didn't need to, but we've never dared ask if we can't just use our passes. Anyway we had green-ink Rougarou stamps on our wrists for the rest of the day. Also, at the car,

bunny_hugger discovered she did have a second, dry, pair of gloves so she had a rather more comfortable time of the next five hours in the park.

So we walked back to the front of the park, by the Buffet and the parade route and all. And found that Cedar Downs, the racing carousel, was up and running. So we diverted to that, naturally, and

bunny_hugger began the project of riding each one of those horses. This promised to be challenging since all the horses are one of four styles and they're really distinguished only by the patterns on their saddles. These patterns range from things that look like heraldic patterns --- checkboards and clovers on a green background and such --- to stuff that suggests they were painting and it was 1969 and why not do some irregular wavy line thing. We thought we had a breakthrough when we noticed

bunny_hugger's horse had a little 'Row 8' figure imprinted on the left harness. But it turns out these numbers are meaningless. We found row numbers for a couple of horses, but nothing in anything like order. Not all on the outermost row, either. We can use the Row 8 as a reference point, but only if we start out from near it, which we'd know from following the heraldic patterns anyway.

Also in that area of the park is GateKeeper, one of their modern smooth and really sweet rides. Not too intense, either; it just feels like flying. Between its really good capacity and the lightness of the remaining crowd we barely had to wait to get on the ride. ... Until we did. Because

bunny_hugger's big winter coat got bunched up behind her back. And she couldn't get up and sit back down easily because the seats are raised to high off the ground. I have to jump a bit up to fit, and I'm tall. She's short; she needs help, or time, and the ride operators weren't willing to offer either right then. We had to get off the ride and go back around (they let us cut right back in) and

bunny_hugger was ready to curl up and die from this. After the slight inflicted by Mine Ride, and the joy of Millennium Force's restraints being fine, this was a betrayal from a friend.

Not a betrayer: Wicked Twister. It's another roller coaster in that corner of the park, and one that never has a wait because it's a very short ride. It's basically twin spires, and uses a linear induction motor to move the cars from stopped up to speed so you get two climbs and falls on either tower of an upright U-shaped track. I do like the rapid acceleration from nothing --- it's the kind of motion that's the fun part of Top Thrill Dragster --- although that the ride finishes with no-less-fast braking, half of it backwards, keeps

bunny_hugger from wanting to ride it more than once a year.

Also no betrayer: Troika. We don't get to this much, and for no really good reason. It's a Scrambler-type ride, cars rotating around an axle that itself rotates. Its novelty is that the larger rotations go up at an angle from the ground, so that you're rising and falling through the ride. It's great fun. It's no mystery why Scramblers stay popular: they're a fun ride, and don't look so intimidating that little kids or mom will refuse to ride it. It's a bit of a mystery why Troikas aren't more popular. They're one of the two logical next steps up in intensity from a Scrambler, and this is one. So I don't know why there aren't more Troikas. Maybe some inexplicable twist of amusement-ride corporate history.

Trivia: Among matters needing correction after the United Kingdom's calendar reform of 1752 was that herring fishers were obliged to set out to sea and return from the fishing season eleven days earlier than intended. Source: Marking Time: The Epic Quest to Invent the Perfect Calendar, Duncan Steel.

Currently Reading: Lum and Abner: Rural America and the Golden Age of Radio, Randal L Hall. It's mostly scripts from the earliest years of the show, and written out in enough eye-dialect that it's better read slowly. Although the introductory matter, talking particularly about where writer/actors Chester Lauck and Norris Goff came from included this eyebrow-raiser: ``In 1937 Polk County [ Arkansas ]'s only black resident died.'' (This in part of discussing why black people never appeared on the show; Lauck and Goff came from the Ouachita Highlands area, and set their show in the area, and there were extremely few black people there. And, mm. Given how the typical Lum and Abner character was guileless to the point of acting dumb, and that Lauck and Goff did basically all the voices until the show converted from 15-minute daily serial to weekly 30-minute show ... I mean, it saved the show from having a major Racefail, but because of actual historical ethnic cleansing. It's not right to call that lucky.)

PS: Getting into the evening of Pinburgh 2017's Saturday here. 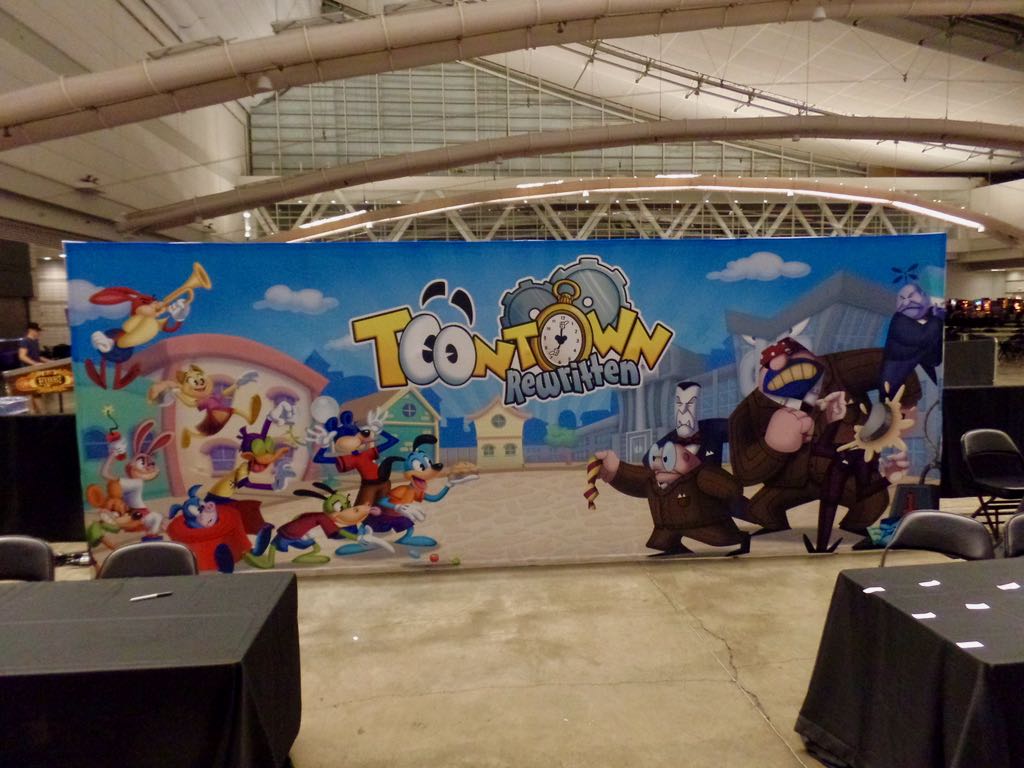 The Toontown Rewritten folks had packed up and cleared everything out, but this poster art still left me thinking it looked good, at least. 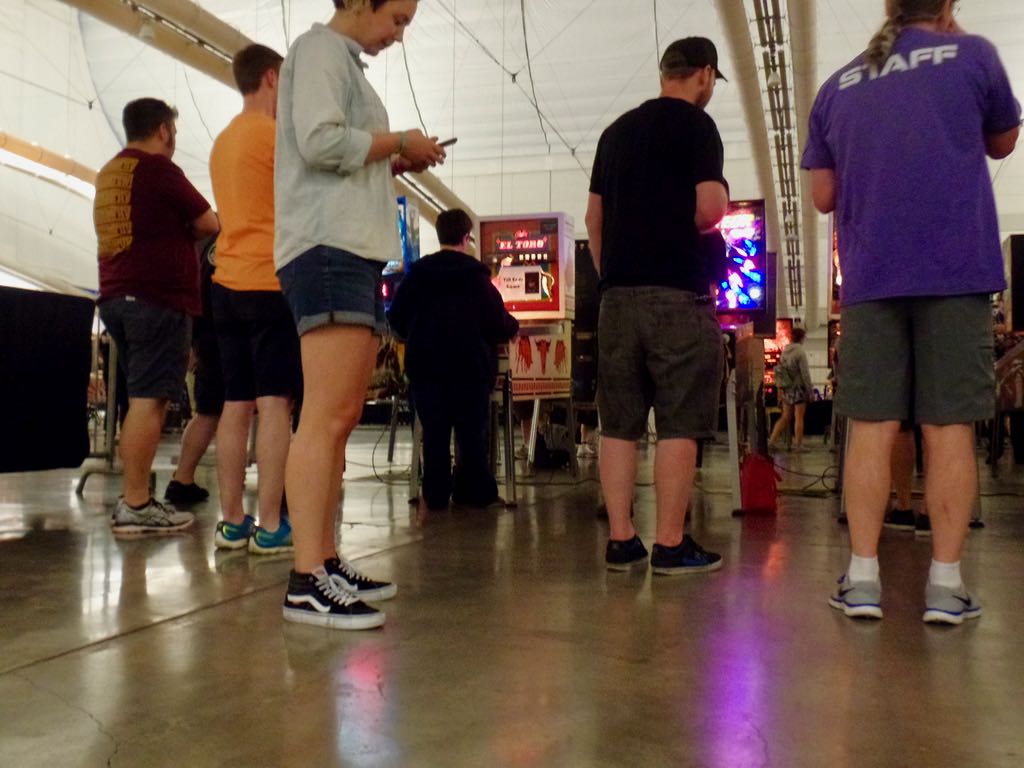 bunny_hugger trying her hand in the Intergalactic Pinball Tournament. It was the side tournament. I didn't play; I'd felt like I had played as much good pinball as I possibly could. 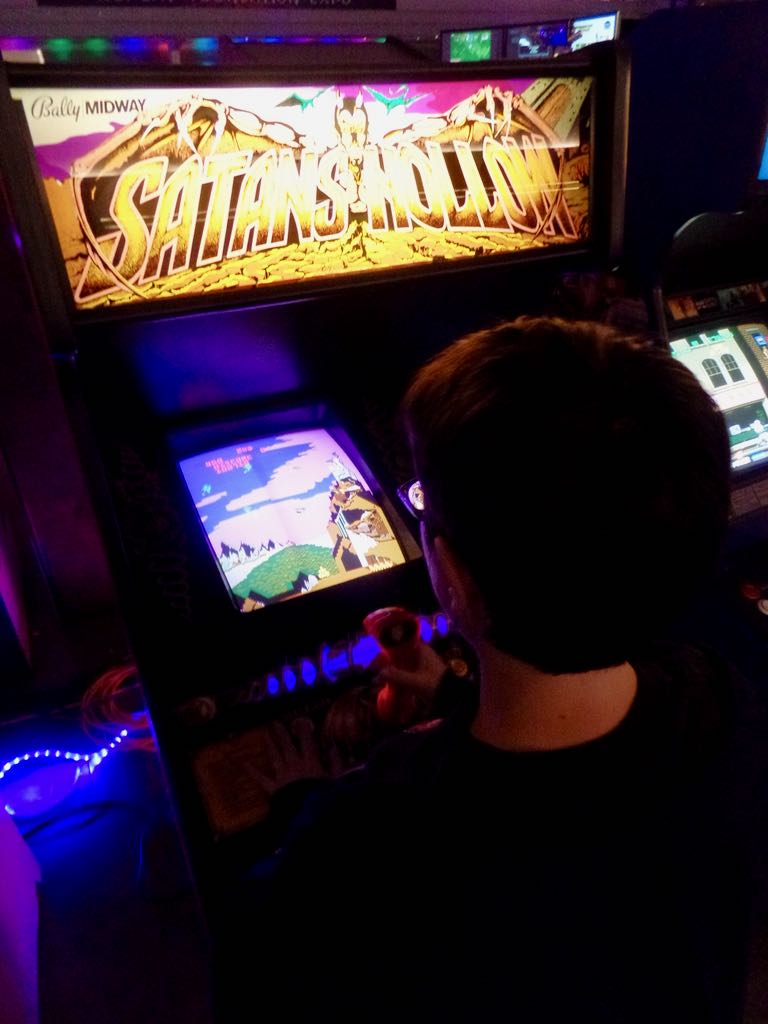 bunny_hugger doing something that I assume is a good thing on the arcade game Satan Shol Low. I don't know it.