Speaking of Rougarou, subject of our hand stamp from when we left the park for a few moments: we hadn't ridden it yet this visit or, possibly, this year. It's a low-priority coaster for us. It hadn't been comfortable when it was the stand-up coaster Mantis. The conversion to a seated coaster should have worked great, but the over-the-shoulder restraints are too likely to bang our heads, boxing our ears. But the ride was right there, on our path, and with no line to speak of. Why not ride it? And there was no line: we walked up, getting to the platform --- to the front row --- just as the gates were opening. It's impossible to get more literally a walk-on than this.

All this would be great except that it did start to drizzle again. Not hard enough to make the ride one that blasts skin off our faces. But hard enough. The over-the-shoulder restraints did their best to box my ears, but I think the hat helped soften the blows. And it didn't fall too far forward, building my confidence that I could wear this on an intense roller coaster and just enjoy the ride rather than worry I might lose it.

We were walking towards the back of the park again, following the Frontier Trail when in an unforeseeable development it started raining again. Lightly, but still. We were past most of the shops on that trail, which had closed, but noticed something we just had never paid attention to before. It's a grist mill, complete with waterwheel --- and, above the building, waterfall --- and a lot of cogs and gears and a roped-off upper floor. Also bags of old Ohio and Michigan grist mills. And an aged poster with a ``Cut-A-Way [sic] Drawing'' that helped us roughly figure out what we were looking at inside this.

bunny_hugger has felt the loss of some of the secret, secluded areas of the park as they've renovated and rebuilt places recently. This could be a new little secret quiet spot.

bunny_hugger tried to take a long-exposure picture of the dark upstairs. I tried to take a flash photograph while, it turned out, her shutter was open. So that should be an exciting result in plays of light.

With the rain still not just leaving already we darted back to the base of the Frontier Trail. The Red Garter Saloon there has music shows and we would take in the next-to-the-last of the day, and season. It was dubbed Eternal Jamnation, playing late-70s/80s rock. I spent nearly the whole show worrying that the barrel of my camera had gotten fogged up and it would never take a clear picture again. But that seems to have been an effect of the dark room and bright, colored stage lights: pictures after the show when house lights were on were just fine. Still, I did drop my camera once over the weekend and that's got me worried.

One hour left in the season! So we walked in the direction of Gemini and had to pause a moment because ... yeah, there was a Dippin' Dots ice cream stand that was still open, even though it was like 40 degrees out and 7 pm on the 28th of October. All right.

The one important roller coaster we didn't have the chance to get to yet was Gemini. In past years late-closing-day rides on Gemini have been slightly hilarious affairs, with the train getting stopped in the braking area because they don't have enough people to dispatch the other. We've several times had what are technically walk-downs, going from the braking area to the launch station. But we wouldn't this time. Gemini was closed, as it had been --- far as we could tell --- all weekend. Probably not a malfunction, just a closure for the weather. And we'd been on it earlier in the season. It's just a shame to miss a chance on it.

But that did give us a compelling answer for what to make our last ride of the season. Steel Vengeance was right there, and with a promised wait time of ... well, 3/4 of an hour. But that's the shortest wait time their sign can show. It can't have been twenty minutes. We were out quickly enough we were able to make another go-round, increasing the margin by which we've ridden this at night compared to the day. I think we're at four night rides to two days rides. Something like that. We were there late: the ride operators were warning the next load of people that they were about to enjoy their last ride on Steel Vengeance for the season. I'm not sure if we had the time to rush back to the entrance and get one further ride in ourselves, but we weren't quite up to three back-to-back rides on that particularly intense roller coaster.

And so that closed the season. We enjoyed the short walk back through the rain-painted pavement, and bade our farewells to Cedar Point for the year. We hope to get there early next season. Perhaps even do a May trip. We can hope to.

Trivia: The Plasma Analyzer instrument (among many others) on Pioneer 11 was switched off for its encounter with Jupiter in 1974. It finally restarted in late 1977. Source: Mission to Saturn: Cassini and the Hugyens Probe, David M Harland.

PS: My 2018 Mathematics A To Z: Oriented Graph, some of the fun of graph theory without the pictures that actually make graph theory fun. Hrm. 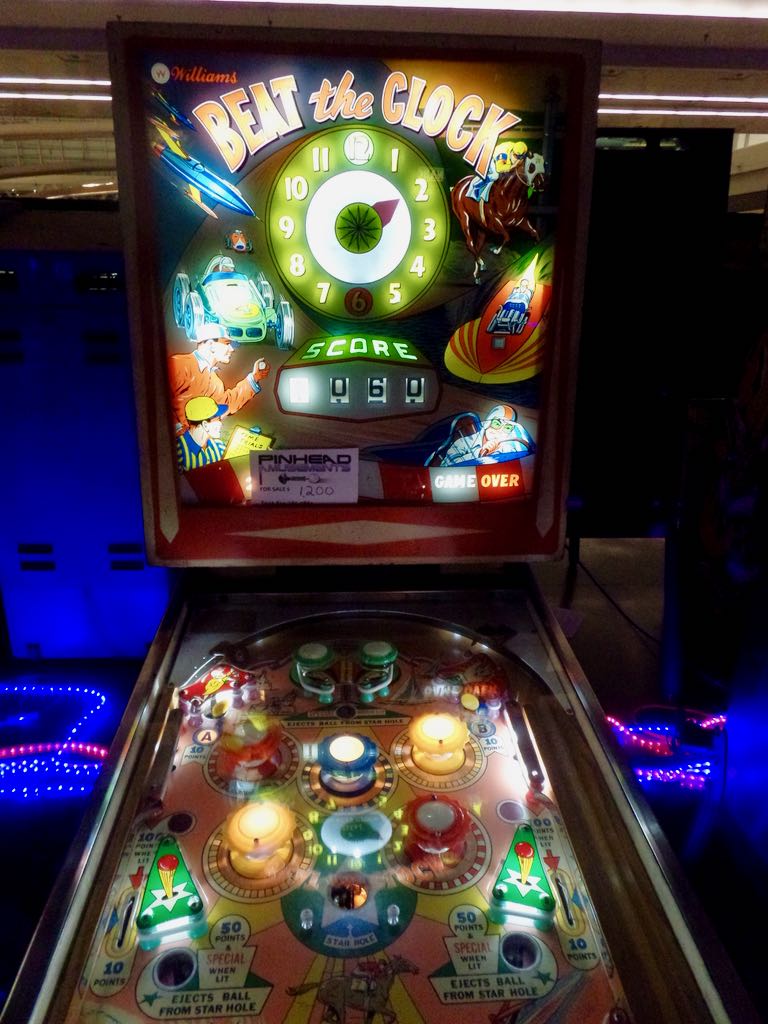 A Williams Beat The Clock, a title that actually has only been used twice, once for this game with its variety-of-sports theme. It's from 1963. 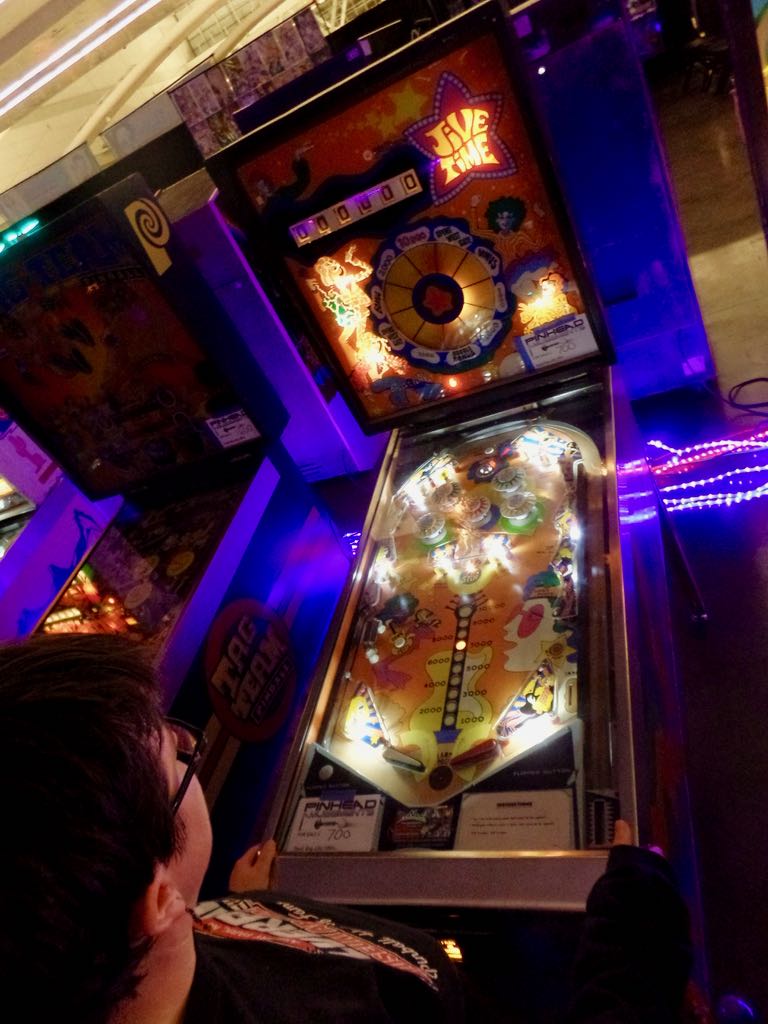 bunny_hugger getting ready to cream me on Jive Time, a game we've mostly played in simulated version on the Wii, wherein she regularly creams me. 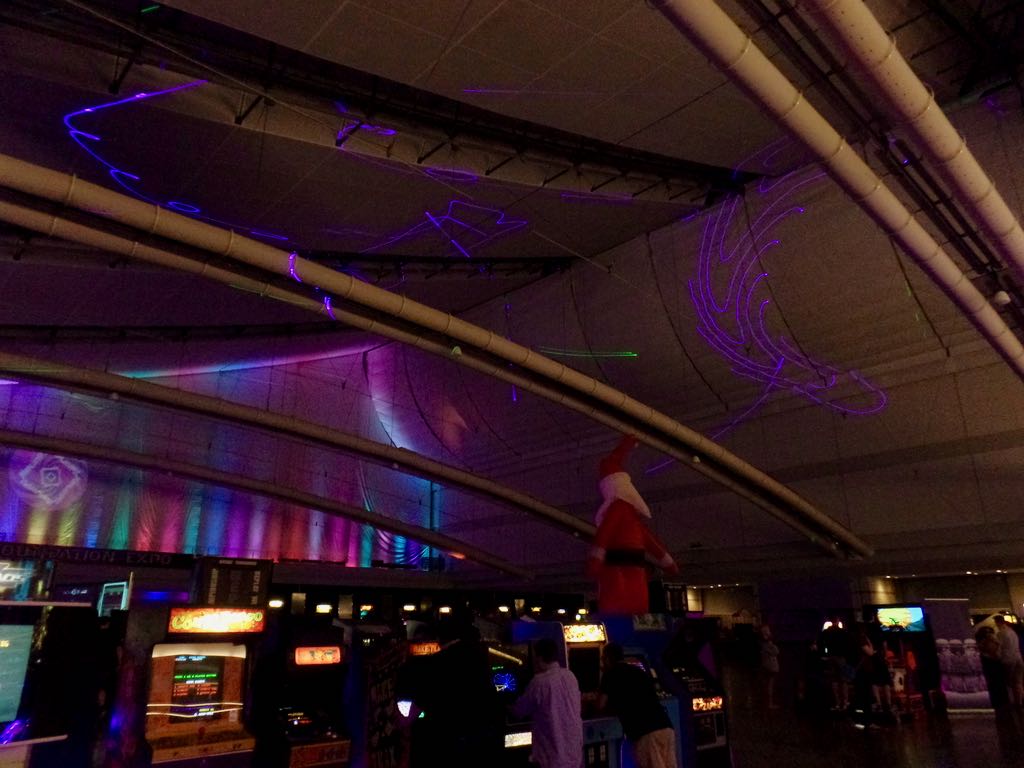 Laser lights provide evidence that there's some musical act or something going on the other side of the room.