Oh what fun Great Pumpkin brings when Halloween is here

One weird little side note happened on driving back from Cedar Point. That was at the Speedway in Maumee where we always stop for a break and to refuel.

bunny_hugger wanted to get a hot chocolate out of their machine, and it wasn't working, and someone on staff noticed her frustrations. Something had clogged up the dispenser and apparently it'd been like that a while. They said this now explained why there was an abandoned cup of hot water earlier. Anyway in compensation they made a hot chocolate (with mini marshmallows) from behind the counter, their higher-grade machine, because Speedway now has a deli counter and two grades of coffee/hot-chocolate makers. All right.

Monday we spent most of the day at

bunny_hugger's parents. The only real work to do was picking up our rabbit. I didn't think we had time to play Mice and Mystics, unfortunately, since we were in the midst of the last chapter in this kit. But that was because we were taking time to carve jack-o-lanterns. Once again we hadn't had time to go to a pumpkin farm and pick ones from the ground. But I got a couple good-sized ones for us from the Horrock's farmer's market.

bunny_hugger carved this neat, witchy one with a neat pupil design that squirrels ate away right away. I had a moment of inspiration and carved a pumpkin with a bat silhouette design as a mouth.

But our excellent carvings would go barely appreciated, except by ourselves. We had a terrible trick-or-treating turnout, with just three kids showing up in two groups. We've had turnouts that lousy before --- one year just a single group of kids --- but those had excuses, like bitter cold or rainy weather. This? It was cool, but clear. And

bunny_hugger had listed our house on a local Facebook group as yes, giving away candy, including full-size candy bars for the first half-dozen kids. It's disheartening.

After trick-or-treating, such as it was, we dressed up and went to our local hipster bar for their Halloween party. I realized very late in the game that I couldn't think where my scarecrow accessories were (

bunny_hugger knew and I would have had I asked her), so I just put on my red panda kigurumi. And answered a number of people who weren't sure whether I was dressed as raccoon or red panda. Always happy to answer, and to give the pro-tip for telling: red pandas have dark bellies. They're one of the rare mammals who don't go in for Thayer's Law.

bunny_hugger brought out her basilisk costume. She'd used parts of her dragon costume, and old bat and bird costumes, plus a new chicken mask to make this. It had been a slightly confusing hit at the Fear and Trembling pinball tournament the previous week.

We hung out with several of our pinball league people, regretting only that we'd have to go home (work the next morning) before the costume contest. MWS was there, and in a free raffle won a set of prizes that can only be described as ``had a ten dollar budget at the thrift store''. It included a videotape of Bozo the Clown cartoons, a comic plate, and this enormous terra cotta dolphin that, near the end of the night, he accidentally knocked off a chair and broke.

bunny_hugger, respecting her family's heritage as a gluing and epoxy master, volunteered to fix it. And she would, after a couple false starts and learning that, for example, you need to use a lot of Krazy Glue to glue terra cotta back together. We were able to return it to him this past Saturday, at a nice well-populated pinball event where everybody could wonder at and be a little bit too impressed by someone's old souvenir.

Trivia: George Westinghouse instituted a half-day off on Saturdays for his workers in June 1871, following his first trip to England. His wsa the first Pittsburgh-area firm to do so. Source: Empires of Light: Edison, Tesla, Westinghouse, and the Race to Electrify the World, Jill Jonnes. 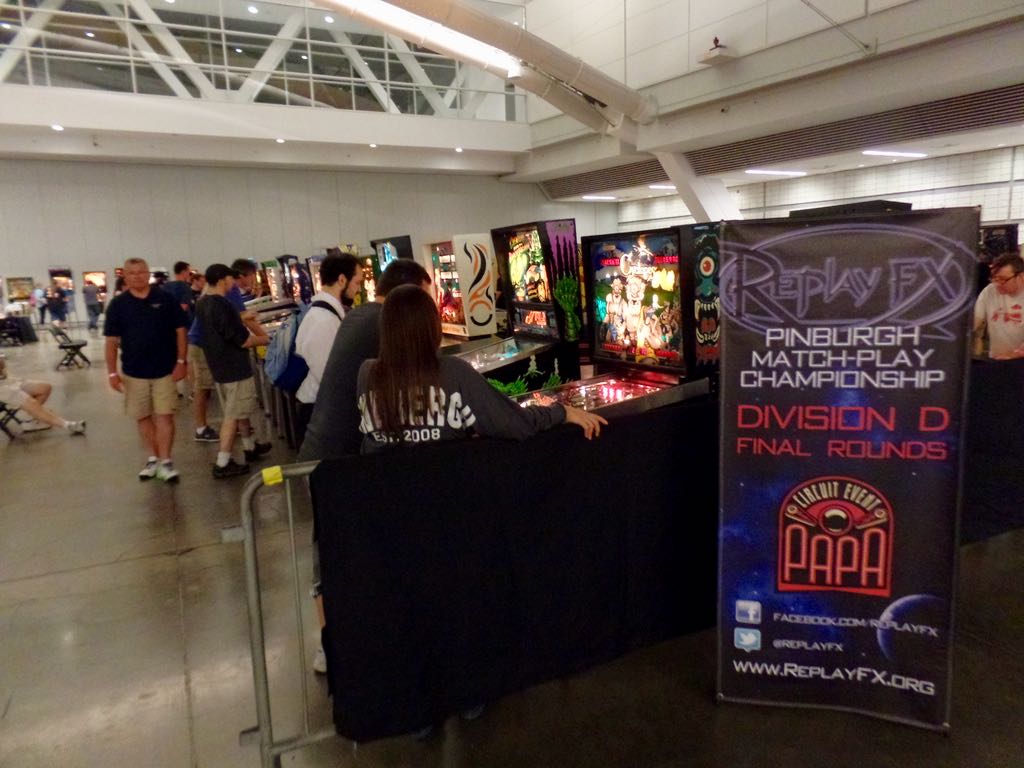 Aftermath. With the D Division finals done at last --- only the A Division took longer --- normal people can go around and play the tables which vexed us so. 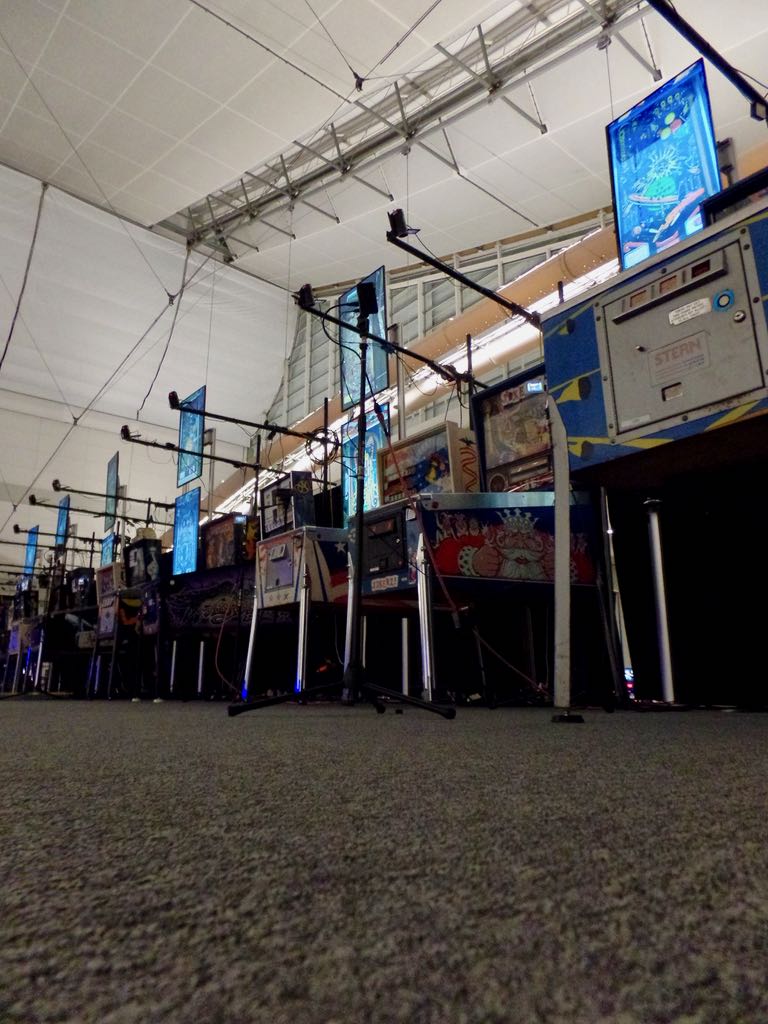 The stage, and the tables for A Division, all cleaned up after the end of its games. 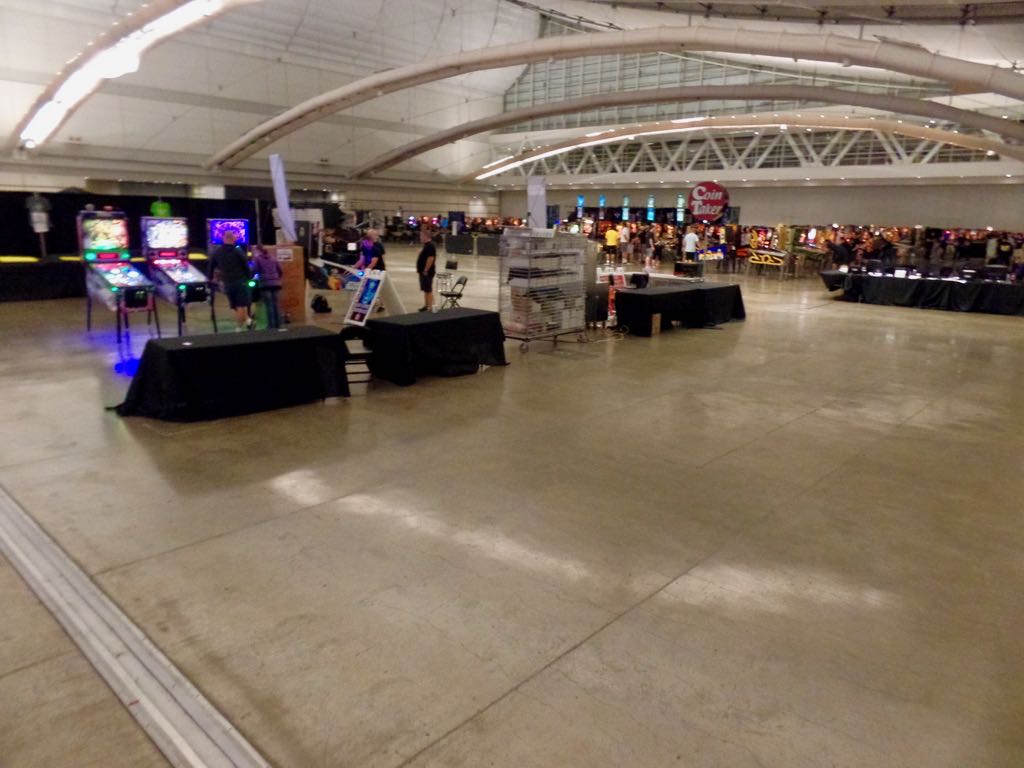 Pinburgh nestling down for the night and looking all cute and innocent and all that.