bunny_hugger's birthday we went again to Bronner's Christmas Wonderland, in Frankenmuth. We've done it three times now; it's officially a tradition and we're going to be in trouble next year when her birthday is a school day she can't skip to go Christmas shopping. But done for the first time: we went on a weekday, rather than weekend. It had been an engagingly mad event, going on the weekend after Halloween the past two years. This time was much quieter. According to intelligence gathered at the Frankenmuth Cheese Haus, the weekend was incredibly packed, enough to make them run out of some cheeses. Our inference is that the weekend after Halloween is a particularly busy time. Good data to know.

bunny_hugger about Letterboxing not getting anything.

They have an enormous number of ornaments that can be customized, given any particular name. We spent long enough diddling around looking for one that might fit me --- I finally settled on one that had Santa putting my name on the Nice list --- that we missed the 5 pm deadline for getting a paint-brushed ``I Love My Bunny'' ornament. We could get one done in pen, instead, and accepted that as next-best, but it does mean Sunshine has an ``I Love My Bunny'' ornament not quite matching those of Stephen and Columbo. ... And we don't have one for Penelope, who was with us just long enough to make us feel bad we didn't spend more time with her, and who never got close to a holiday with us.

A lot of what's great about Bronner's is just embracing the spectacle, a place that's got millions of different ornaments. A place with a slowly growing number of raccoon ornaments. And mouse ornaments. So many mice. I'm not sure but I think raccoons, mice, and foxes are slowly taking over Christmas. Also inexplicably common at Bronner's this year: figures made to look like marshmallow-based figures. Marshmallow snowmen make sense, more or less. A marshmallow mermaid ornament? I don't know, and neither does anyone else.

Even without crowds to navigate around Bronner's is so large we spent about five hours making the one circuit of the place. That's also with a break at the cafe for sugar cookies and tea, of course. And time spent lingering over the carousel fixtures they had --- several of them moving, and playing tunes, including one that could be switched to non-Christmas songs so it's displayable any part of the year --- and miniature villages. They had a Halloween Town, yes, and several Christmas towns, including one that's Charles Dickens-based. So if you need a miniature figure of Ebeneezer Scrooge begging for compassion in front of his future grave and the Ghost of Christmas Yet To Come? We can hook you up. Also --- an this is legitimately great --- they have a custom-made miniature building that represents Bronner's first building, replaced some time decades ago.

So the guy working the ornament-customization table, who put my name on Santa's Nice list, mentioned that the Frankenmuth Cheese Haus had a new building. It was across the alley from where the old one was, but about twice the size and had a restaurant and everything. We wanted to get to the Cheese Haus for reasons that are right there in the name, of course. And it suggested a good place for dinner.

We did not find a restaurant at the new, larger Cheese Haus. They did have a grease truck, the Cheese Trap (``Proudly Featuring Products from the Frankenmuth Cheese Haus'') in the parking lot, but it was closed for the night, maybe the day. The place did have what the old Cheese Haus did --- lots of cheeses, crackers, smoked meats, oddball candies, and souvenirs --- but also much more space. Like, you didn't have to move along a one-way track to get through the place. It also had a 1300-pound tower of cheddar, with Bavarian figures carved into the side, along with the message they were celebrating their 50th year in operation. Yes, they were selling bits of cheese carved from the 1300 pounds of cheddar to make the figures inset in there.

They were short of cheese samples, the result they explained of the crowds there that weekend. That's all right. We did try a good number of cheese spreads, and buy a bunch we're not near finished eating yet. Also a good number of more pricey cheeses, which we're parsing out similarly carefully.

But all this did leave us without dinner. We were thinking to stop at Taco Bell or something as we drove home --- getting well into the evening --- when I noticed something great on the highway signs. So I made a turnoff that

bunny_hugger couldn't understand. It was to White Castle. There's no White Castles near us, which is really unfortunate because they now have the Impossible Burger-based Slider. So we were able to close out her birthday with that best of things, the fast-food meal that's vegetarian but still great. Good close to the day.

Trivia: The meteor impact which 15 million years ago created the Ries crater in what is now Germany threw boulders more than 95 miles into Switzerland and the Czech Republic, and sprayed droplets of molten rock several hundred miles. Source: Oxygen: The Molecule that Made the World, Nick Lane.

PS: Getting to the end of Sunday at ReplayFX 2017: 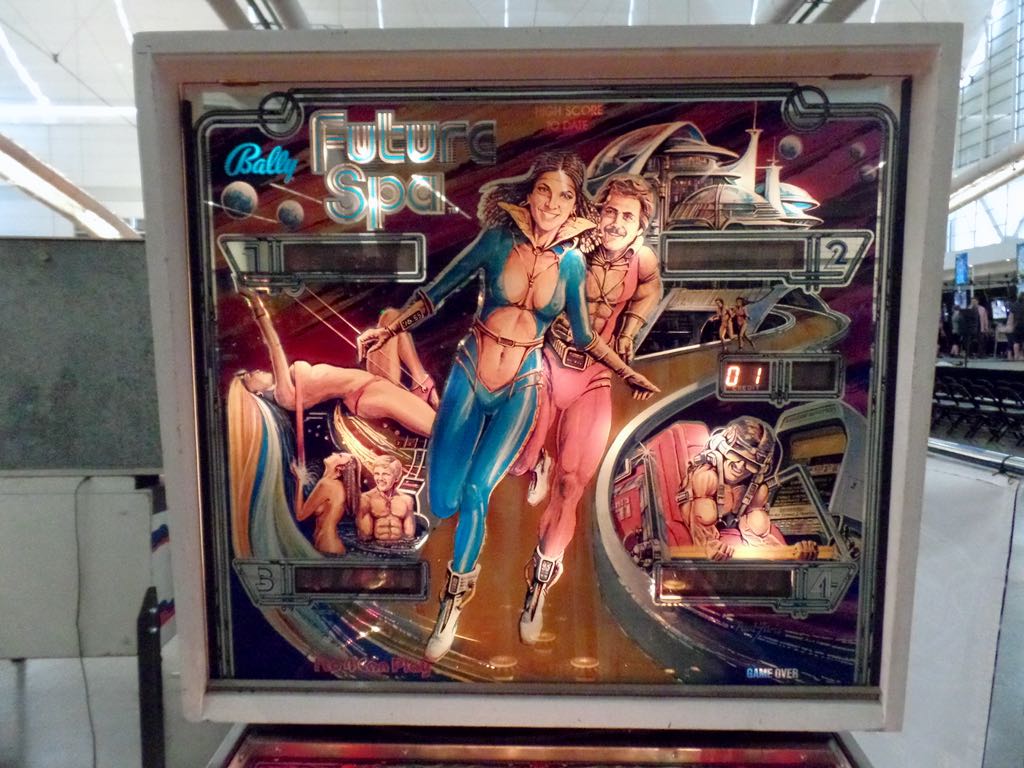 Backglass for Bally's Future Spa, which will never stop deserving to be the movie poster for some plotless yet visually stunning 70s science fiction movie probably set in a domed city. 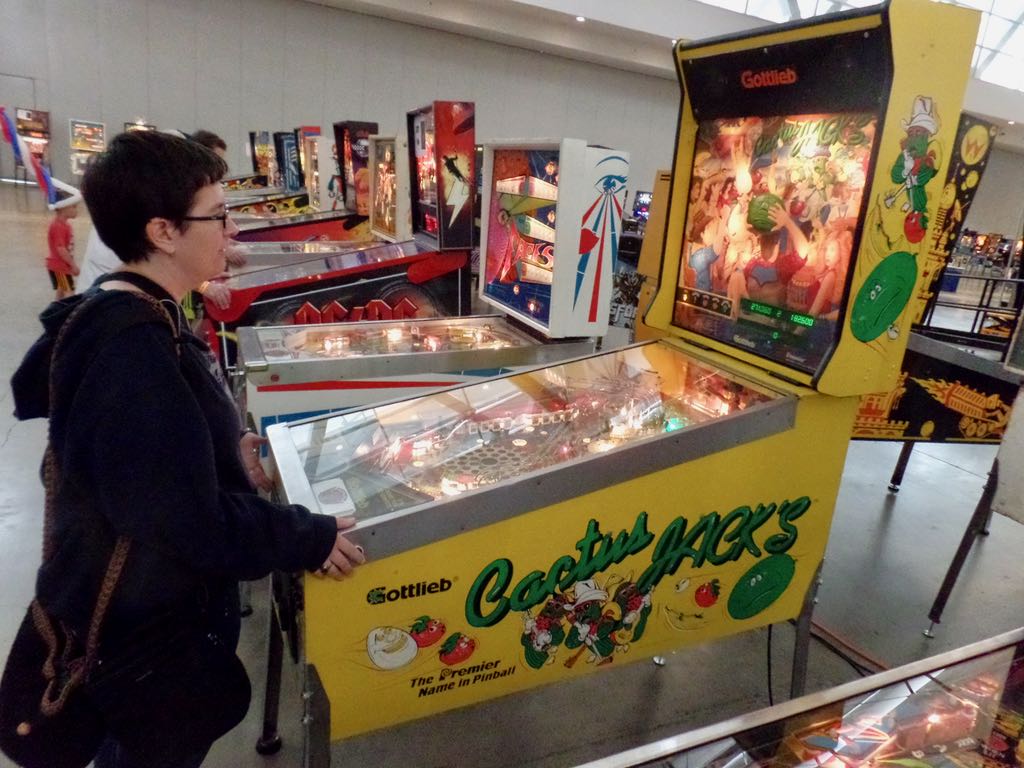 In the closing minutes of ReplayFX 2017 I introduced

bunny_hugger to the joys of Gottleib's Cactus Jack's, a daft game about throwing fruit at a western bar's band of musical cactuses. it's not so goofy as the contemporary Class of 1812 but I had a lot of good memories of playing the game in grad school and was so happy I could share. 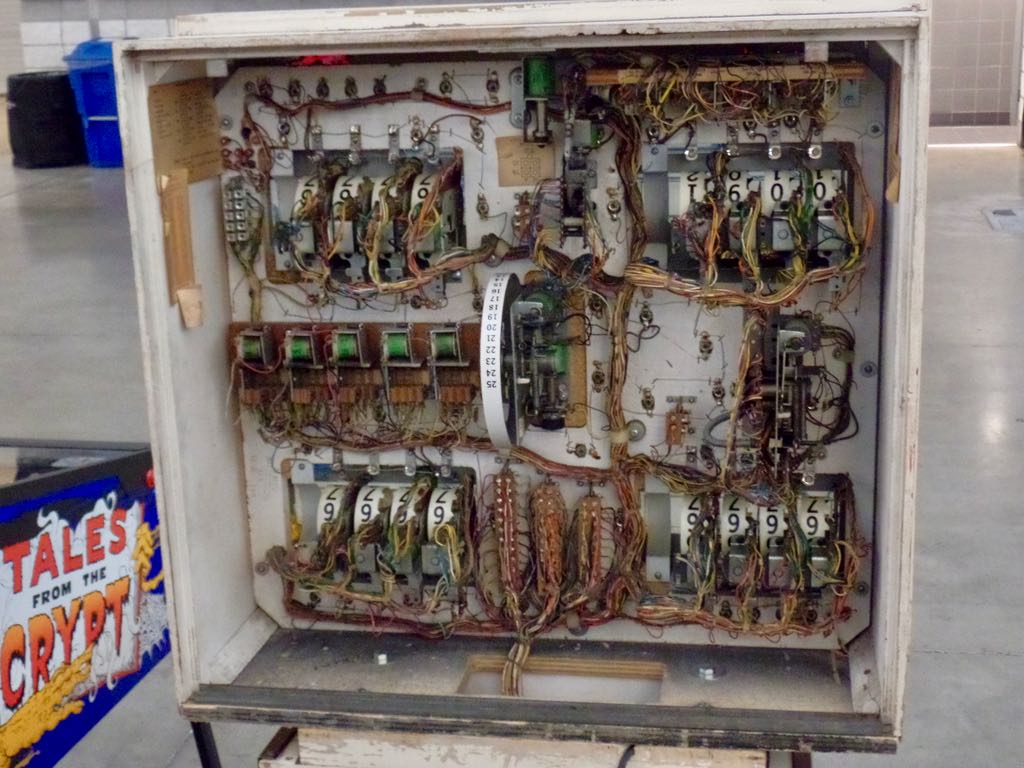 Back view of an electromechanical pinball with the backing removed. This is what scoring reels and, in the center, the credits-available reel look like. Also you see why cable management is so important in games of this era.