This is Santa's big scene

Silver Bells In The City is the Friday before Thanksgiving. And yes, Thanksgiving was early this year --- it doesn't usually come before Halloween like this --- so that Silver Bells was even earlier. We had hopes this would make the parade and outdoor-after-dark events a bit warmer than usual. Not so warm as two years ago, when 70-degree weather was the herald of a monsoon that destroyed the parade. Whether it might rain, or rain as intensely as it did in 2016, was mentioned in every noon-news weather update the week leading up to the event. It didn't rain, although it was chilly, temperatures in the mid-30s all evening.

We drove downtown closer to 5:30 than we'd wanted. While traffic got heavy, parking wasn't bad at all. There was a surprising lot of empty space in the parking lot by the city convention center. Possibly this is related to the City [ Farmers ] Market, which finally gave up and closed this year after a failed renovation a decade ago and about two decades of marginal existence. Except that we saw big lit Open signs. This was from the lone remaining tenant, a bar. They had other spots for the things the City Market had done previously --- Santa, free cookies and cider, musicians, that sort of thing --- so perhaps the crowds were gathered there instead. Still seems like people were needlessly skipping a good open parking lot.

So we got up front, just before the capitol, and found our usual spot hovering behind one of the TV cameras for the parade. It's a good spot; people don't seem to realize how much of a pretty clear field of view you get standing behind the area roped off for the camera. And this year we absolutely must have got on camera: the camera operator talked to those at the rope (well, tape), warning us when we were about to be on camera and to look excited. A mother standing beside us warned her kids that they had to be fully engaged and active for this or they wouldn't get their phones back. The camera swung around to look at us early on, before the parade really got started. Also while floats for other TV stations were going past. At one point the camera settled on me and

bunny_hugger, and seemed unwilling to move. No idea yet if we were actually on --- we haven't watched the recording yet --- but it was a bit uncanny. Also at one point the camera operator was approached by someone

bunny_hugger recognized as the same one who last year had spotted the camera's low-battery light and changed it in the moments the station was on commercial break.

The parade was about an hour and a half long, as usual. Ten bands, only one of which played ``Jingle Bell Rock'', suggesting that band directors are not going to allow a repetition of that time a couple years ago when without exaggeration half of all the bands played the same song. One band did play a medley of tunes from Star Wars, which is thinking so far outside the box as to be baffling. The startling thing is that some floats we're used to seeing just were not there. The Preuss Pets truck didn't make an appearance, for example. Most surprising is that the Lions Club flyers --- who'd putter around in small, biplane-shaped vehicles --- weren't there. I'm not sure whether they were there in 2017. I'm a bit worried some of these floats might have been lost, or their organizations gave up, after the monsoon.

They lit the tree, and then held the Community Sing. This was new; in past years, the Community Sing had been this weird pause between the parade and the tree-lighting. The Sing wasn't a success in getting members of the community to sing along. The performers played in this cozy, smoothy jazz style that's fun to listen to but hard to pick up on. Still, the song was over and now, fireworks! ... or not. The announcer --- who'd fumbled a lot of the introductions of floats and marching bands, and giggled at nothingness enough that

bunny_hugger jokingly wondered if he was stoned --- told us that because of some scientific research going on they couldn't do fireworks this year, sorry. This is surely why they moved the singing to after the tree-lighting, so that there was some resolution after the climax of the parade. It was anticlimactic anyway.

After this disappointment we poked into City Hall, where they had cookies and cider, and were also selling popcorn and hot chocolate and just had a bunch of people somewhere warm. We only spent maybe twenty minutes there, letting our feet thaw. And wandering around a place that the city has big plans to sell off, on the grounds that it needs more repairs than they can put up. It's a mid-50s building, charmingly modernist, so we wanted to explore what we could and appreciate its styling while it lasts. Still, the crowd there dispersed faster than we imagined. We did get caught chatting with a woman extremely impressed with

bunny_hugger's camera, and eager to see someone else appreciating the style of the building. The most baffling thing we discovered through all this: hidden behind a partition wall, a disused staircase with boxes and boxes of miscellaneous boxes. One was a metal case, painted 'M.A.S.H. 4077th.' ... Okay.

We went back out to the outdoor Christmas village. It was wrapping up --- barely a quarter-hour until its official close --- and we were disappointed not to find a place selling pasties again. We did find someone selling scones that turend out to be really good, and that promised their frozen, ready-to-bake pasties were in the farmer's market we get our vegetables from. We're going to have to check whether that is actually true.

It was warm enough to spend a good while on the capitol grounds, watching the tree and exploring the views of the tree and the downtown area in the evening. Still, they were striking all the stages and prepared areas and all that; I wonder how long it took for there to be no trace of the parade.

We got home and ate warm stuff for dinner.

Trivia: In 1904 Alexander Graham Bell patented a tetrahedron kite design, with a large flying surface built of many small pyramidal cells. It promised a stable, lightweight flying surface. Source: To Conquer the Air: The Wright Brothers and the Great Race for Flight, James Tobin. 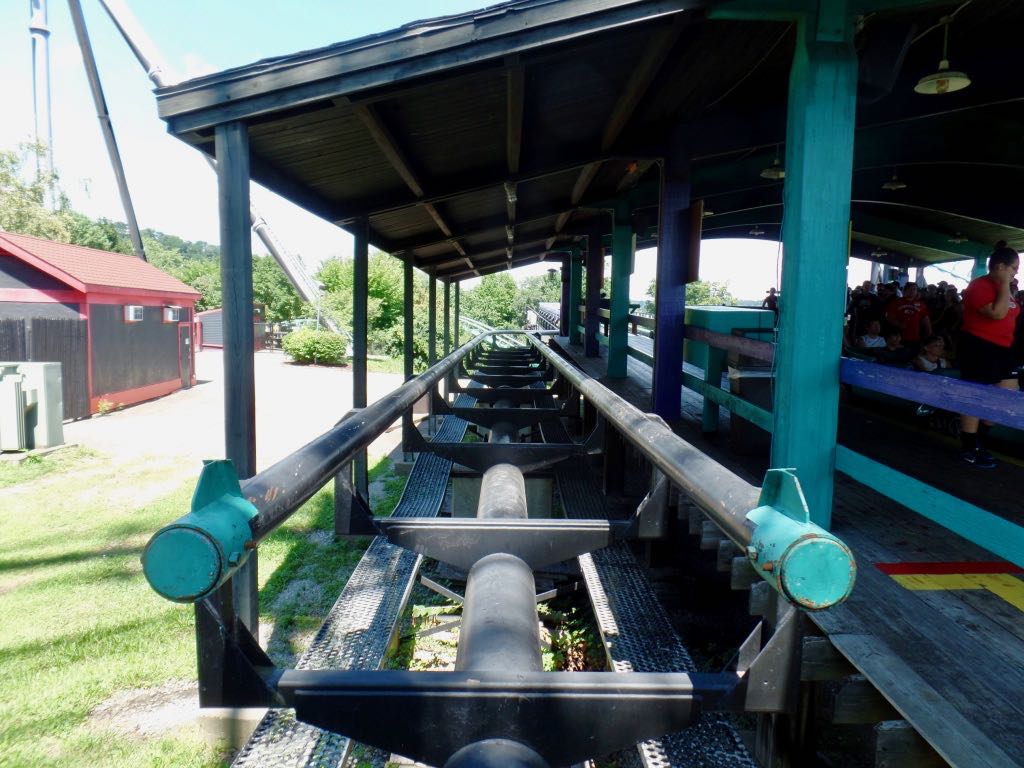 Side track. Where they keep the second train when it's not in service on the Phantom's Revenge. 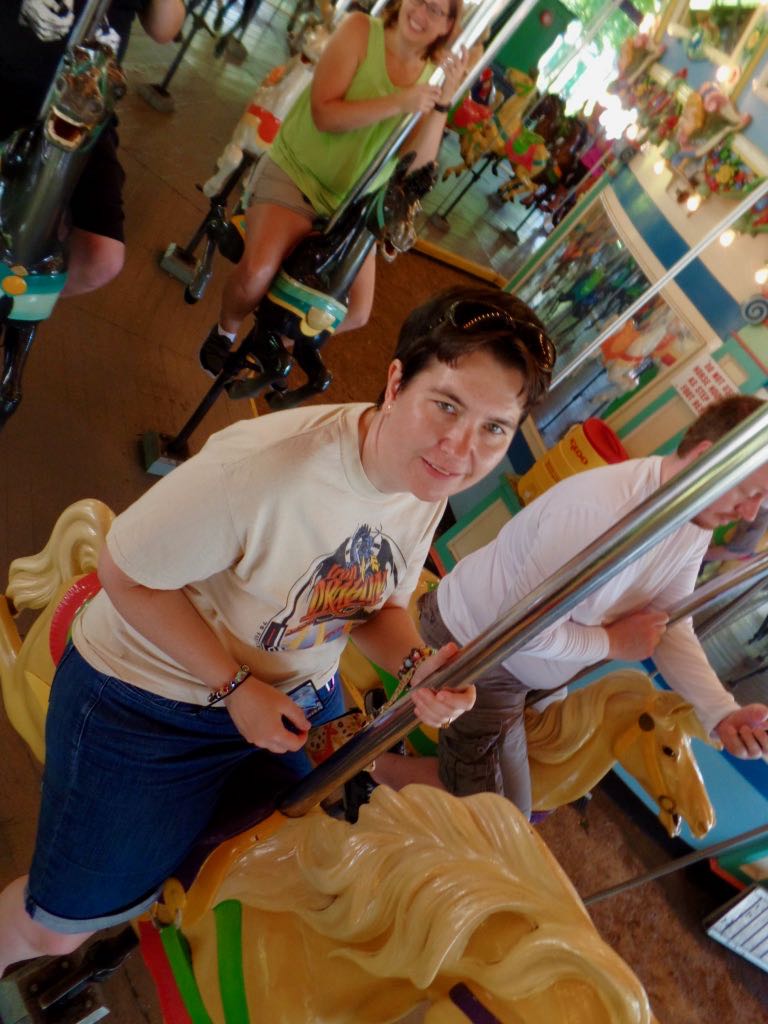 bunny_hugger looking not at all skeptical of me photographing her on the Grand Carousel at Kennywood. 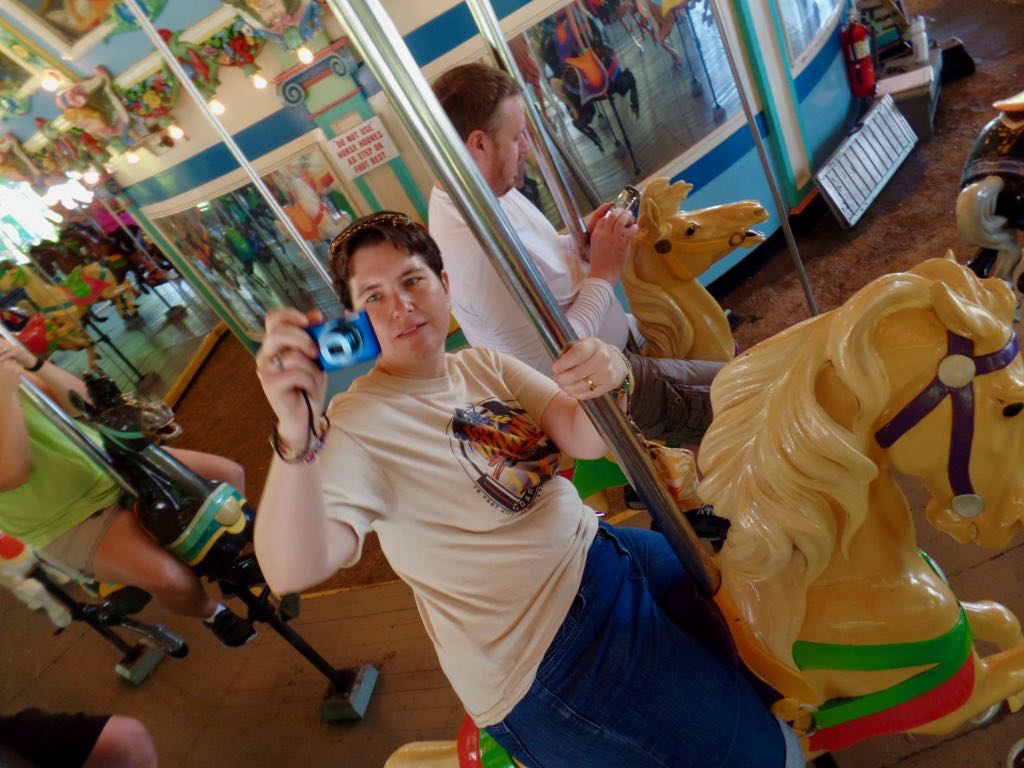 bunny_hugger taking a secret selfie of herself in the curved safety-check mirror on top of the Grand Carousel.