Part of our autumn chores is moving the goldfish in from the pond outside. It's just not quite deep enough for them to safely winter over. The past few years have been light enough they could likely make it, but there's no telling when we'll have a bad one. This started in mid-September when I put sponge filters in the pond, to soak up our bacterial culture. And then in mid-October when I brought the sponges inside and started trapping fish using this neat net trap. We had a good haul, early on, getting a dozen fish in about two days. And then another half-dozen or so in the week after that.

We got our last good haul of fish in right after being away for Halloweekends, bringing us up to thirty fish brought inside. Happily, one of the last ones we could bring in was Gemini, one of the two largest ones that we work out is the only survivor of our original bunch of eleven goldfish. (One died almost right away, two black goldfish never got inside that winter and died in the ice, and others disappeared or died one at a time through the years.) So having him safe was a great comfort.

In total we got thirty fish inside. That's well down from last year. Also down from this spring, when we put --- by my count --- 38 fish out. But there wasn't anyone interested in coming into the trap the last couple weeks. And now we've had cold snaps that froze the pond over. If there's some warm weather again I might be able to do a last dash. But I have to admit I haven't even seen other fish prowling around. They might be nestled into the mud for, hopefully, a gentle winter. Or worse might have happened.

But another comfort: we got this one distended golfish in. And in to medical care. The fish we noticed from about early spring looked huge, like she had swallowed a golf ball. She wasn't obviously distressed, and was able to swim around nearly as fast as the others her size. So we figured there was no catching her until the fall migration.

bunny_hugger suspected the fish might be egg-bound, with a spring's reproductive energies just not able to be released. This is also why we've taken to calling the fish 'she', since otherwise, we just have no idea. It's the goldfish's business to know.

The vet, at the Preuss pet shop which specializes in reptiles and fish, didn't think so. He thought she had an infection, probably caused by feeding when the water was too cold. It was only last year --- when we had a dreadful number of fish die on us --- that we learned how we'd been feeding the fish with too-cool water. The vet thought it might have been cold snaps in early spring that caused the problem instead. His prescription was a week's worth of antibiotic and fresh water, so the fish got a week's boarding at the pet store. Two weeks, in fact, since she seemed to be making progress but wasn't quite there. (They ended up charging us for just the original planned one week, perhaps a desire to honor the original estimate, perhaps to be nice to people who will pay for hospitalizing an animal culture treats as disposable.)

The fish, returned, is ... still big. But she does look less like she swallowed a golf ball and now more like she's got a ping-pong ball. The vet believes what remains is an ovarian cyst. But to diagnose it for certain, or to do anything about it, requires surgery with its attendant risks. And, he pointed out, she does seem to be fine: no problems with mobility, no problems with appetite, no problems with buoyancy. So we agreed to let that rest unless she shows signs of distress.

Besides taking care of fish, Preuss also does (free) water quality checks. Since I was there anyway, it was worth getting that reviewed. Their verdict: we had way too much ammonia and nitrates/nitrites. The prescription there was 25% water changes, daily, which is a heck of a thing for a pair of stock tanks holding about 120 gallons of water each. But after two weeks of this the water was getting under control enough that we could switch to every-other-day, and then twice-a-week, changes. Which was great since hauling the garden hose upstairs to the tap outside was getting pretty old. Especially with the temperatures getting to freezing, which has bad consequences for the usability of a garden hose. Anyway now we're able to do a simpler 25% weekly change, which I'm hoping to do by changing a five-gallon bucket of water every day. We can fill a five-gallon bucket from the kitchen tap. We don't have a basement tap, which normally doesn't matter, although at times like this we feel the absence. Now we can work on the subtler problem of our carbonate hardness. Goldfish need carbonates in the water. Lansing, which gets its water from an aquifer, removes all the minerals. We have to get things better in balance.

So that's the story with the goldfish living in our basement. Living, by the way, in more comfort than they could last year. With our new, intact, insulating basement windows the basement's warmer than it's ever been, and the fish warmer too. We'll need to keep feeding them a while.

Trivia: The exact origin of salad bars in restaurants is unclear; it does seem to date to the late 1950s or early 1960s. Source: Grocery: The Buying and Selling of Food in America, Michael Ruhlman.

PS: Kennywood's Racer! Somehow I failed to get a good shot of the restored-to-1927-livery station right then. Hm. 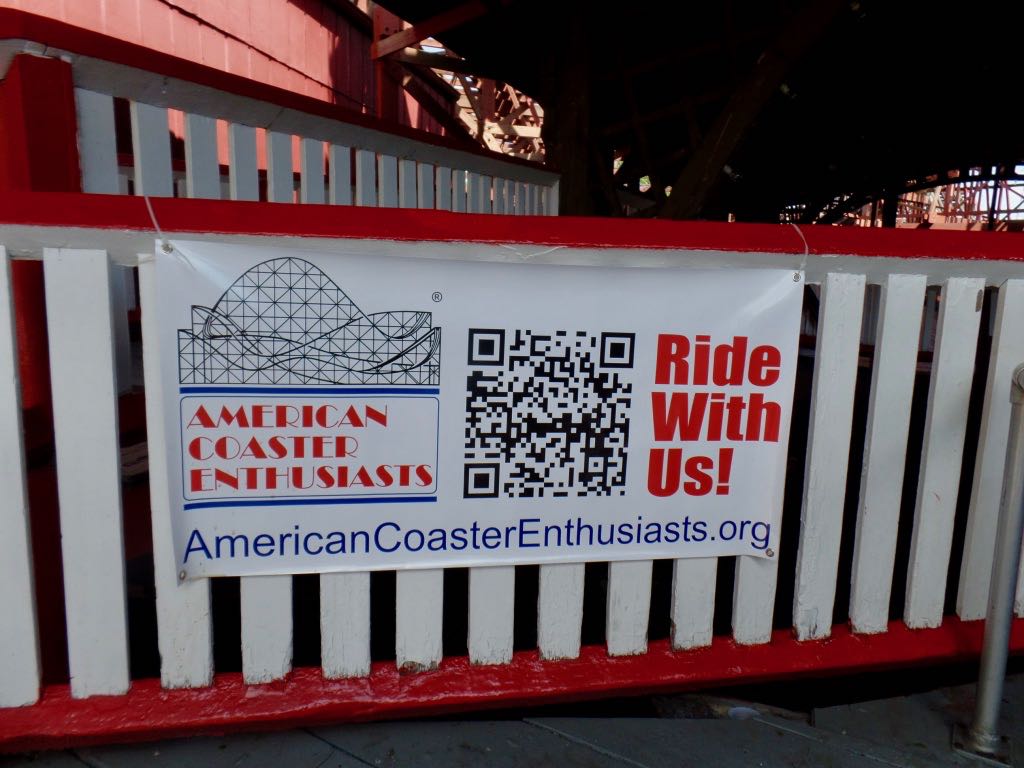 American Coaster Enthusiasts sign outside Kennywood's Racer Möbius-strip roller coaster. It encourages people to join, again without awareness that nobody has ever deliberately chosen to scan a QR code. 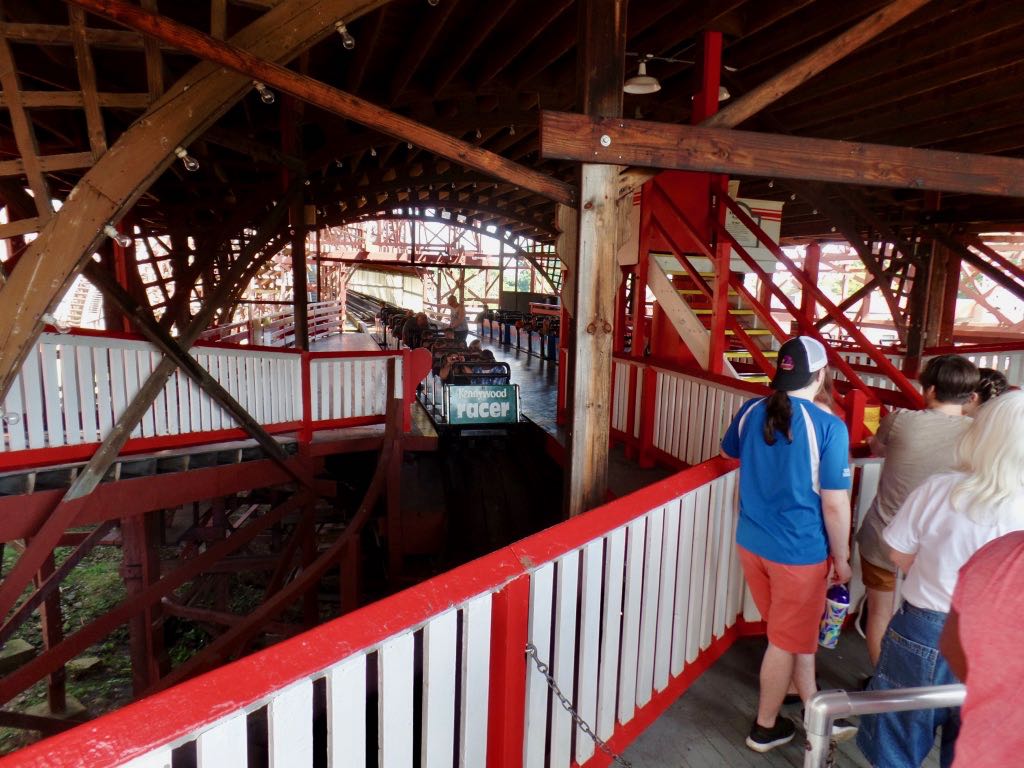 Part of the queue, and the left-side departure track, for the Racer. The green train heading out here will return on the opposite side of the station. Look at how far down the ground is there, underneath the track: you don't appreciate how elevated the station is, because it's flush with the ground outside it. Kennywood is built on a severely uneven terrain. 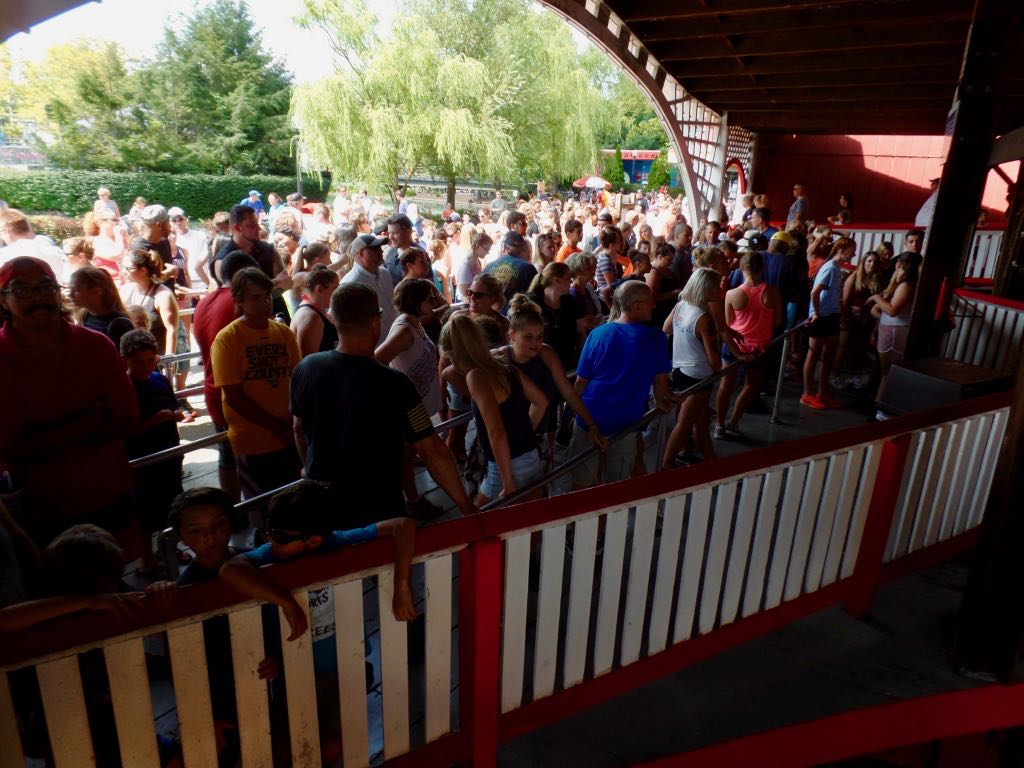 Racer is one of the always-popular rides; here's a look from inside the station back at its queue, which sprawls outside of its building.