Couple months ago some slick-talking Verizon salesman talked my dad into upgrading his iPhone. Along the way, the salesman screwed things up. It seemed at first like it was a weird but vaguely understandable screwup. What stood out to my father is that suddenly his account had my picture at the top of it. He and I have exactly the same name, you understand; we don't truck with senior and junior. This used to cause us minor bits of confusion, especially when I lived in his house and we both voted in the same location. But it's been a long while since we lived in the same place, or even the same state. So while it's true I have the same name as my father, and we both have Verizon cell phones, there's not a single good reason to conflate the two of us.

I never got straight precisely what happened, but did have a bit of terror when my father asked if any of his contacts were showing up on my phone. I mean, what if mine got on his? My father turned the problem over to the Apple Store in his area, and they needed my AppleID and password to get this sorted out. So whatever Verizon salesman in South Carolina screwed this up, he really screwed it up good. (Yes, I changed the password to something disposable and changed it after, so my father can't go downloading copies of my incomprehensible grand strategy games or volume of the 100 Best Songs of Frank Crumit.)

And screwed it up even better than that. Ever since this happened --- back in September, mind you --- I haven't been able to call my father. At first I didn't think anything of it, because what I got was my calls going right to voice mail, and I figured, well, he's doing something. Mostly light repair jobs, but, y'know. He's retired, not dead. So if I missed him in my weekly call a couple weeks running that didn't stand out. It was weird he didn't call me back, but I could imagine he figured, oh, I always call a Tuesday or Thursday, I'll be right on. It was a shock when I found out he wasn't getting my voice mails, or any sign at all that I had called him. More, it turns out he's been trying to call me, and his calls to me go right to my voice-mail. Or they pretend to: I never get the messages, and I never get notice of the messages.

So I finally brought my phone in to the Verizon store to explain what was going on. They were baffled but could only suggest, well, maybe we're set to Ignore one another? They were glad to check my iPhone to see what the settings were, and were chagrined to learn I don't have an iPhone. I've got a decade-old LG something or other. They recommend getting my father's phone to an Apple store.

Meanwhile my father --- whom I can contact using our land-line, or by calling my mother --- has got the idea in his head that somehow the age of my phone is contributing to the problem. Me, I don't see the need to replace my phone while this one is working. And, y'know, he's the one who upgraded and launched us into a world where we can't call one another.

Trivia: On the day it officially came into being the Penn Central railroad had $13.3 million cash on hand, on assets of something like $6.5 to $7 billion. Its chief finance officer estimated the minimum it should have on hand was about $40 million. Source: The Wreck of the Penn Central: The Real Story Behind the Largest Bankruptcy in American History, Joseph R Daughen, Peter Binzen.

Currently Reading: Hägar the Horrible: The Epic Chronicles, 1977 - 1978. Dik Browne; editor, not at all clear from the front material. Minor astounding discovery: oh yeah, like, Hägar's doctor and lawyer and all have names. (Dr Zook and Koyer the Lawyer, to be specific.) Also I kind of knew that Hägar was a self-caricature of Dik Browne. Turns out Helga's a caricature of his wife; Zook, of his doctor, Dr Zucker; Koyer, that of his attorney Ted Coyer. And Lucky Eddie? Based on Dik's brother Edmund. Huh.

PPS: Kiddieland at Kennywood! What isn't to love? 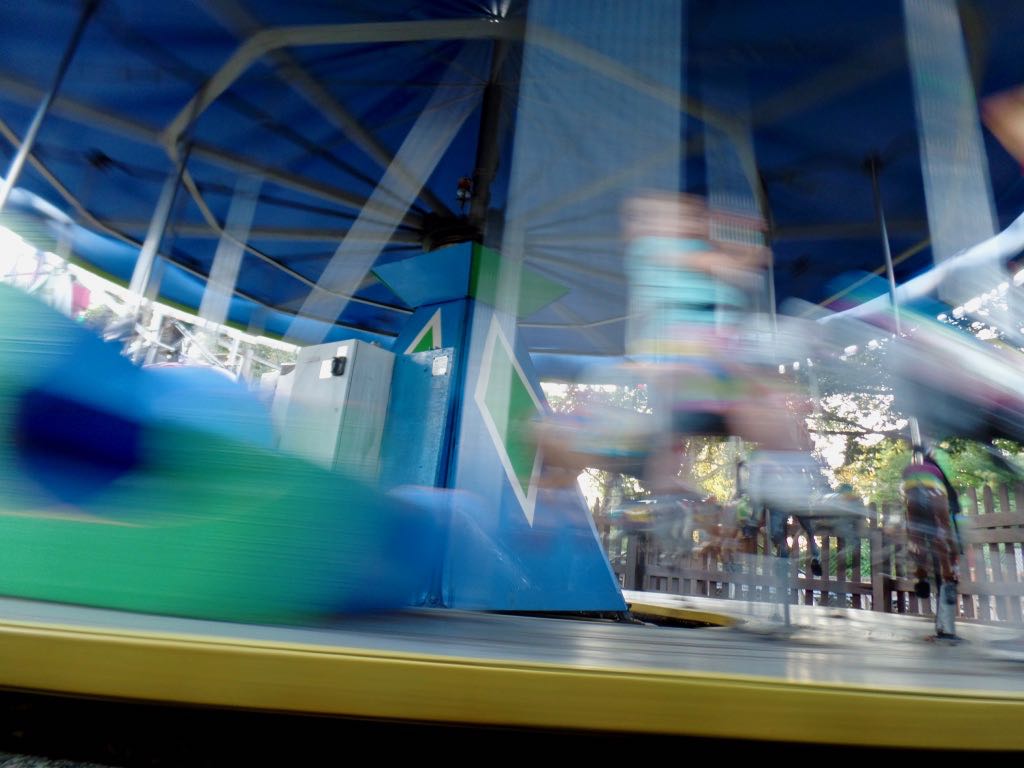 Kennywood's Kiddieland carousel but slowing down for the end of the ride. 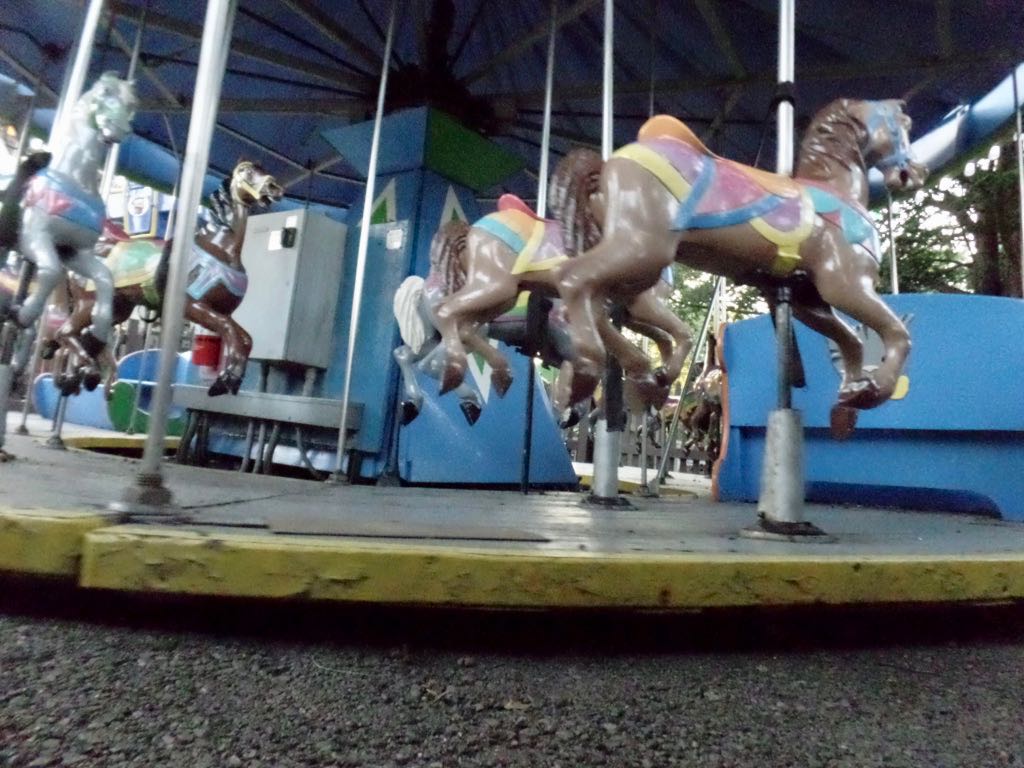 And here's the carousel, at last, at rest. Notice the cutout, rather cartoony, cat on the back of the chariot on the right there. 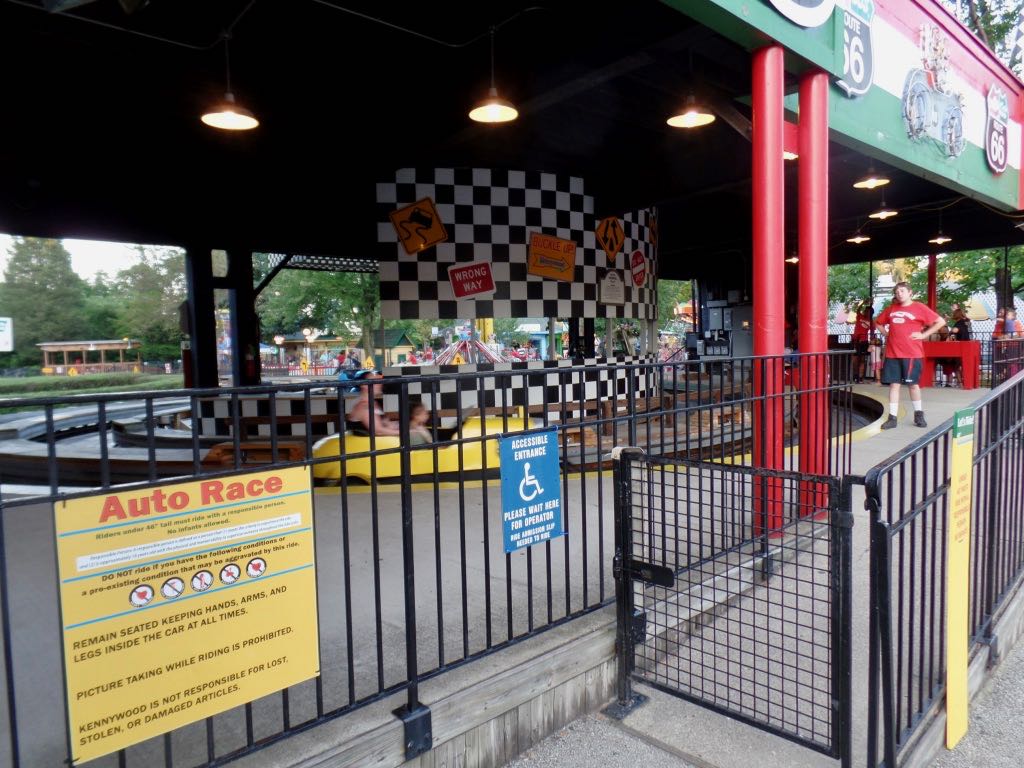 Station for the Auto Race, the antique-car ride. I can fit in the back seat of the car, too far away for me to have a hope of steering.