And we've gotten through some fresh stages in setting the house up for winter. One of them: getting the furnace inspected. This was done by the furnace company giving us an appointment for ``the afternoon'', like, between noon and five. It's the sort of thing I can do easily, since I work from home. It does leave me wondering what people who have normal jobs with normal schedules do for this sort of thing. They can't plan on furnace appointments for, like, their vacation days, can they?

Anyway the furnace is in fine enough shape and it's got a new filter now and everything. The one disappointing thing is that something in it had been producing a minor squeak which annoyed

bunny_hugger. It was this small but intermittent thing, like you might get from a fan belt that needs whatever care it is a fan belt needs to stop squeaking. I asked the furnace guy about it, shortly before declaring ``I guess I'll get out of your hair'' and leaving the basement. His verdict: there's no fan belts in the furnace. Also regarding the source of the squeak? He doesn't know. He said he'd never heard anything like that before, which is the sort of thing you want to hear from the person doing furnace work. But it doesn't seem to impair the furnace operations any. And at least the first night after this we thought the squeak was lasting a shorter time. We might need to get someone else in to look at things.

Also a disappointment: the furnace guy did not mention how we have a quite large rabbit. It was such a shocking thing to not say I didn't have anything to say in response.

Two days later, while moving the bookcase out of the living room so we have a spot for our Christmas tree, I must have bumped the thermostat or something, so the furnace just stayed off while the house slowly drifted into being chilly. Not that chilly; it was maybe 66 degrees rather than 70 when I took action. But there's nothing like a minor mysterious furnace malfunction (I really don't see how I could have messed up the thermostat) right after its annual inspection. Good times.

Trivia: The 17-episode contract for George of the Jungle budgeted Jay Ward studios $38,500 per show. Source: The Moose That Roared: The Story of Jay Ward, Bill Scott, a Flying Squirrel, and a Talking Moose, Keith Scott.

Currently Reading: Step Right Up, Folks!, Al Griffin. I believe like zero percent of the talk in this book about the jargon of amusement park operators but it's still fun to see these chunks of what's supposed to have been How They Talked Back Then. Also some little bits of the past being a different country, such as a casual mention of how miniature golf is basically dead except in some amusement parks that haven't given up the ghost. Also it's fun reading about what parks we've been to were like when the book was being researched in around 1972. Like, the list of rides and prices for Knoebels in the early 70s deserves to be preserved on a web page somewhere for reference.

PS: Some more along the train ride! 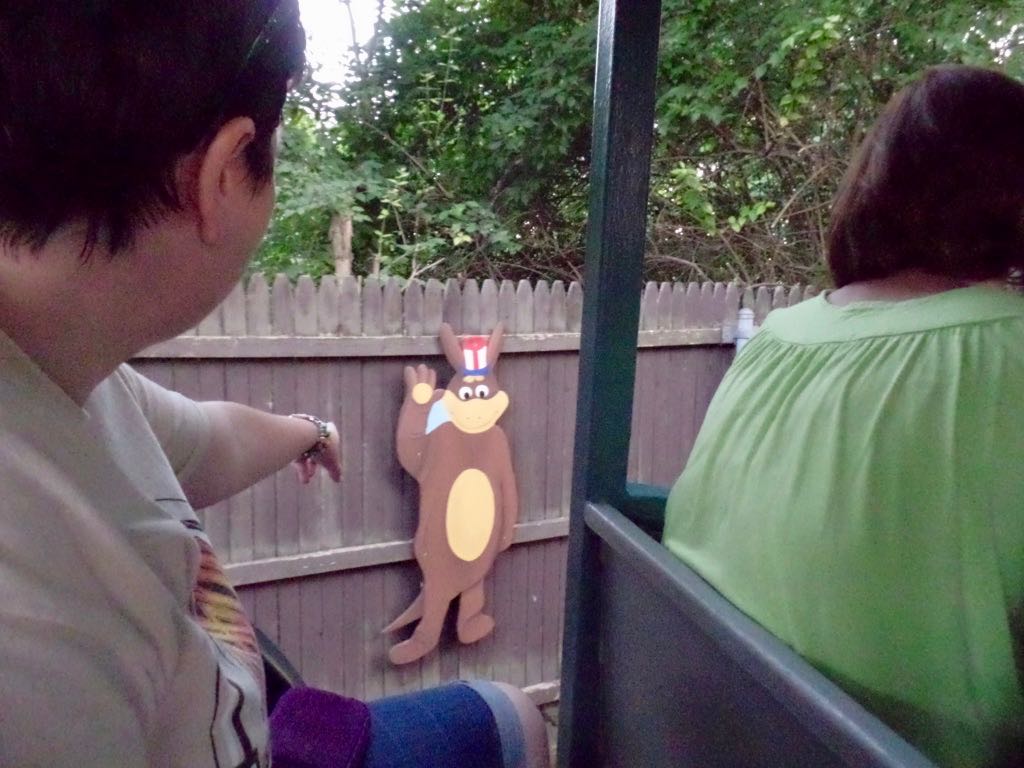 bunny_hugger excited to see Kenny Kangaroo, the main and all-to-rare mascot of the park! 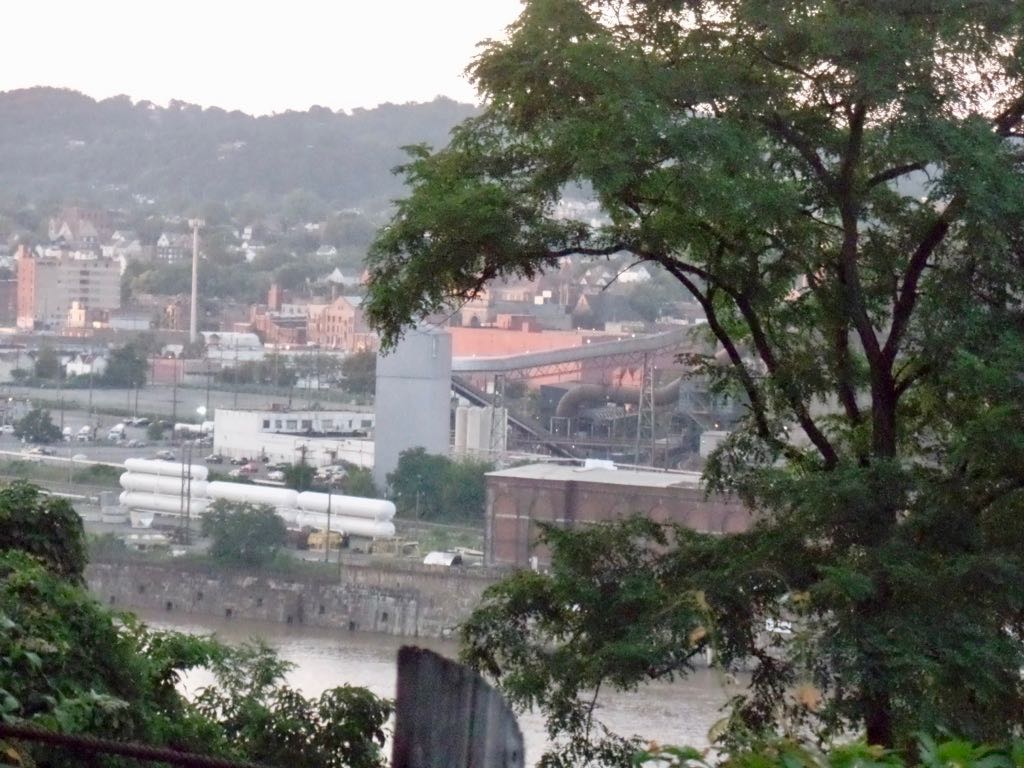 Coming back around and getting one last glimpse of industrial Pittsburgh as seen from the Kennywood train. 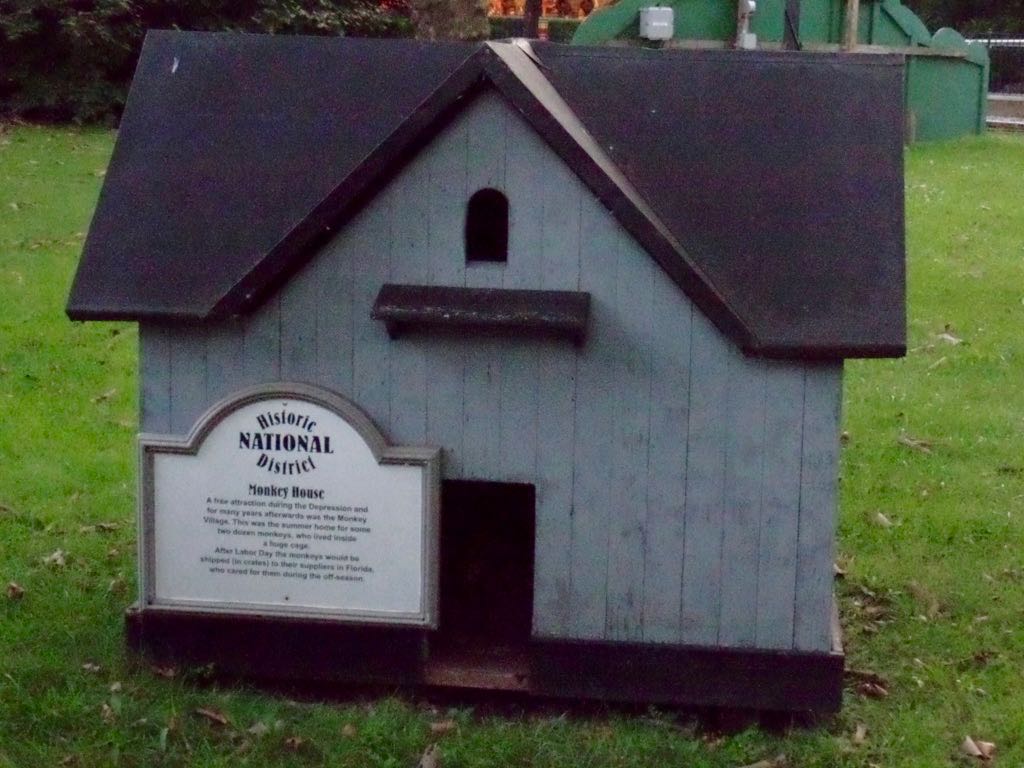 Oh, yeah, so, Kennywood used to have a Monkey Village, and here's one of the houses. They sent the monkeys to Florida for the winters.